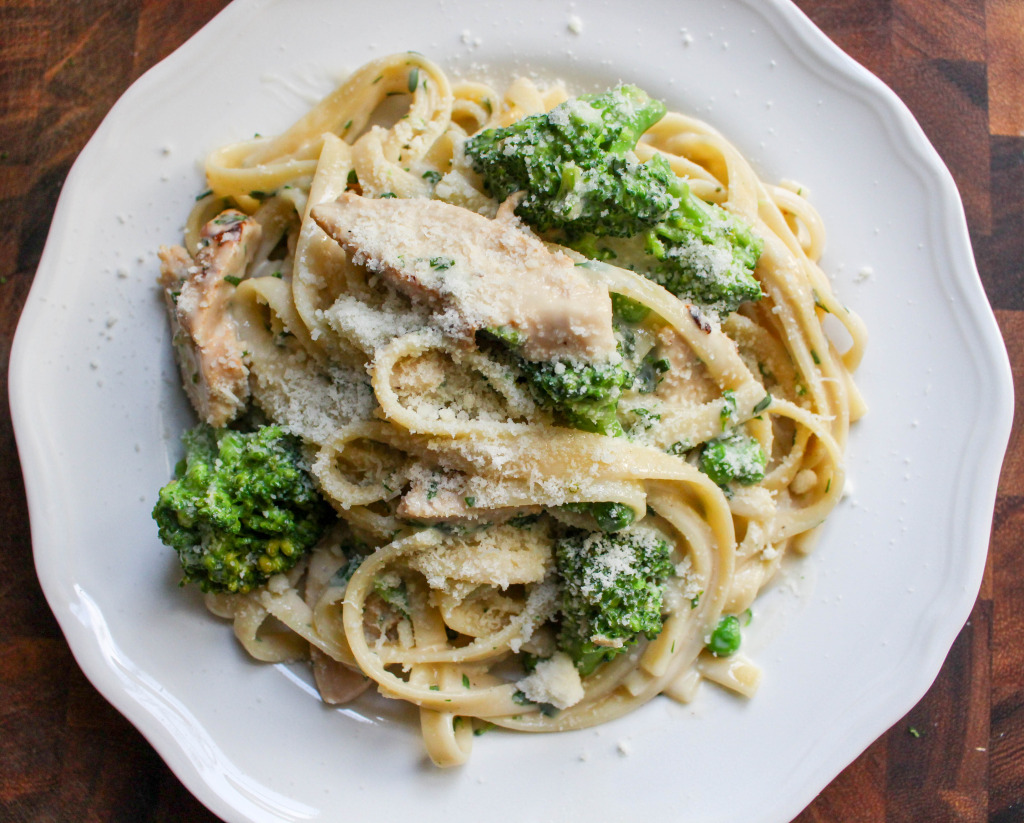 I have a weird pet peeve. I hate when recipes or foods are touted as “skinny.” Me = big ol’ hypocrite.

I don’t know what it is, but it irks me. I usually refer to such meals as “healthy” or “lightened up.” For some reason, though, this particular recipe really seems deserving of the designation “skinny.” I’m basically taking one of the most indulgent (and DELICIOUS) dishes, pasta alfredo, and slashing the fat and calories SO substantially, that I thought I could squeak the term “skinny” in there and be OK with it. I’m still on the fence. 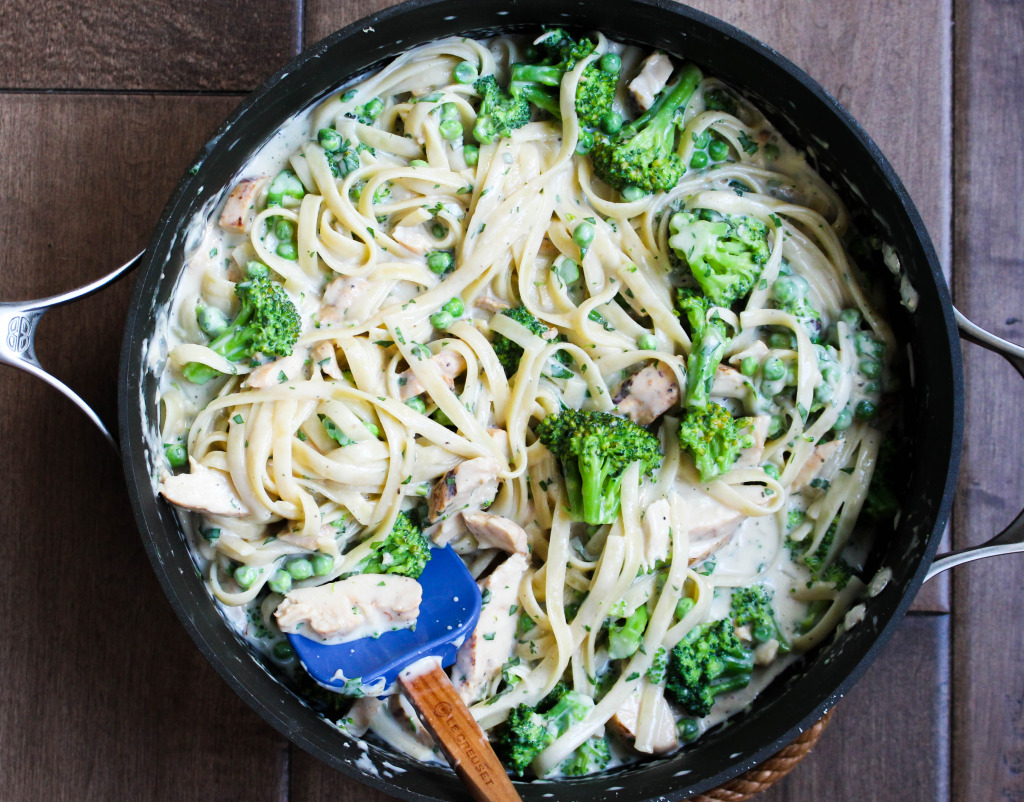 Despite my hang up about how to refer to this recipe, one thing is for sure: this pasta dish is ridiculously good.

The hubs’ favorite pasta of all time is chicken alfredo over fettuccine. If we go to a certain Italian restaurant chain (rhymes with Schmolive Pharden), which is not often, he ALWAYS orders the chicken alfredo. Every single time without fail. He won’t even look at the rest of the menu. I’ve made it for him at home a couple times over the years, but admittedly, I have a hard time justifying the fat and calories found in that dish. In all its buttery, carby, cheesy, heavy-creamery glory…it’s basically a diet buster on every level. Delicious but downright sinful. 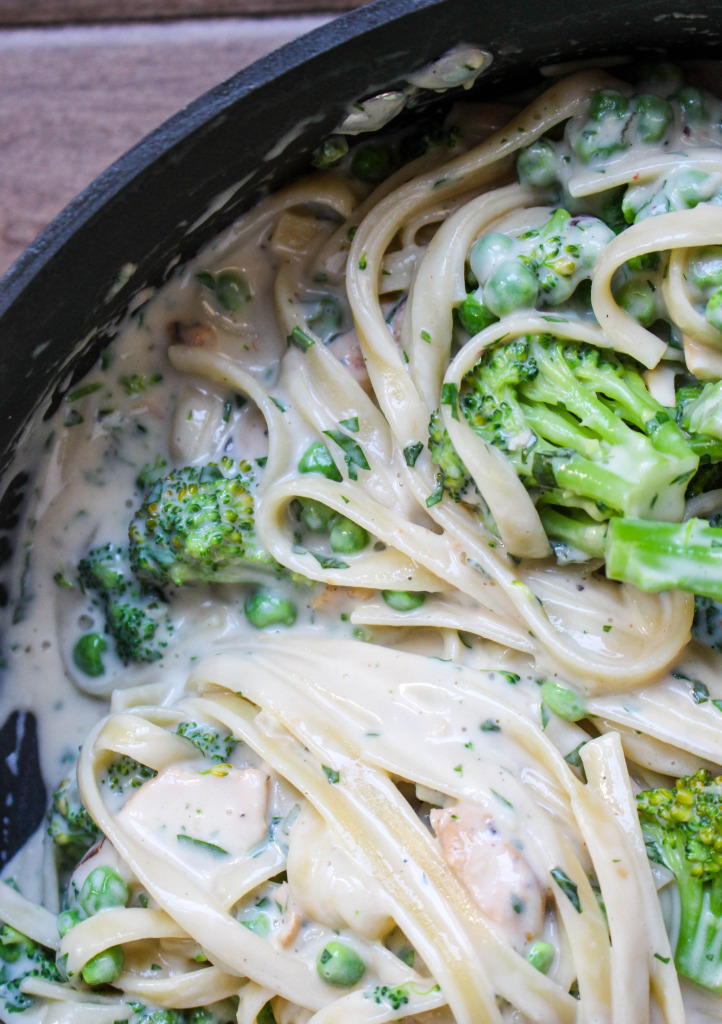 Because it IS one of Dan’s favorites, though, I knew I had to come up with a way for us to enjoy it without feeling like beached whales afterward. Enter this recipe and the wonders of low-fat evaporated milk. The stuff is pretty amazing and can be used in a million different ways (my favorite: in place of heavy cream and half-and-half in sauces like this one). You feel like you’re eating something rich and creamy but with only a fraction of the fat and calories. Love that. 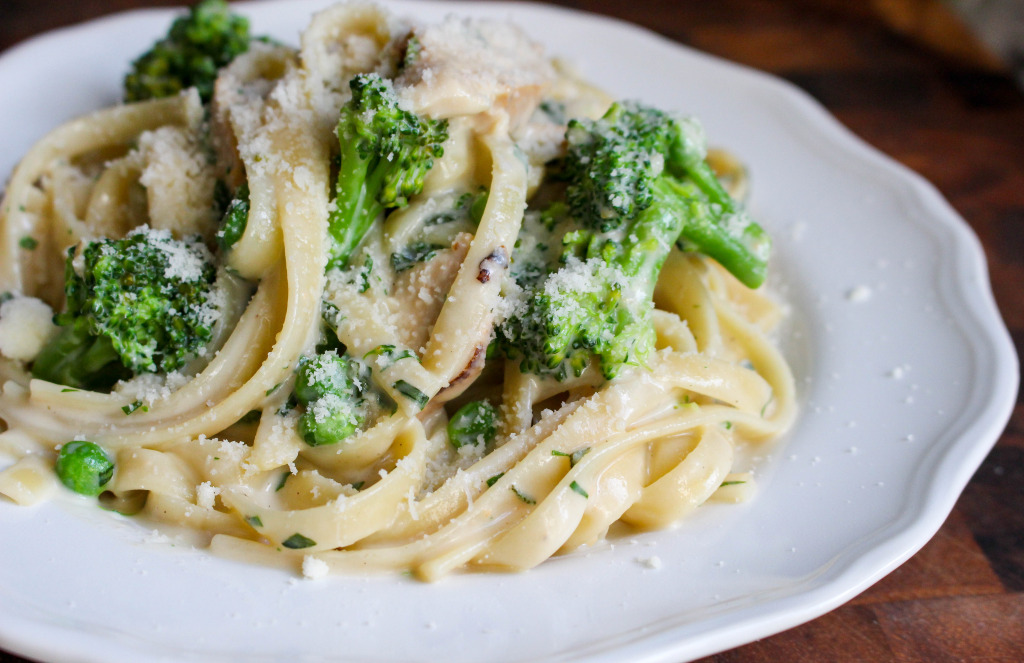 Instead of doing a straight-up alfredo sauce consisting of milk and cheese, I wanted to tweak things a bit by adding in a bunch of fresh herbs, some veggies, and Dan’s favorite: chicken. The result was surprisingly fabulous! Sure, not exactly what you would get at Schmolive Pharden, but damn close and equally as delish.

No matter how you want to refer to this dish…skinny, lightened up, healthy…whatever… know that it tastes just as indulgent as the real thing and can therefore be added to your regular rotation. Dan gobbled it up and went out of his way to tell me how good it was. He even went back for seconds. Considering his alfredo obsession, I’ll place this one in the win column. 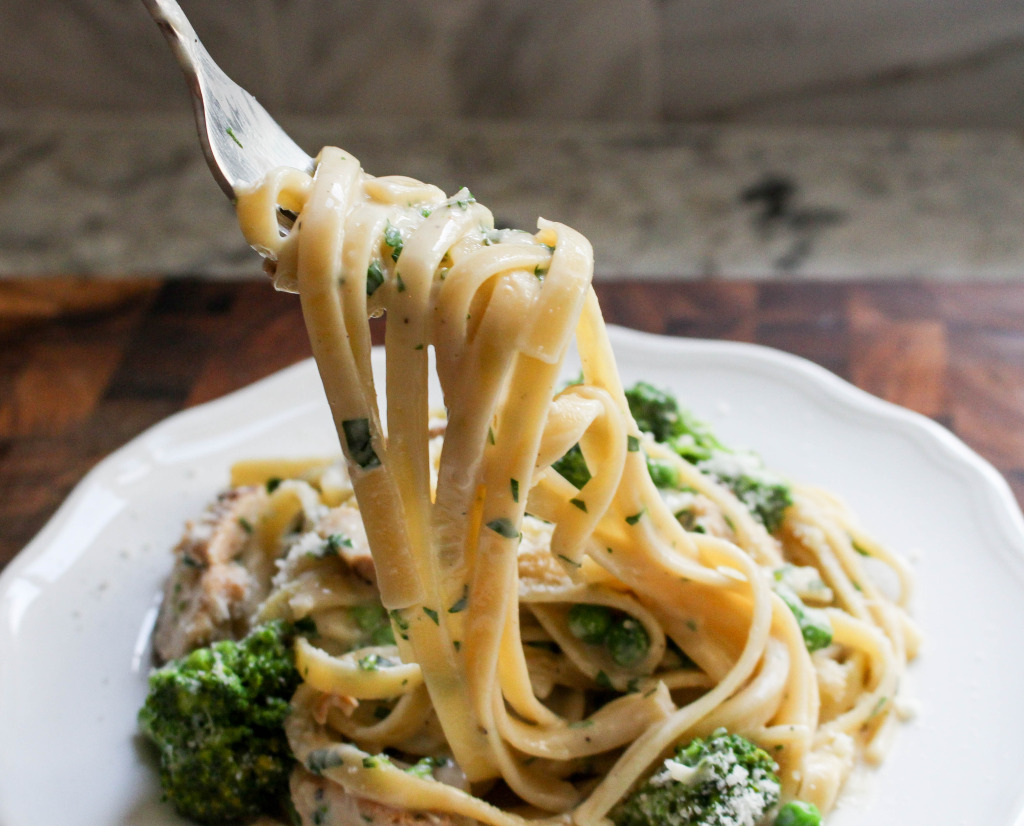 1 lb dried or fresh pasta of choice (I used fettuccine)

1 head of broccoli, stemmed and cut into florets

Bring a large pot of salted water to a boil. Add the pasta and cook until el dente, according to package directions. During the last minute of cooking, add the broccoli florets to the same pot.

While the water comes up to a boil, make the sauce by melting the butter in a medium saucepot and adding in the garlic. Sauté the garlic for 1 minute and then whisk in the flour. Cook for another minute. Slowly whisk in the evaporated milk and regular milk and cook, stirring frequently, until the mixture thickens. Add in the cheese, herbs, and nutmeg. Season, to taste, with salt and pepper. Keep warm until the pasta is ready.

Toss the pasta and broccoli in the sauce as soon as they are done and add in the frozen peas (no need to defrost) and cooked chicken. Toss to combine. If your sauce is too thick, stir in a couple more splashes of milk and toss until creamy and incorporated. Serve immediately, garnished with additional cheese and herbs, if desired.