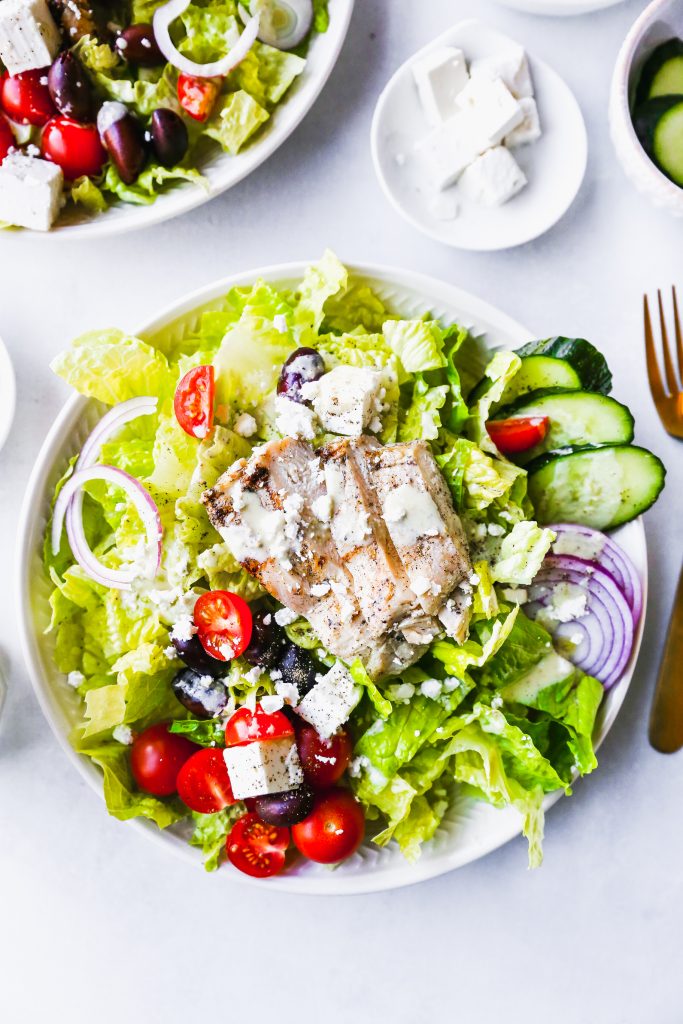 I’ve been holding out on you.

I’ve had this recipe in our regular rotation for months now, and I have no idea why it has taken me this long to jot it down to share with you all. 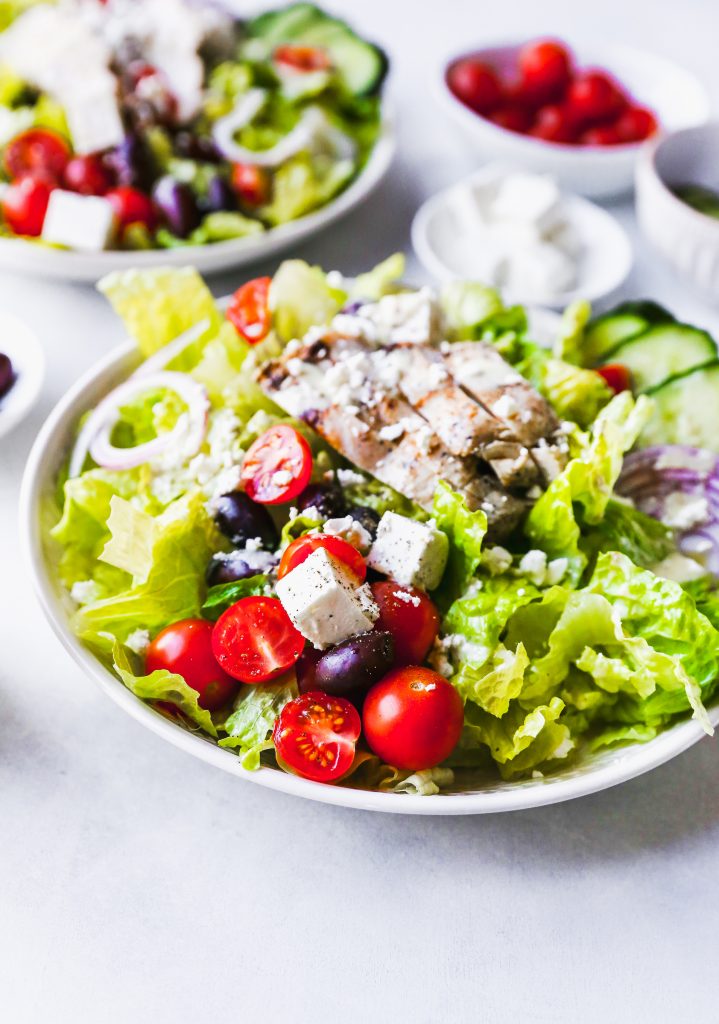 In my defense, I originally planned on sharing this recipe with you almost a month ago (back in January when everyone is all about the green smoothies and salads), but then I got sick. And the thought of salad was horrifying. I barely ate for the month of February, guys, and when that happens, the exact last thing in the world I crave is SALAD.

But! I’m better now, and this salad has been in this week’s nightly rotation. And now I’m finally sharing it with you all! We all win.

This salad is so great mainly because it’s SO EASY. I often prep the ingredients once (usually on a Sunday or Monday), and then our weeknight dinners come together in minutes. I looooove when that happens. You can keep this really simple and use pre-cooked or rotisserie chicken from the store, or you can roast off a batch of chicken early in the week to keep your weeknight life easy peasy. Depending on my level of laziness and how many other recipes I have planned in a week, I do both. Rotisserie chicken from the store IS one of life’s greatest pleasures, after all. 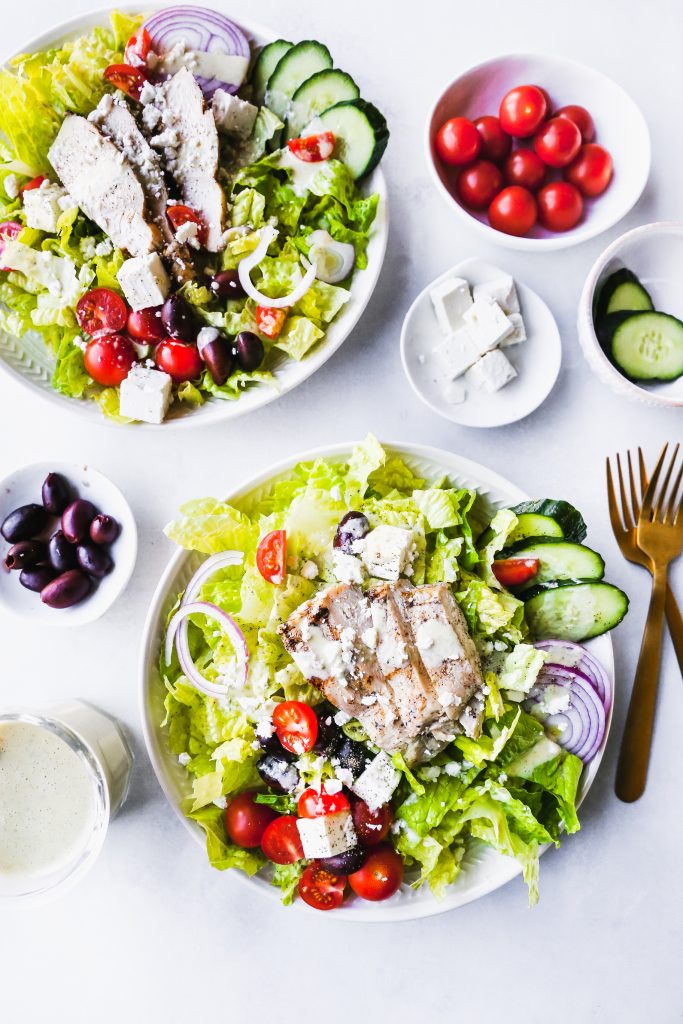 The salad itself is pretty straightforward. I’m not going out on any crazy limbs here. We have a ton of romaine, which is my favorite salad lettuce. It’s crispy and crunchy and refreshing! I love it and really do use it in 95% of the salads we eat at home. Then come the tomatoes! And cucumbers! Kalamata olives! Red onion! And feta cheese. Of course.

Do yourself a favor and invest in some really good Greek feta for this recipe. Because the recipe is SO simple, it’s important to use the absolute best ingredients. And true Greek feta cheese is where it’s at. Trust me. You’ll never go back to the packaged feta again. 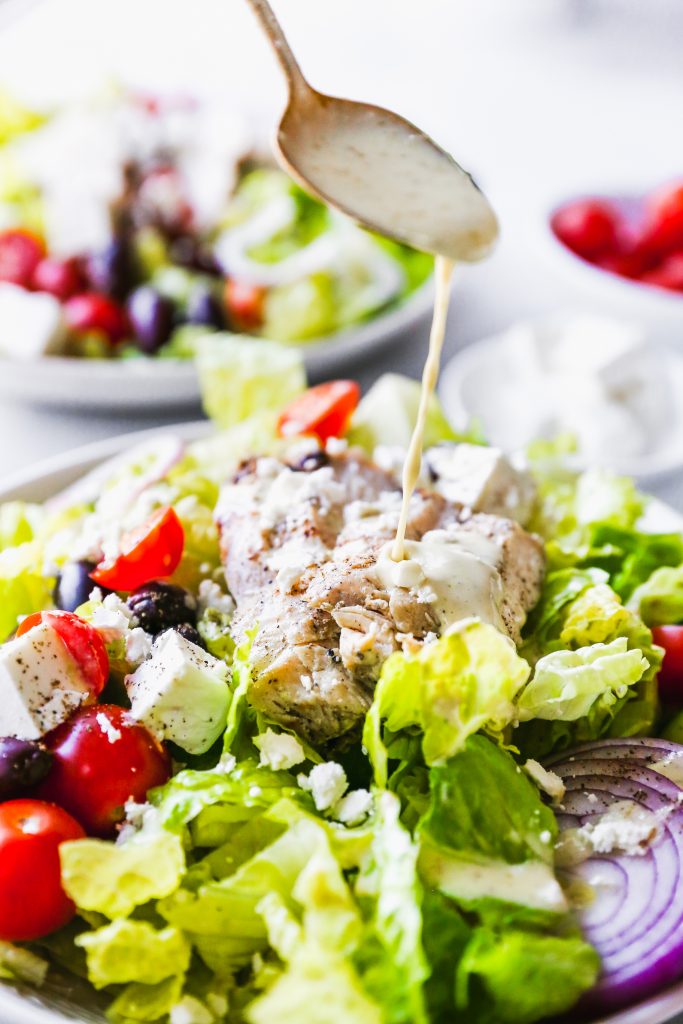 The one place I DO switch things up is with the vinaigrette. Instead of doing a classic Greek dressing, which is usually oregano and lemon based (and something I also LOVE), I am spicing things up a bit.

I loooooove pepperoncini peppers. I credit that to the fact that I am pretty much obsessed with anything pickled, brined, or vinegar based. I could eat a jar of pickles in one sitting. I don’t, but I absolutely could. So! Pepperoncini peppers are high on my list of yummy pickled bites. I love them in salads like this one, or on top of pizza, or on sandwiches. They are just teensy bit spicy but pack a punch of flavor! I adore them. 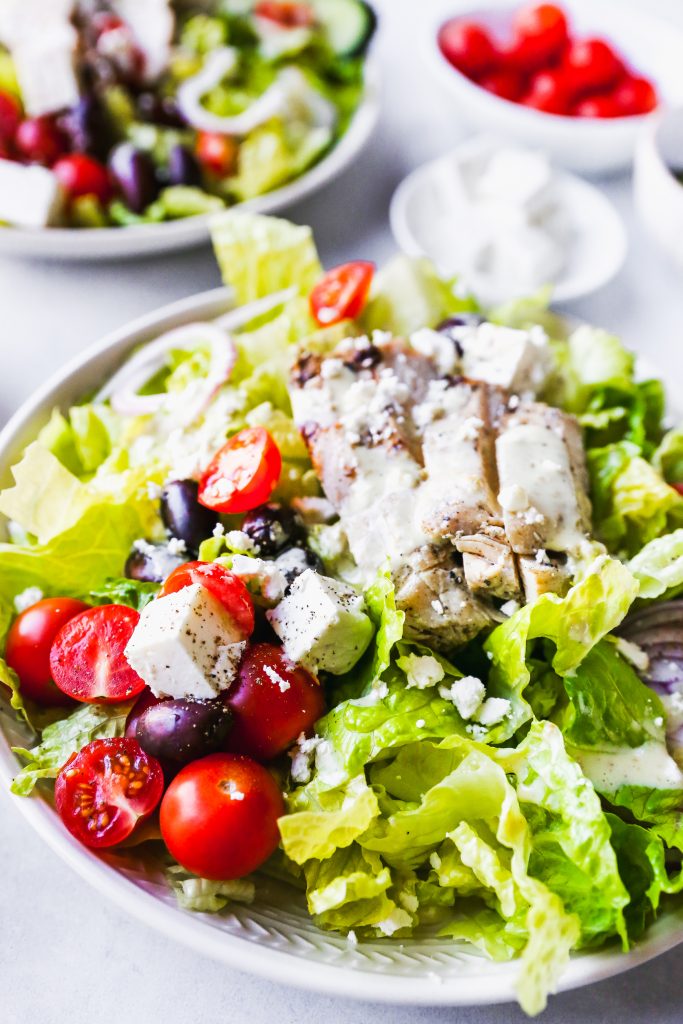 So! I decided to make them into a salad dressing. I’ve been making this vinaigrette for months now, as I said previously, but it has sort of evolved over time. It tastes a touch different every time I make it. And that’s probably because I rarely measure my salad dressing ingredients. I almost always eyeball things. The recipe below is what I did this most recent time (I actually measured), and it came out perfectly tangy, salty, and a touch sweet! Just how I love my dressings.

It comes together in minutes in the food processor. I tried making this in my high-powered blender, and I have to say, I think the food processor does a better job. Also! If you like a chunkier dressing, feel free to just chop the peppers by hand and whisk everything together in a bowl. Totally up to you!

Everything gets tossed together in all it’s tangy, delicious glory. 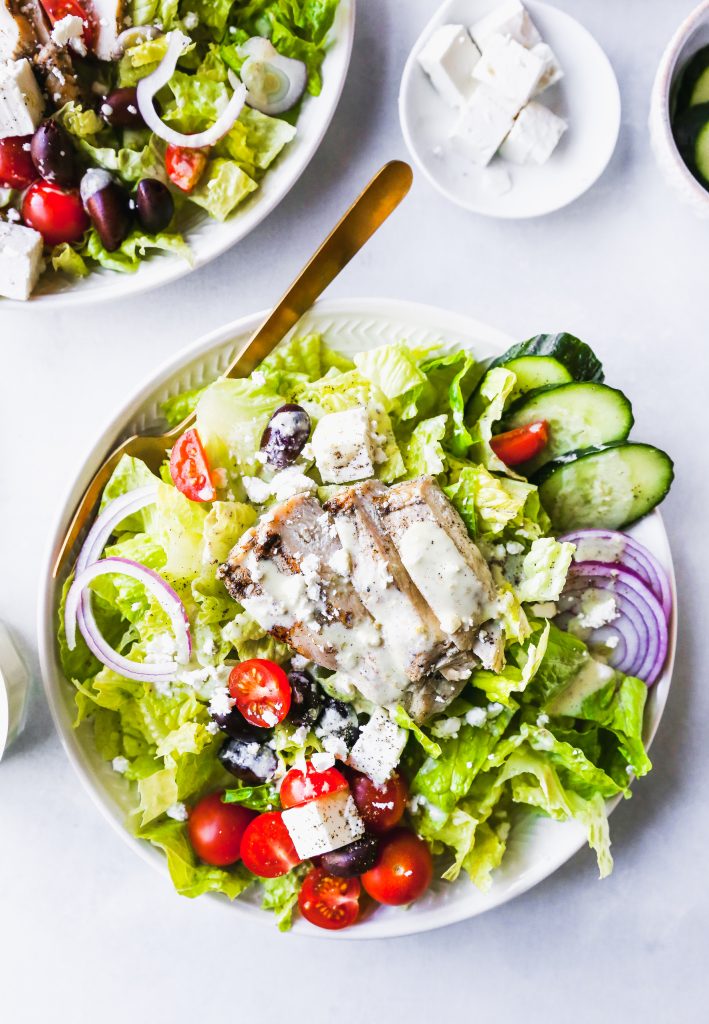 And dinner is served!

Leave a Reply to Melissa | Bless this Mess Cancel reply