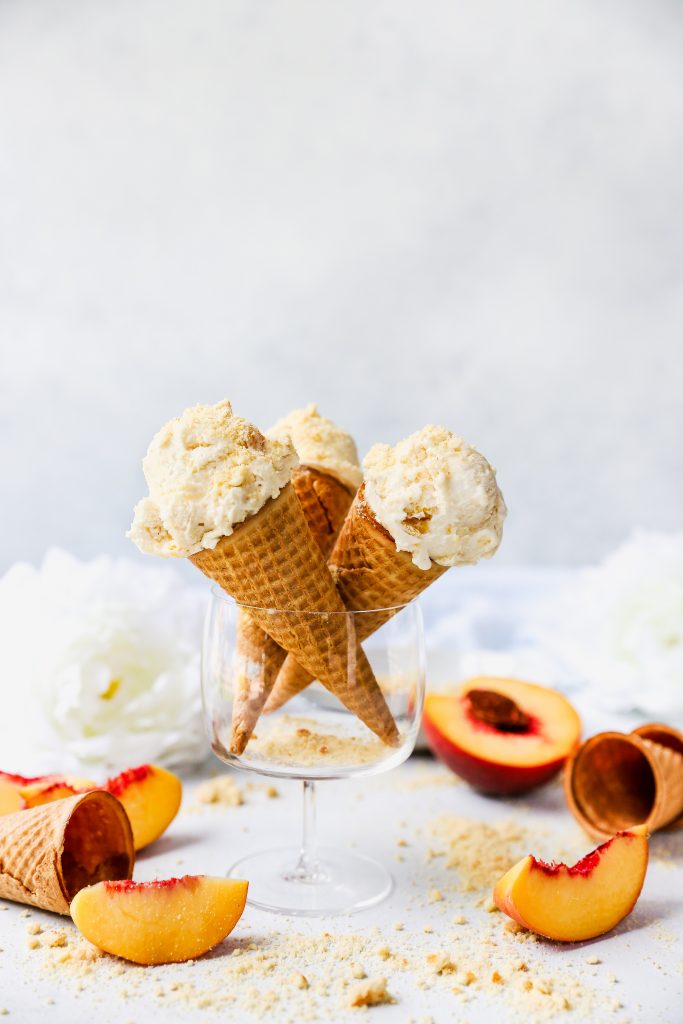 Summer Fridays call for ice cream, don’t you think?! Either that or margaritas. Or both. 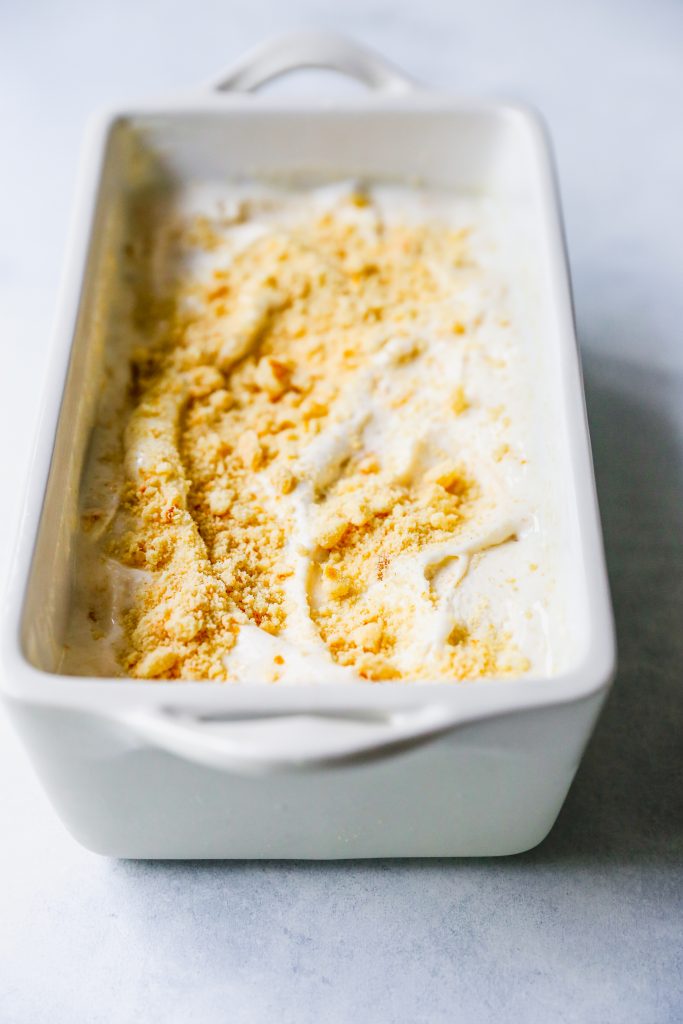 I can’t believe I made it this far into summer (mid August!) to share an ice cream recipe with you all. It has been A MINUTE since I shared a recipe for homemade ice cream, which is so weird because it is one of my favorite things to make in the summertime. 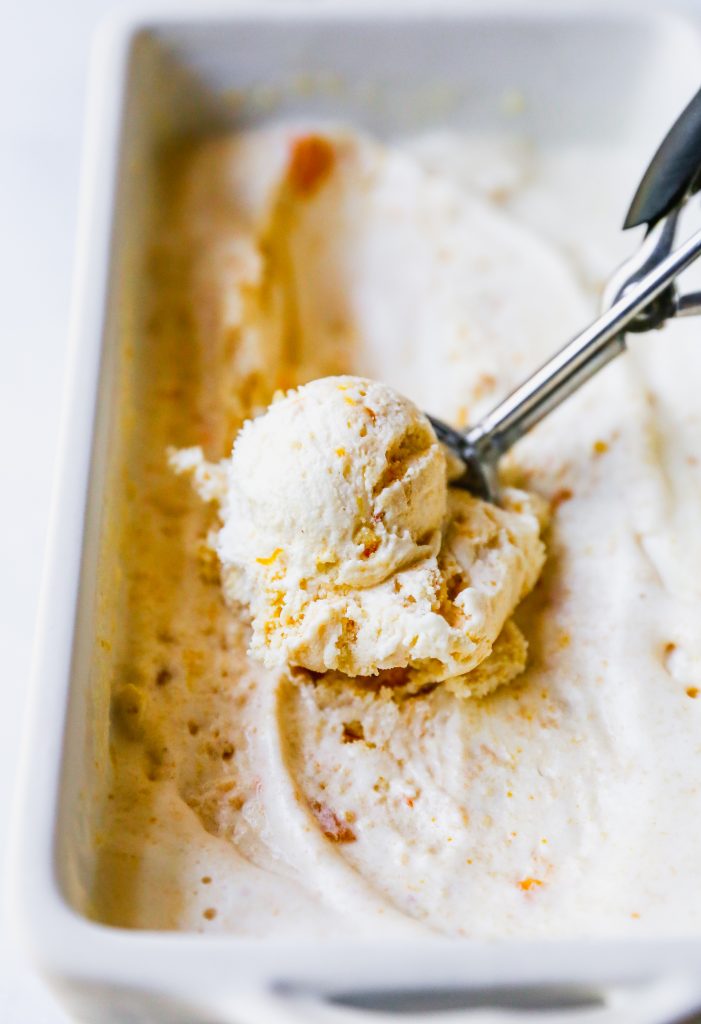 Especially with the abundant and delicious summer fruit! 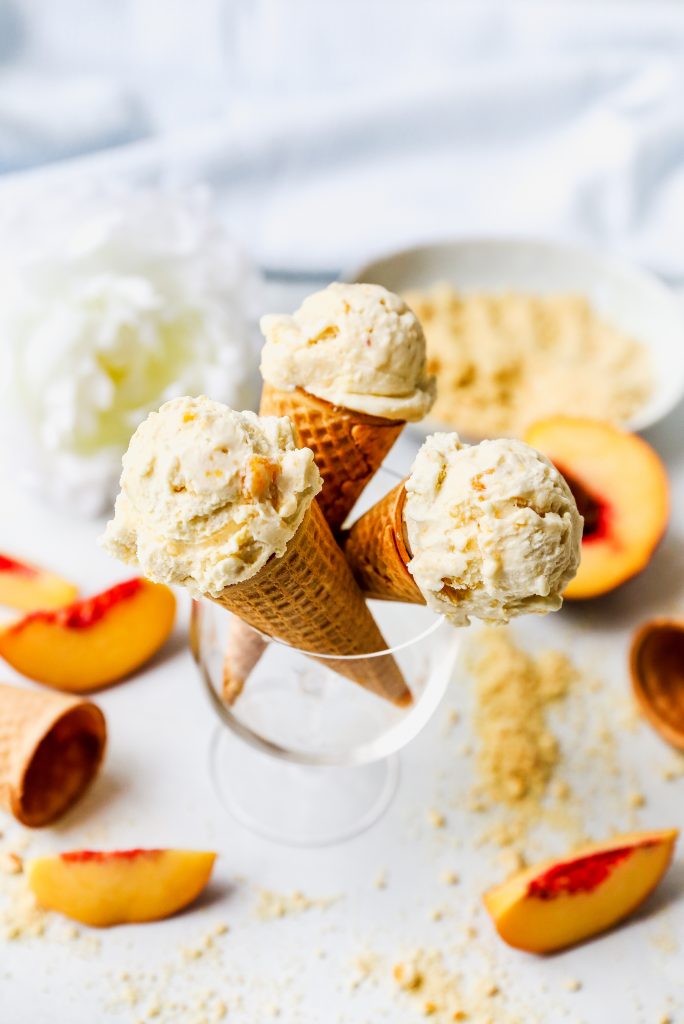 Specifically, peaches. OMG. The peaches right now are so, so good. Juicy, tender, and unbelievably sweet. I’ve been buying them by the dozen these past couple weeks, and they are the best mid-day treat. 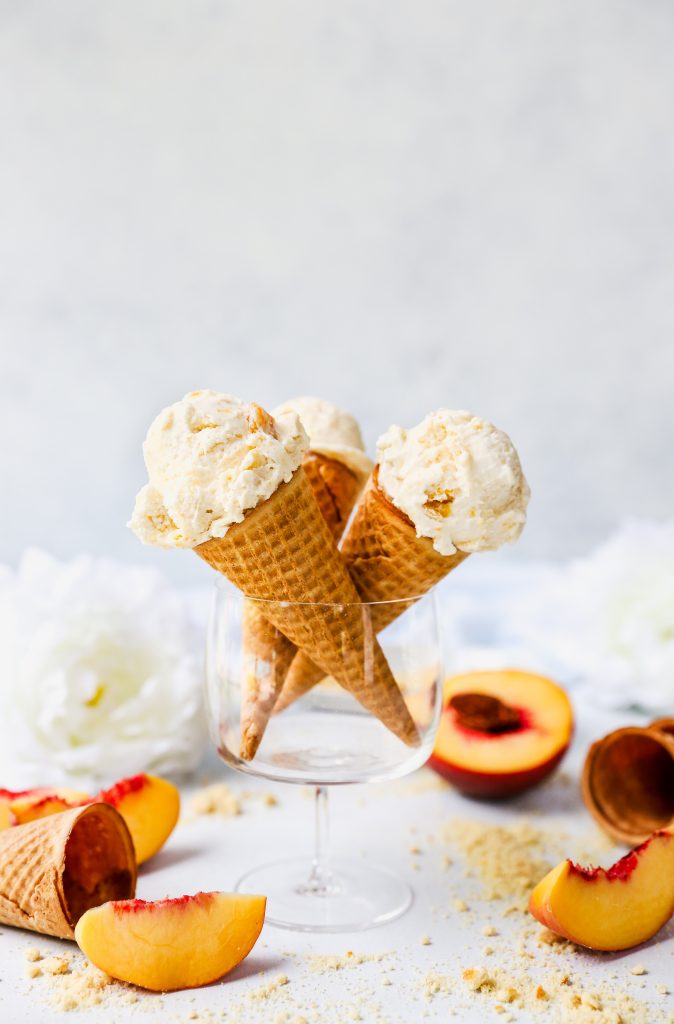 This summer is going by SO fast. I know I say this every year, but I feel like June and July just evaporated. And I’ve been slacking on the summer cooking! It’s really strange. For the first time ever, I haven’t been in the mood to cook as much lately. I’ve hardly cooked with summer produce, either, which feels like a cardinal sin. Dinners these days have mostly consisted of caprese salad (I guess that counts as summery, huh?) and cheese and crackers (an old standby in my life). 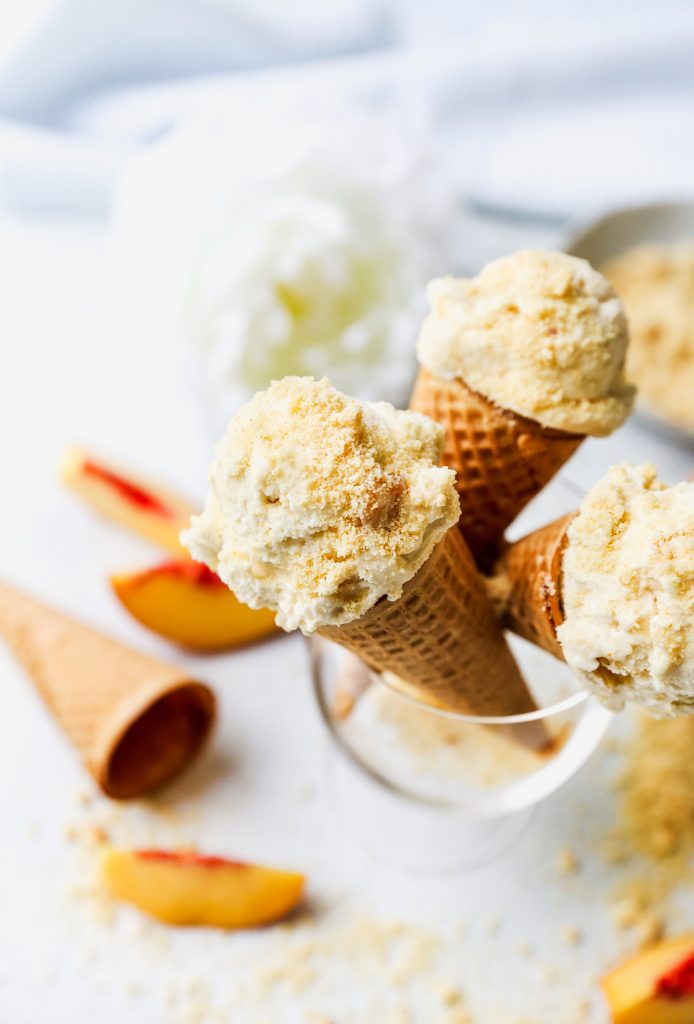 June started off with my sister’s wedding and was followed by a vacation in July, which is why the summer feels so fleeting, I think. Secretly, when August rolls around, I am starting to get the fall itch. Not full blown or anything, but fall is my absolute favorite time of the year, and I start to look forward to it around this time every summer. It’s like I’m stuck in a weird place of “nooooo summer don’t end and yesssssssssss faaaaaalllllllll.” 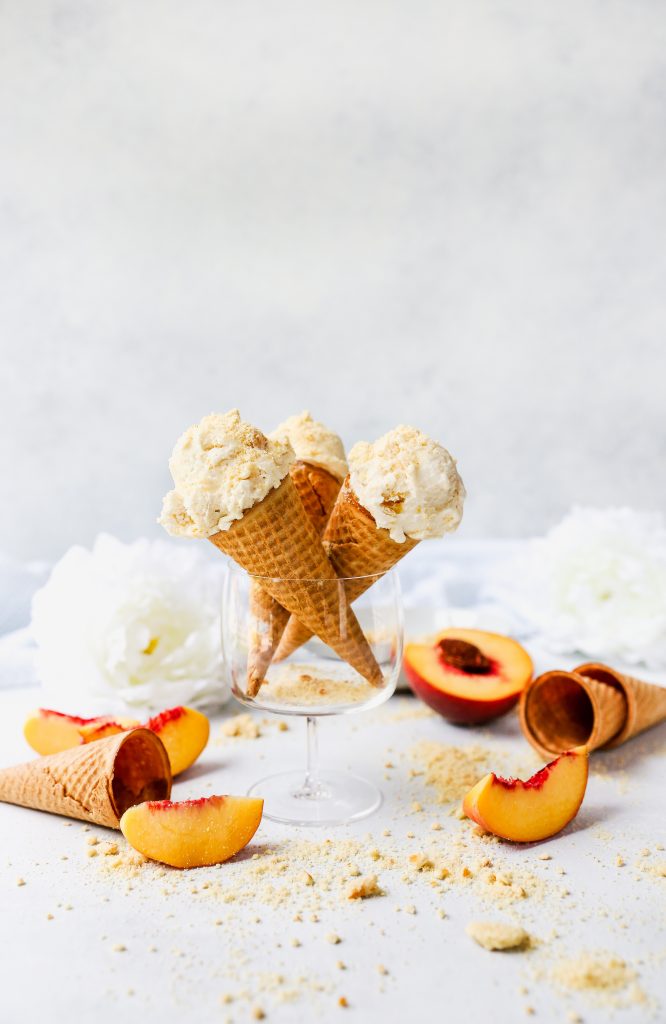 I’m hear to remedy my recent slacking, though! With peaches and cream ice cream! With a shortbread cookie crumble running throughout!

That totally makes up for things, right? Right. 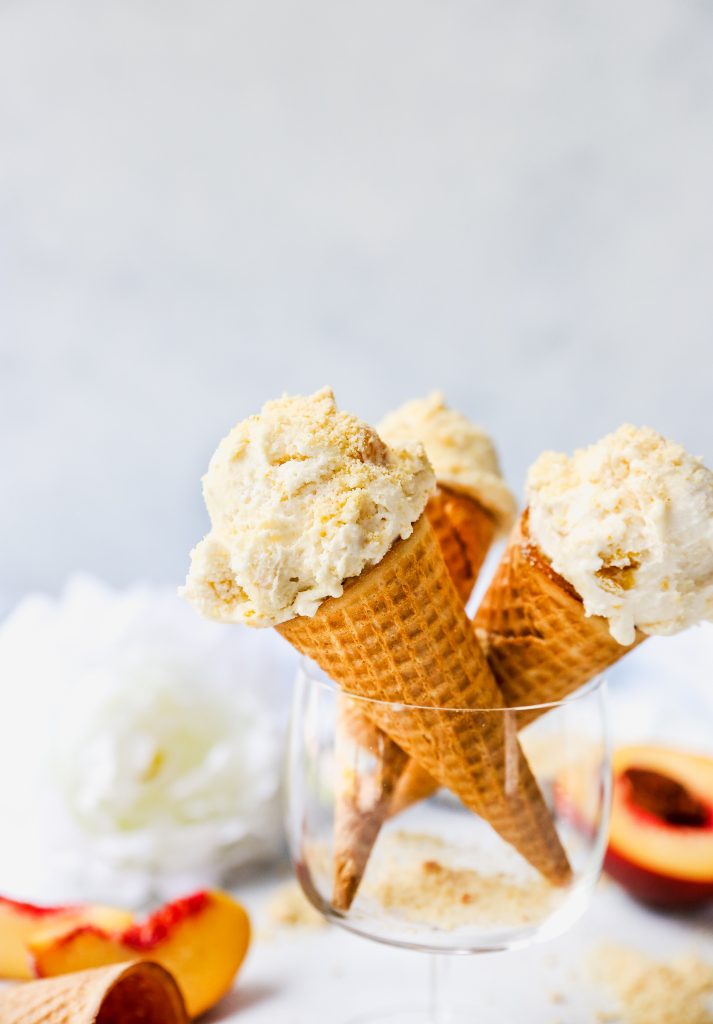 So, this ice cream is pretty straightforward. I follow my basic ice cream recipe/method of heating cream, milk, sugar, and eggs together until thick, creamy, and custardy. I flavored this batch with lots of vanilla and fresh, juicy peaches. I like to puree the peaches a bit because it really makes the whole situation taste more peachy, but you can treat it however you like. I pureed mine in the food processor until they were mostly pureed with a few little bits left, just because those are such fun surprises when you eat the ice cream later. 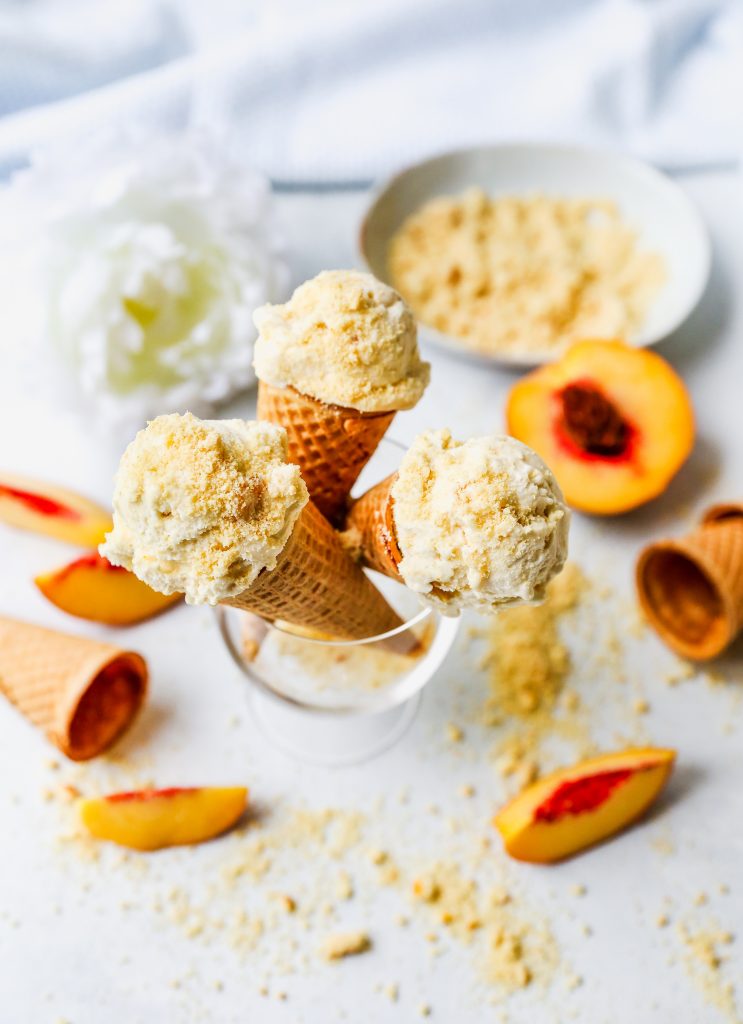 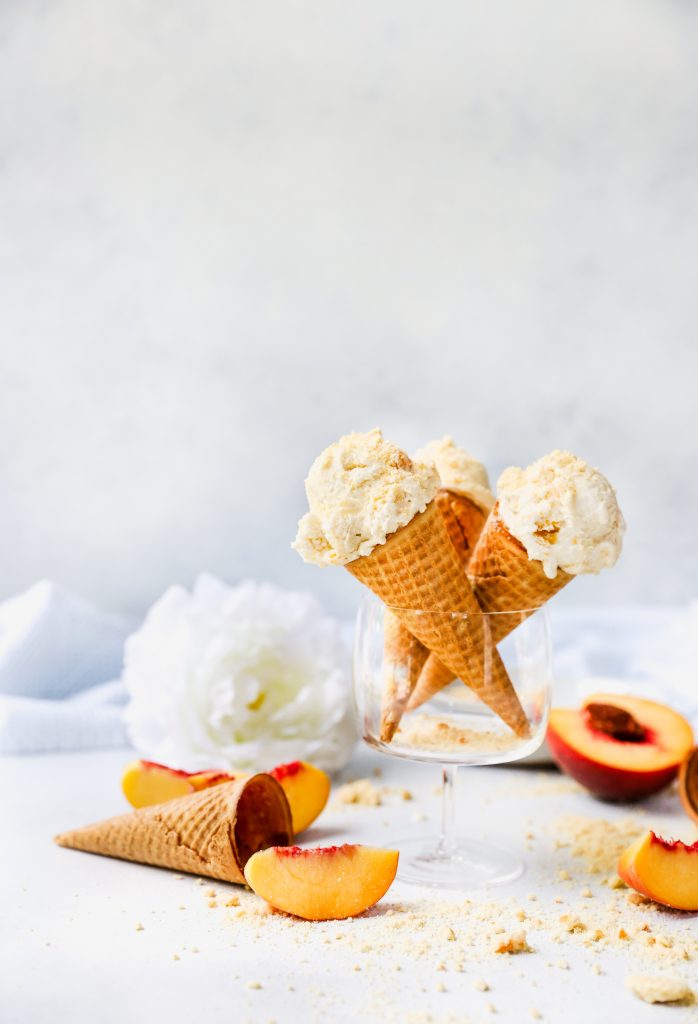 The peachy custard gets chilled and then churned in an ice cream maker until thick and dreamy. Right before the ice cream is done churning, I pulsed some store-bought shortbread cookies in the food processor until they were crumbly and stirred them into the ice cream! Not only does it add a yummy, almost pie-like flavor to the ice cream, but it adds the most amazing crunchy texture. And I neeeeeed texture in my life.

This ice cream is straight-up delicious. Creamy, sweet, peachy, and perfect for a summer evening treat. It totally has me inspired again to get back in the kitchen! I already have two other peach recipes that I am going to start testing today, so get ready for peach overload. 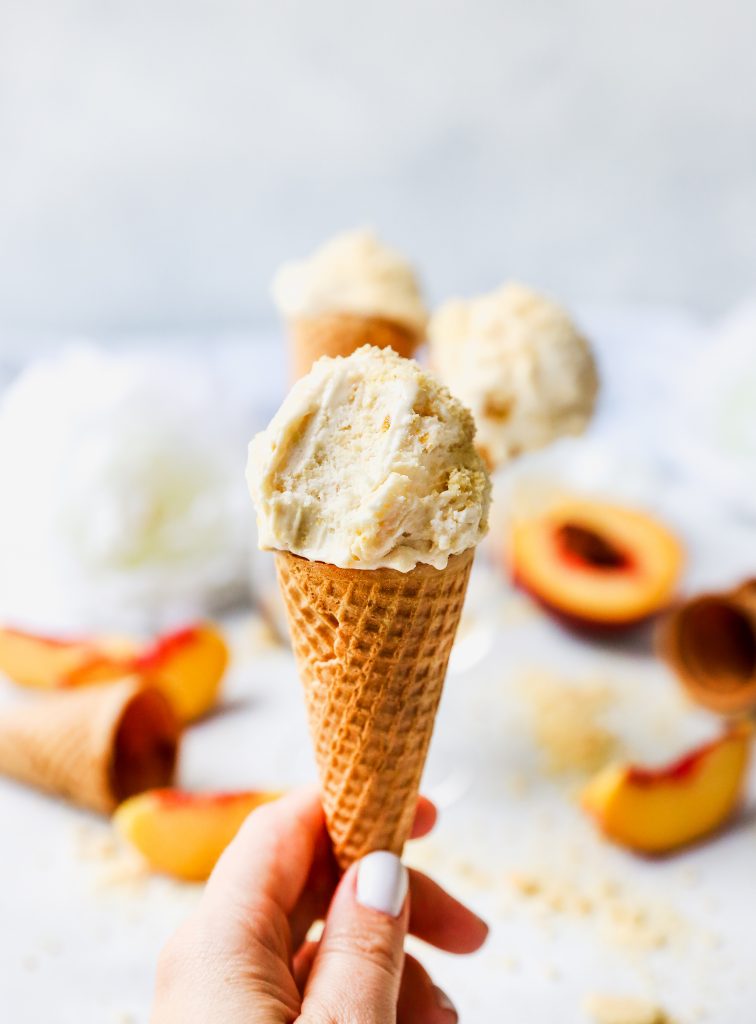 Let’s get it in before September is here, though! You know it will be here in a blink! 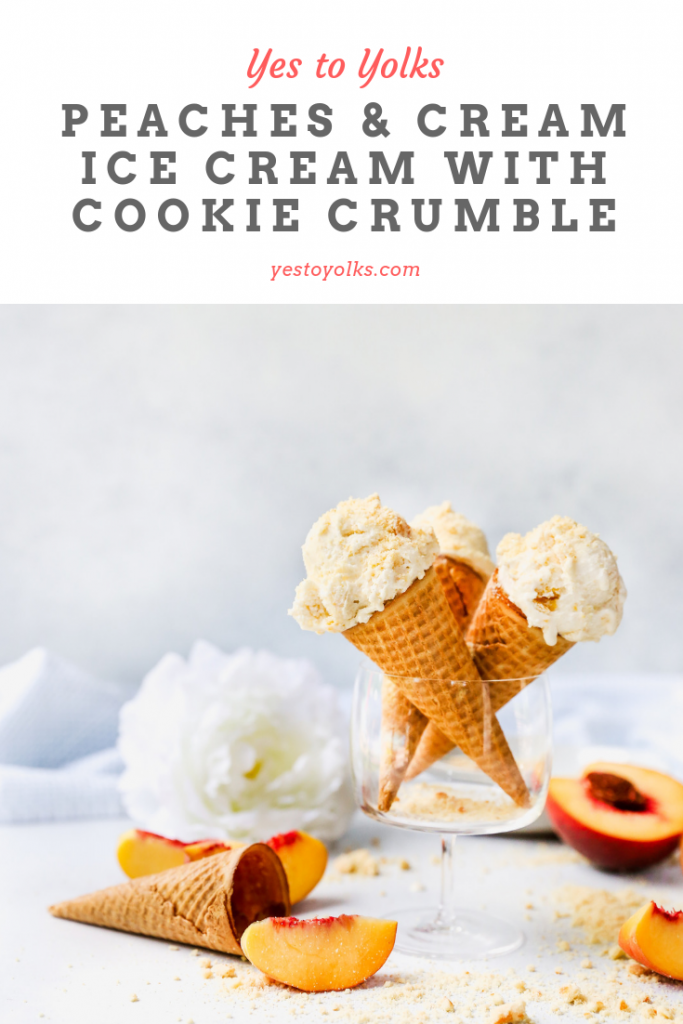