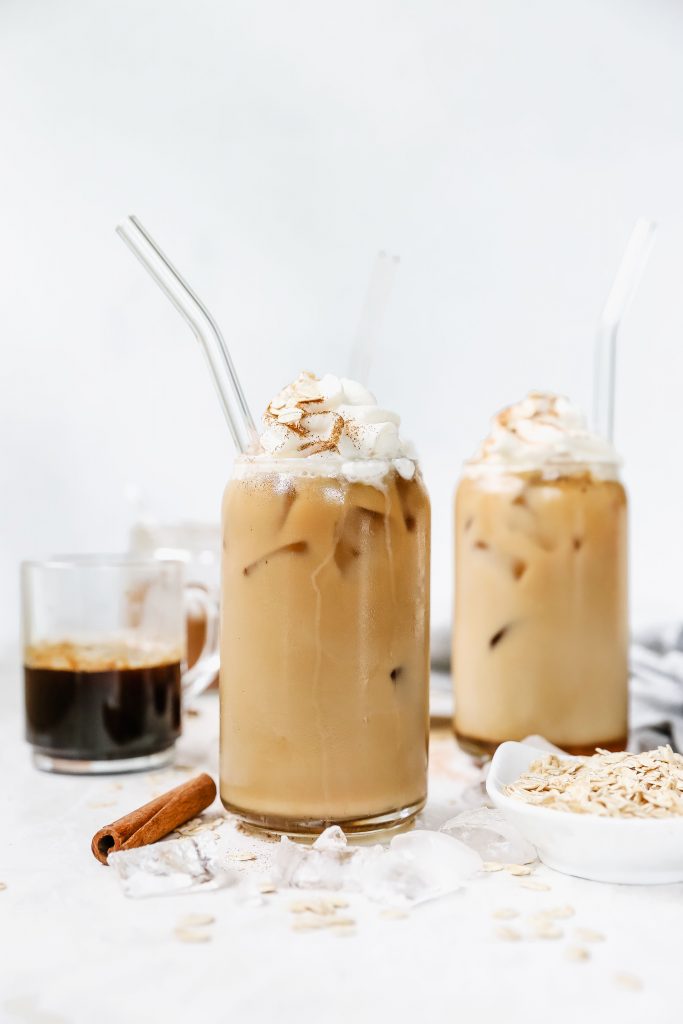 Say hello to my new favorite way to start the day.

If you’ve been reading along for some time, then you already know that my morning coffee is almost a religious experience. It is, hands down, one of my favorite parts of the day, and I refuse to sacrifice in this area of my life. 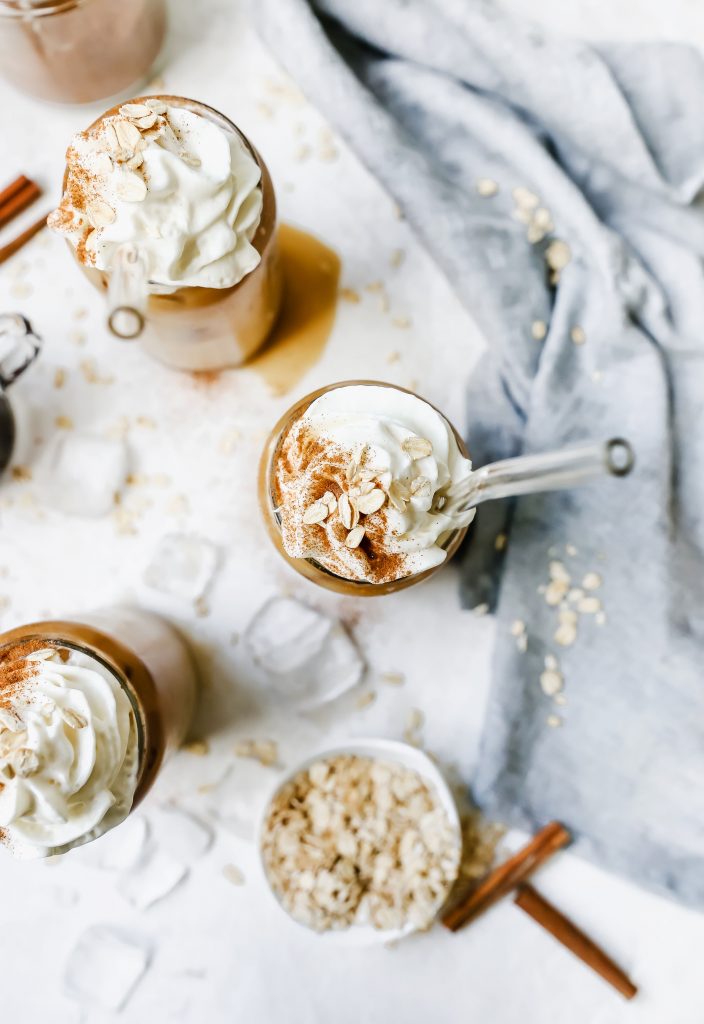 Meaning, if I want hot coffee, you better believe just about everything else is going on hold while I drink a piping hot cup of freshly brewed joe. No stagnant, semi-cold coffee here. If I want my coffee to be indulgent, you better believe I’m not worrying about the calories. I load it up with whatever I’m craving because I LOVE MYSELF. It’s one of my special “me” moments, and I can’t imagine starting the day without a cup of coffee. It is a must. 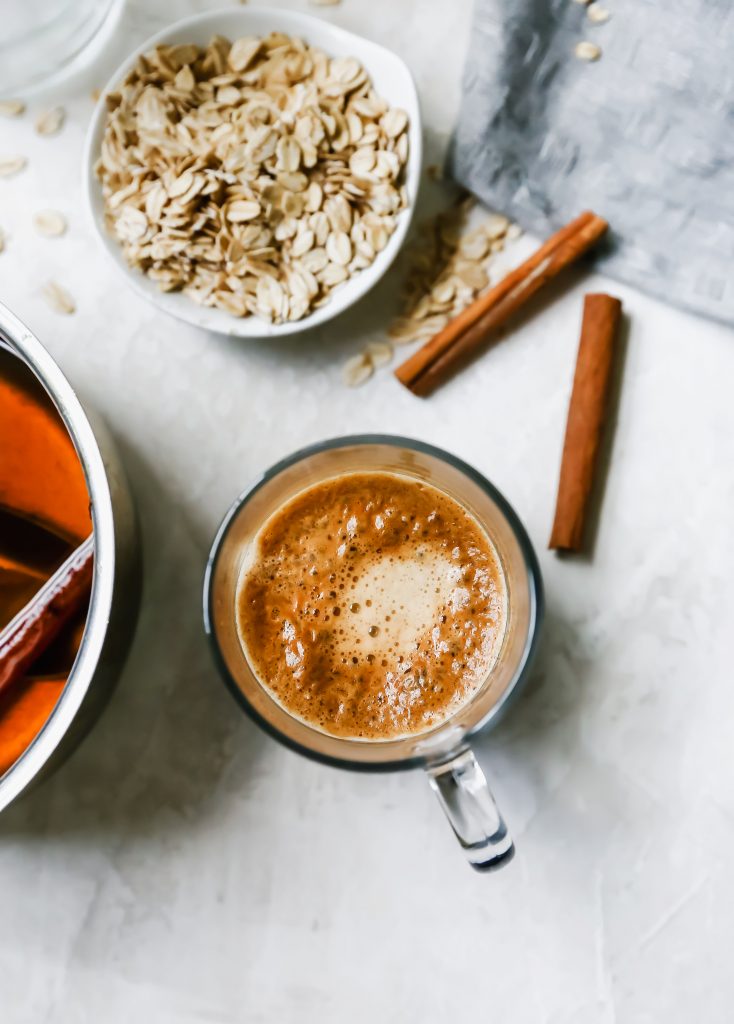 Because I treasure it so, I’m always on the hunt for fun and new coffee traditions. While my ideal cup of coffee is both sweet and creamy (but not too much of either), I must admit that I do not like nut milks in my coffee. Nope. Almond milk just doesn’t cut it. And believe me, I’ve tried to make it work. But I refuse to sacrifice my enjoyment and the good-intentioned almond milk creamer was short lived. I love cow’s milk products (that sounds so odd) in my coffee. Sue me. 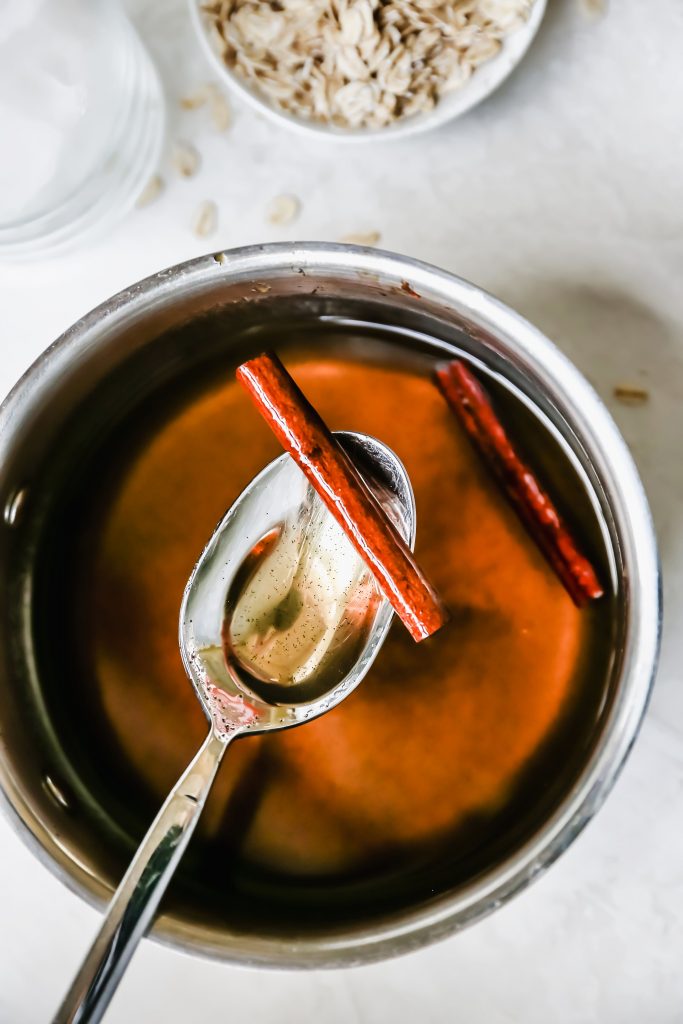 Oat milk is having a major moment right now. It’s everywhere. It’s the new cashew milk. And guess what? I LOVE IT.

I bought a carton of it last month and went through it in record time. I love it in my smoothies and I love it in MY COFFEE. It’s delicious! And creamy! It was such a pleasant surprise. It doesn’t taste like I’m sacrificing flavor at all when making the switch. 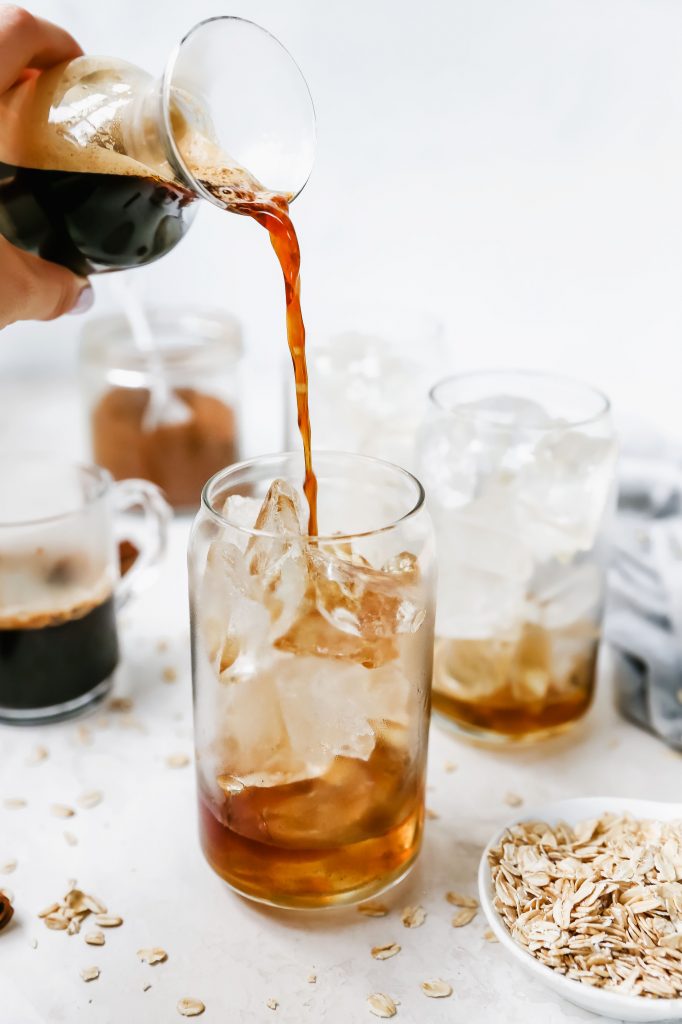 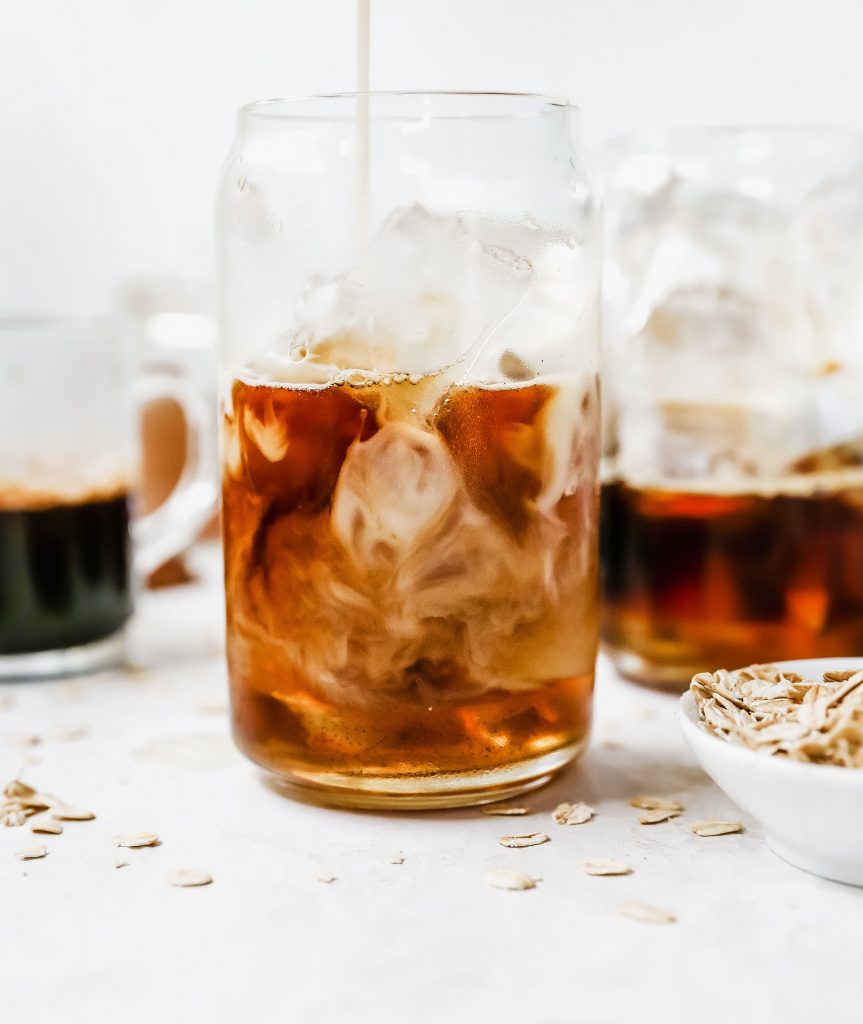 I have been dying to try my hand at an oat milk latte for weeks now. I couldn’t shake the idea. I just knew it would be delicious.

We’re moving into that time of year where my hot coffee (which I do drink year round) is starting to be replaced by tall glasses of icy cold brew or iced espresso. L-O-V-E. There’s something both refreshing and comforting about iced coffee. I always feel so chic when drinking it, which probably just means I’m super basic. Haha. 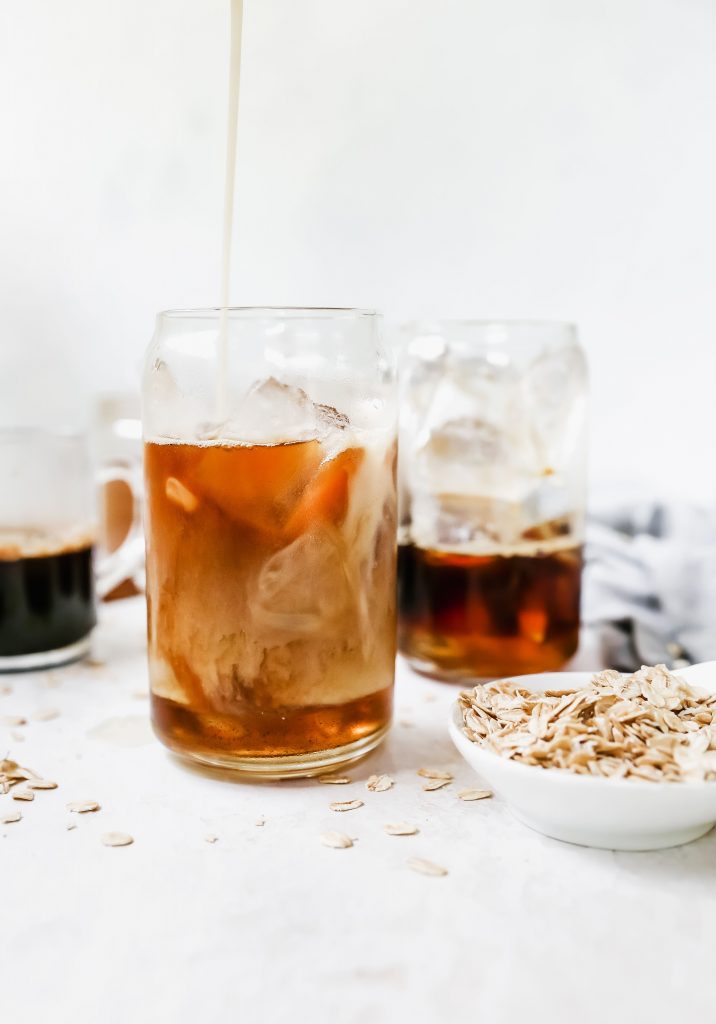 And that, my friends, is how we have arrived here today. I give you iced maple cinnamon oat milk lattes! AKA, the most delicious iced coffee I’ve had in ages.

It starts with a spiced simple syrup infused with warm cinnamon, vanilla bean, and a drizzle of maple syrup. Even though I loathe hot oatmeal, these are the flavors I most often associate with oats in general. If I DID eat oatmeal, these are the flavors I would want. And so I put them in our latte! The syrup adds an awesome spicy warmth to an otherwise summery coffee drink, and I’m loving the juxtaposition of this combo. 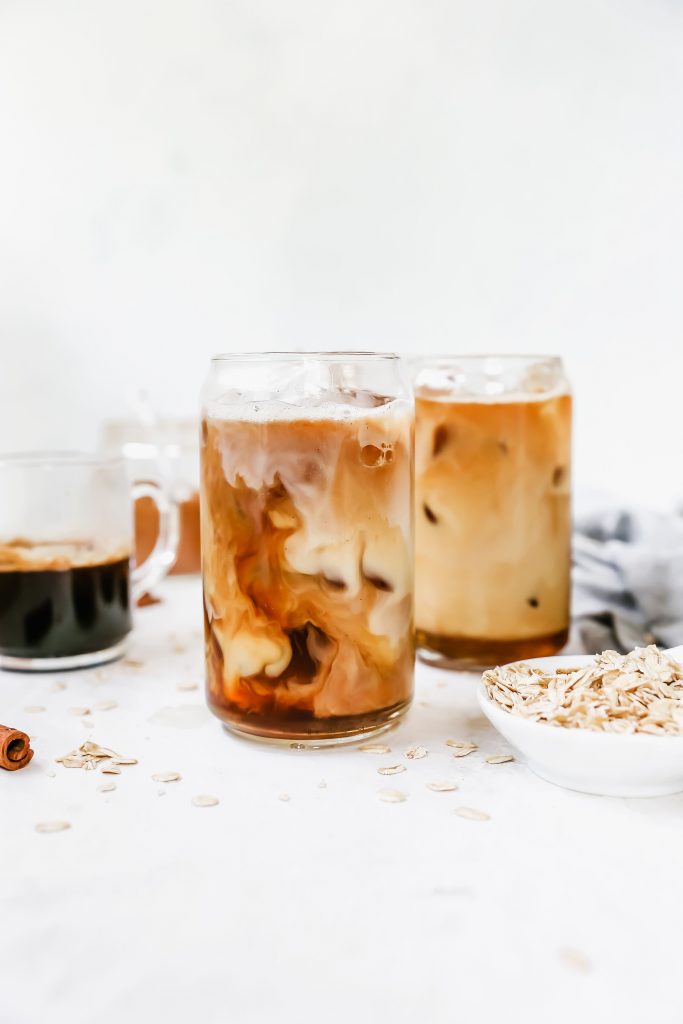 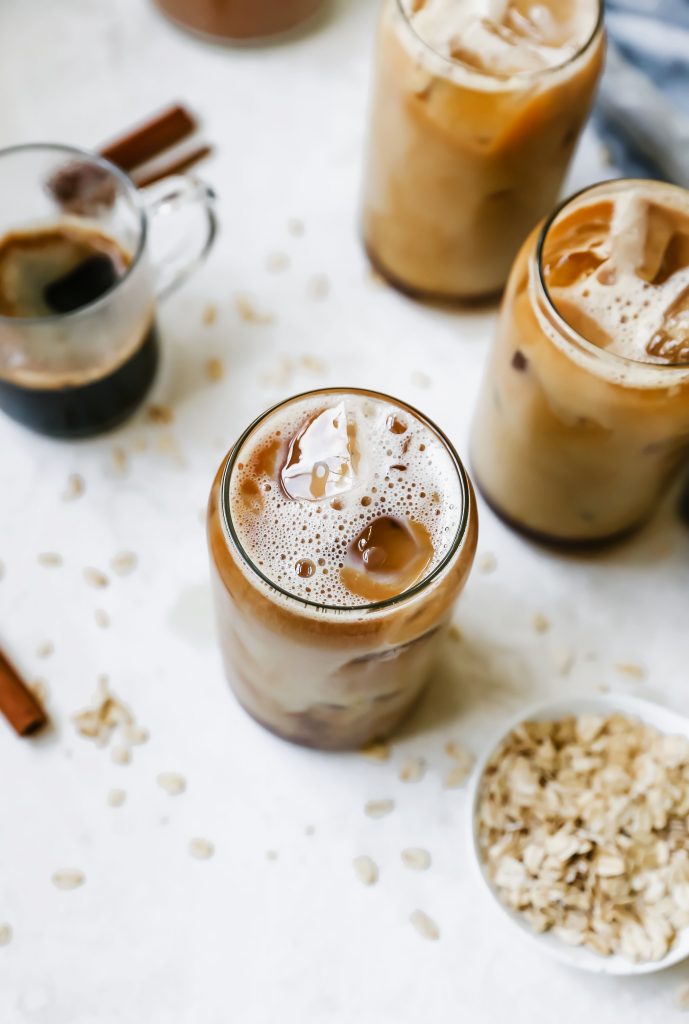 Once you have the syrup made (I like to make big batches of simple syrup like this – I store it in the fridge and pull it out whenever I need something a little extra special in my coffee), the lattes come together in no time. Brew some strong coffee, espresso, or even cold brew and pour it over ice. Lots of ice. 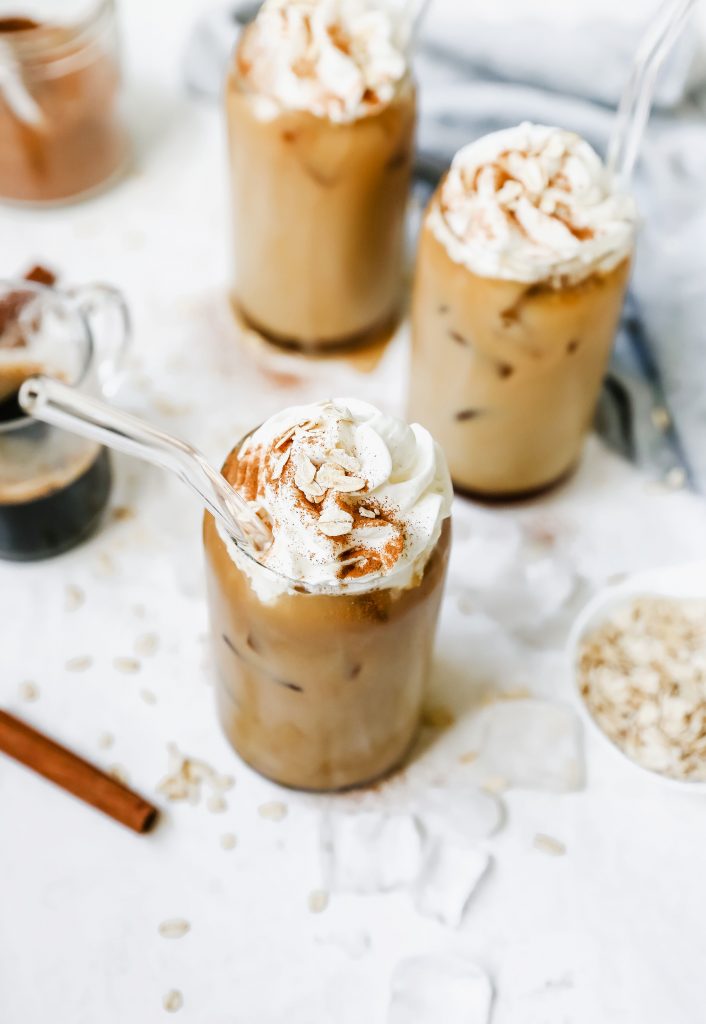 Next, pour in the oat milk and a little bit of the spiced syrup (do a little at first and add more as needed). Stir with a straw and suck it down. There’s hardly any work to be done here, but it doesn’t mean that these don’t taste and feel special. Again, they make me feel chic. Cool. Like I am on trend. 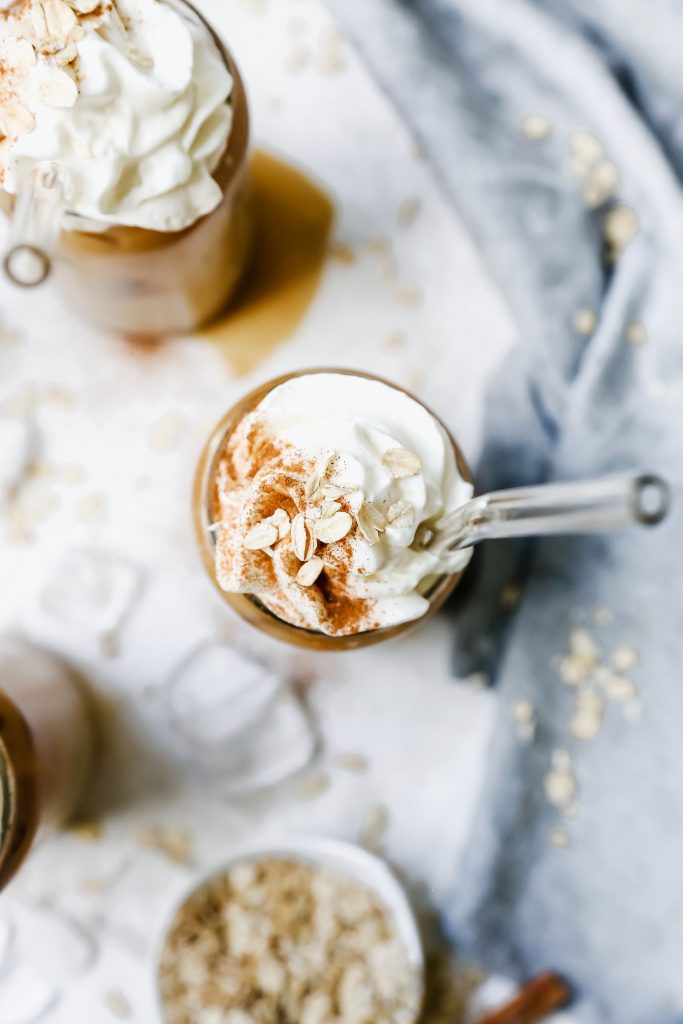 Even if you don’t get hyped about coffee like I do, I promise these are worth making. They’re refreshing and cozy at the same time, and sometimes, that’s just what the morning calls for! 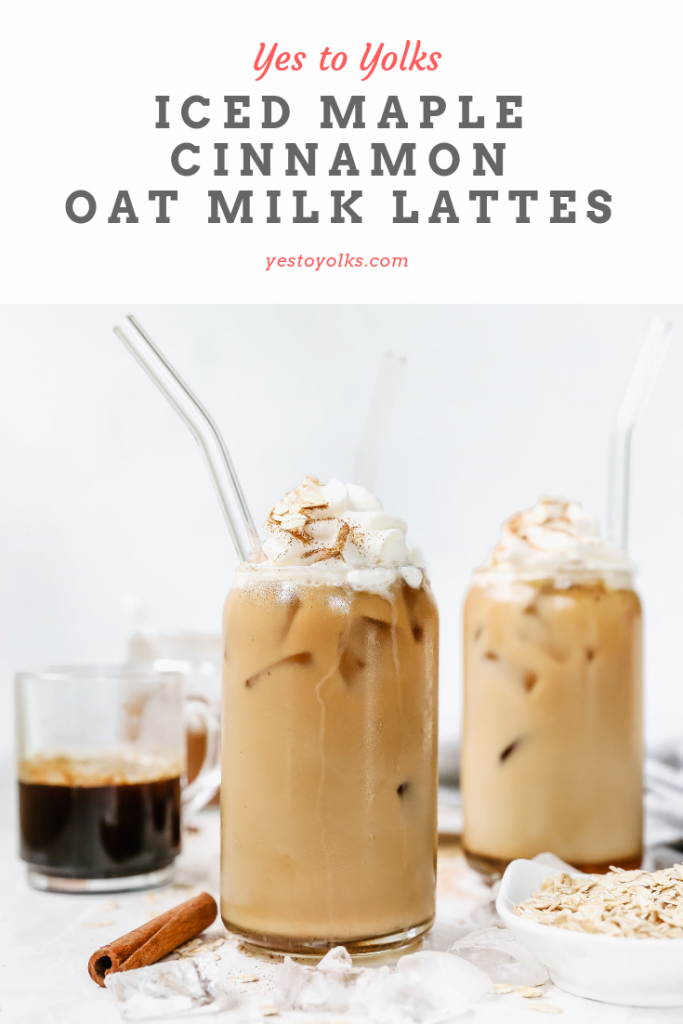