I don’t know what’s gotten into me, but I’m on a major salad kick right now. I CRAVE them daily. I’ve been eating them for dinners almost every night recently.

Must be the effects of early summer. Or the baby. Not sure which. 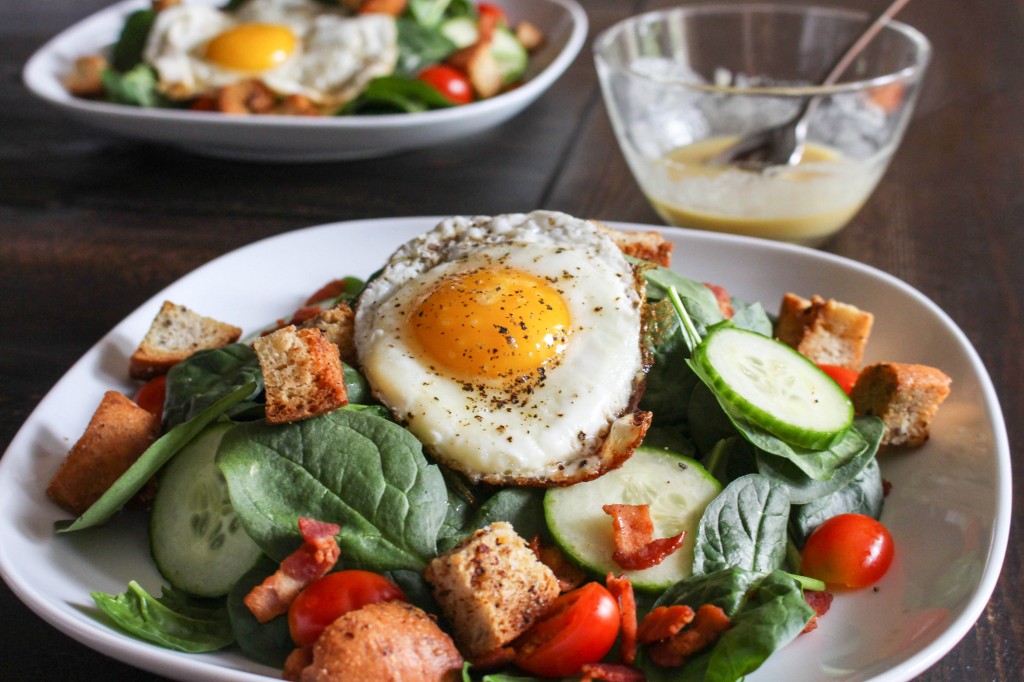 I raved and raved about the last salad I shared with you. In fact, I’m still internally raving about it. I may have to make it again this weekend. SO GOOD. The salad I’m sharing with you today is no slacker in the delicious department, either. It is a completely different type of salad than the last one, but still pretty darn amazing.

Who doesn’t love a BLT sandwich? OK, vegetarians and vegans probably don’t…but you know what I mean. I dream about them during the long winters when tomatoes aren’t looking or tasting too hot. Oddly, the tomatoes seem to be the best part of a BLT, don’t they? How often does a veggie outshine BACON?! 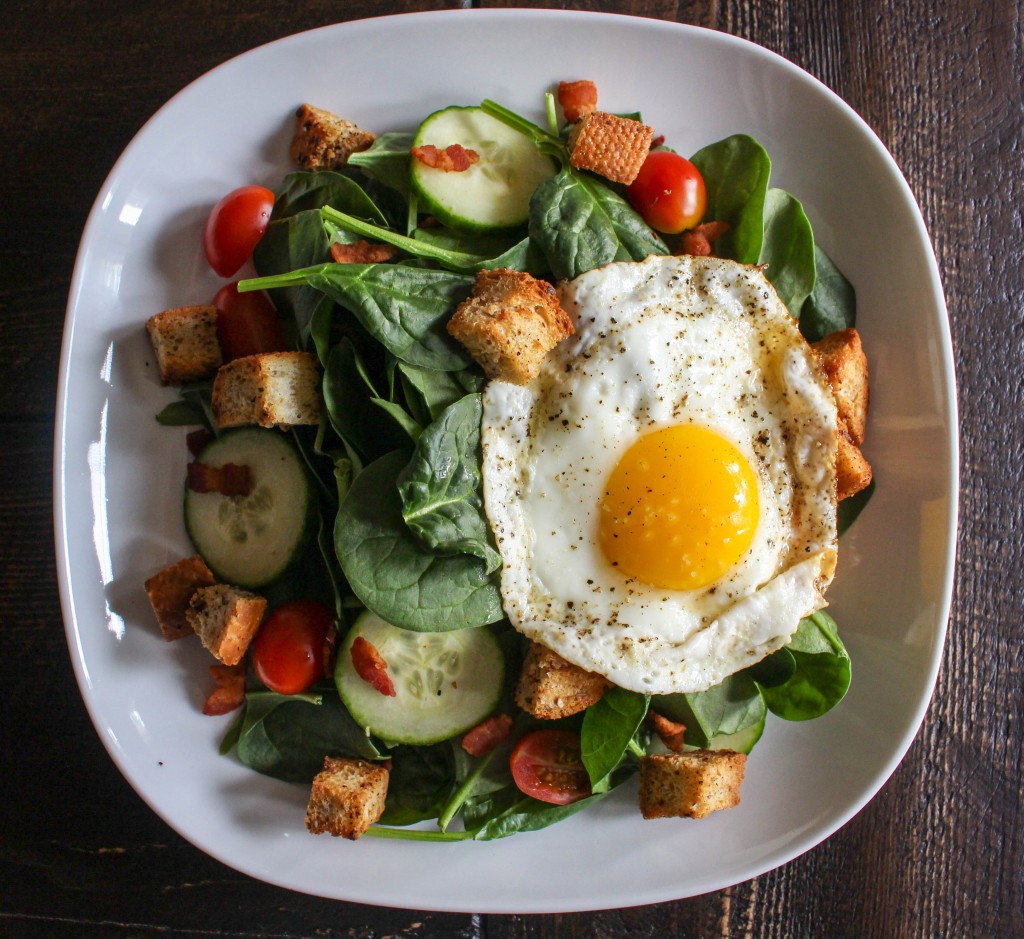 BLTs are hearty AND refreshing…which is a cool combo for a sandwich. I took the basic components of a BLT sandwich and threw them on top of some greens. I went double crazy with the bacon and tossed my croutons in the drippings. OMG. So good. They are a top contender for “best crouton ever.” Their only true opponent is the brown butter-sage croutons from this recipe. And then, because you know I’m crazy for eggs (duh), I put a fried egg on top. That part is totally optional, but you all know I’ll always try to convince you to add an egg on top of just about anything. It just “makes” so many dishes! That egg yolk, people. Gah. Hopefully you aren’t sick of me putting eggs on everything. 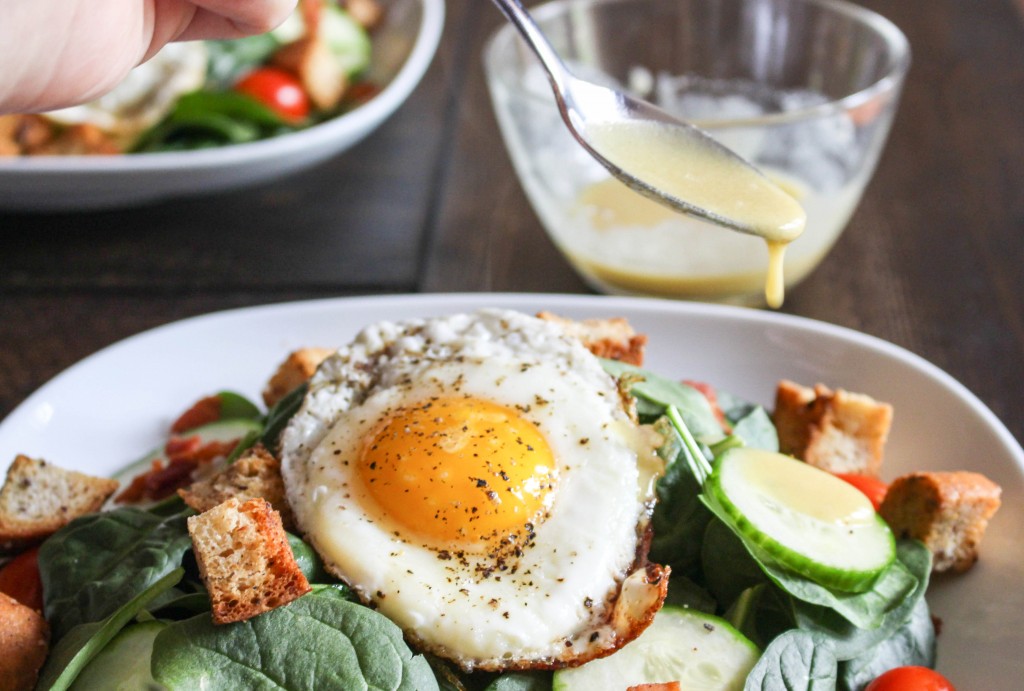 The dressing for this salad is super light and tangy. I was trying to mimic the flavors of the mayo or mustard that often go on a BLT sandwich without making the dressing necessarily creamy or mayo based. Trying to keep things light over here (ya know, “light” in the way of bread, bacon, and fried eggs). It adds a ton of flavor to the salad and kind of ties everything together. It’s like a sandwich and a salad made a baby. A delicious baby. “Baby, get in my belly!!!” Er, this just took a weird turn… don’t eat your babies.

Eat this salad instead! And put an egg on it. And some bacon…and some bacon croutons. Hey, it still counts as a salad! 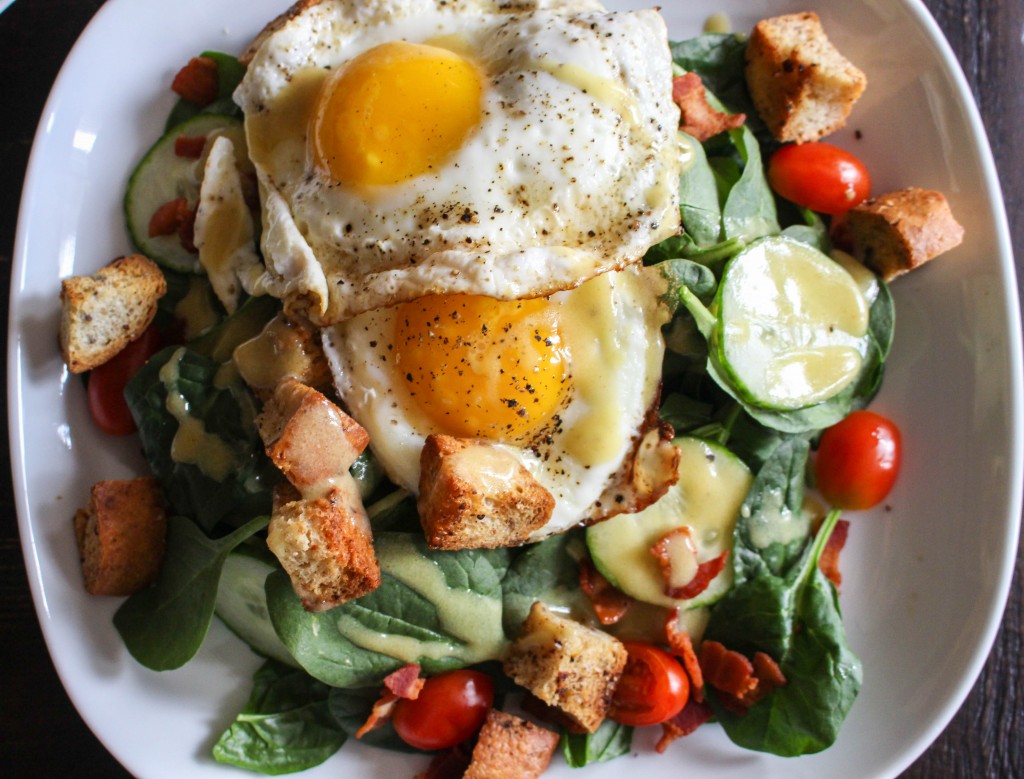 Preheat the oven to 400°F and spread the cubed bread out on a rimmed baking sheet. Crisp the bacon in a small skillet and reserve for the salad. Remove the skillet from the heat and add the butter, garlic, red pepper flakes, garlic salt, and pepper to the bacon drippings. Stir to combine and then pour the mixture over the cubed bread, tossing well to evenly coat. Bake for 10-15 minutes, stirring the croutons occasionally, until golden and crisp. Set aside.

Meanwhile, make the dressing by combining all ingredients in a bowl and whisking until well combined and emulsified. Set aside.

Heat a skillet over medium heat and melt some butter. Add two eggs to the pan and cook to desired doneness (my preference: a runny-yolked, sunny-side-up egg). Combine the bacon, tomatoes, cucumber, baby spinach, croutons, and dressing in a large bowl. Stir to coat everything in the dressing. Divide between bowls and top each serving with a fried egg. Serve immediately while the egg is warm and the yolk is runny.