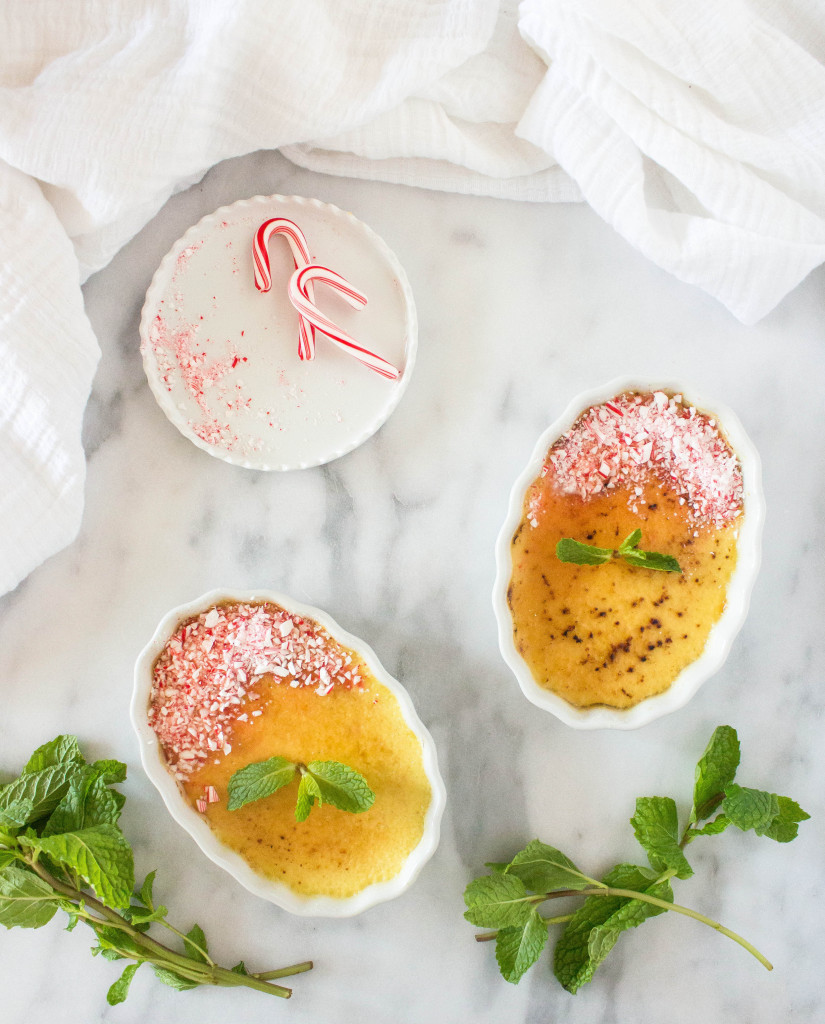 Our house is sometimes a house divided. When it comes to food, anyway. Well, food and movie preferences.

For instance, Dan doesn’t like a few of my favorite foods. Bell peppers. Watermelon. Lemons. Blue cheese. Peaches. Mint anything (even chocolate!). When it comes to movies, I flat-out refuse (and I mean REFUSE) to watch anything even mildly scary. Nope. Won’t do it. Couldn’t pay me to do it. My imagination was not cut out for that type of thing. While I’ve given up on trying to sneak peppers or blue cheese into our meals, he’s given up on asking me to watch the horror movies. He knows that we’d be sleeping with the lights on for at least a month, and that I’d be an extremely annoying bed buddy. We’ve had a few battles royale over the years about these sorts of things. Ya know. True marital strife. 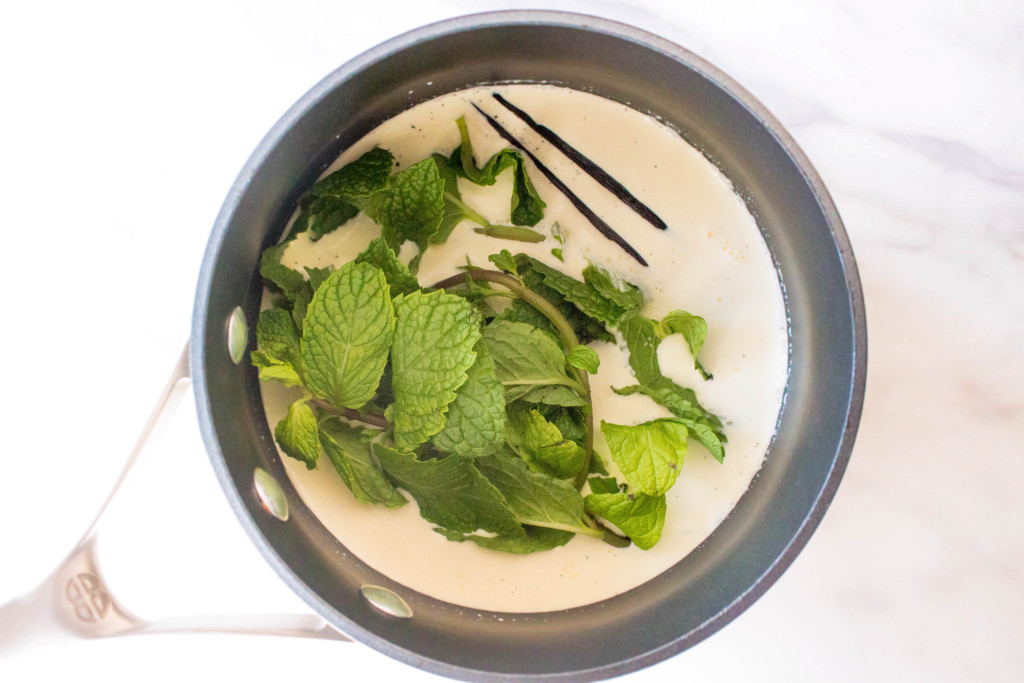 But one thing we definitely agree on? Crème brulée. We both love the creamy, luscious texture of the custard and the almost-burnt, caramelized sugar crust on top. In fact, it’s one of the few desserts we always agree on. If it’s on a restaurant dessert menu, we almost always order it. That’s why, when he saw these beauties sitting on the counter, adorned with fresh mint leaves and crushed candy canes, he immediately demanded to know why I would “destroy” such a perfect dish with mint. He wouldn’t even taste one! HIS LOSS. 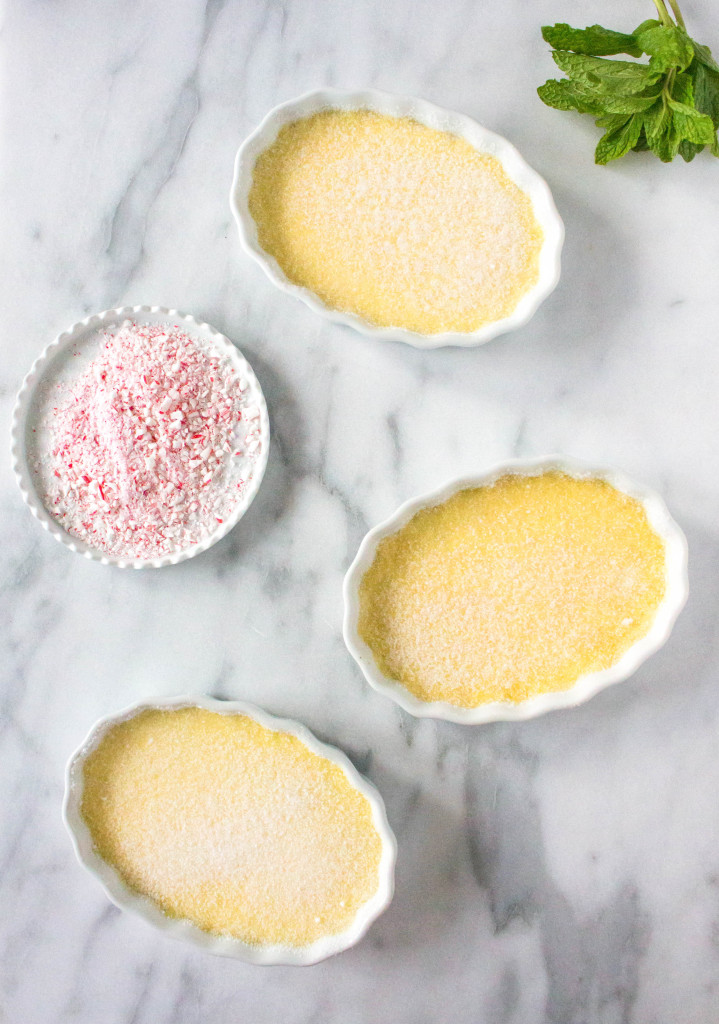 When we were on our honeymoon a few years ago in Bora Bora (we saved on the wedding and went all out on the honeymoon = a highly recommended route), they put Tahitian vanilla bean in just about everything. And we were L-O-V-I-N-G it. I shipped home a bajillion dollars worth of Tahitian vanilla beans, and I’ve been working my way through them ever since, reserving them for only the most special desserts. Homemade crème brulée is definitely worth one of my precious vanilla beans. Especially when it takes me right back to Tahiti, where we enjoyed vanilla bean crème brulée at almost every meal. Except breakfast. But not because we didn’t want to. They just didn’t offer it before noon. Boo. 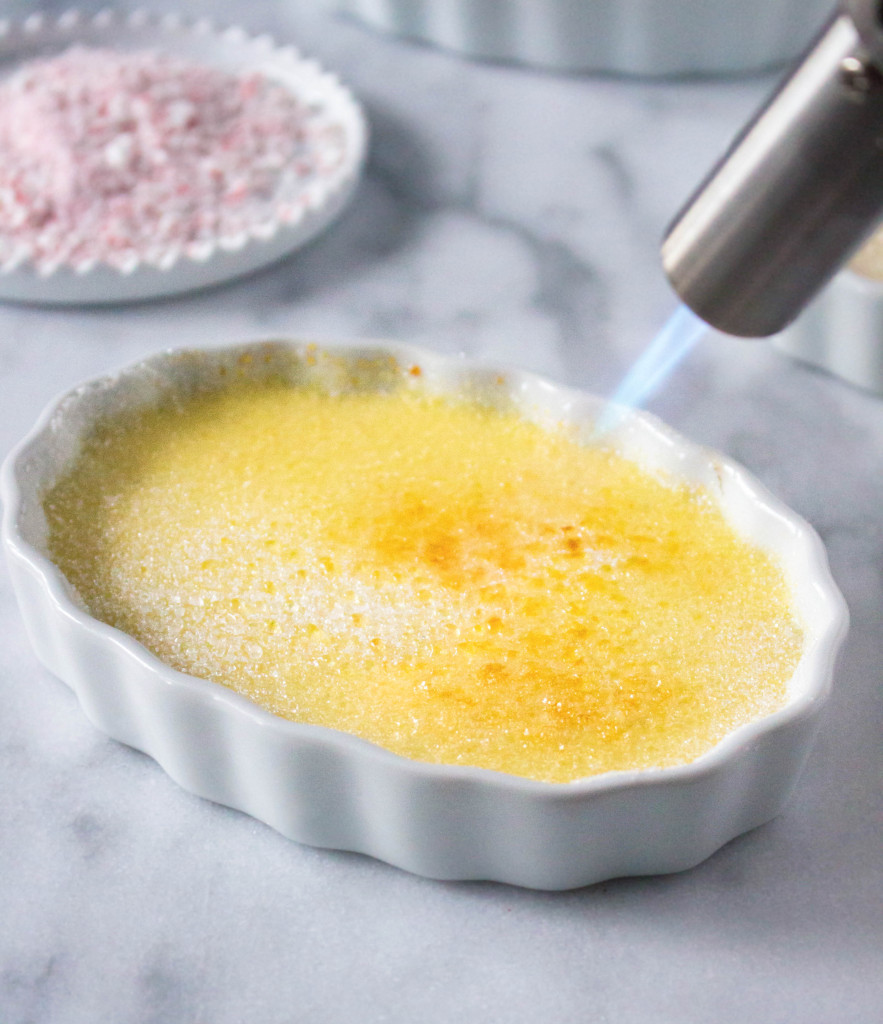 It was some of the best crème brulée either of us had ever tasted. When we got home, I vowed to perfect it at home. I was completely intimidated, though, because it seemed like a complicated and out-of-my-league dessert. I mean, look at all those fancy French accents going on in the name! Could I pull it off? 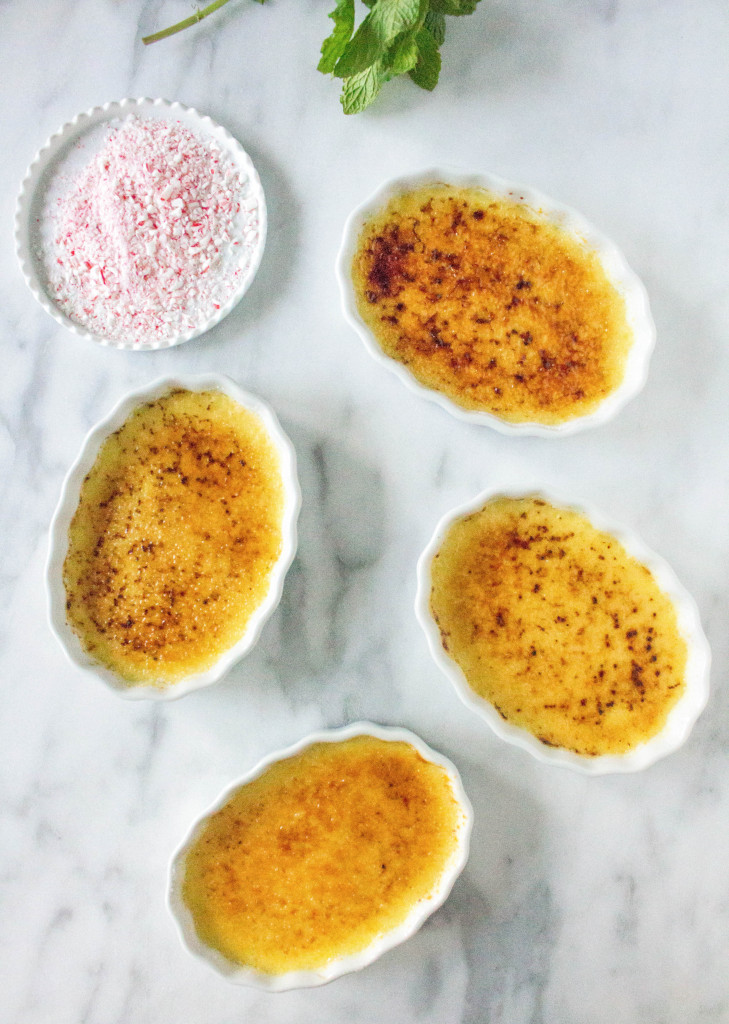 Turns out, I could pull it off. We ate Tahitian vanilla bean crème brulée several times in the year that followed our honeymoon. It was a lovely food memory for both of us. One bite would instantly send us back to the most beautiful place on earth. Sigh. We peaked early in life on that one.

The thing about crème brulée is this: it’s really easy! There are several steps that you have to do, but none of them are particularly difficult. As long as you don’t let your eggs curdle by getting them too hot, and as long as you use a water bath in the oven, you’ll be golden! Just like that crispy sugar crust we see here. 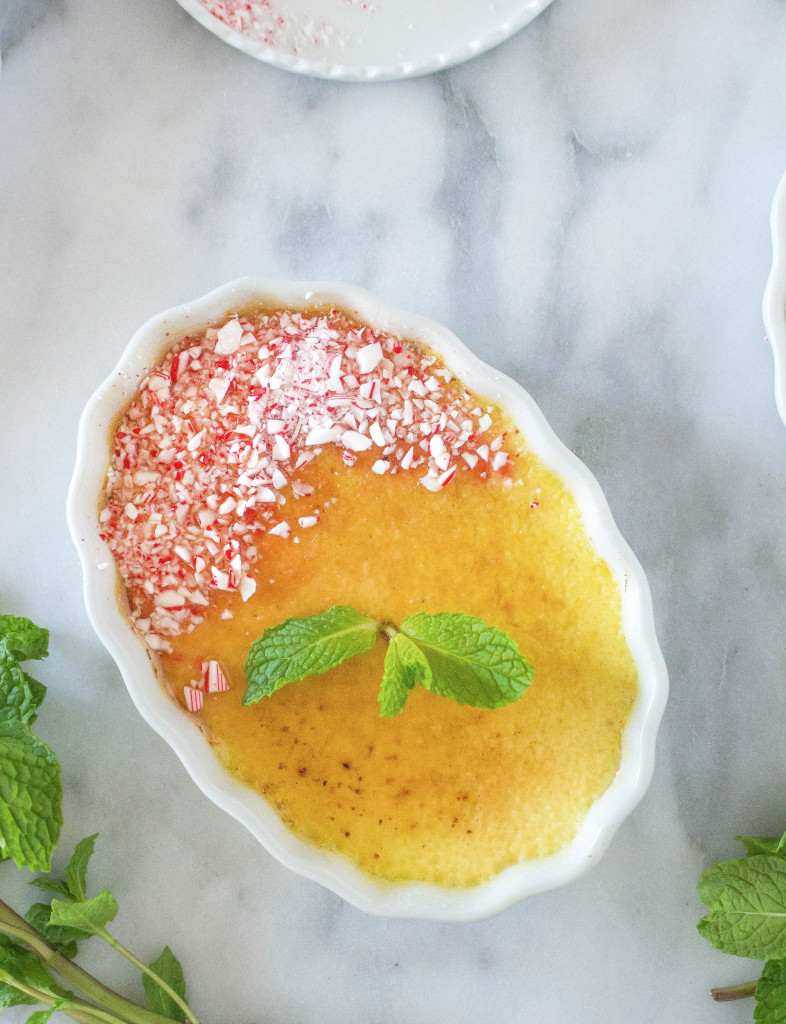 Another awesome thing about crème brulée? They can be made DAYS in advance of when you want to serve them. You definitely want to do the sugar crust at the last minute, but making the custard, which is the most time intensive part, can be done way ahead. You just keep these custards in the fridge until you’re ready for them. Which makes them PERFECT for Christmas dinner. Alongside an obscene platter of Christmas cookies. Duh. Gotta have the cookies. 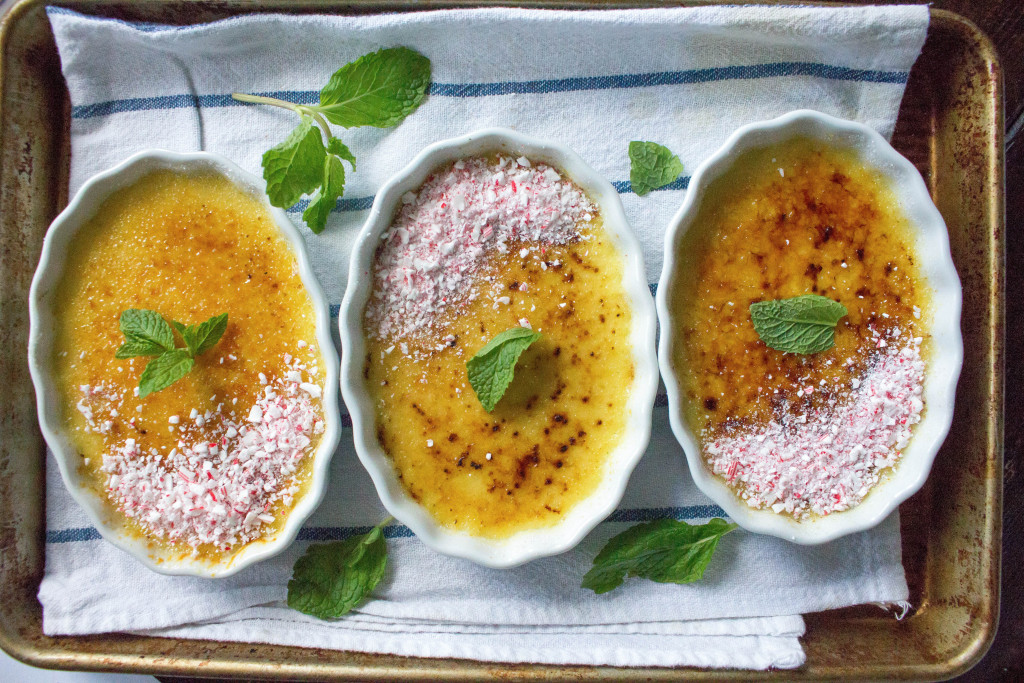 Despite my husband’s aversion to mint, I decided to go ahead anyway and “destroy” one of his favorite dishes with the flavors of Christmas. And I totally stand by it. The mint here is not at all overpowering. It adds a fresh note without taking over. To ensure that these didn’t taste like mouthwash, I went with fresh mint and allowed it to infuse in my cream for quite some time before whisking it into the eggs. I DID add a smidge of mint extract, but only a couple drops because…again…mouthwash. Plus, we’ve still got the incredible flavor of Tahitian vanilla bean going on here. Like I said earlier, his refusal to try these was definitely HIS LOSS. 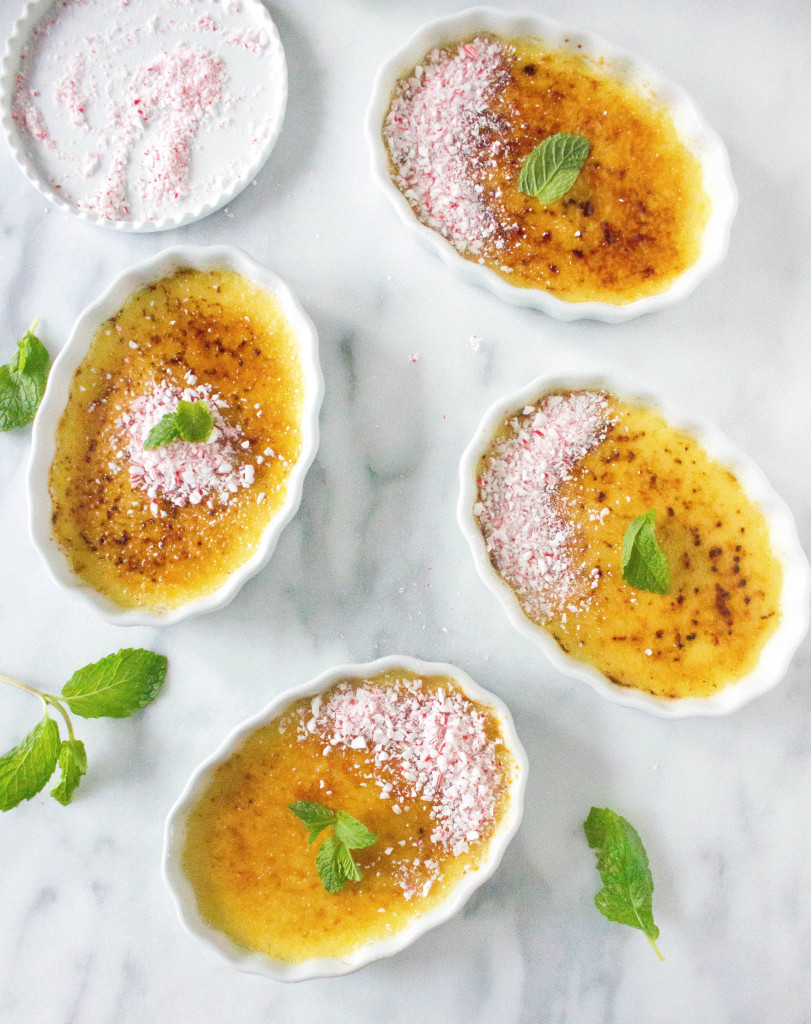 Now, I’ve seen peppermint crème brulée on the internet before. A lot of times, people use crushed up candy canes as part of the sugar crust. And while I love this idea, I wanted to keep the original sugar crust in tact. I just love the way it looks! So, instead, I garnished them with the crushed candy canes…because I still wanted some of that Christmasy cuteness going on. I think it makes them look quite pretty and festive. You can do either method. Whatever floats your boat. I think these will be a holiday hit either way. 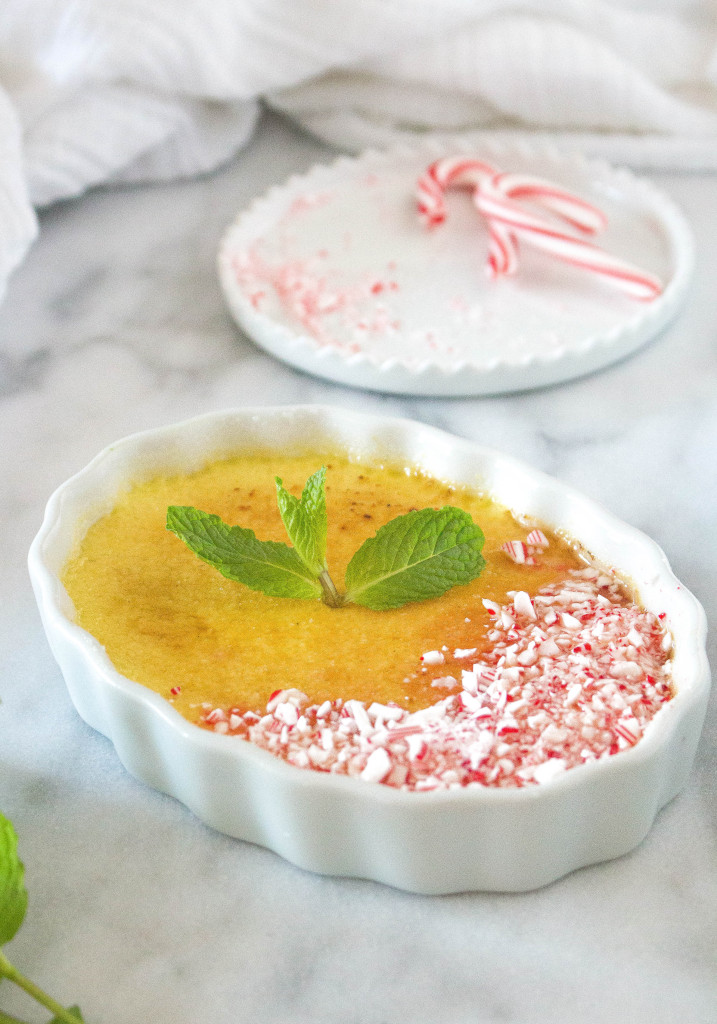 Just don’t ask my husband. He simply doesn’t know what he’s talking about.