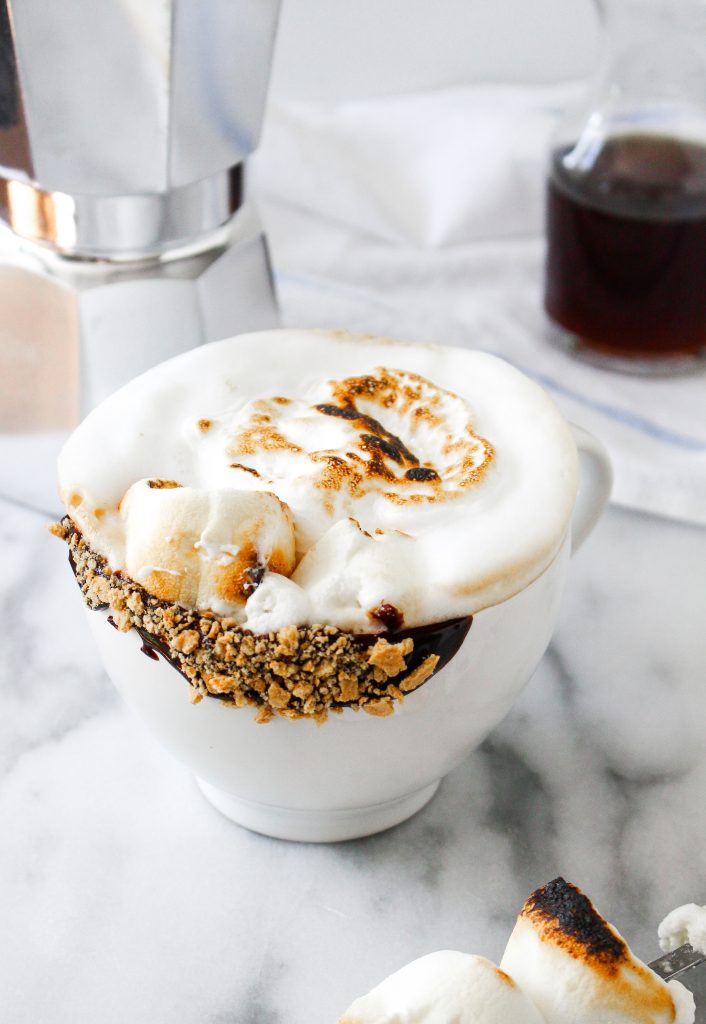 Oh, how I’d love to curl up under a blanket with one of these clutched in my hands right this instant!

If you follow me on Instagram or Snapchat, then you may remember that I shared a sneak preview of these decadent lattes with you all a couple weeks ago. And then proceeded to make you wait for the recipe. Such a tease, right? 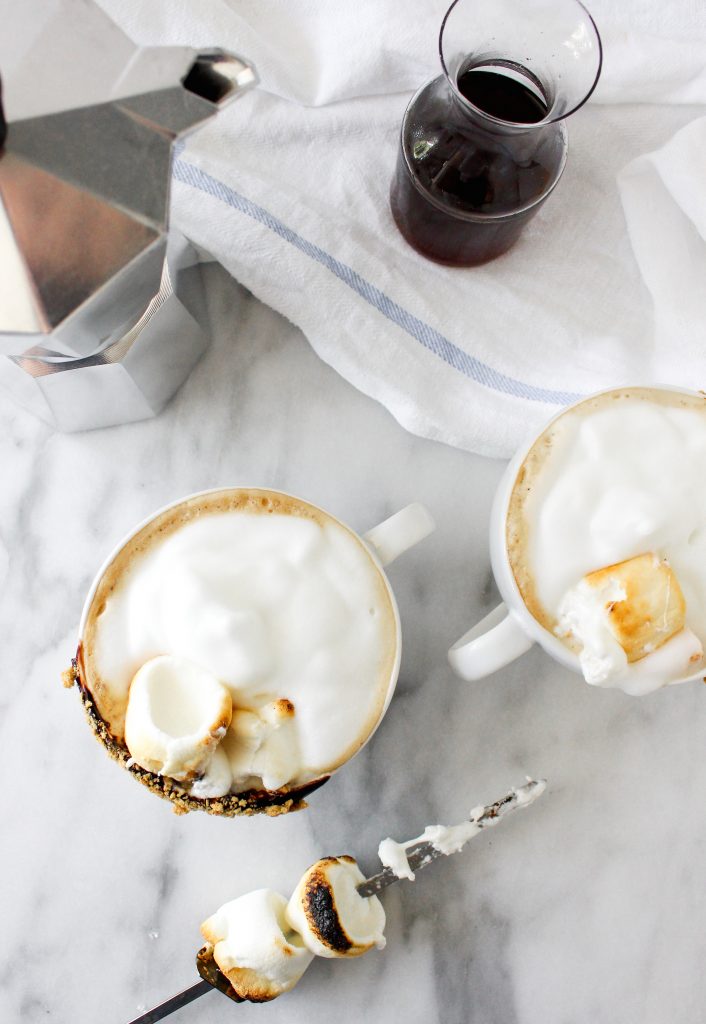 Well, I think you’ll feel that I’ve thoroughly made it up to you, hopefully by the time you’ve finished reading this post and have made plans to run to the store to get all the ingredients for these lattes immediately. 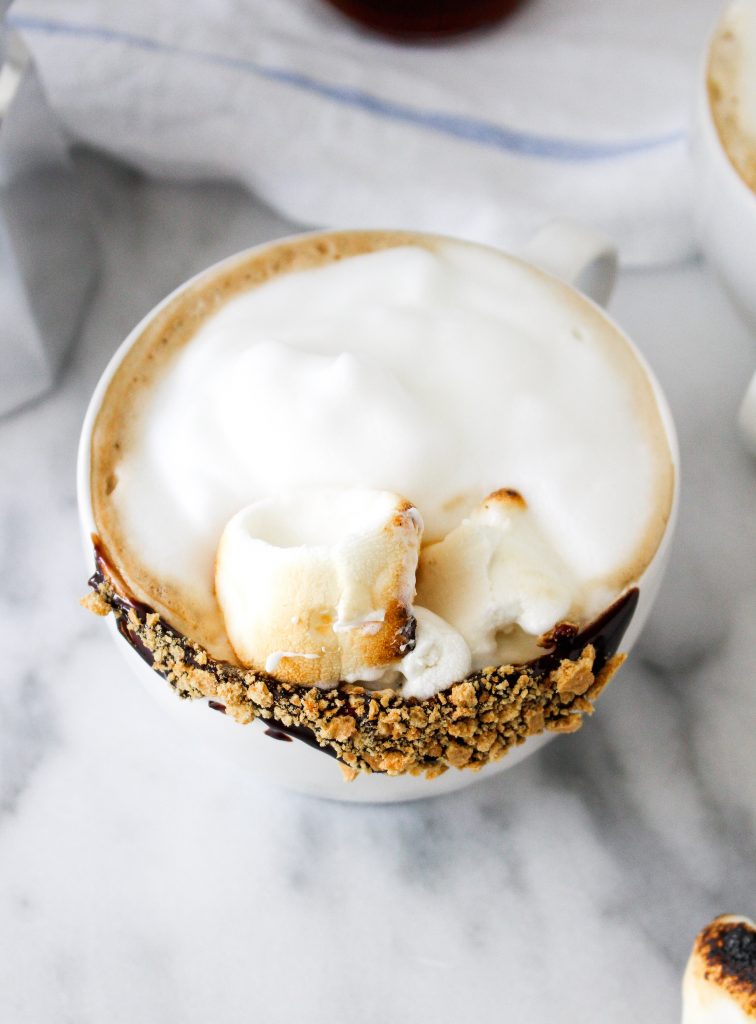 Because, friends, that’s how good they are. And that’s coming from someone who generally can take or leave the marshmallow. I enjoy marshmallow in things, such as hot chocolate, but generally, I’d rather eat a cookie than a marshmallow. Even the homemade ones. 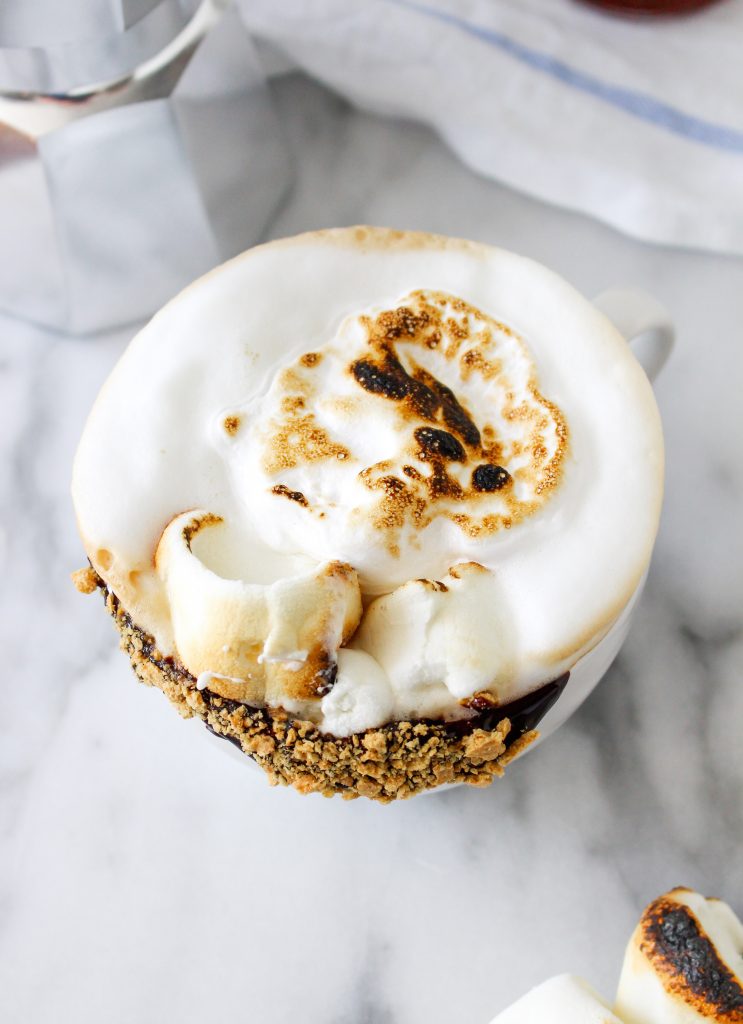 I’ll give you a moment to recover from that horrible shock. Hopefully you’ll still trust my judgement when it comes to food. If anything, it just goes to show you how delicious these lattes are. Even I, a lukewarm marshmallow fan, has declared them incredible. 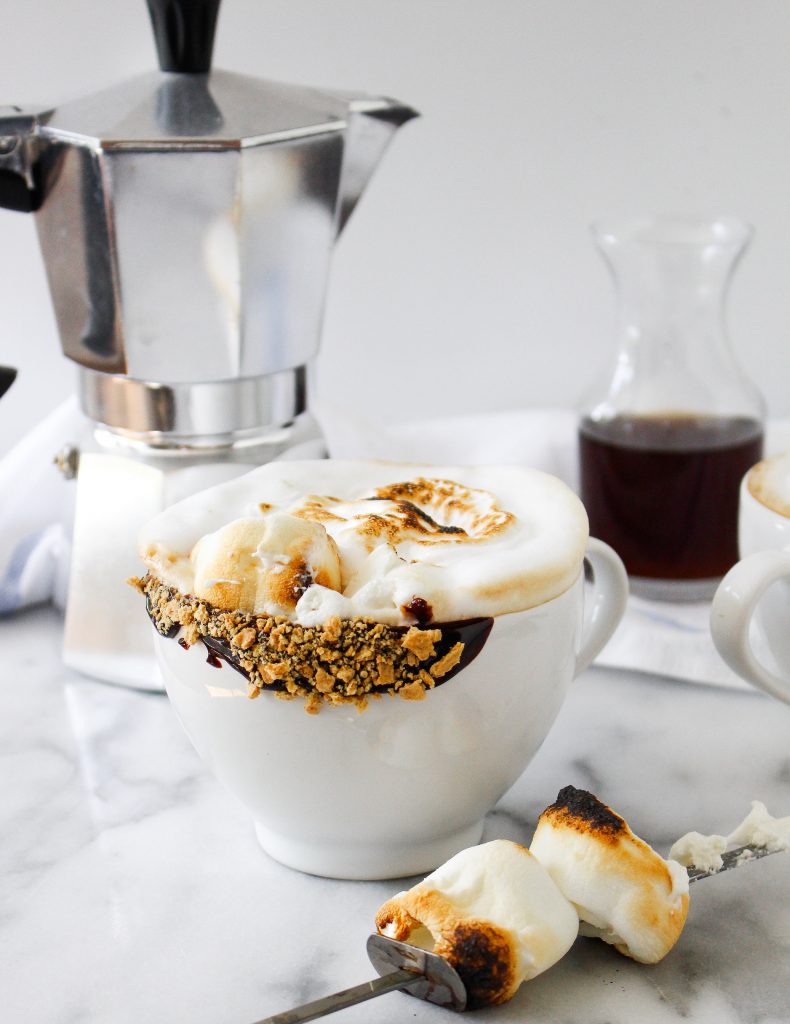 It all starts with toasted marshmallow simple syrup. It’s totally a thing! I didn’t know it was a thing until I dreamt it up one random day. I was putting together some fall-inspired recipe ideas to share with you all, and I couldn’t shake the idea of a toasted marshmallow coffee drink. The wheels starting turning and I ran with it. 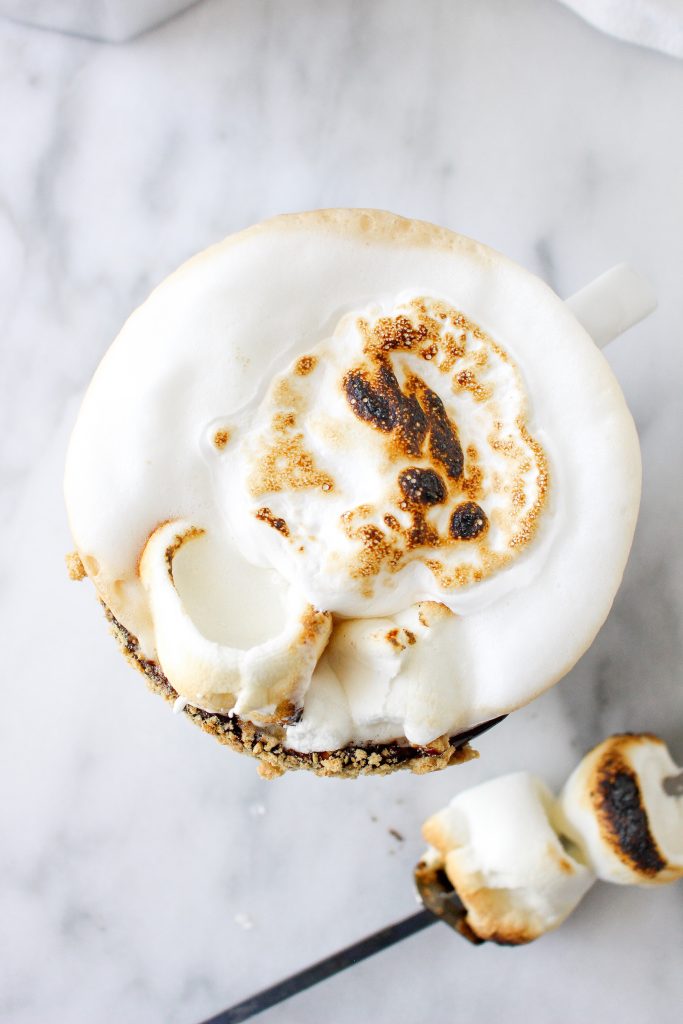 The syrup itself totally tastes like a toasted marshmallow. It’s the coolest thing. The coffee and steamed milk clouds take on a distinctly toasty flavor from the syrup. It’s sweet enough but not sickeningly so (and the amount you use is completely up to you anyway). Then the chocolate comes in and makes everything just…magical. The graham crumbs add a fun and unexpected texture to things, too. 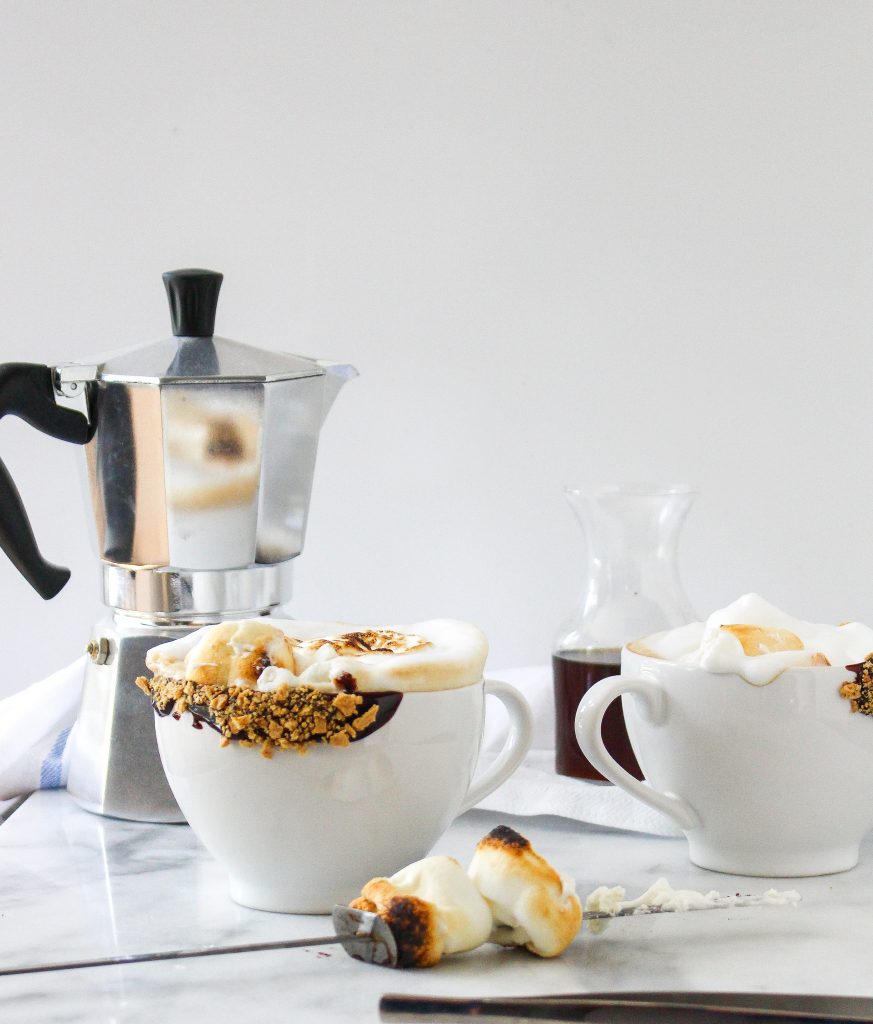 And because I couldn’t leave well enough alone, I went ahead and added a giant dollop of marshmallow fluff to each glass and torched it with a kitchen torch. Yup. MAGICAL, people.

This latte is the best of all worlds: a creamy latte, a strong cup of caffeine, and toasty marshmallow s’mores. There’s not more I could ask for on a cold, rainy day like today. 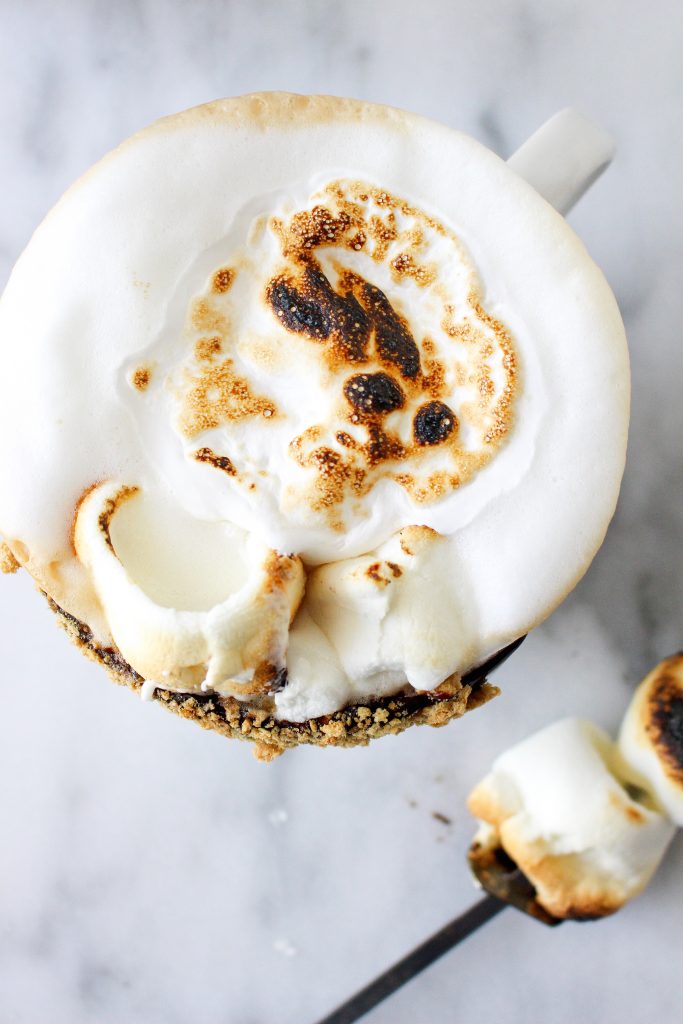