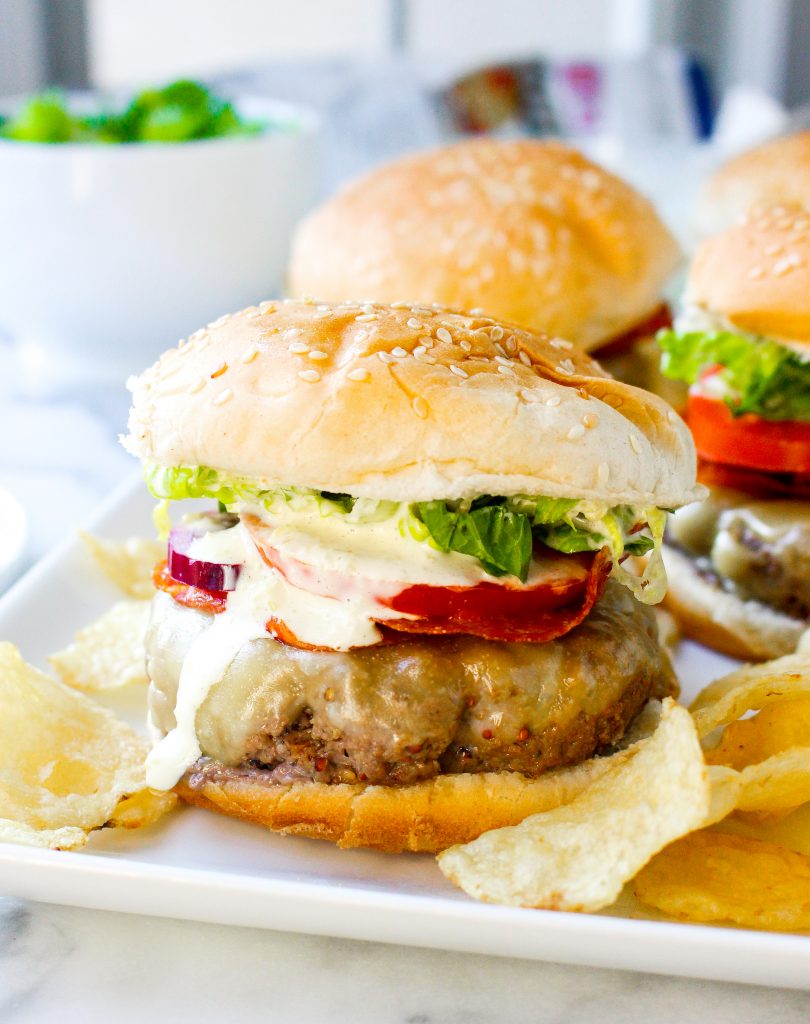 Let’s celebrate the end of the week and beginning of the long weekend, shall we? Because Friday, after all, is totally part of the weekend now. Tell me I’m not alone in that sentiment, please.

Weekend food is the best food. Right? We tend to eat healthily majority of the week so we can indulge a little bit more on the weekends (not the only reason, of course, but a big one!). Burgers like these fit perfectly into those sorts of indulgent moments. 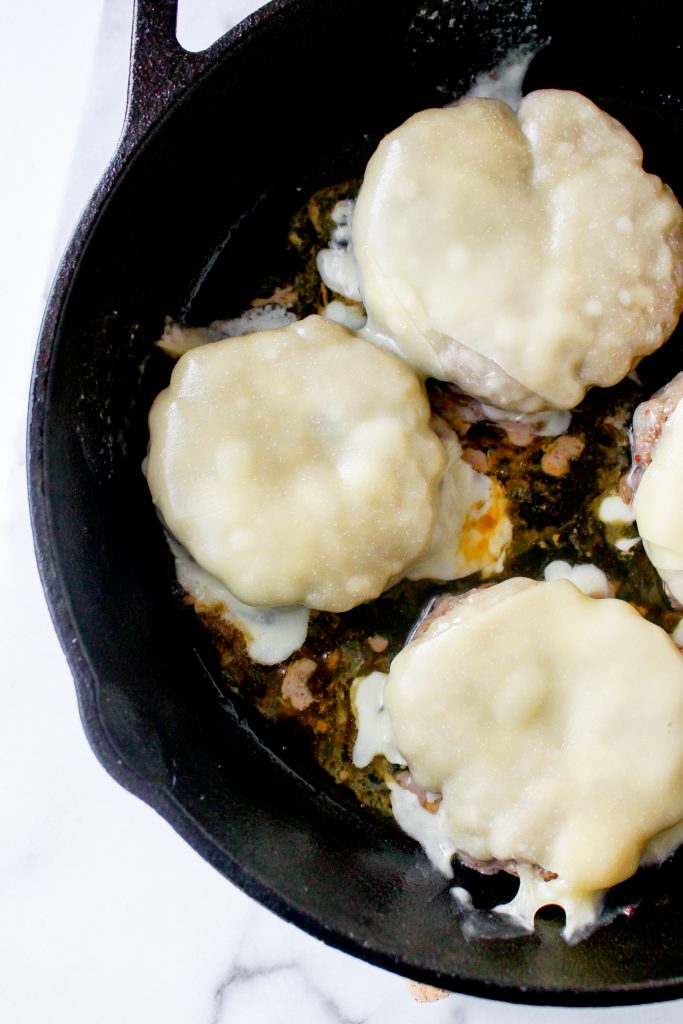 When I was developing this recipe, I wanted to make a burger that was reminiscent of an antipasti platter. Something meaty, cheesy, a touch spicy, and a little bit briney. I managed to cram all those flavors in here, which only makes me want to cram these burgers into my face hole. They’re SO GOOD. They really do remind me of an antipasti platter, except they’re a touch bit heartier, as you might imagine. 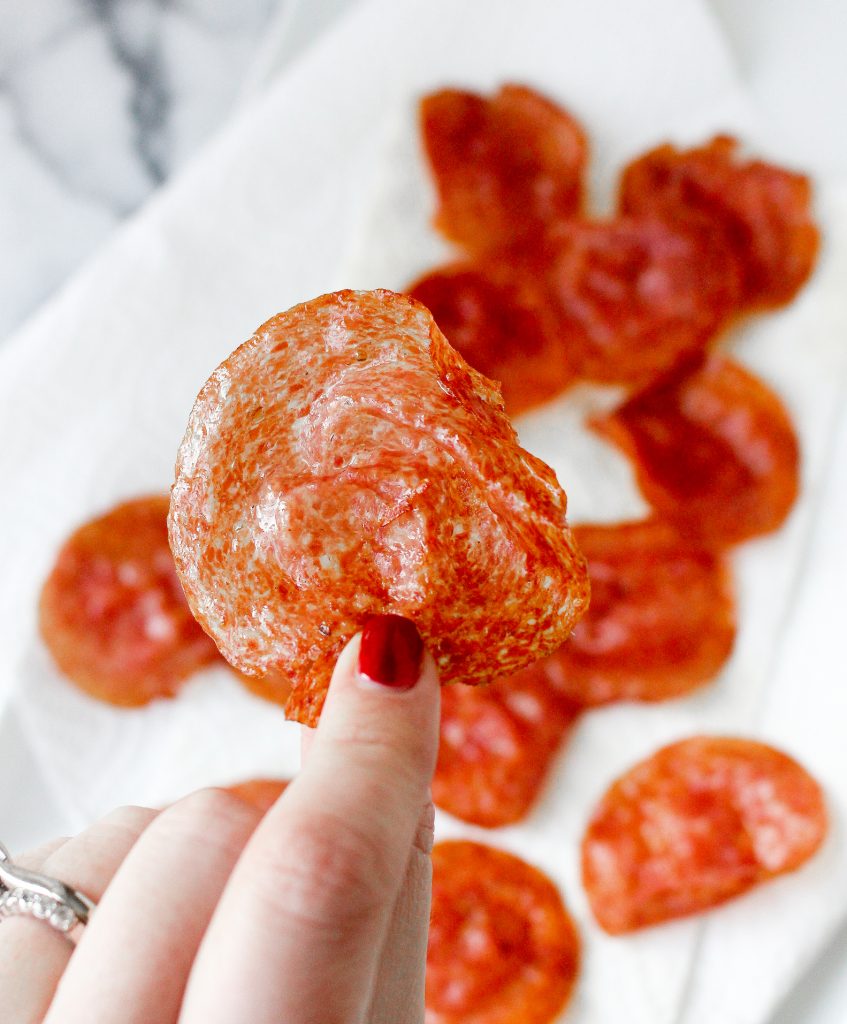 It all starts with roasted garlic. Don’t all good things? If not, they should. Roasted garlic is such a magical thing. It’s like browned butter. It makes whatever you’re adding it to triple in value on the flavor scale. And it’s so easy! It’s really a wonder I don’t roast garlic several times a week. Hmm. Maybe I’ll add that to my list of resolutions. 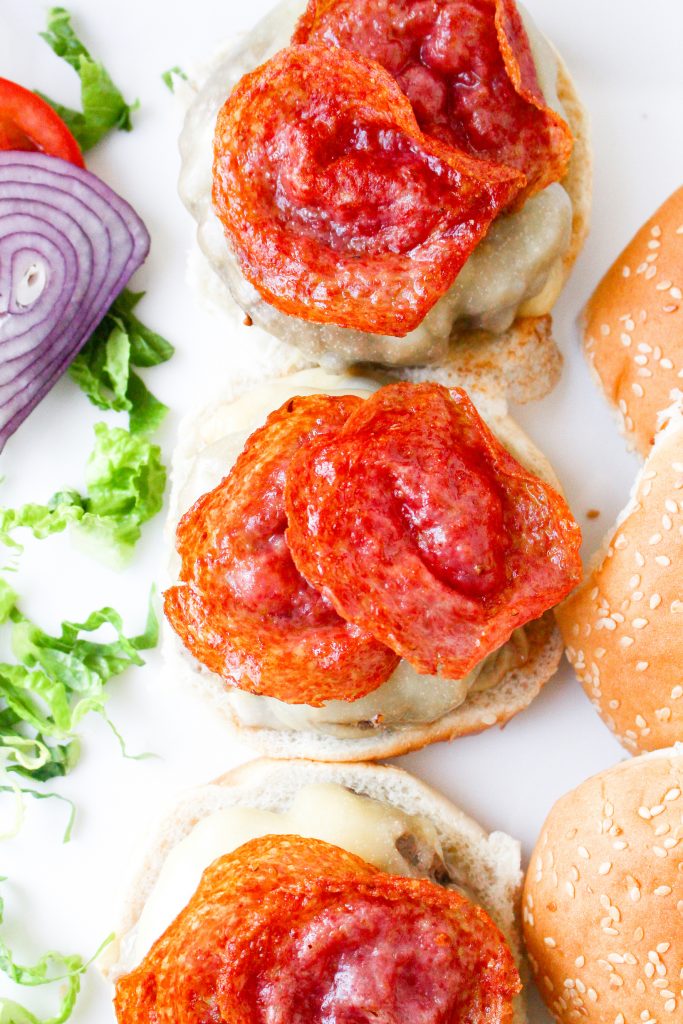 Roasted garlic fills the house with the most insanely delicious aroma, and lends a caramely, sweetened-up garlic flavor to all the things. For people that aren’t huge fans of the more pungent flavor of raw or even cooked garlic, roasted garlic may be the answer! You still get plenty of garlicky flavor but it’s mellowed out. And lovely. 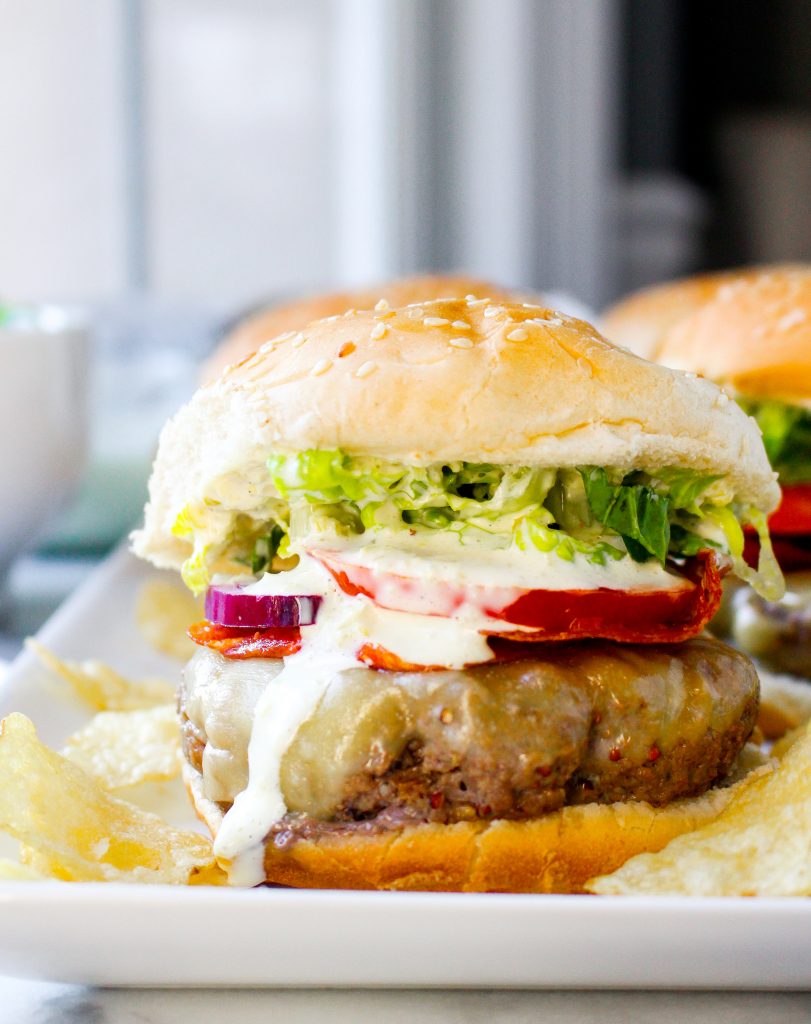 I mashed the roasted garlic cloves into a paste and added them to my ground beef for the burger patties. And we loved these so much, I think I want to roast garlic for all my burgers from here on out. So much flavor! The burgers themselves are topped with the most glorious discovery: pan-crisped salami slices. 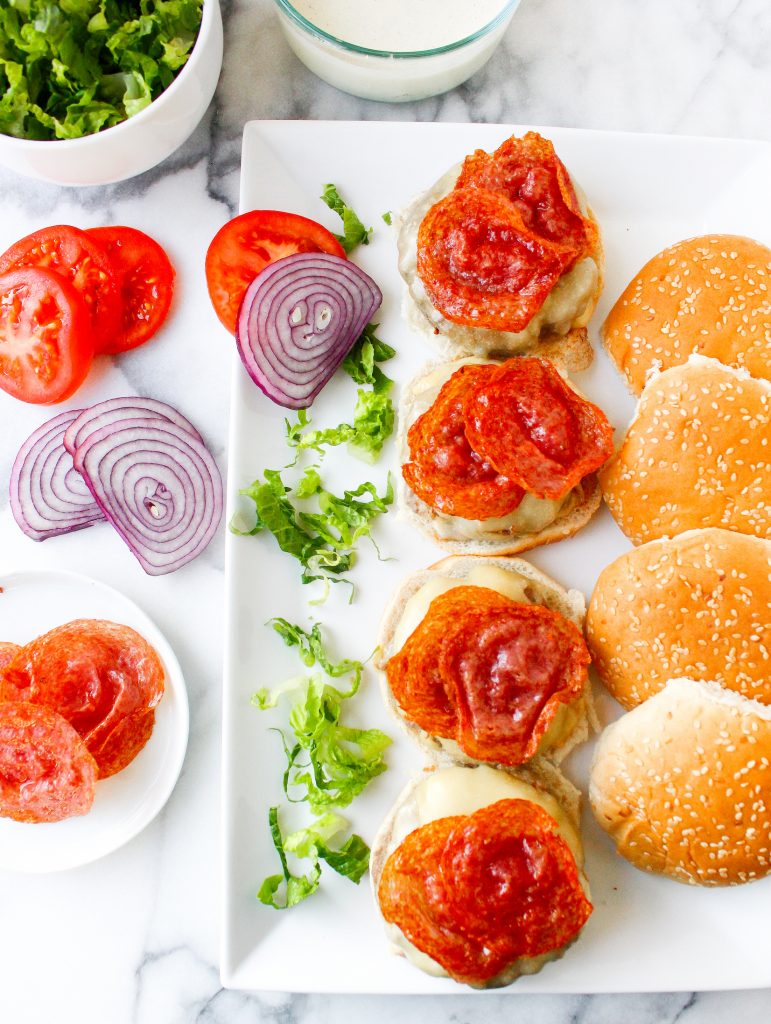 You guys! Salami is not usually my thing. I love a soppressata, but straight up salami? No thanks. Until now! Until I crisped it up like bacon in a hot pan! It’s magic! It tastes like….well, it tastes like a combo of salami and pancetta/bacon. AKA, DELICIOUS. Using super thinly sliced salami is key here, I think. I just got mine sliced at the butcher/deli counter in my grocery store. I asked for it to be paper thin. That way, it crisps up and gives the best crunch to these burgers. 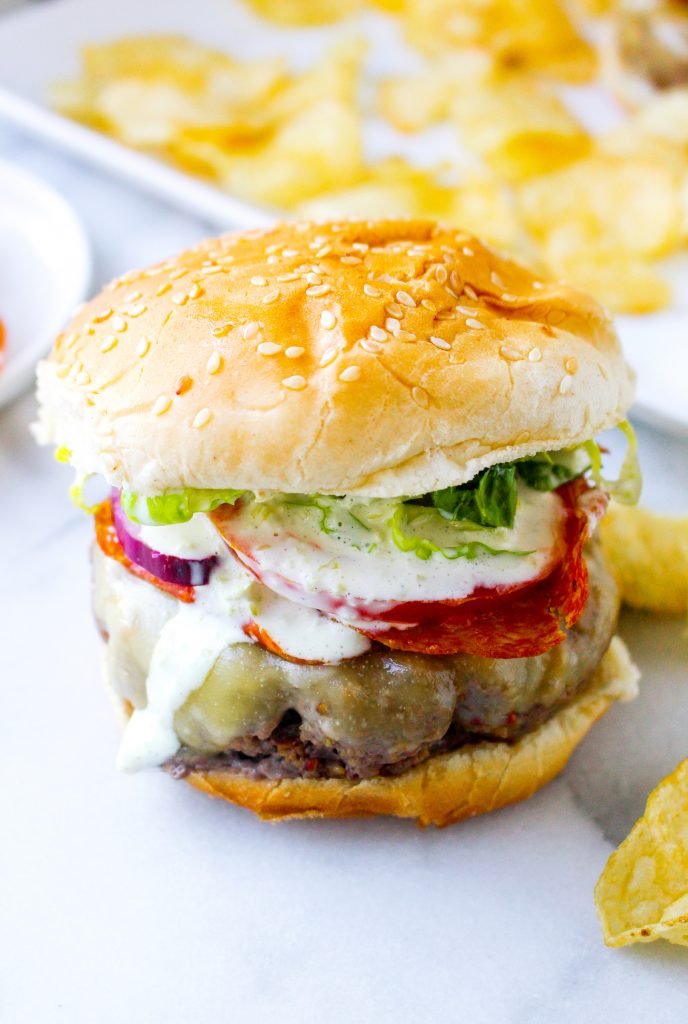 And again: SO MUCH FLAVOR. I sound like a broken record, I know. But I’m running out of ways to convey just how delicious these are.

And we haven’t even gotten to the aioli yet!!! OK, so the aioli. OMG. It’s really just a jacked up mayo, filled with briney, spicy, addictive pepperoncini peppers. Good lord, do I love a pickle. Pickled hot peppers are definitely up there with my favorite things, especially when we’re talking cheese. They just BELONG with cheese on burgers, nachos, cheese fries. You name it. If it’s got cheese, I like pickled hot peppers on there. 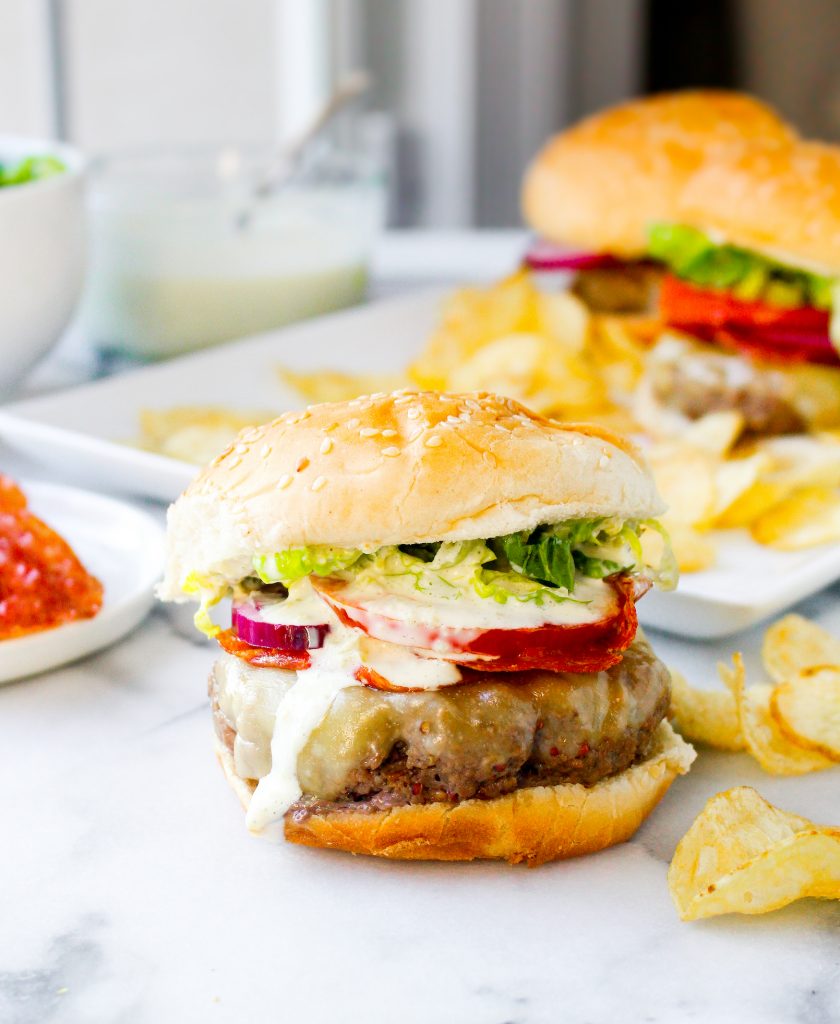 As you can see, I went a little heavy with the aioli because I am completely obsessed with it, especially when it’s cascading over the fresh crunch of shredded lettuce and sliced tomatoes. YUM. You don’t have to go with such a heavy hand, though. That’s the great thing about burgers, right? Aside from tasting fabulous and serving as a comfort food, they are customizable in a million and one ways. You can make these your own.

A pretty great way to kickstart the long weekend, right? 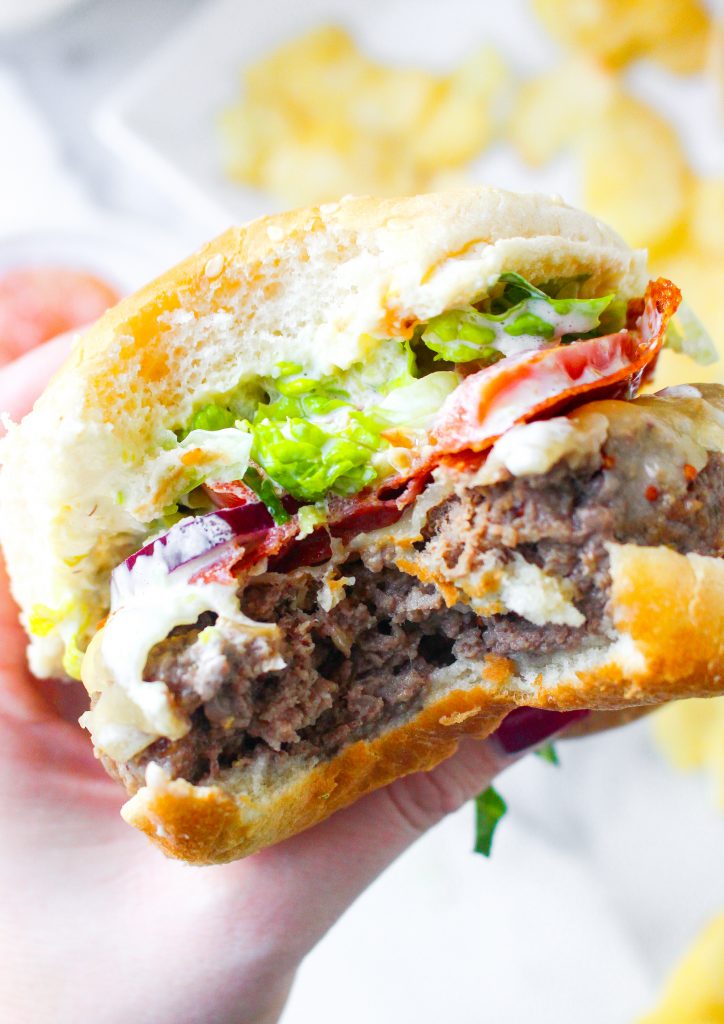