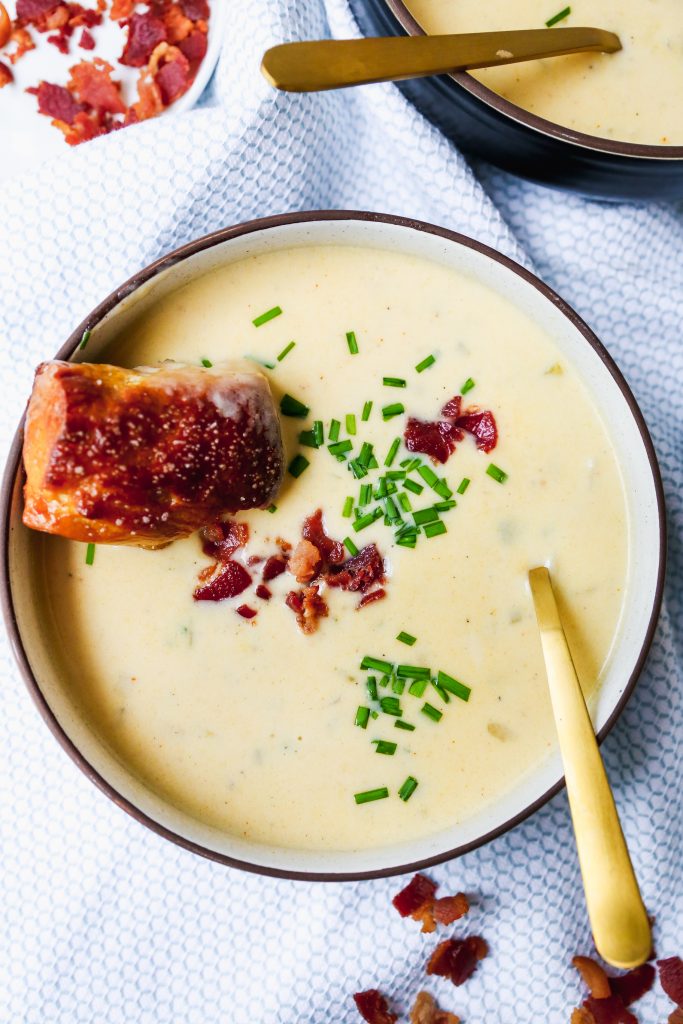 Boy oh boy, have I got a bowl of cozy for you today.

I looooooove early fall weather. It’s still mild enough out that I can wear flip flops (I wear them long past what is considered appropriate, hah), but cool enough that I start to crave all the fall foods. 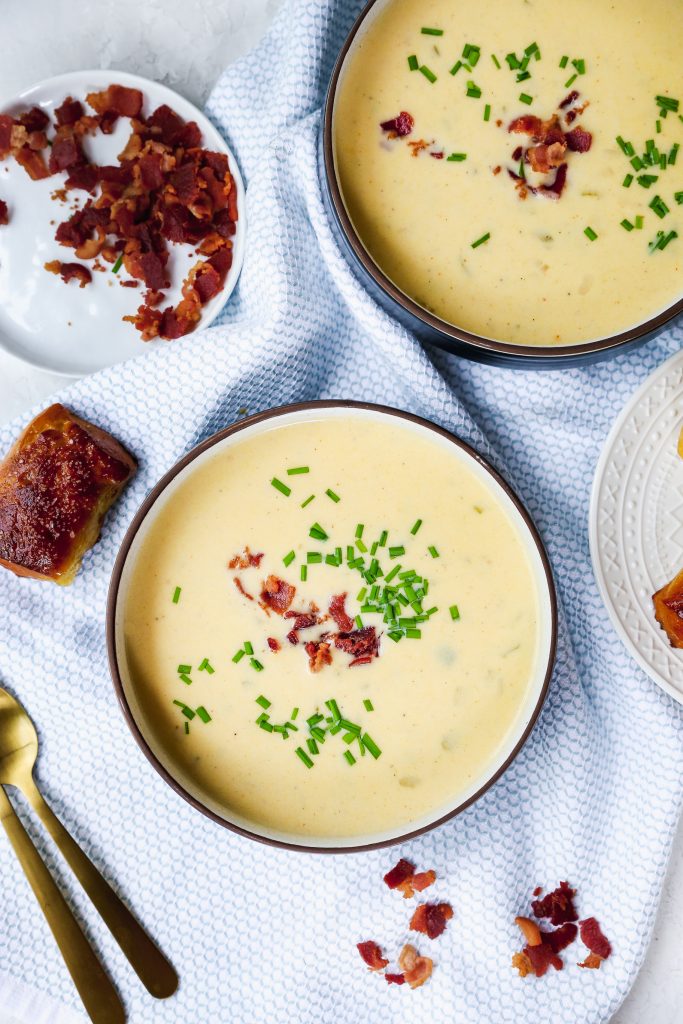 As per usual, soup is at the top of that list! It’s freaking soup season, guys!

And I couldn’t be more excited. Especially with all the rain/overcasts days we’ve had around here as of late. 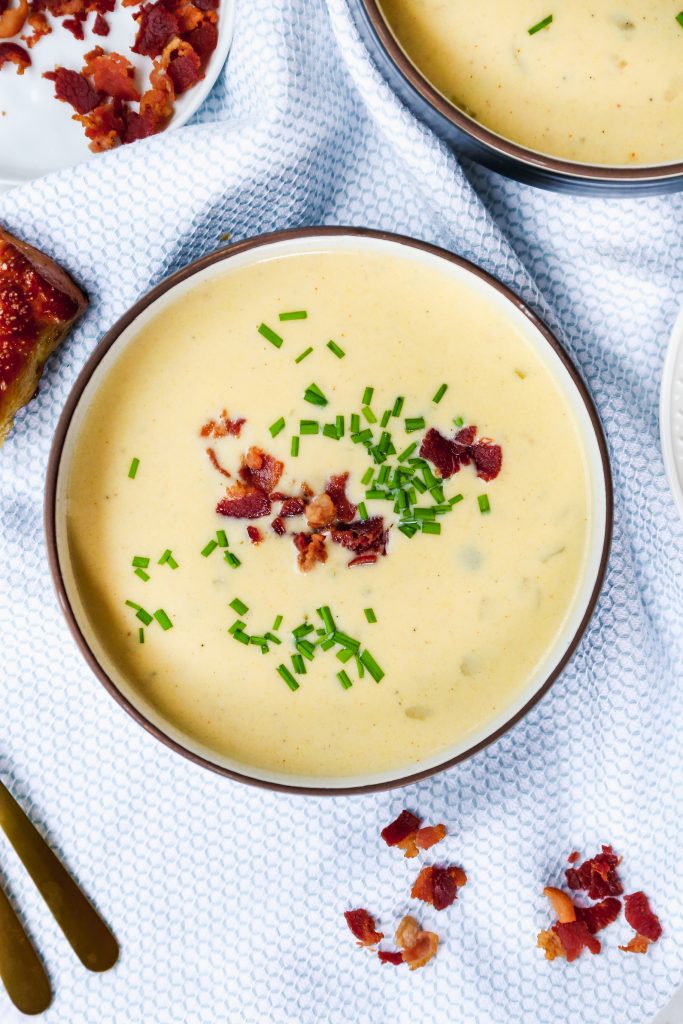 Along with my lighting of all the fall-scented candles (Bath & Body Works “Autumn” is my absolute fave) and decking the house out in a copious amount of pumpkin-themed decor, soup is destined to be in my house!

And this beer-cheese soup with bacon is something special. 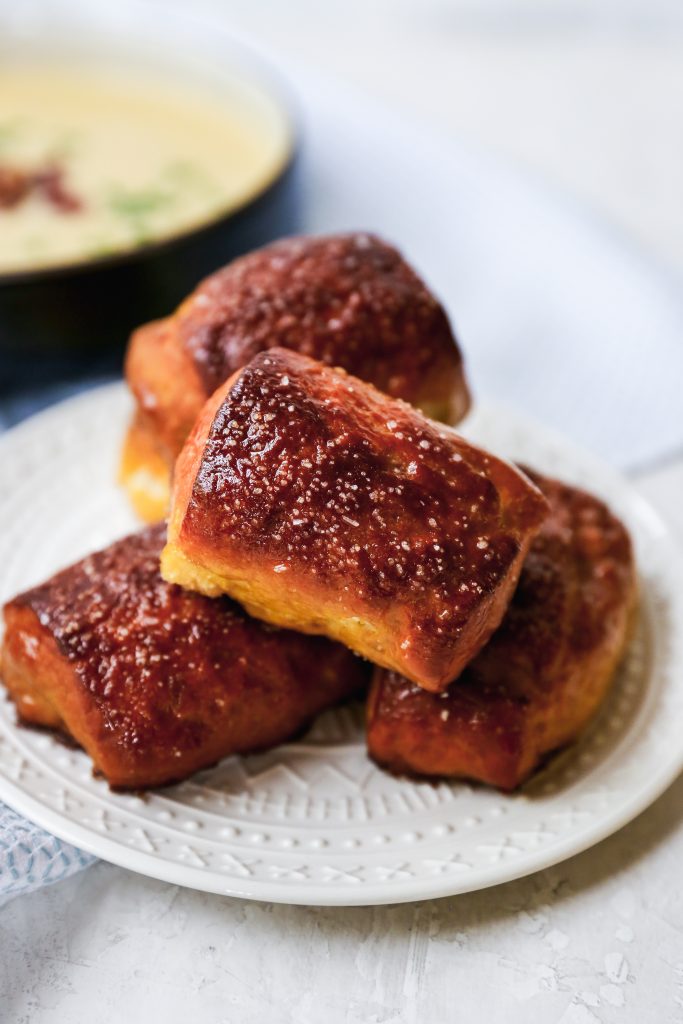 It is like beer fondue meets creamy cheese bisque. And I like to serve it with the ultimate comfort carb: soft pretzels! 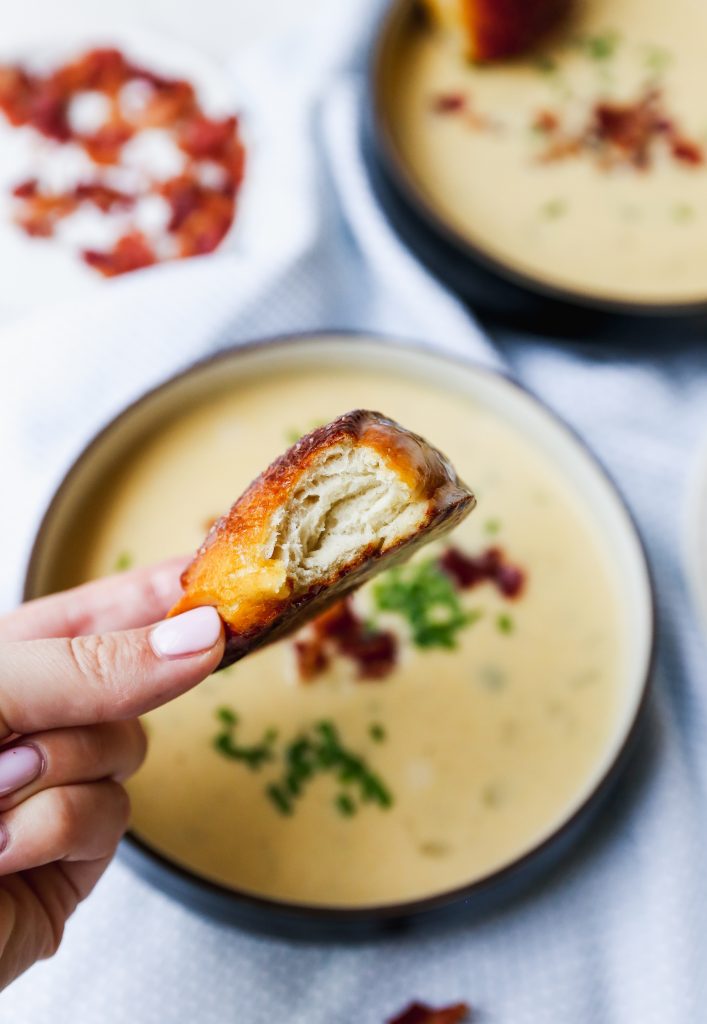 The soup itself is fairly straightforward. You sauté some veggies in some bacon drippings (oh yeah, we’re going there) until soft, add in flour to make a roux, and then deglaze the pot with your favorite beer (I actually love using “light” beers in soups like this because they don’t leave behind any bitterness), and then let things simmer away in some stock until super flavorful. The cream and cheese get whisked in during the last stage of cooking and result in the dreamiest cheese soup ever. 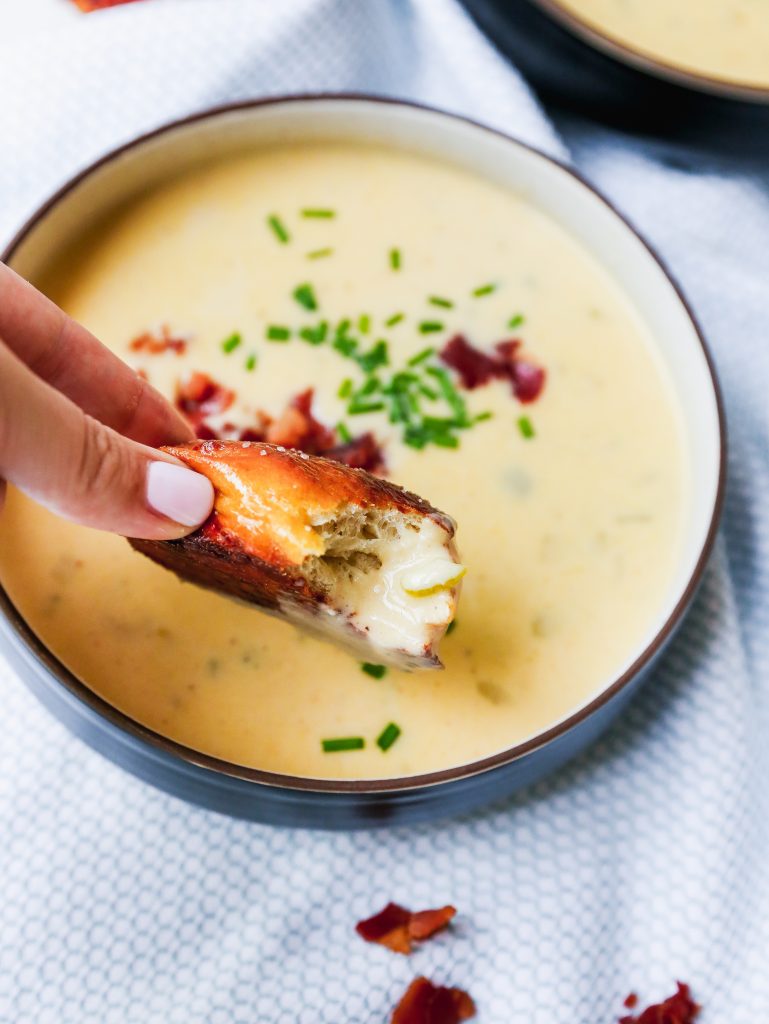 I like to garnish this soup with chopped chives and the bacon used to start out the soup. It is so good, that you don’t really even need the pretzels (I can’t believe I just said that).

In the name of indulgence and “yay fall is here!”, we’re so doing the pretzels. #worthit 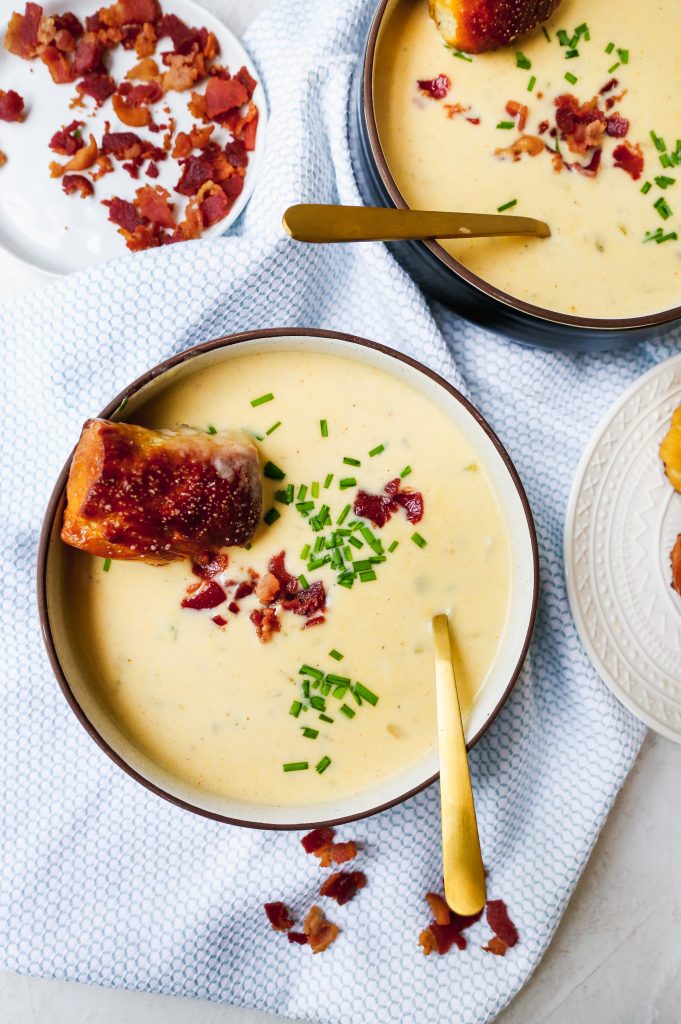 This pretzel making method is new to me. I followed the recipe on the King Arthur’s flour website because it suggested simply soaking the formed pretzels in a baking soda water as opposed to boiling them in it. SO MUCH EASIER!

I decided to give it a go, and I have to say, I think this may be my new go-to soft pretzel recipe. 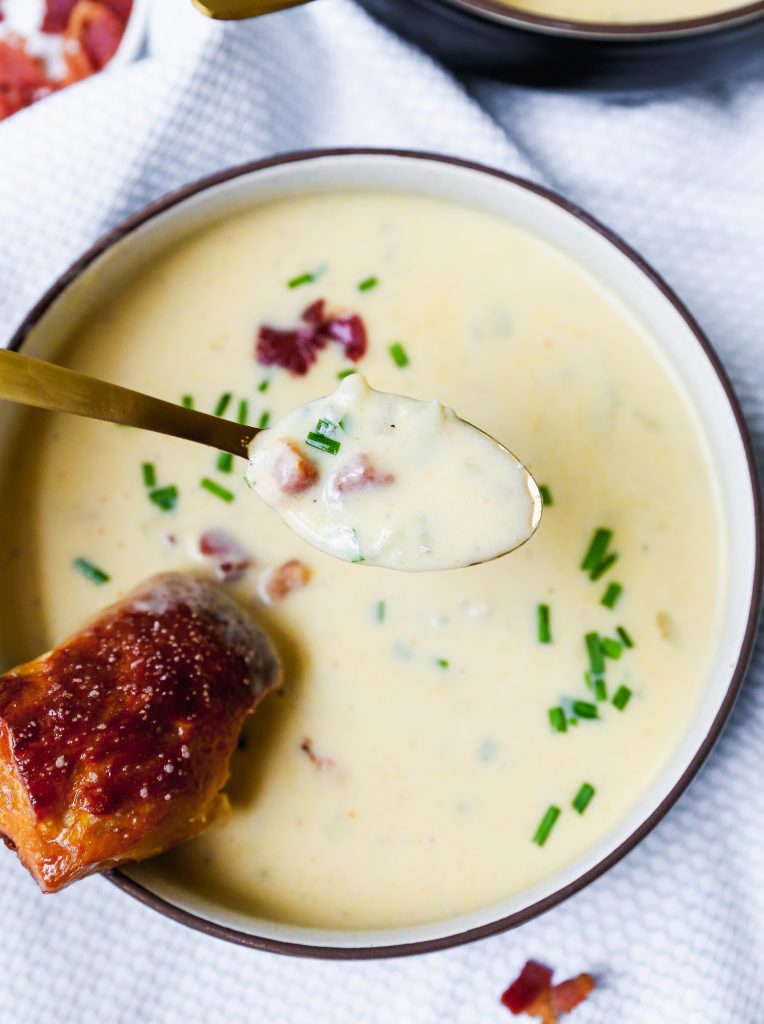 They’re so soft and pillowy on the inside with the greatest chew. The outsides get deeply golden and slightly crisp in the oven, and then they truly transform into the stuff of dreams.

They are IDEAL for dunking in beer-cheese soup. 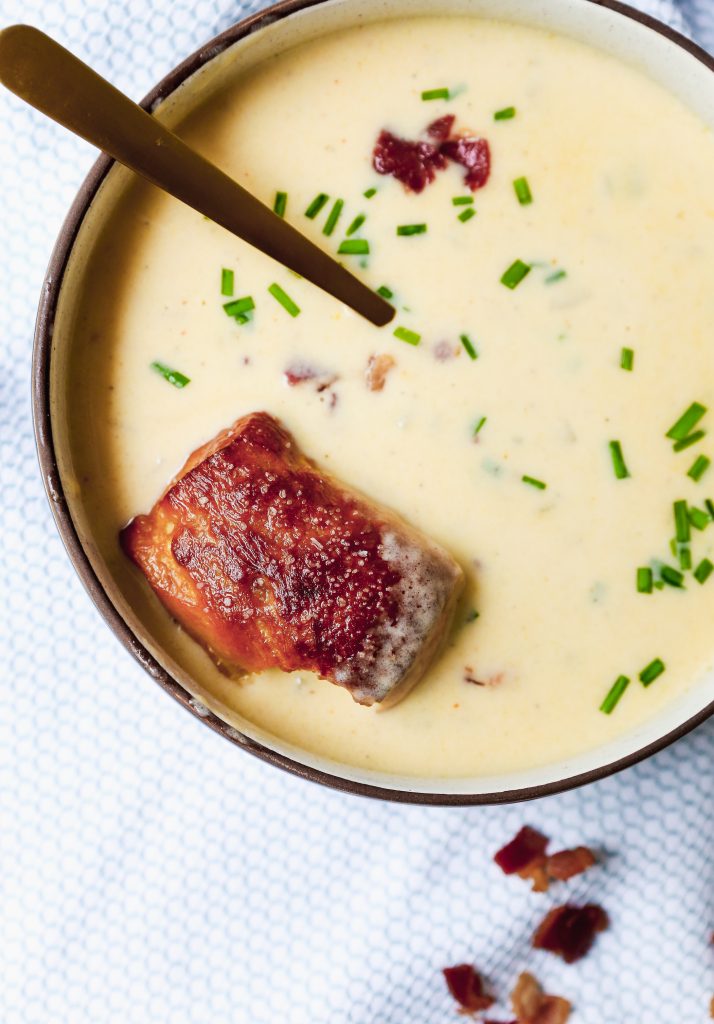 Take it from me. I consider myself an expert at this point. 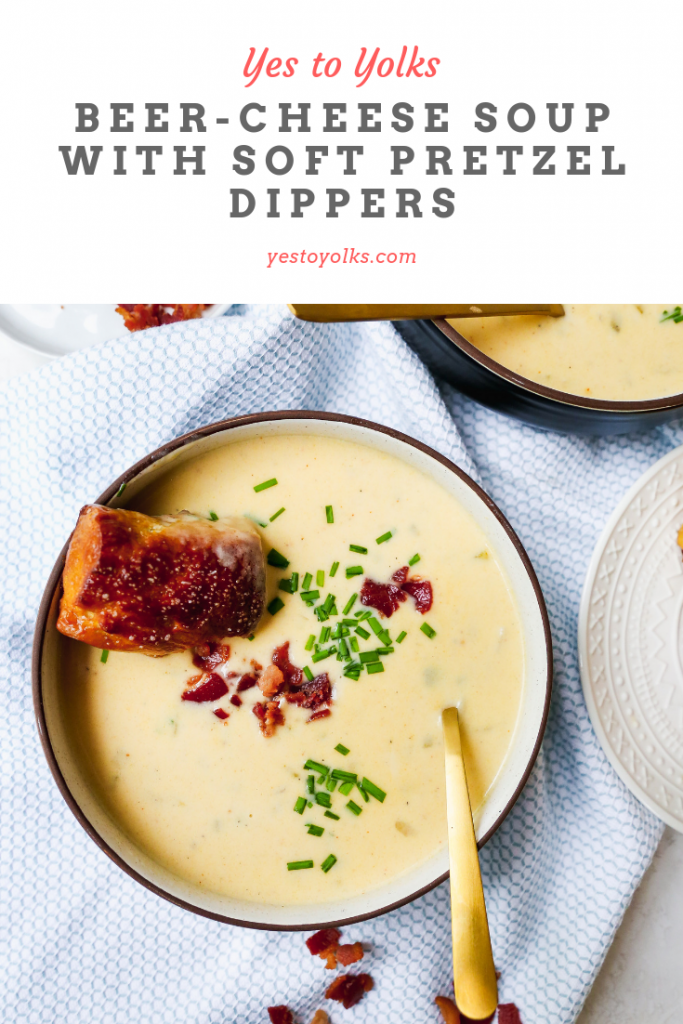