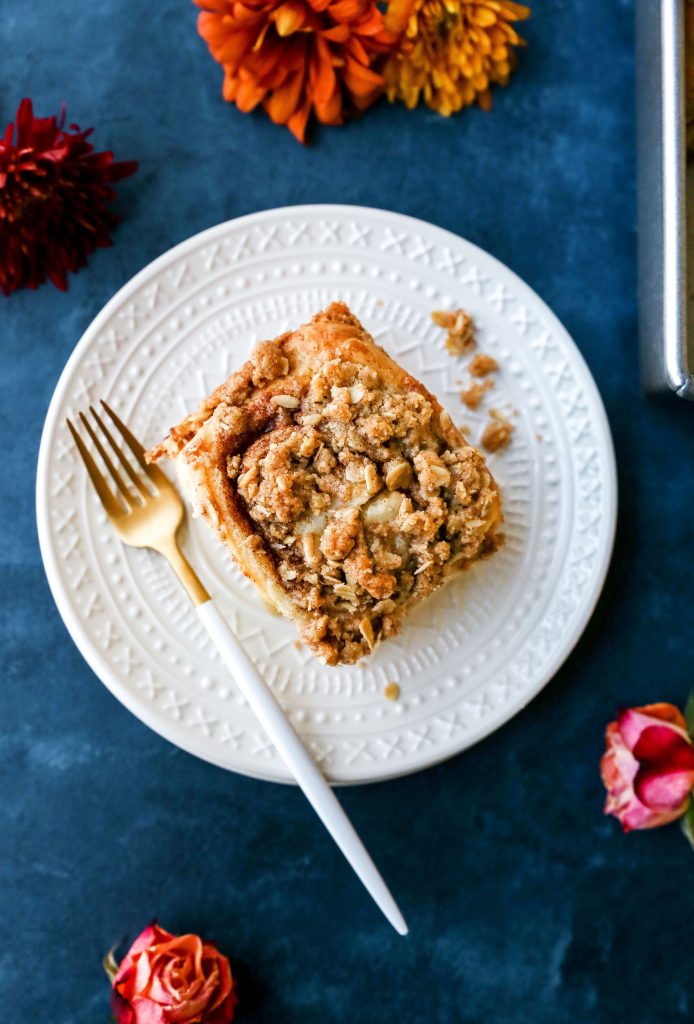 I have the mash up of all mash ups for you today! And it is very appropriate for the first day of October.

I have combined two of my favorite baked goods into one: apple crisp cinnamon rolls!

That’s right. I put apples in my cinnamon rolls and topped everything with a crunchy streusel. You won’t miss the cream cheese frosting on these babies one bit. That’s a promise. 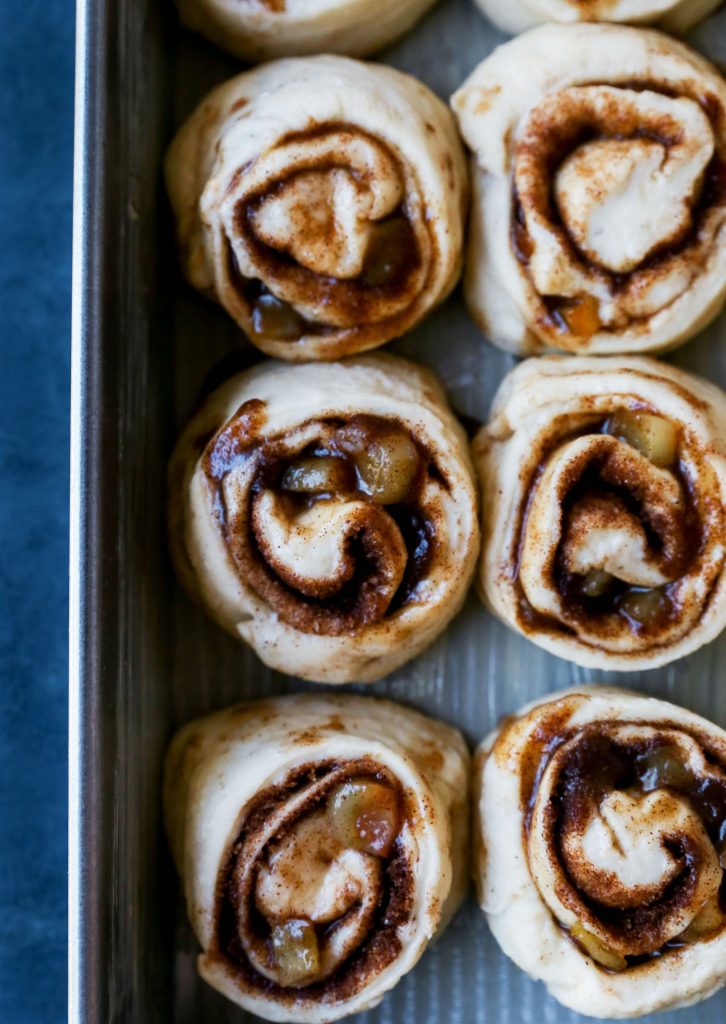 This time of year just might be my favorite for baking. Even more than the holidays. There’s just something special about turning on the oven on a crisp, cool fall morning and something incredibly soothing about making a yeasted dough to be filled and topped with all the delicious things. 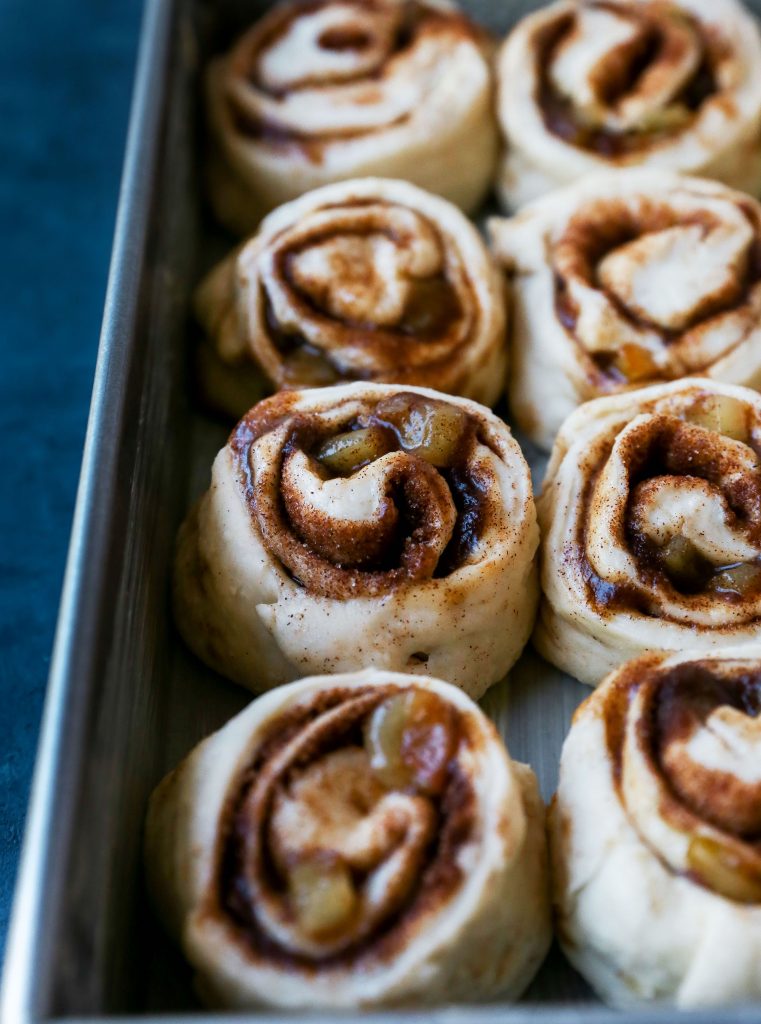 I’ve said it before: baking is therapy.

It’s a chance to step away from the busy hum of life and to focus on the simplest of things: yeast, water, sugar, flour. And the magic they make. Life around here has been full of change (and subsequent anxiety) and very, very busy. I am still looking for balance, to really gain my footing in this new stay-at-home-mom life I’m making for myself, and sometimes I just need a minute to turn my brain OFF. To focus on something simple. 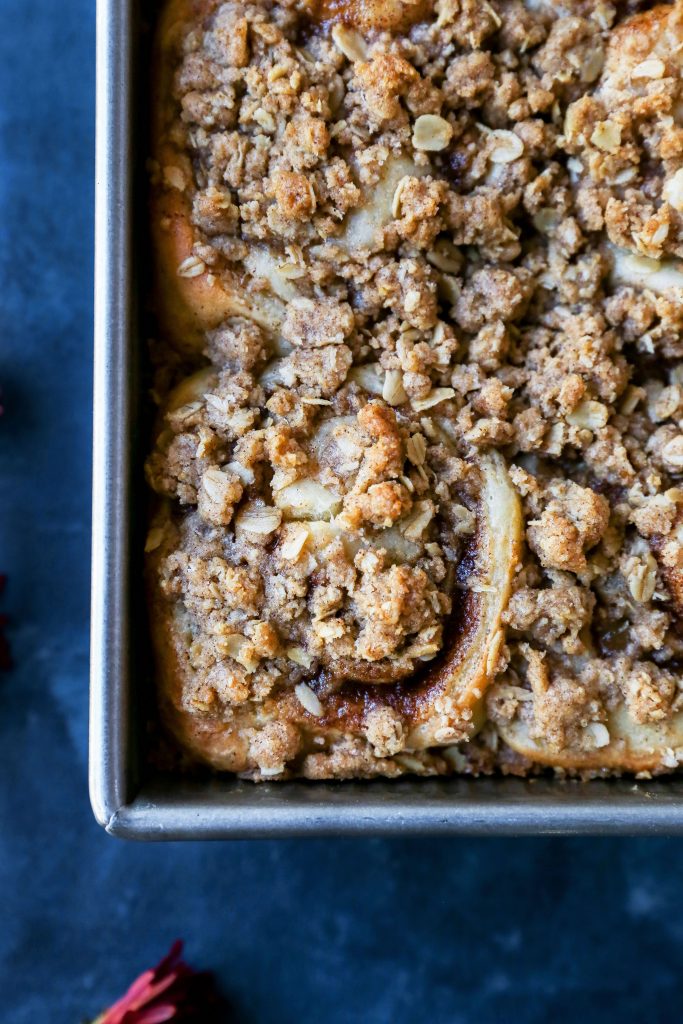 Baking has always done that for me. It’s just…soothing to my soul.

In addition to their more therapeutic uses, these apple crisp cinnamon rolls have everything you love about a traditional cinnamon roll: fluffy, soft dough, sweet cinnamon filling, and decadent swirly centers! The only twist is that sautéed apples go on the inside with the cinnamon filling and streusel goes on top instead of a more traditional icing/frosting. And take it from this cream cheese frosting lover, this version is AWESOME. 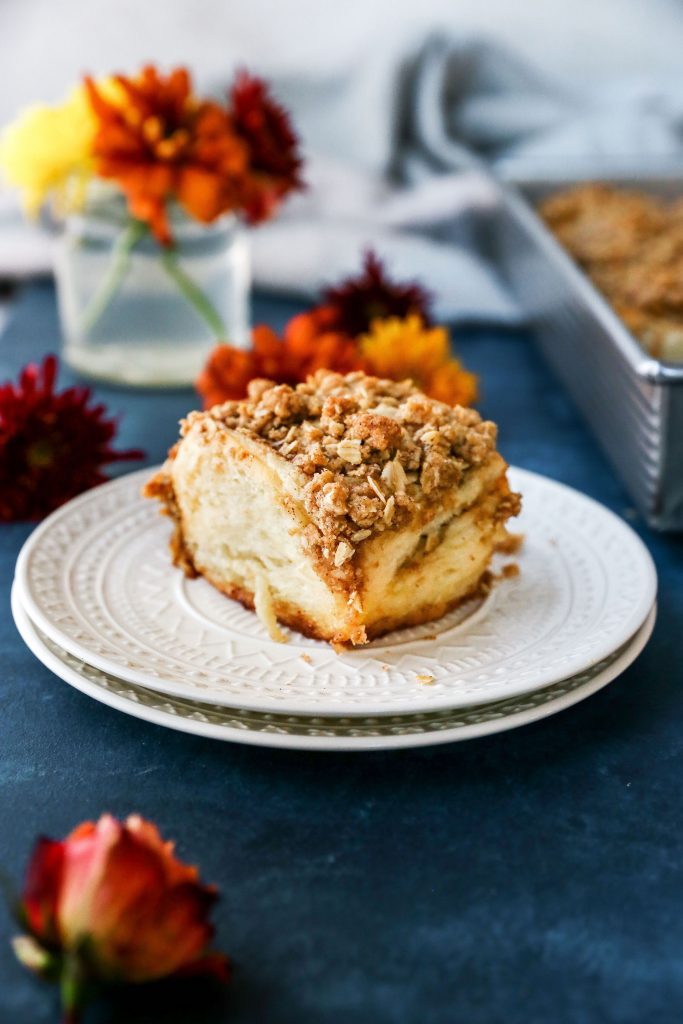 When I was brainstorming for a “fall cinnamon roll” recipe, I knew I wanted to do something with texture. I also wanted to highlight some of the fall produce (summer totally gets all the credit). Since apple season is in full swing now (I am basically hoarding honeycrisps), figuring out a way to marry apple crisp with my cinnamon roll seemed like a really good idea. 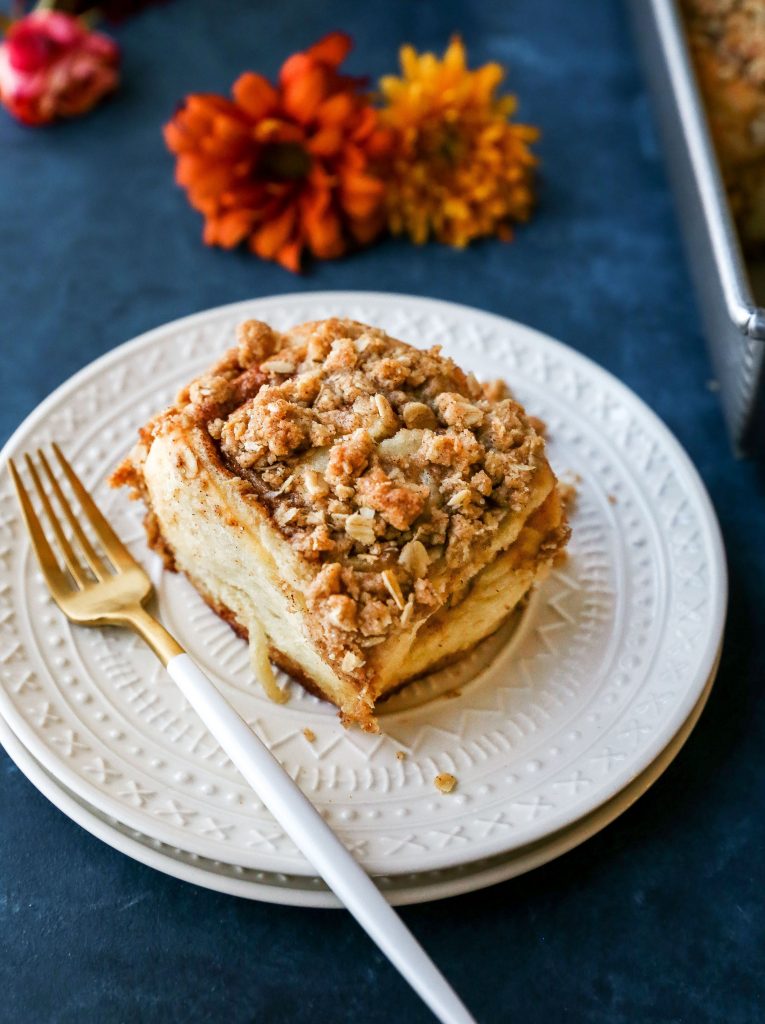 I made and tested these twice. The first batch went into work with Dan and received rave reviews from his coworkers. Someone even declared them to be “the best thing I’ve ever eaten.” The second test is what you see here in these pictures, and in my mind, they’re pretty much perfect. I tweaked one or two small details in my original test, and I have to say, I’m incredibly pleased with the results. 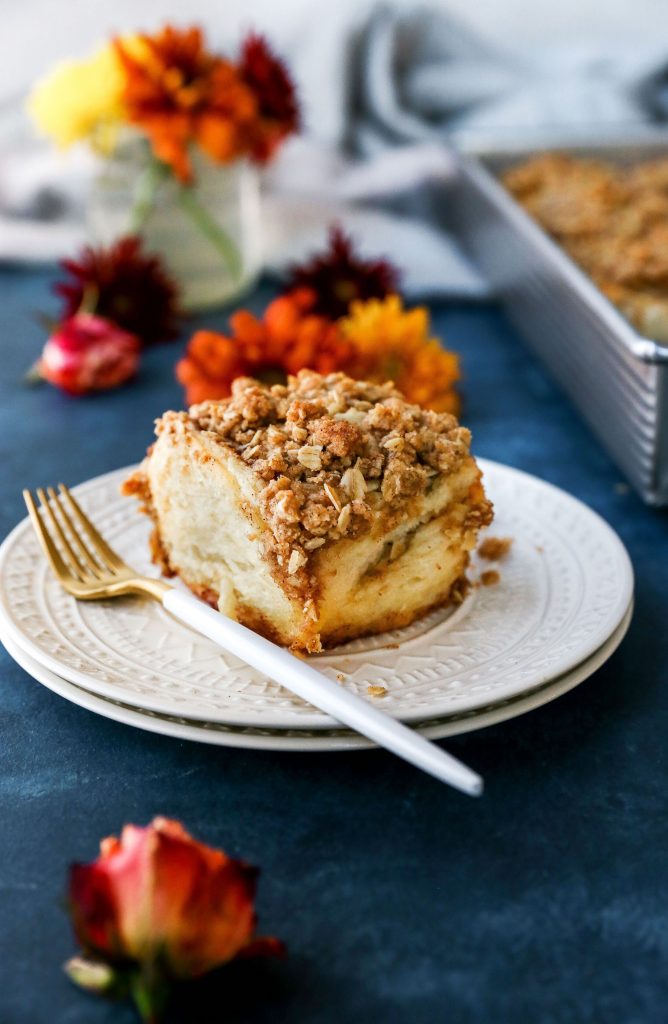 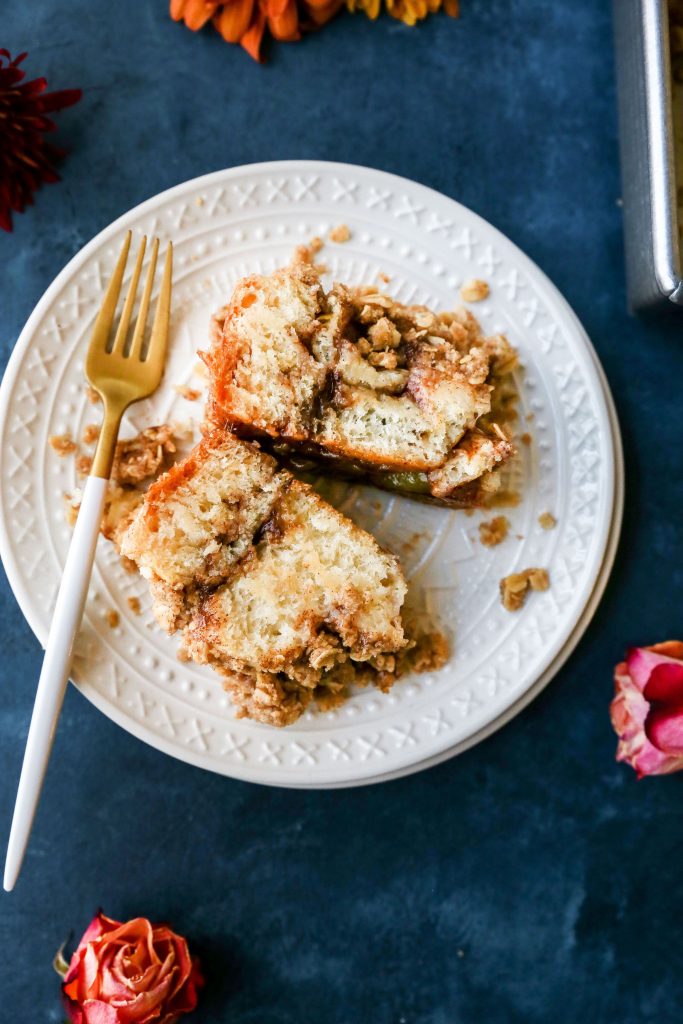 To Assemble the Rolls: 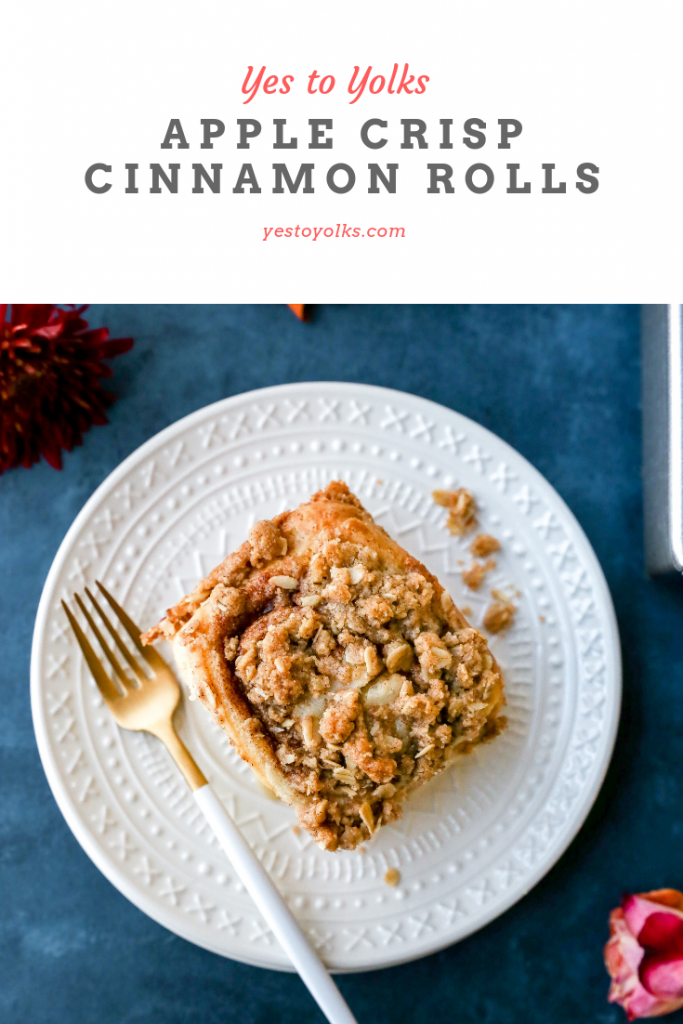