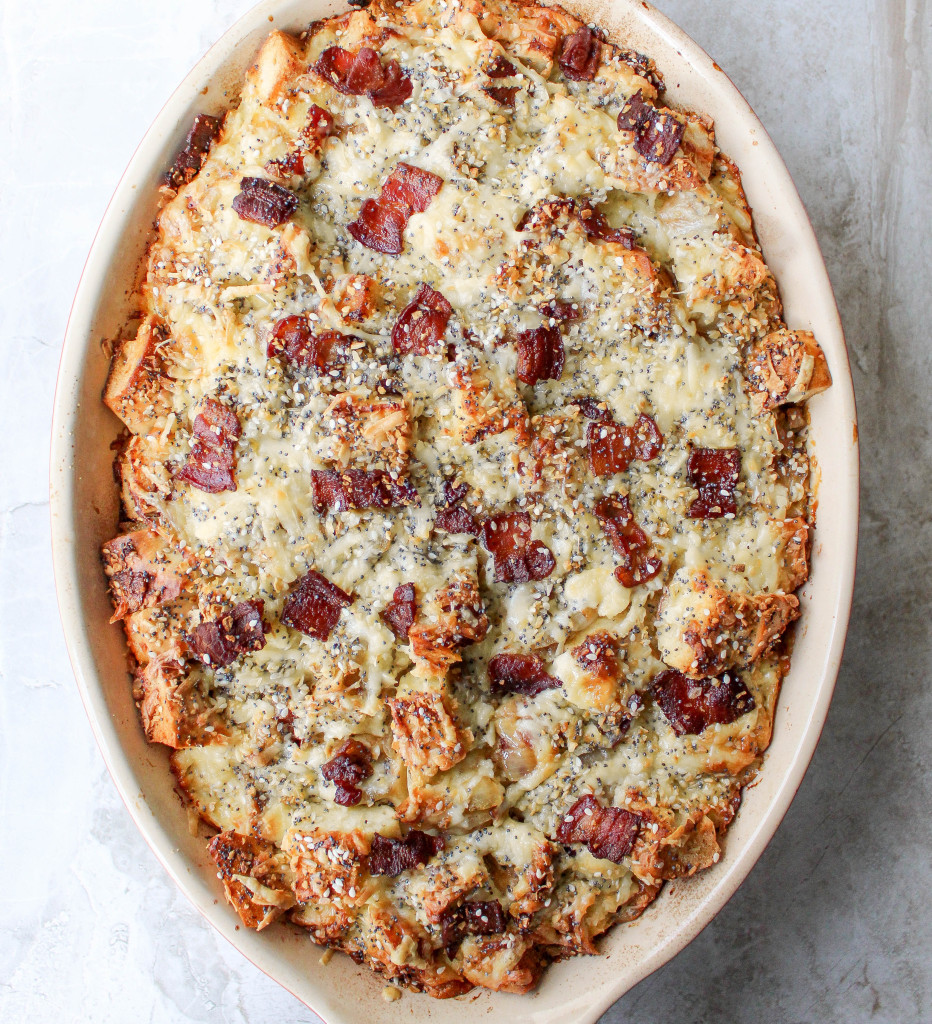 Today’s post is dedicated to my husband. My husband and his favorite breakfast item of all time: bacon, egg, and cheese on an everything bagel.

This Sunday is his first Father’s Day. And we have so much to celebrate. Indulge me for a minute while I thoroughly embarrass my husband. Get ready. I’m throwing down the mushy-gushy stuff today. You’ve been warned.

When I met Dan just over 8 years ago, I was drawn to his fun and outgoing personality (it brought me out of my very shy shell), his ability to make me laugh at the smallest of things (which is still true to this day), and his innate kindness and loyalty. We fell in love fast and hard. It was a whirlwind summer of getting to know each other and quickly becoming best friends. He is still my rock today. He calms me when I am anxious, makes me laugh (reluctantly at times) when I am angry, offers more support than I probably deserve, and holds my hand through the hard and long days. My best friend. Always. 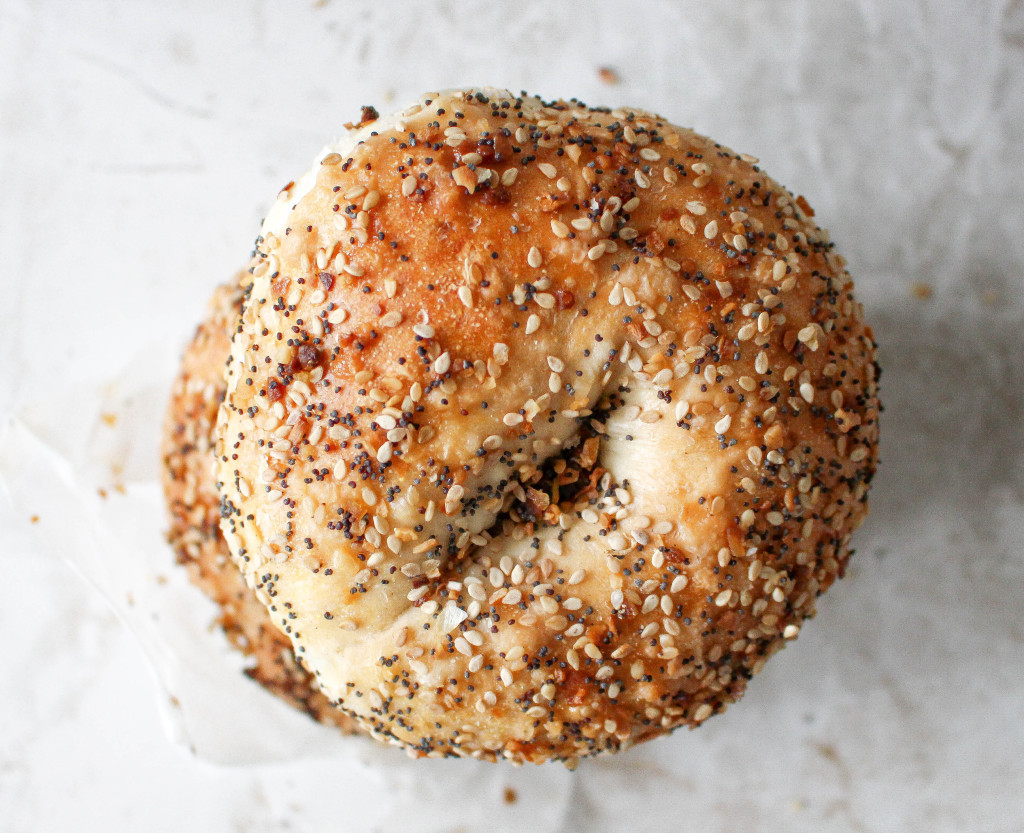 When people told me that you fall more in love with your spouse once you see them interact with your children, I didn’t quite see how that could be possible. I already loved Dan as much as I thought a person could love another. But, like with most things revolving around the unknown that is new parenthood, I was wrong. The cliché is completely, 100% true in my case. As my pregnancy neared the end, we had a role reversal. I went from being calm and collected and overall very “chill” about impending motherhood (traits that you normally would not use to describe me) to feeling panicked and unprepared and extremely nervous about my ability to “mother” anything (basically, more myself). Dan, on the other hand, went from being nervously detached and anxious to super excited, relaxed, and reassuring. Once again, he was my rock.

With each breath and push that brought our son into this world, Dan was there, breathing and pushing along with me. I remember feeling irritated at his earnest “breathing through it” faces. He wasn’t, after all, doing even a fraction of what I was doing. I may have squeezed his hand extra hard during those moments. Looking back now, I have to laugh at the genuine look of effort he plastered on his face as I pushed through each contraction. He was in it. 100% committed. Because that’s how he is. And that’s part of why I love him. 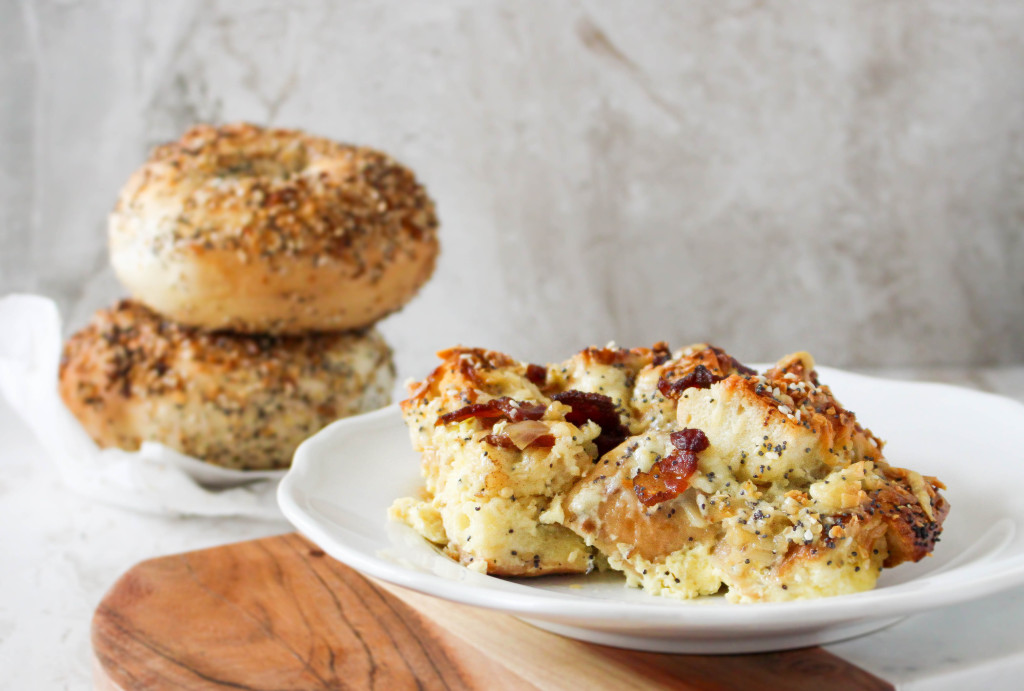 When I saw him holding our son for the first time, well, that feeling is almost indescribable. It was a mix of so many emotions. Love being the most prominent. A close second was a feeling of confidence. A feeling of yes, we could do this. Together.

Not only has Dan been there every step of the way as we plunged into this new chapter of our lives, but he has exceeded my expectations time and time again. When I was weighed down with exhaustion of sleep deprivation and postpartum hormones to the point of barely being able to move from our bed, three weeks in, Dan took the 2 AM shifts of rocking the baby to sleep or changing a dirty diaper or making sure the swaddle was just so. He made sure both the baby and me were OK at all times. He calmed me when I had my rare “OMG, I CAN’T DO THIS” moments in the middle of the night, kept the house in decent shape and our fridge full, waited on me hand and foot as I was strapped to the couch in nursing mode for most of the day, and shared in my over-the-moon bliss when Kieran sleepily smiled at us for the first time. When we faced some minor but scary health challenges with Kieran in the months that followed, he held it together and was a voice of reassurance and calm. He coached me through it, just like he always does.

He’s been there. Every step of the way. And I know he’ll approach the rest of fatherhood the same way. Seeing him with our son, relishing in his little laugh and gigantic smiles, makes my heart fuller than I ever could have imagined. Watching this man turn into a father has been just as rewarding for me as it has been for him. This child binds us together in a new way, and I so look forward to all that comes with that.

Had enough sap? Are you even still reading? Or are you trying to hold back the figurative gag? Hah. I know. That was a whoooole lot of mush. I can’t help it. It needed to be said. Now that I have embarrassed my husband, who shies away from this sort of thing in a public forum, I’ll sum up with this: Kieran is a very lucky little boy. I am a very lucky woman. And we love you. 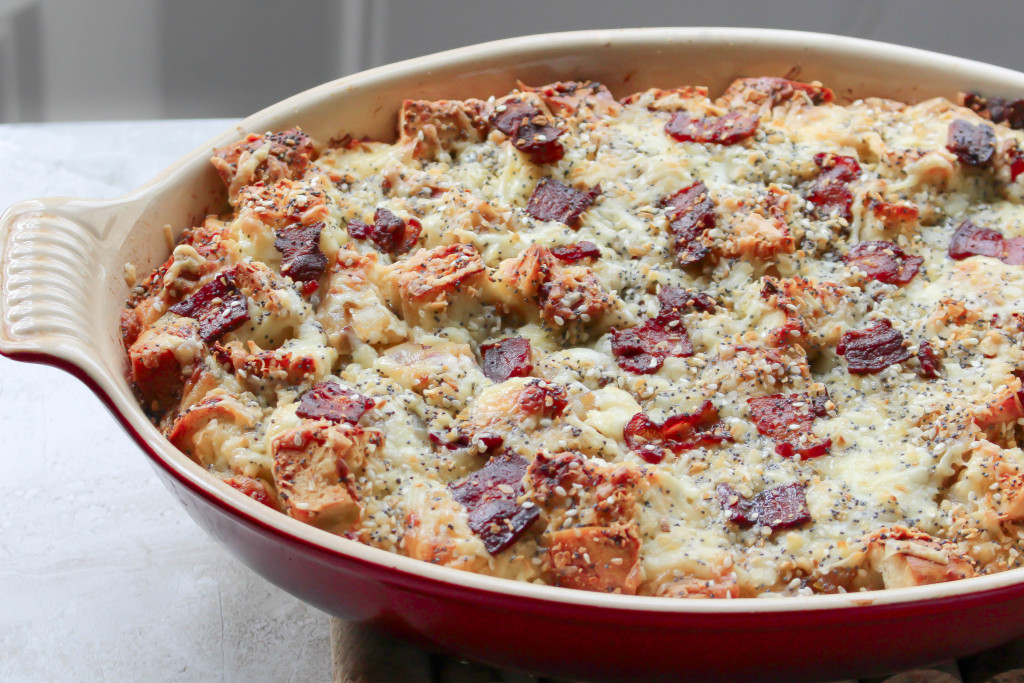 And now onto the most important part: breakfast sandwiches (Dan is probably breathing a sigh of relief at this moment).

To celebrate Dan on his first Father’s Day, I’ll be making his favorite breakfast sandwich in casserole (or strata) form. Airy egg custard studded with bacon bits, creamy sharp cheese, and the flavors of an everything bagel…it really is like biting into that perfect deli breakfast sandwich. And for my husband, it really is perfection. Breakfast bliss, if you will. Whenever we order breakfast sandwiches from our local bagel shop, Dan gets the same thing every single time: “Everything bagel with bacon, egg, and extra cheese.” He even orders it the same way each time, using those exact words in that exact order with the same emphasis on EXTRA cheese every time. They probably know it’s him calling but still indulge him each time.

My strata strays from that predictable bagel order in two ways. First, I swapped in gruyere and cheddar cheeses for the standard American he gets on his sandwiches. Secondly, the more obvious change: I made a big enough, non-sandwiched portion to be shared among several people, which makes this dish PERFECT for a Father’s Day breakfast or brunch. When I tested this recipe out several weeks ago, it evoked the exact reaction from Dan that I was hoping for as he ate it. The same reaction he has when he first bites into that toasty bagel sandwich as the scents of bacon and gooey cheese waft through the air: “This. Is. AWESOME.” 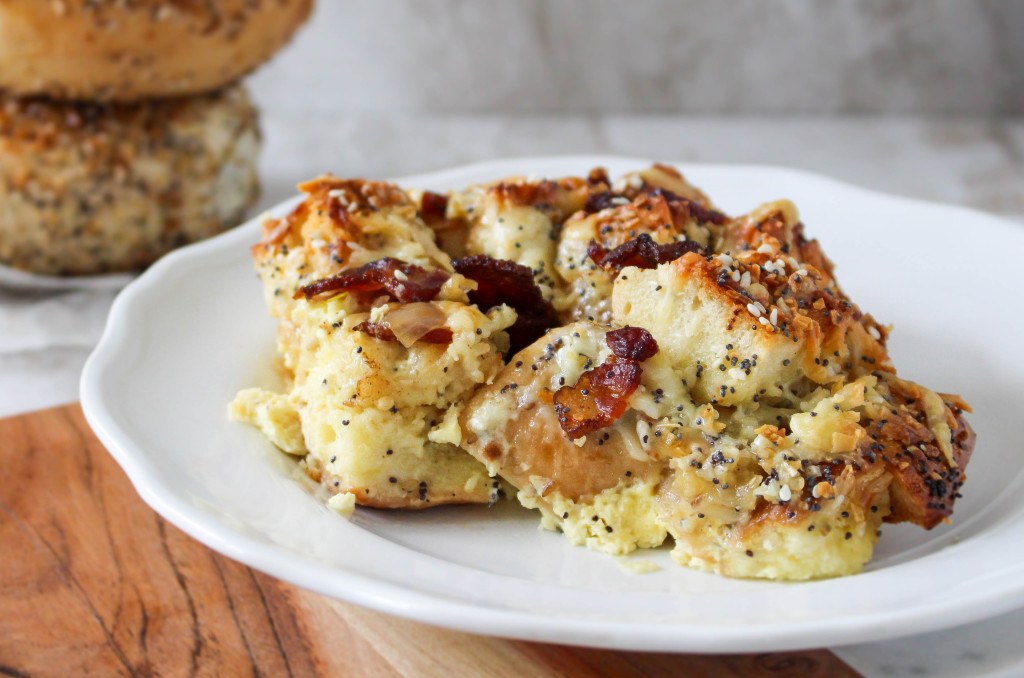 I agree with him. This strata IS awesome. Just like that beloved bagel sandwich. Just like Kieran’s dad. 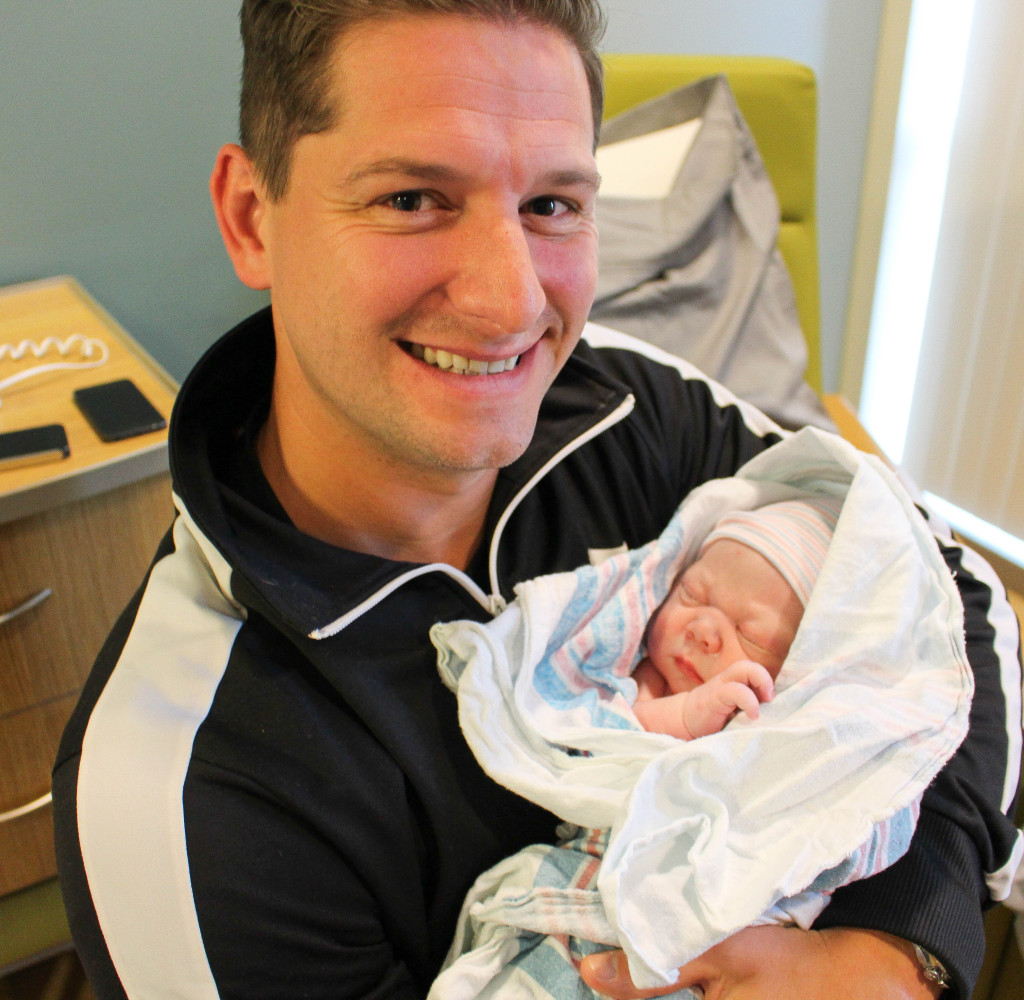 Happy (early) Father’s Day to all the dads out there!

For the “Everything Bagel” Spice: