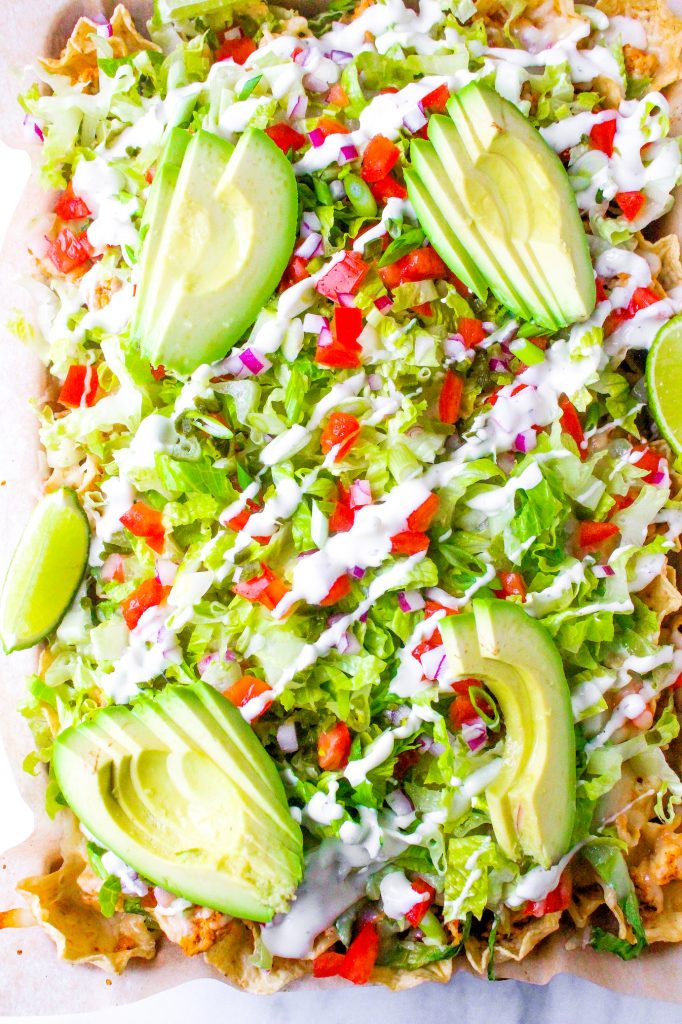 Do you ever get into a full-blown food obsession? Like, you cannot stop thinking about said food and you must have it on a weekly or even bi-weekly basis? When a craving hits, there is nothing in this world that will satisfy it except the real deal? At your hungriest moments, said food is all you can freaking think about?

Well, that’s the basic story behind these nachos. Dan and I have been enjoying a SERIOUS love affair with these nachos for weeks now. And there’s no end in sight. While they may seem like ordinary nachos, they are anything but. These are of the EPIC variety. 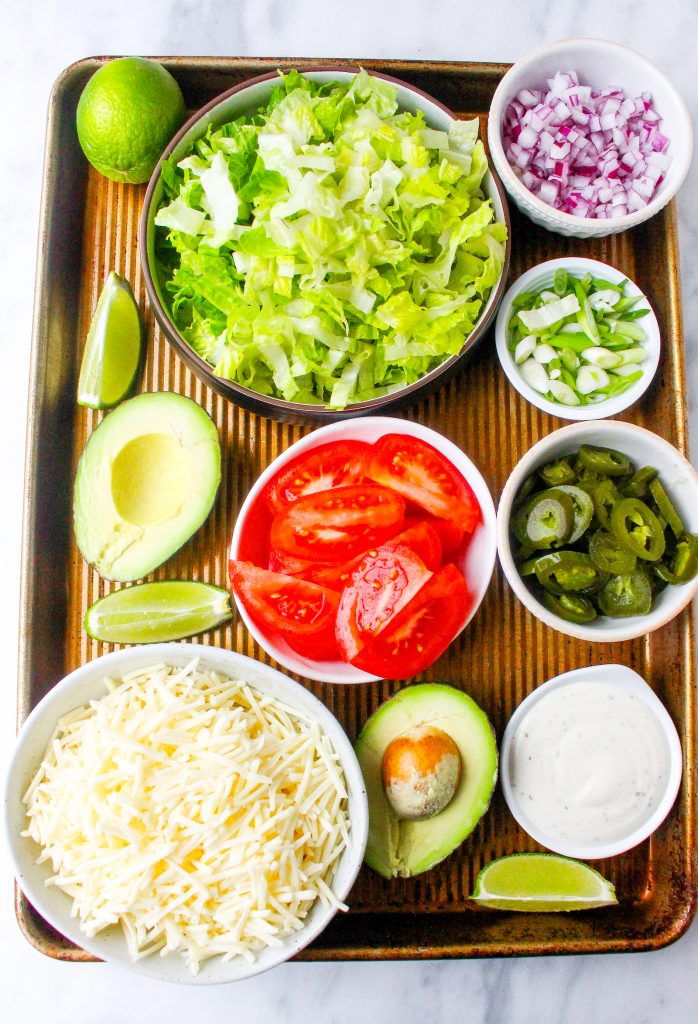 Allow me to explain.

Several weeks ago, Dan and I were trying to figure out a fun munch for a football game we were settling in to enjoy. We shot quite a few ideas back and forth and we finally landed on nachos. But somewhat (that’s the key word) healthier nachos. Nachos that wouldn’t make us feel completely and totally disgusting afterward.

After much mutual brainstorming, we came up with chicken nachos with a sort of zesty salad on top. Yup, taco salad meets nachos. Sound strange? Stay with me. These will change your life. 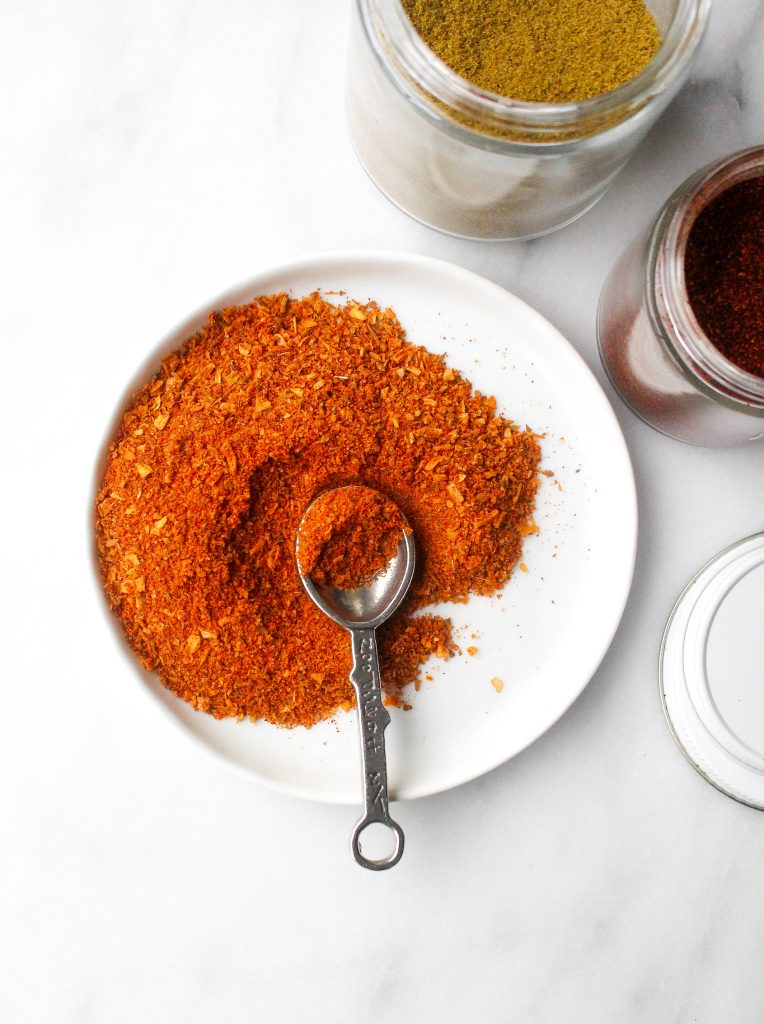 The beginnings of these nachos are pretty basic. Ground chicken gets seasoned up with our favorite spices and cooked until crumbly and juicy. The chicken then gets layered on tortilla chips (the “scoop” variety really works best here) with cheese and all sorts of fun toppings. Nothing out of the ordinary, right? Wrong. This is where things take a turn…for the awesome.

Instead of baking the nachos with just chicken and cheese and then piling all the fresh ingredients on top after they’re baked, we went with a new-to-us approach and loaded half of the fresh “salad” ingredients under the cheese layer so that they were also baked into the goodness. Holy genius! This was actually my husband’s idea, so I gotta give credit where credit is due. 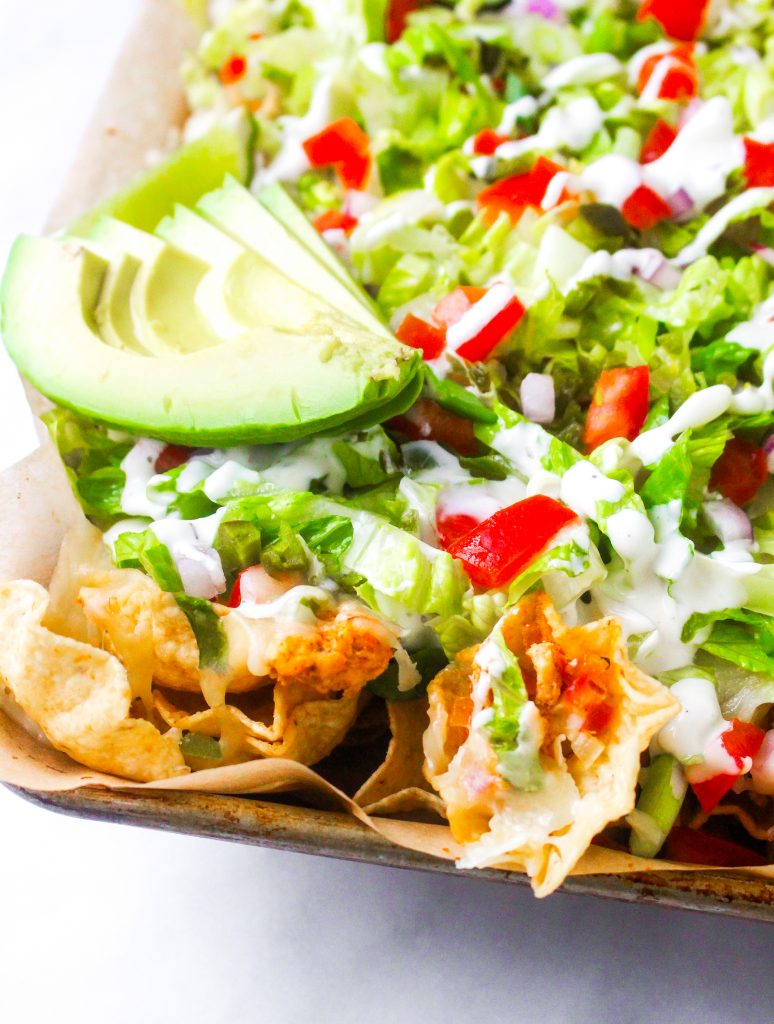 The remaining “salad” ingredients get loaded up on top of the hot nachos, spritzed with copious amounts of lime juice (a serious must – it totally makes these), and a drizzle of ranch dressing. The resulting texture and flavor bomb is incredible. You’ve got crispy chips, melty cheese, seriously flavorful chicken, and tonssssss of freshness with the salad ingredients layered throughout. Each bite is different and delicious. We are completely and utterly obsessed… I actually don’t think we’ve ever made the same thing so many times in such a short period of time. 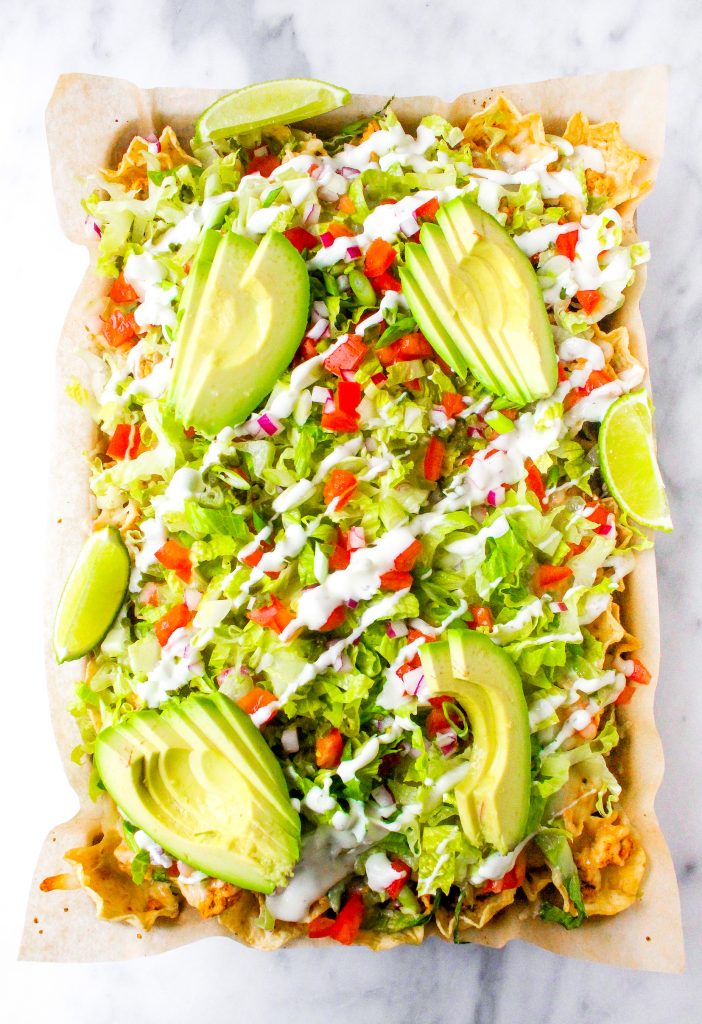 Meaning, I’ll have a whole week of meals planned out and shopped for, and Dan will come home from work one night and give me a look. A look that says “I want the nachos.” I immediately give in and drive to the store to get the ingredients. Screw the soup and sandwiches I had planned for the night. Nachos it is!

Because we love these so much and have been eating them at least once a week, I have added all the ingredients to my weekly grocery staples. We ALWAYS have these ingredients on hand (and if not, we make an emergency run for real). Like, always and forever. 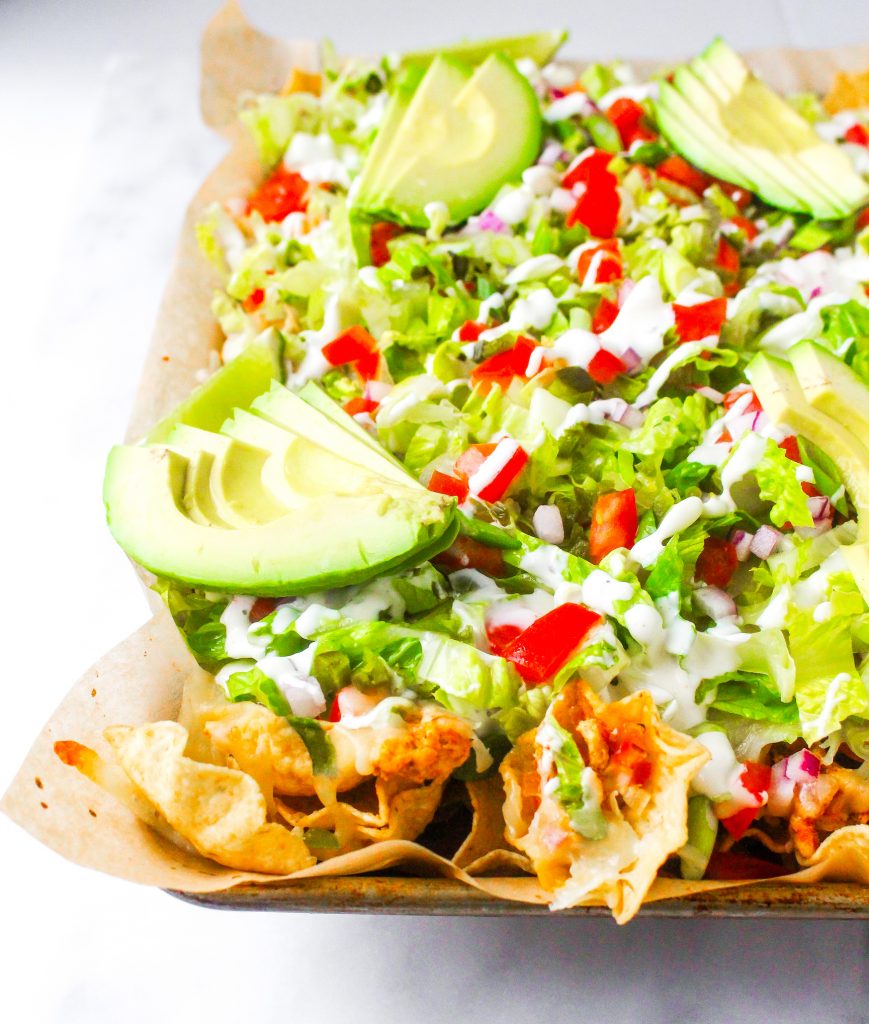 I know that these look like just any other chicken nacho, but I’m telling you, it’s like a fresh flavor explosion in your mouth. You may never go back to any other nacho recipe again. They make you feel healthier, too. It might be an illusion…the cheese and chips still exist under all that salad. Buuuut some salad is better than no salad, right?! Right. 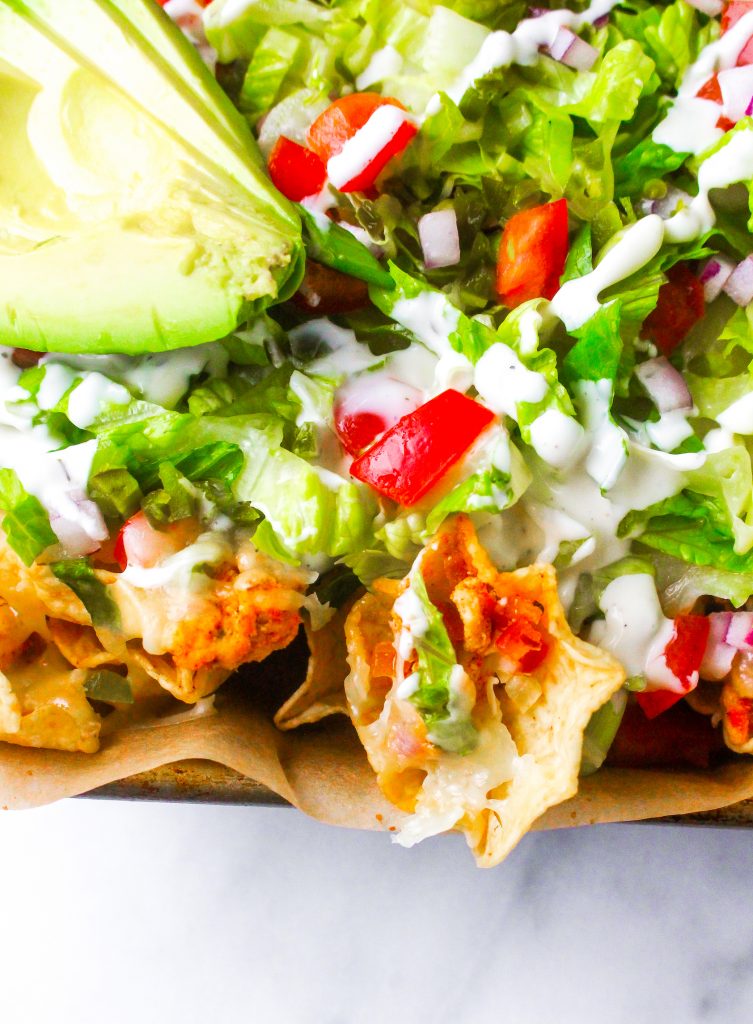 C’mon, get obsessed with us. Super Bowl weekend is the perrrrfect excuse.