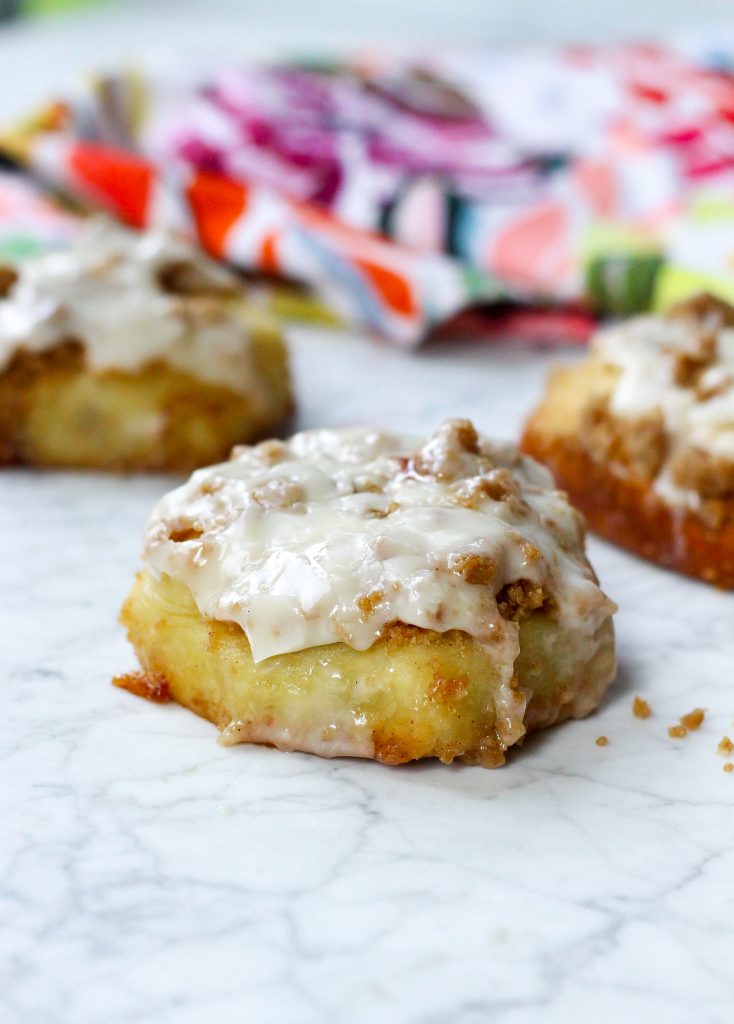 The coffee cake, that is. 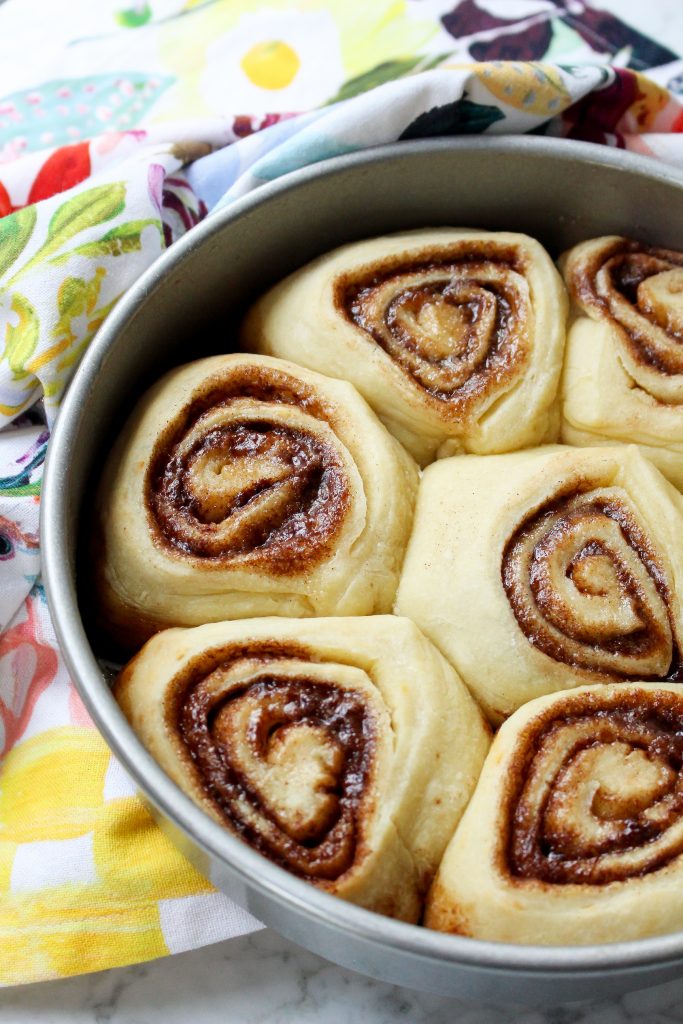 You may think that I have lost my damn mind, but I think this recipe is kind of…genius. I am generally a modest person, too, so for me to say that really means something. These are incredible, guys. I combined two of the best breakfast baked goods into one, and there is no going back. 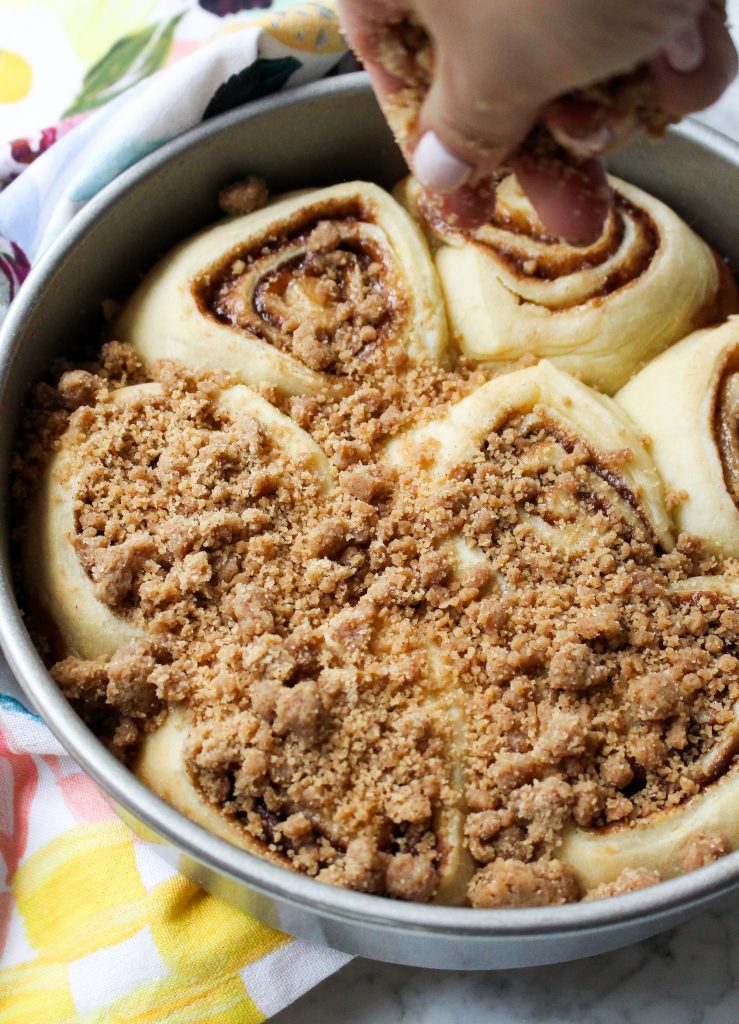 These impossibly fluffy and tender cinnamon rolls are topped with a TON of coffee cake streusel (because that is always the best part of any coffee cake, right?) and then drowned in a ridiculous cream cheese icing/glaze situation.

It is insanity. And genius. All at once. 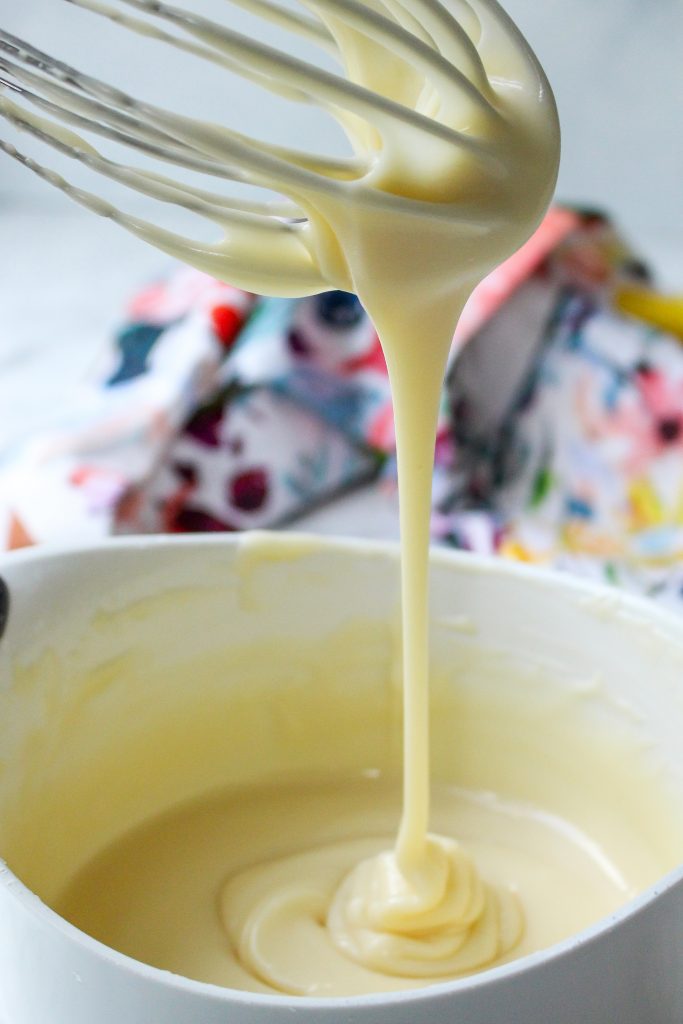 The thing is, I have always been a HUUUUGE fan of cinnamon rolls.

On trips to the mall with my mom as kids, my sisters and I would always hope and pray that a Cinnabon cinnamon roll was in our futures. We kept our nagging and begging to a minimum, patiently walking around the mall and into stores we could care less about, and sometimes my mom would reward us with a cinnamon roll. We would all fight over the center of the cinnamon roll, too, because that’s the best part (duh). It’s where all the butter and sugar meet in all their gooey, glorious goodness. 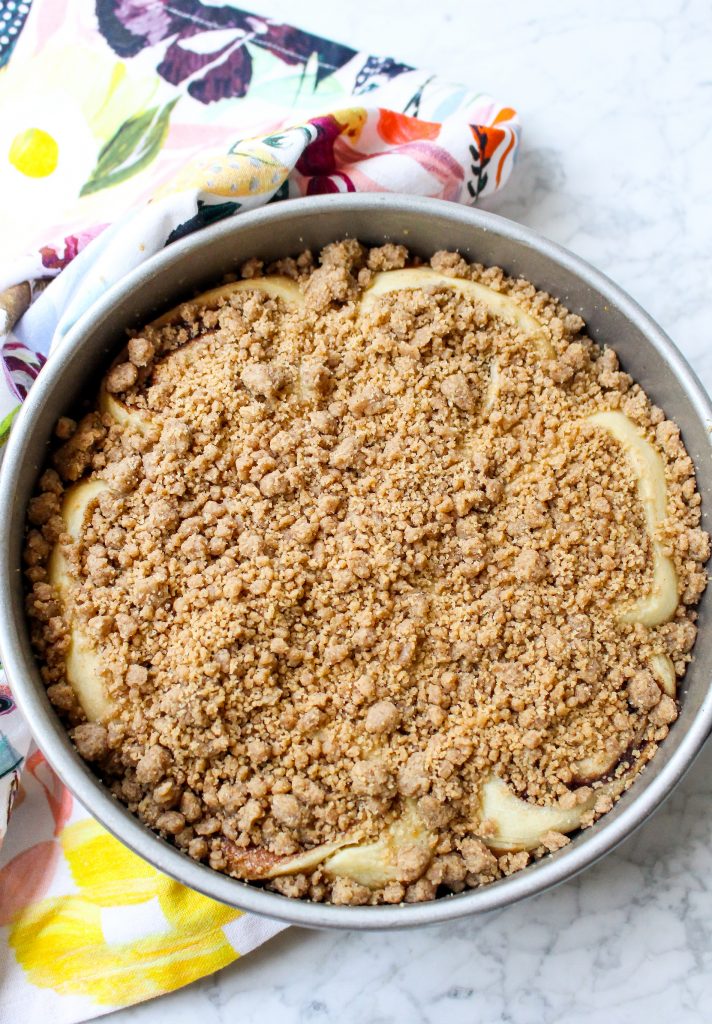 We also ate a lot of those cinnamon rolls that come in a can with a little tub of frosting to schmear on them once they come out of the oven. We loved those. Those were a special treat, too. But when we saw the can in the fridge, we were always super excited. 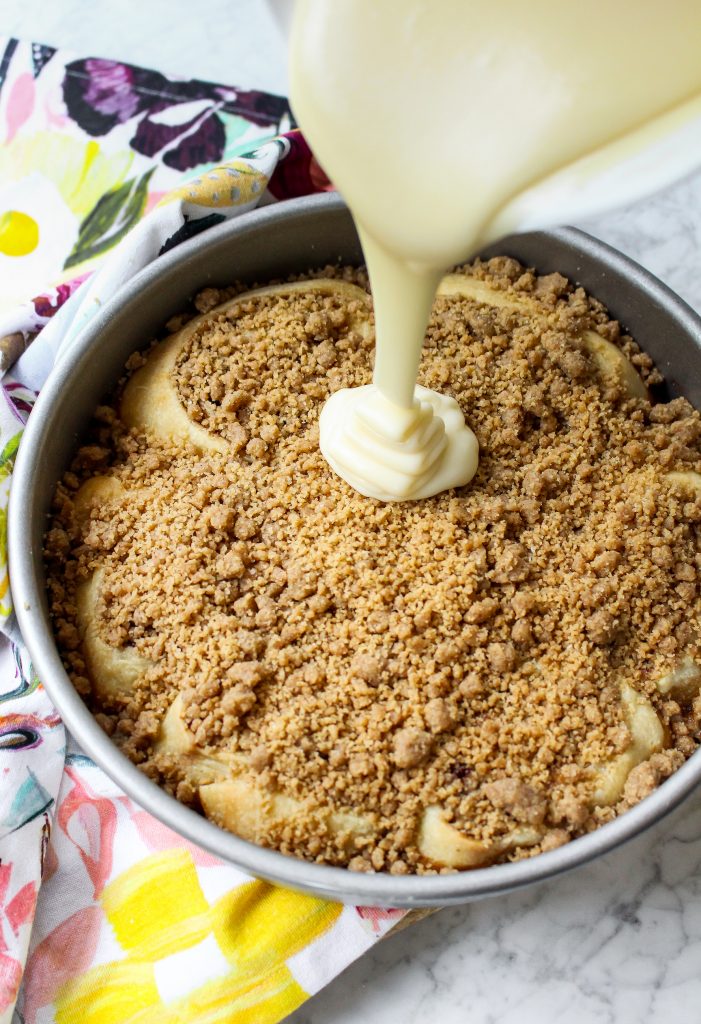 As a young adult, I started making my own cinnamon rolls from scratch. And I gotta tell ya, nothing else compares. Once you do it, you may never eat another Cinnabon or canned cinnamon roll again. They’re just very…special when made at home. They take a little bit of time for rising/proofing/other fancy baking words, but the actual hands-on process of making them is easy! You just have to be ready to invest a little extra time. 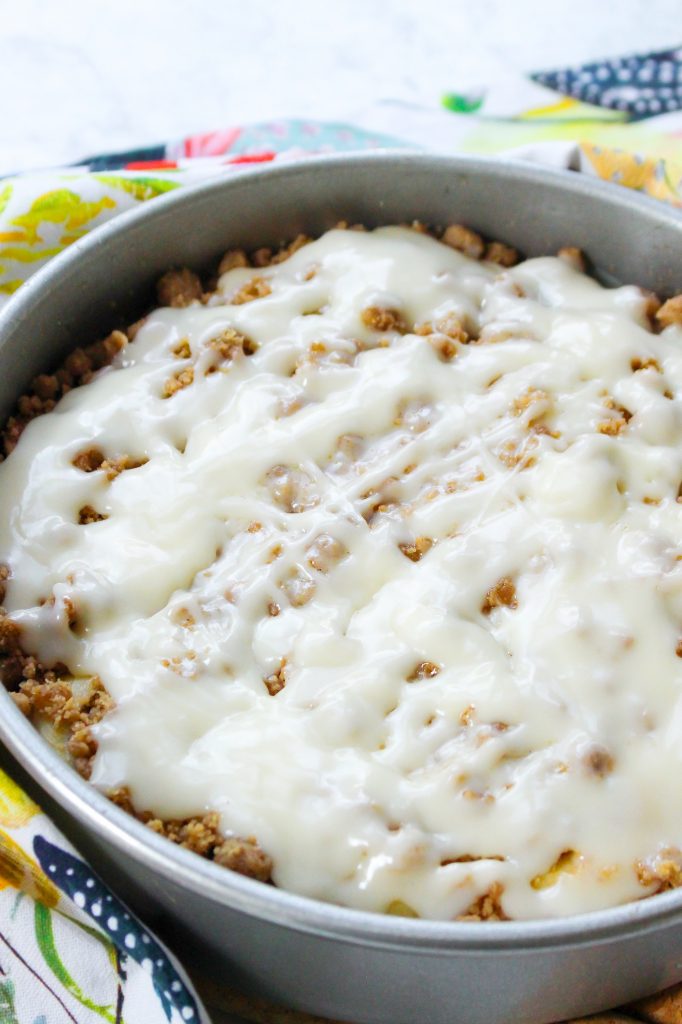 For that reason, I usually save cinnamon rolls for special occasions, like Christmas morning or for a family brunch, but when I got the idea of topping cinnamon rolls with the best part of coffee cake (STREUSEL!), I couldn’t wait for a special occasion to arrive. I had to make them immediately. And tell you guys alllll about them! 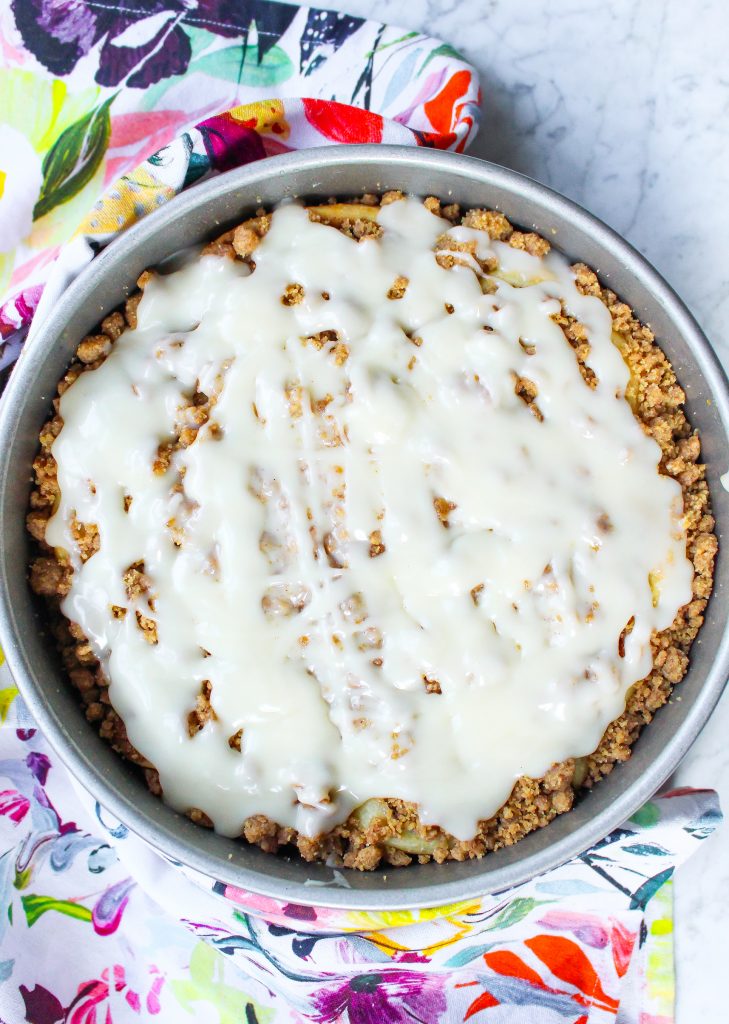 Guess what? My husband thinks that these may be the best cinnamon rolls yet! He was not shy about diving right in when he saw them sitting on the counter. I promptly packed the remaining rolls up and sent them to work with him the next morning. It was for his own good, haha. The coworkers’ reviews aligned with his – these were something special. 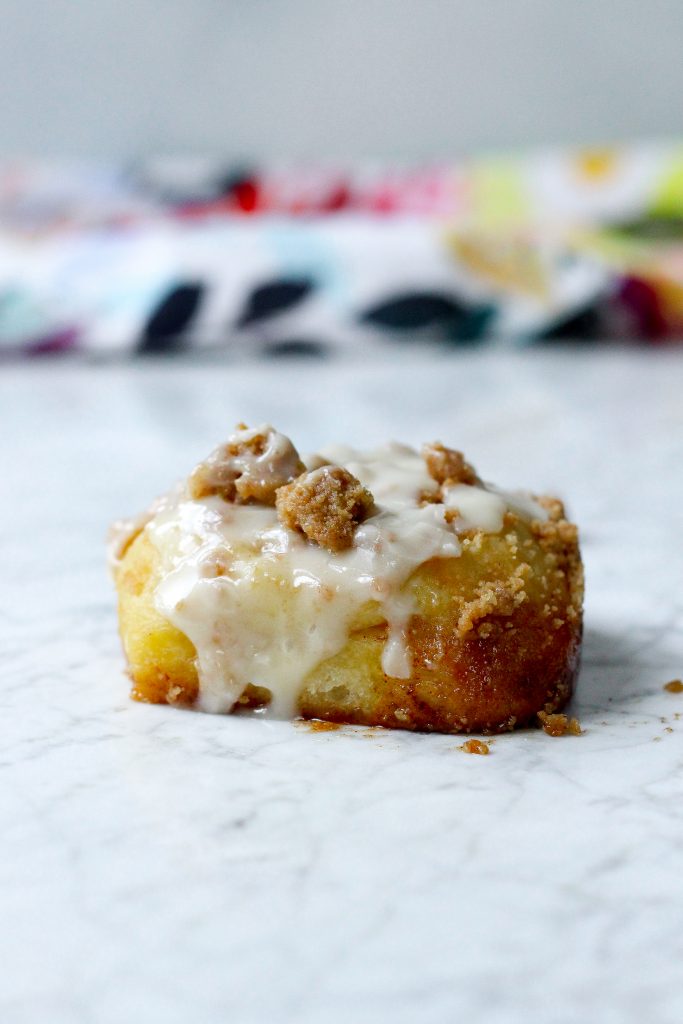 Now, if the idea of sprinkling buttery, cinnamony streusel on top of cinnamon rolls freaks you out, (1) we may not be able to stay friends (I kid, I kid), and (2) feel free to leave it out of the equation. The cinnamon rolls and cream cheese icing DEFINITELY can stand on their own and will still be ridiculously delicious. I do urge you, however, to take a leap of faith here and try the streusel out. It adds so much to these! 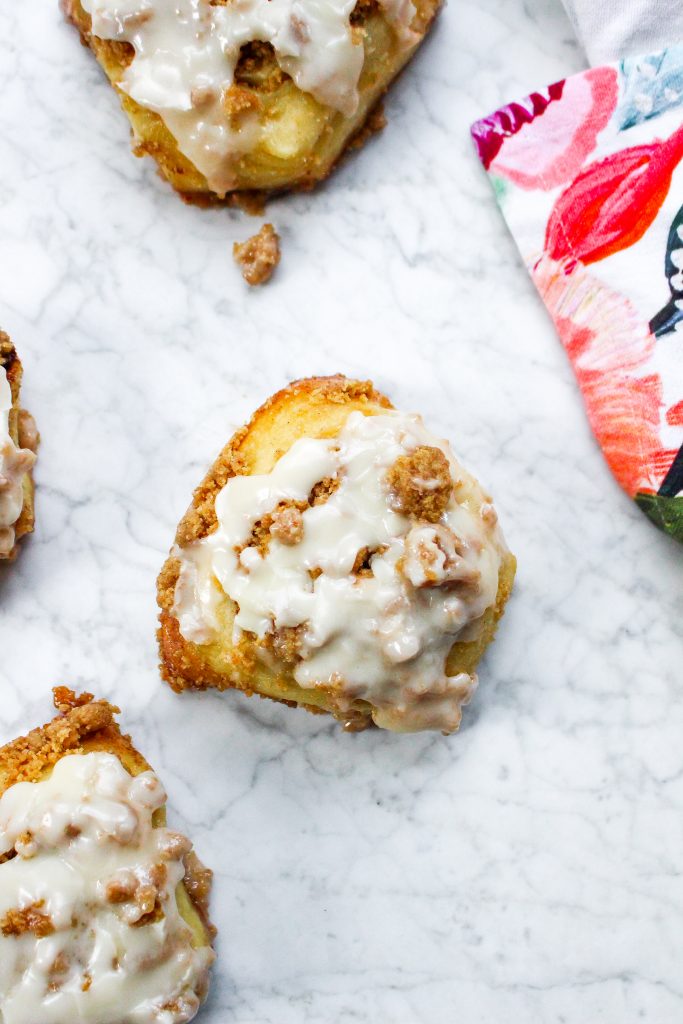 Not only is the streusel incredibly easy to make (it all happens on the stovetop), but it adds another irresistible layer of buttery, sweet goodness on top of these already amazing cinnamon rolls. AND! It really makes these taste coffee cake-esque! It adds that fun, crumbly texture, which I adore. 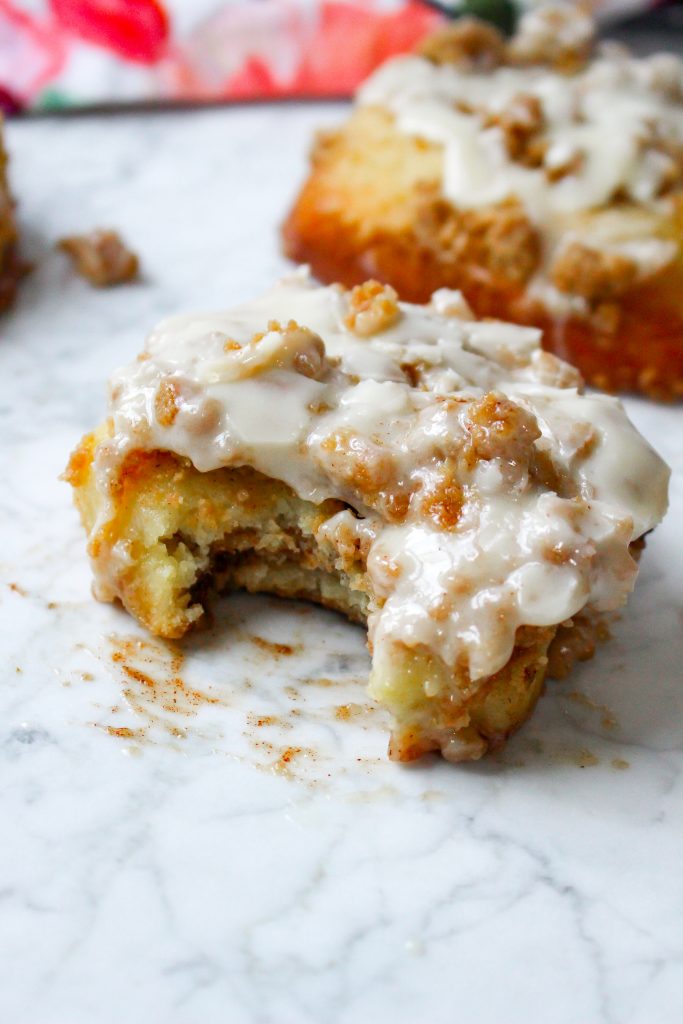 So, c’mon! Lose your damn mind alongside me. You will NOT regret it.