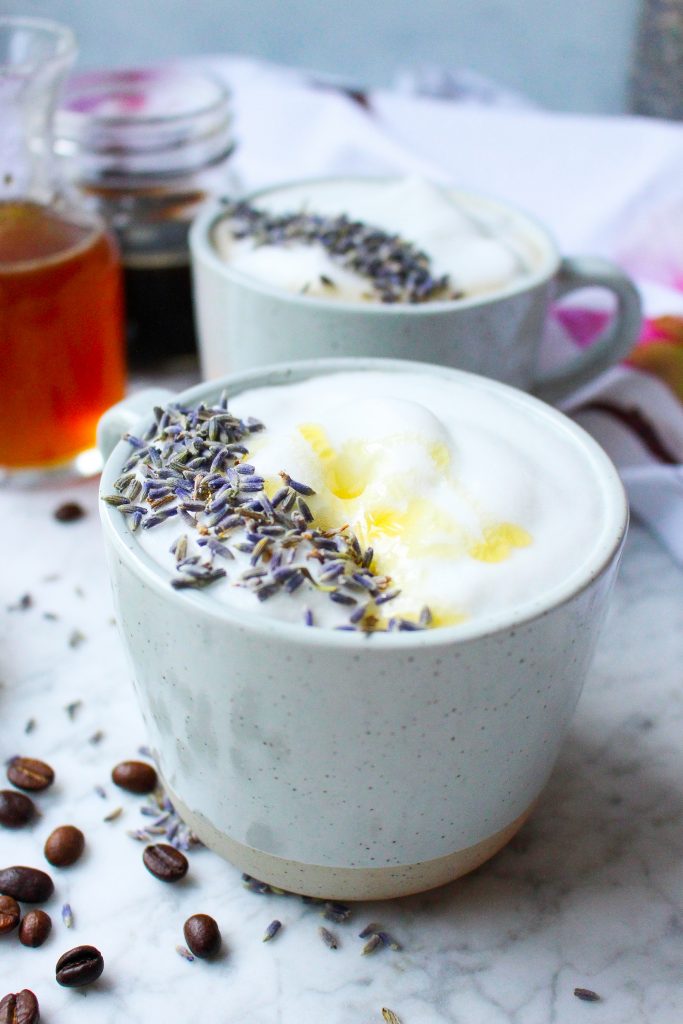 Don’t worry. I’ve got you covered. I’m going to ease you into the weekend with the most comforting cup of caffeination out there. 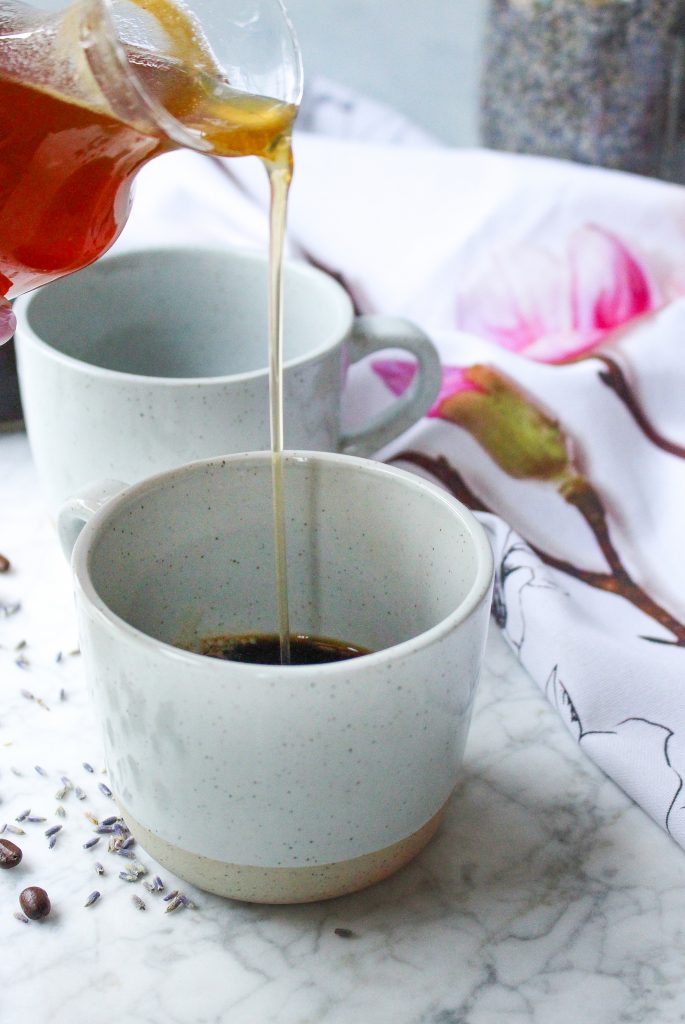 Today, we’re making lattes. But not just any lattes. Lattes with homemade honey-lavender syrup. AKA, my newest favorite thing.

Over the summer, my sisters and I took my mom away to Cape May for the weekend to celebrate her birthday. While there, we visited one of my most favorite places in the world: Congress Hall. It is a beautiful old hotel right on the waterfront, and it’s pretty much the stuff of dreams. They have a really cute coffee shop right off the lobby, and every time I’m in Cape May, I stop in there. It’s just so darn cute. 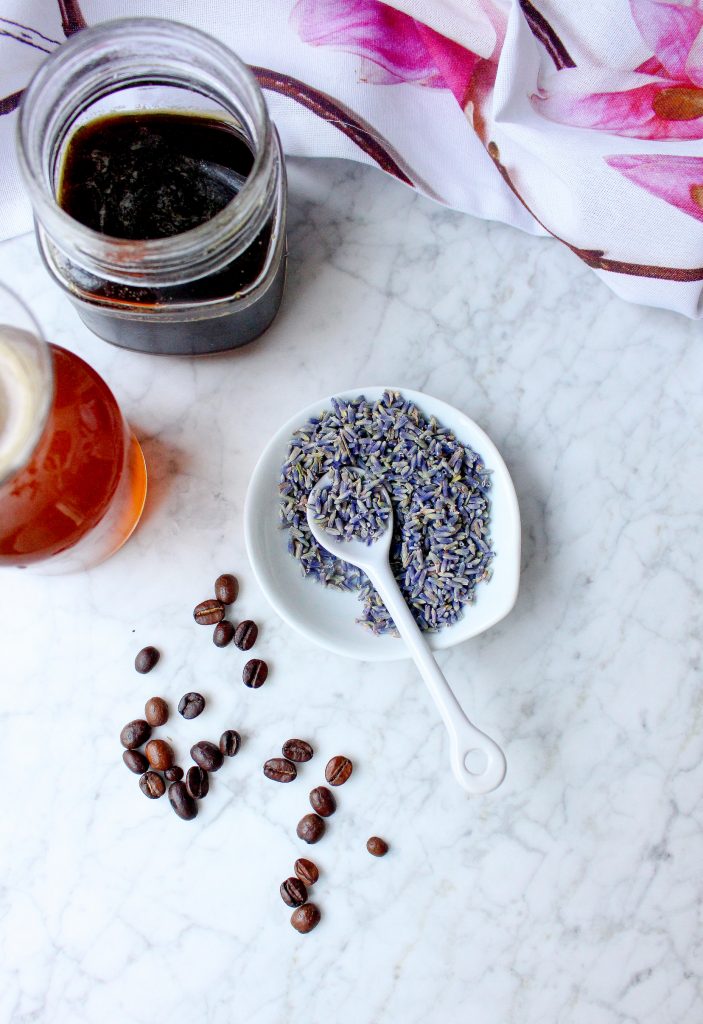 While perusing the menu, I noticed the coffee flavor list. Now, coffeehouse flavor syrups are NOT my thing. I don’t care for them usually, and I almost never get them as a result. In the long list of options, though, one stuck out to me. Honey lavender. It sounded too interesting to pass up. I admit, I was worried it would be like drinking a glass of coffee potpourri. I mean, I’ve always liked lavender in my candles and bubble bath, but not necessarily in my food. It can be very overpowering, and that’s exactly what I expected with this cup of coffee. 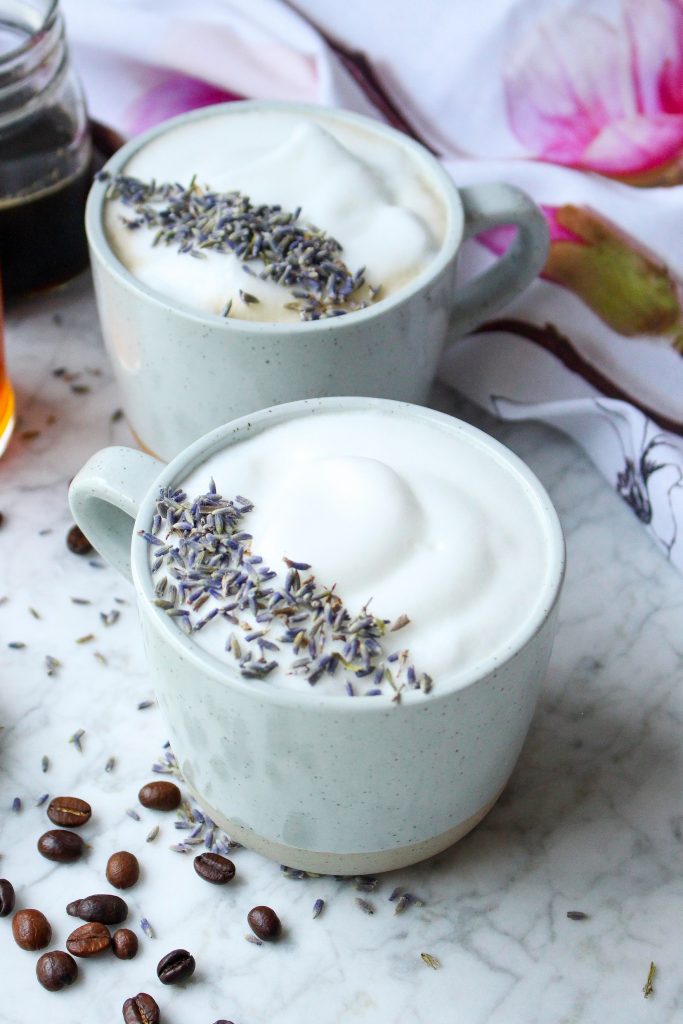 But! Curiousity got the best of me and I ordered it anyway.

And goodness am I glad I did! 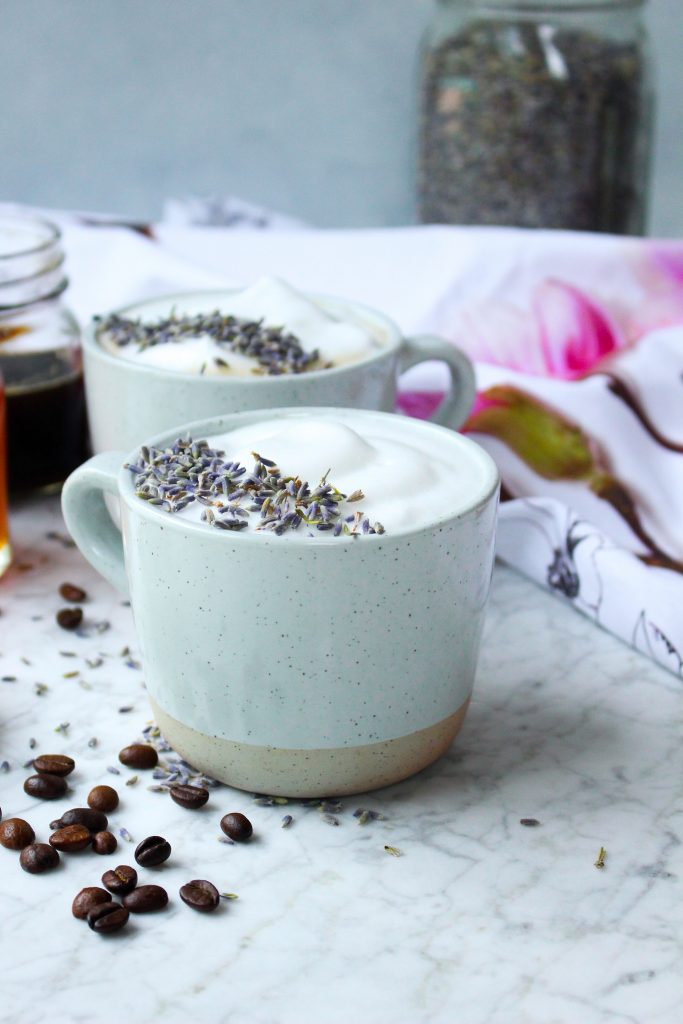 Not only was the lavender NOT overpowering or overly florally, it added such a comforting element to my coffee. Which is huge in my book. You see, coffee is so much more than a caffeine jolt to me. It’s a morning routine. A comfort. When I don’t have coffee in the morning, I am off for the entire day. Again, not necessarily because of the lack of caffeine. I just LOVE holding that hot mug of coffee early in the morning. I love the way that first swirl of milk or cream looks as you stir it in. I love the smell. I love the taste. 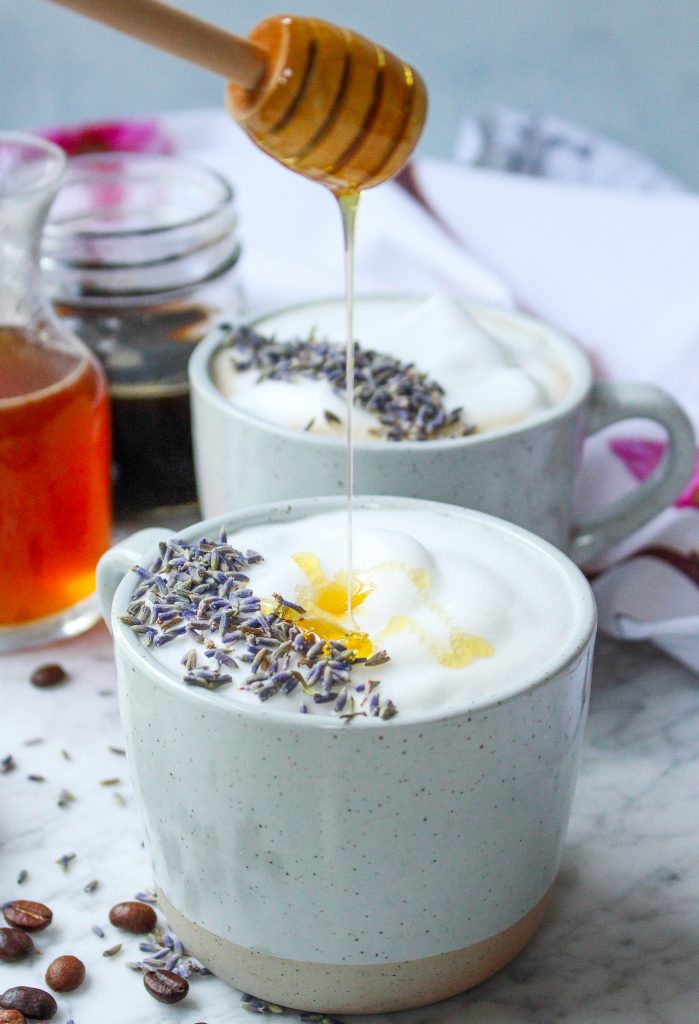 And the honey lavender syrup in this cup of coffee was everything. It was slightly sweet, a touch florally, and super comforting. All while meeting my morning routine requirements. I sipped it as we sat in huge adirondack chairs, basking in the early-day sunshine, overlooking the ocean.

I decided in that moment that honey lavender coffee was going to be a thing. A regular thing. At home. 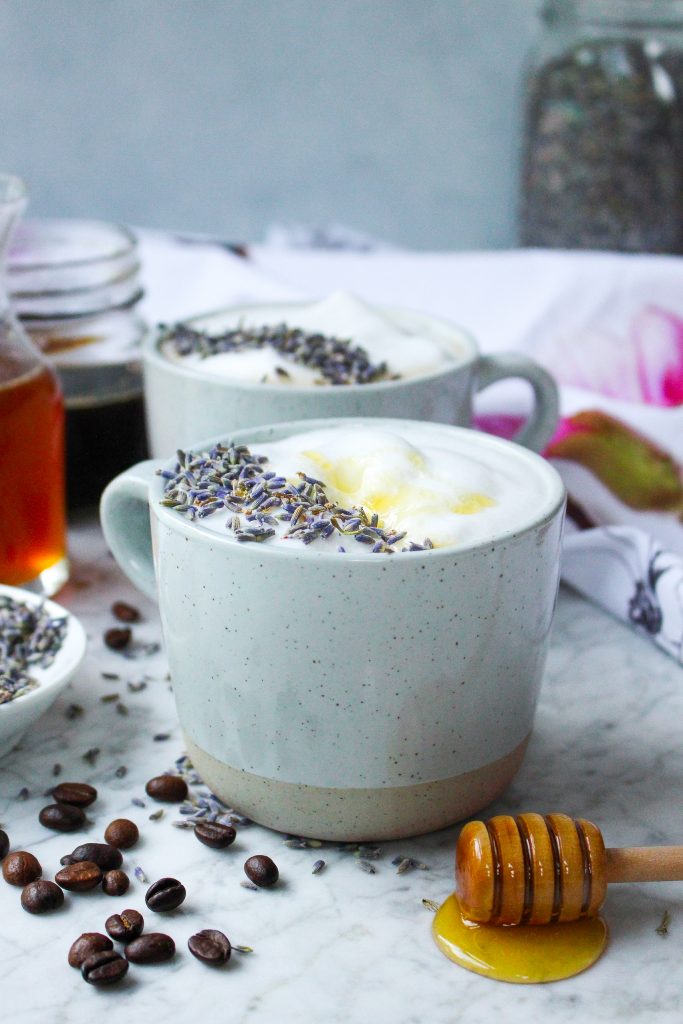 And so here we are!

These lattes are really easy to make, but if you don’t have an espresso maker, I can vouch for this syrup tasting good in all kinds of coffee. I’ve had it in regular coffee (my first experience), and I’ve actually had it drizzled into a big glass of cold brew. It really works in any and all coffee drinks.

It starts by making the syrup, which I recommend doing ahead so that the lavender flowers have plenty of time to steep in the syrup before you use it. It’s a mixture of water, sugar, honey, and dried lavender. That’s it! You simmer it until the sugar and honey are completely dissolved and then let it cool to room temperature, with the lavender flowers steeping. Then, when you’re ready to use it, you strain out the flowers and go to town! 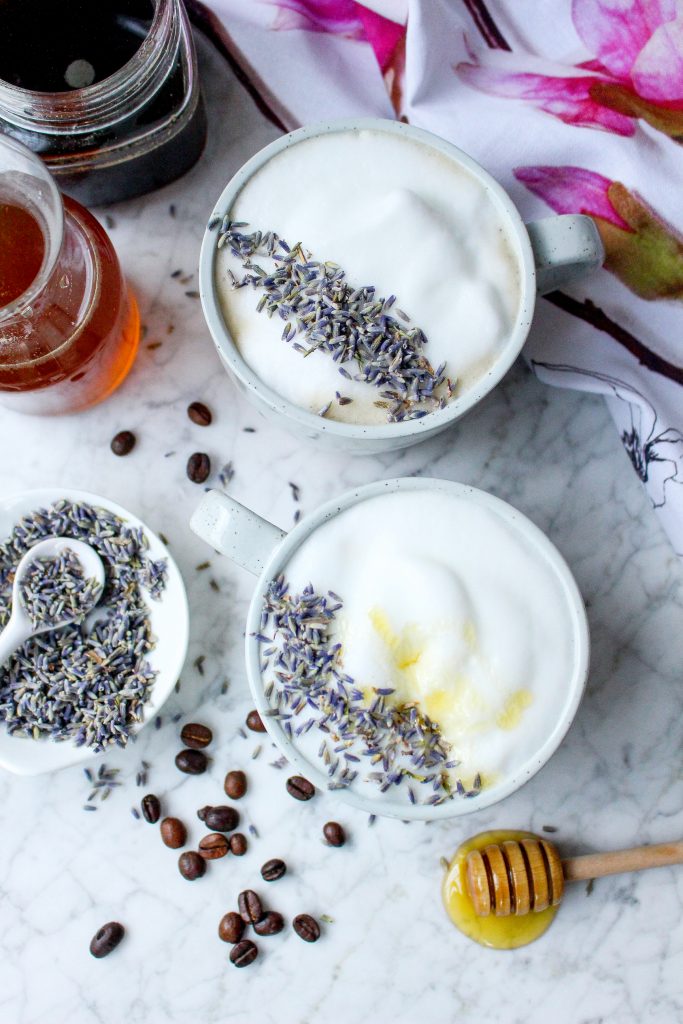 The other great thing? The syrup keeps in the fridge for up to two weeks! I have a small carafe in my fridge right now, and I’ve been enjoying it in my coffee every morning for the past week. And it’s been LOVELY with the cooler almost-fall mornings.

I’m telling you, these lattes are comfort in a cup. And they are destined for your weekend plans! 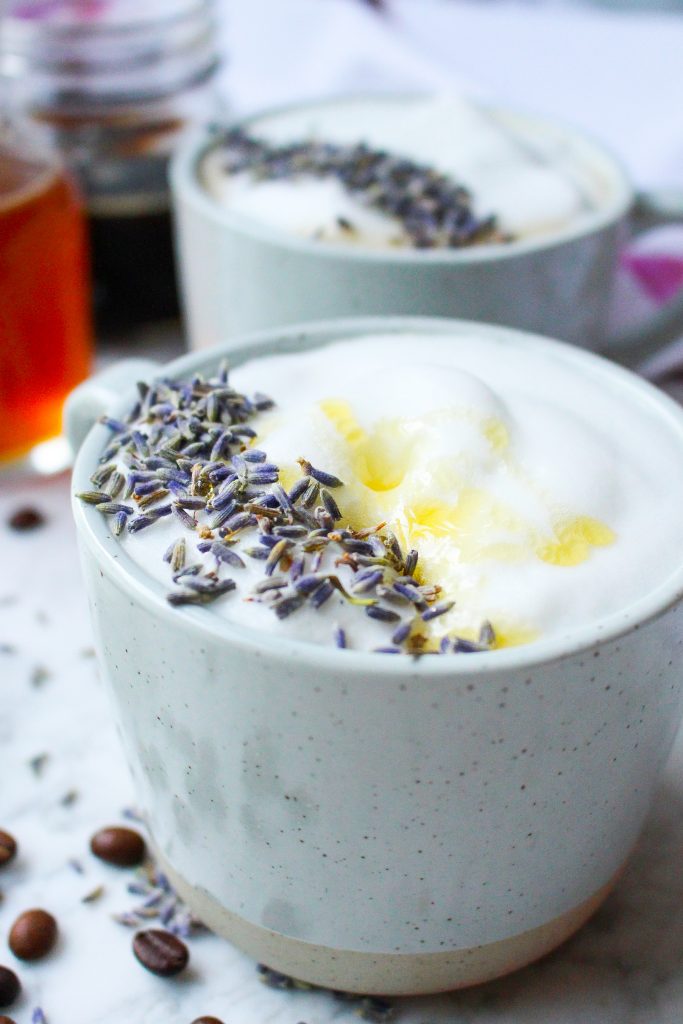 You can thank me later!