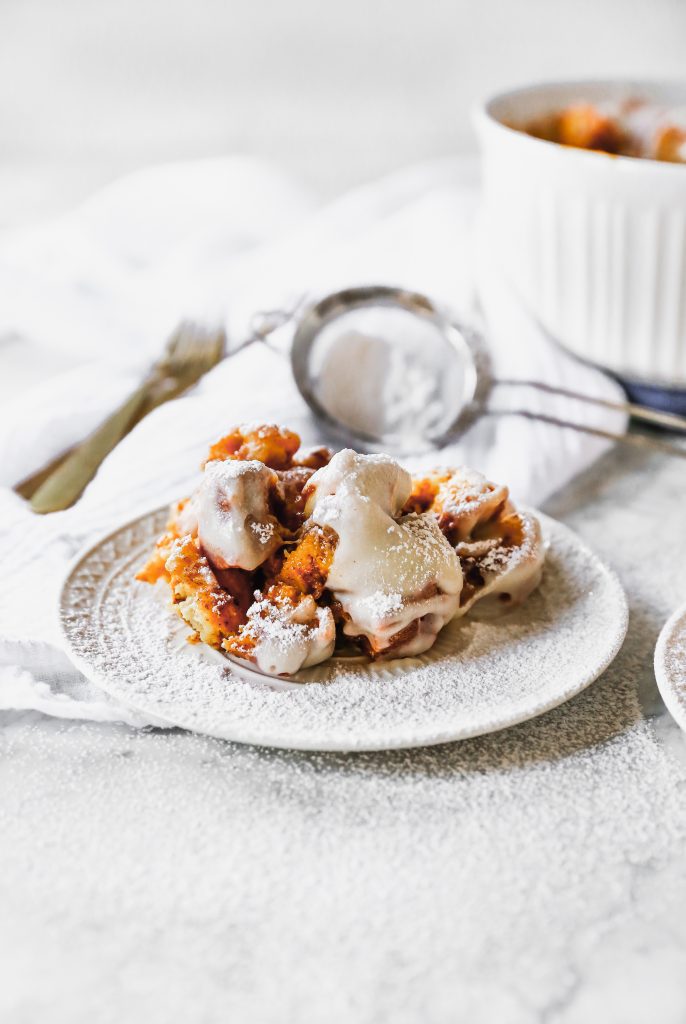 Today’s recipe is all about perseverance. 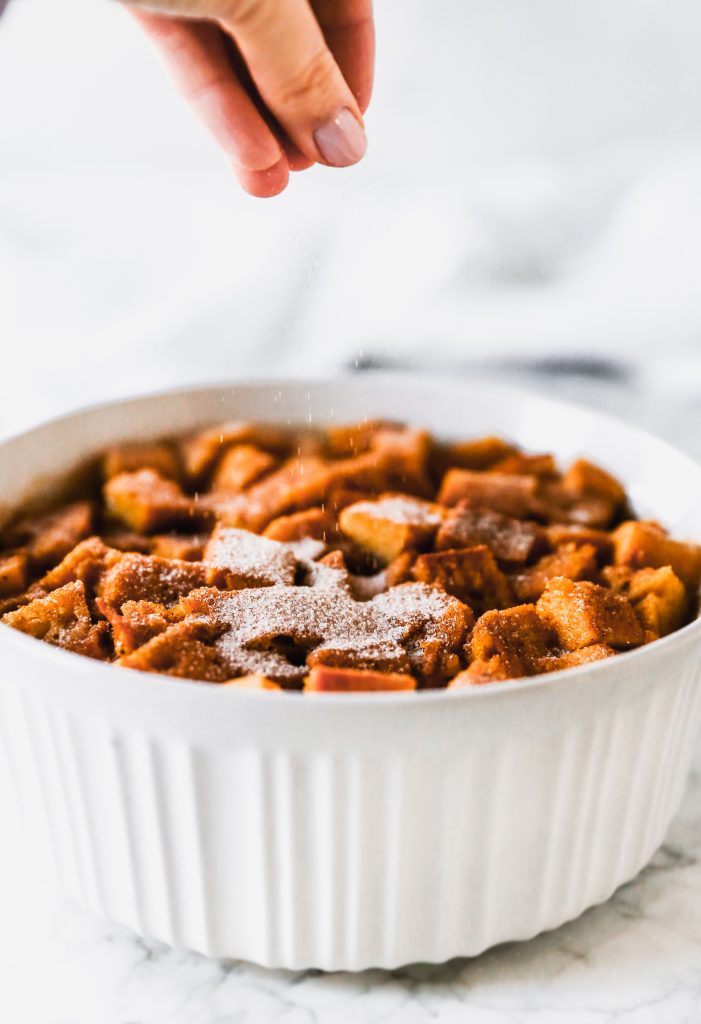 I have been working on this recipe for ohhhhh about two months now? Yeah. I’m a crazy pants. Good for you guys, not so good for me.

I wanted to share this recipe with you back in October/November when pumpkin was all the rage (which kind of annoys me, really. But I still wanted to jump on the bandwagon! Typical millennial over here.), and I was pissed that I couldn’t get the recipe juuuust right in time to do that. Now, however, after two failed recipe attempts and a third raging success, hindsight is definitely 20/20. I’m so glad that I took the time to get this one right before sharing it with you all. And besides! Pumpkin is totally appropriate for the December holidays, right? Right. 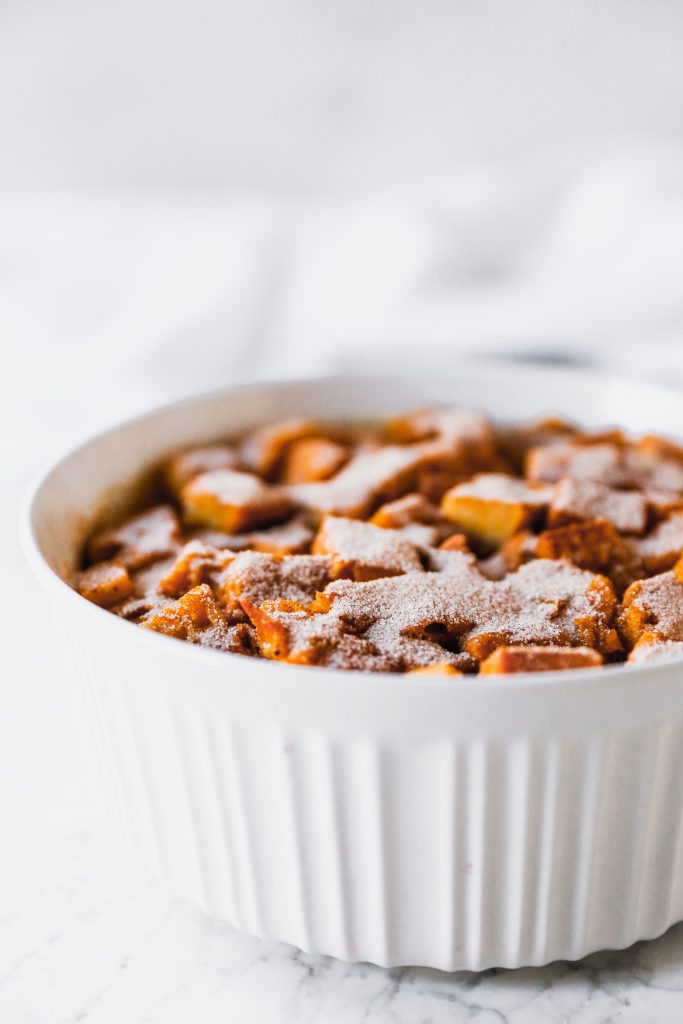 So, if you google “pumpkin French toast casserole,” you’ll get a bajillion hits on similar recipes to this one. I’m not giving you something today that will totally cause that “mind blown” effect, but I WILL say that I am pretty damn proud of this recipe. And the effort of getting it right makes it pretty damn special in my book. 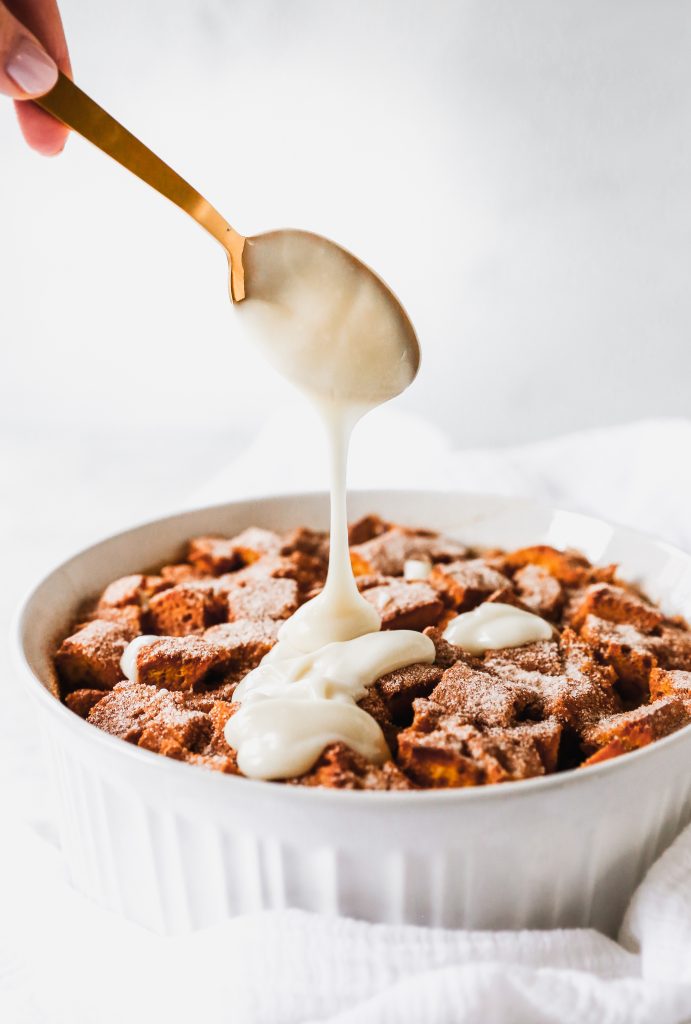 This French toast casserole is much like an egg strata. Except sweet. And flavored with pumpkin! And maple syrup! And cinnamon sugar! Ya know, all the best things in life. You whisk up an easy egg and pumpkin custard, pour it over cubed bread in a baking dish, and let it sit in the fridge for several hours (overnight is ideal) so the bread can absorb that sinfully yummy custard. 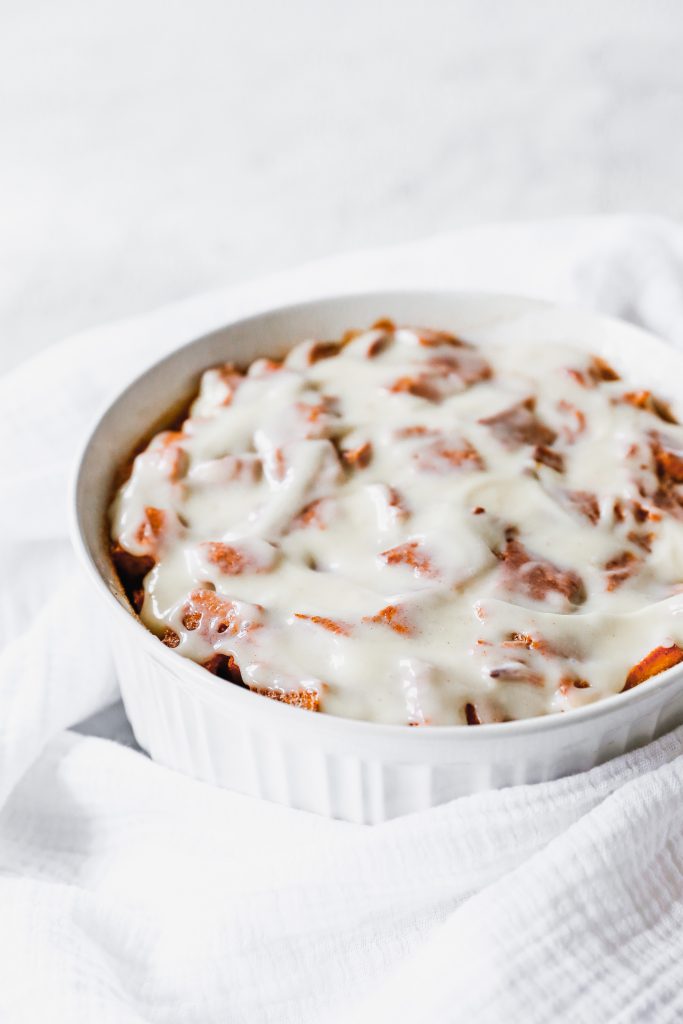 Then! You sprinkle the top with an obnoxious amount of cinnamon sugar (because the crunch effect it gives is to die for), and you pop it in the oven! When it bakes, the most amazing textural changes happen. The bread gets soft and gooey and crispy in spots all at once, and the custard gets fluffy and creamy and lovely. The cinnamon sugar hardens to a crystallized state, blanketing the entire dish with the most irresistible crispity crunch. 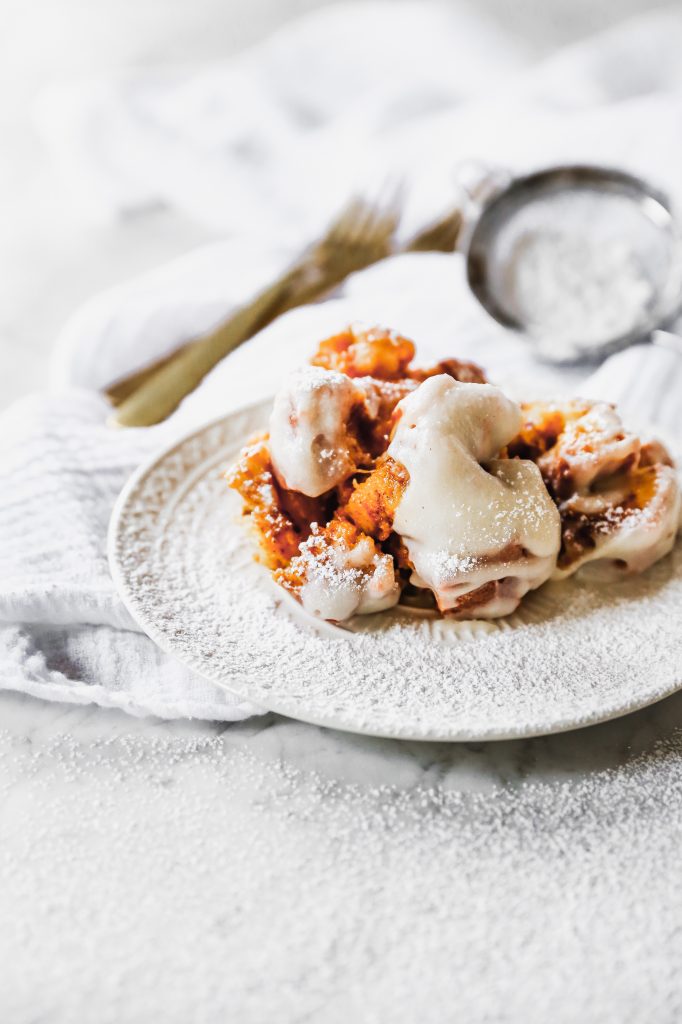 As if things weren’t glorious enough!

Copious drizzles (that sounds sort of like an oxymoron, doesn’t it?) of cream cheese frosting go over top. It creates this cinnamon roll effect. Warm, ooey, gooey, and pumpkin spiced! This one is a winner for sure. 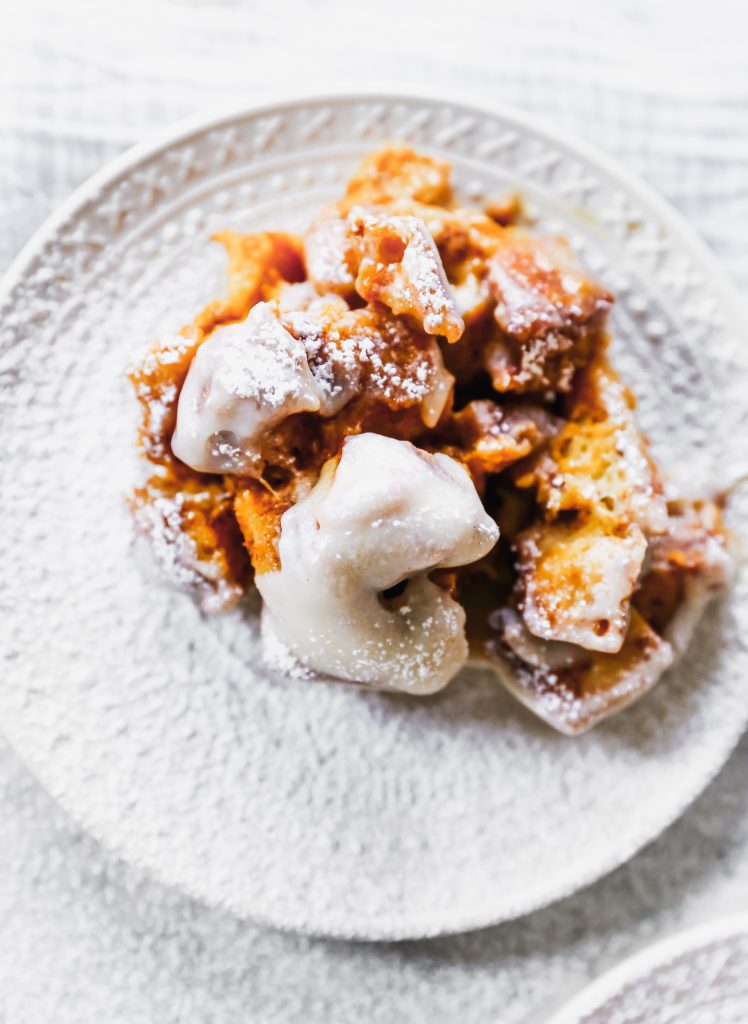 Now, you could definitely serve this up with more maple syrup, but I love me some cream cheese. In fact, most mornings I crave a toasted bagel with cream cheese. Thank the heavens I rarely give into this craving (hello, green smoothies and yogurt parfaits!), but my love of cream cheese is seriously something fierce. So, for me, the cream cheese drizzle here is necessary. But by all means, swap it out for whatever French toast topping you prefer! Syrup! Whipped cream! Powdered sugar! Give it all a go. 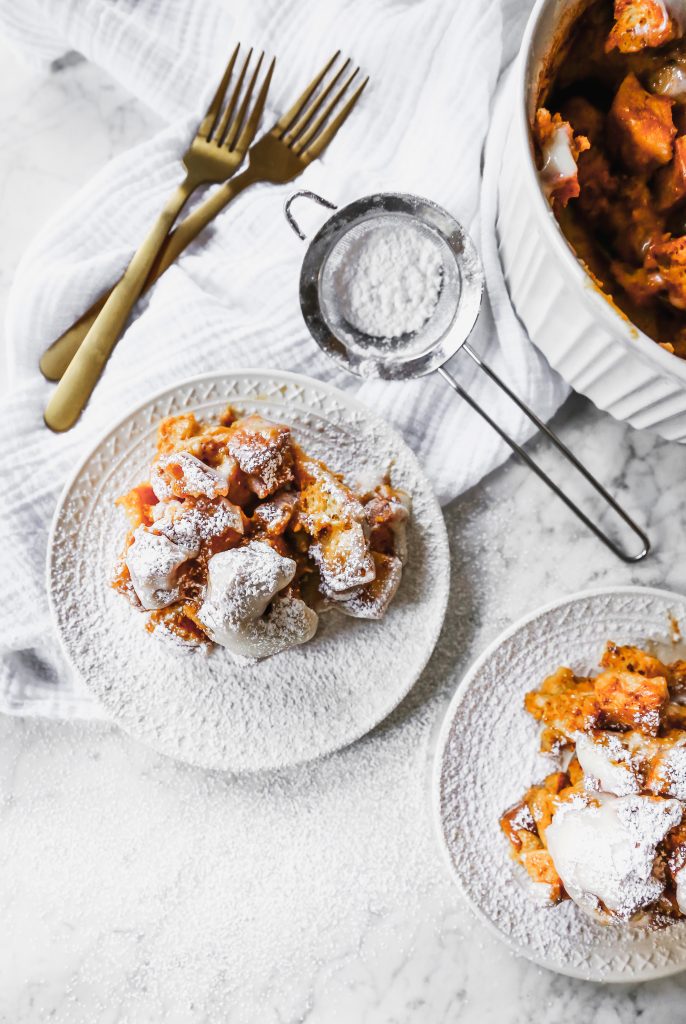 It’s the holidays, after all.

Speaking of, this French toast casserole is a stunner and makes A TON. If you’re having guests over on Christmas morning and need something you can make ahead (like the night before), this one’s for you. Not only is it easy but impressive, it is the perfect sweet component to a breakfast or brunch spread. 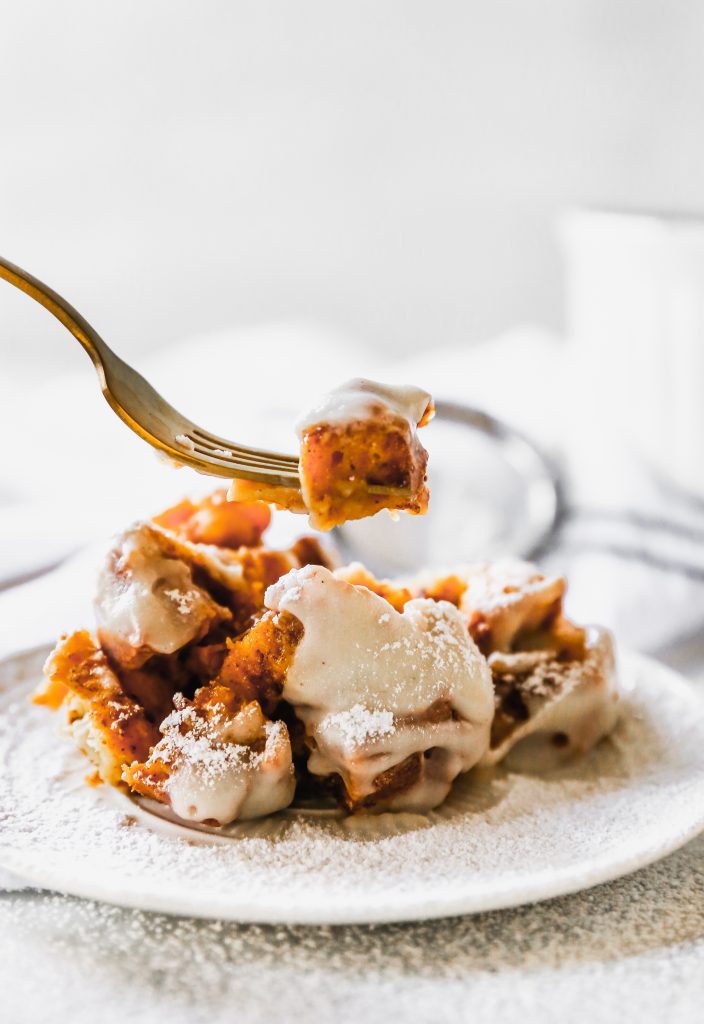 Plus, everyone still loses their minds over anything pumpkin these days, and I think serving something like this in December will achieve the same effect.

I know that I, for one, wouldn’t turn my nose up at this in December. Or March. Or July. 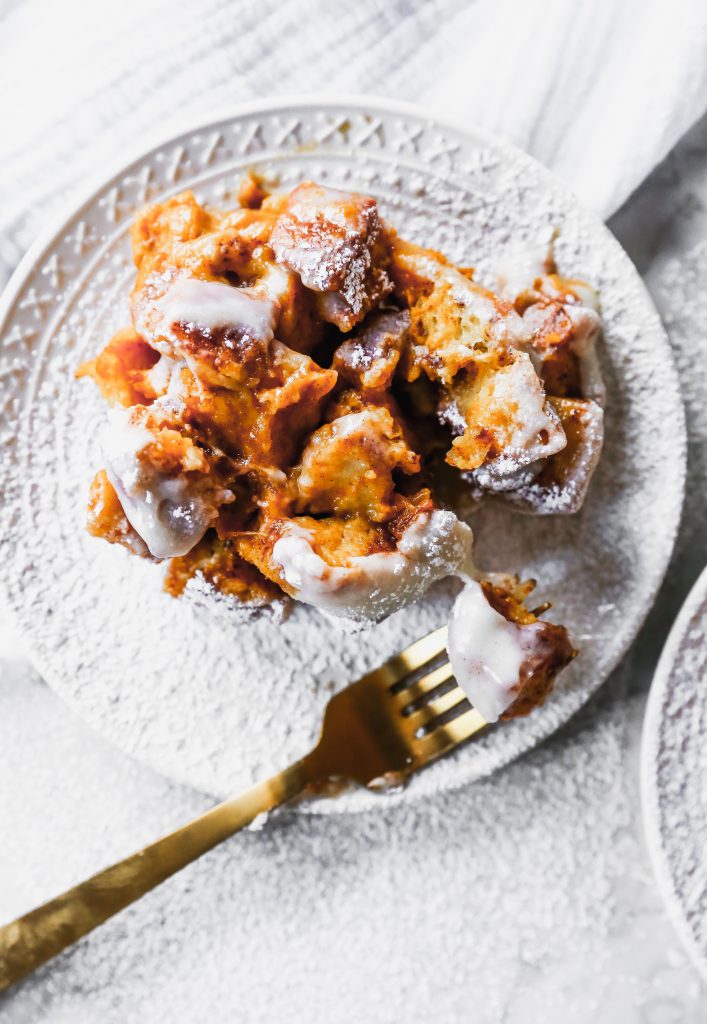