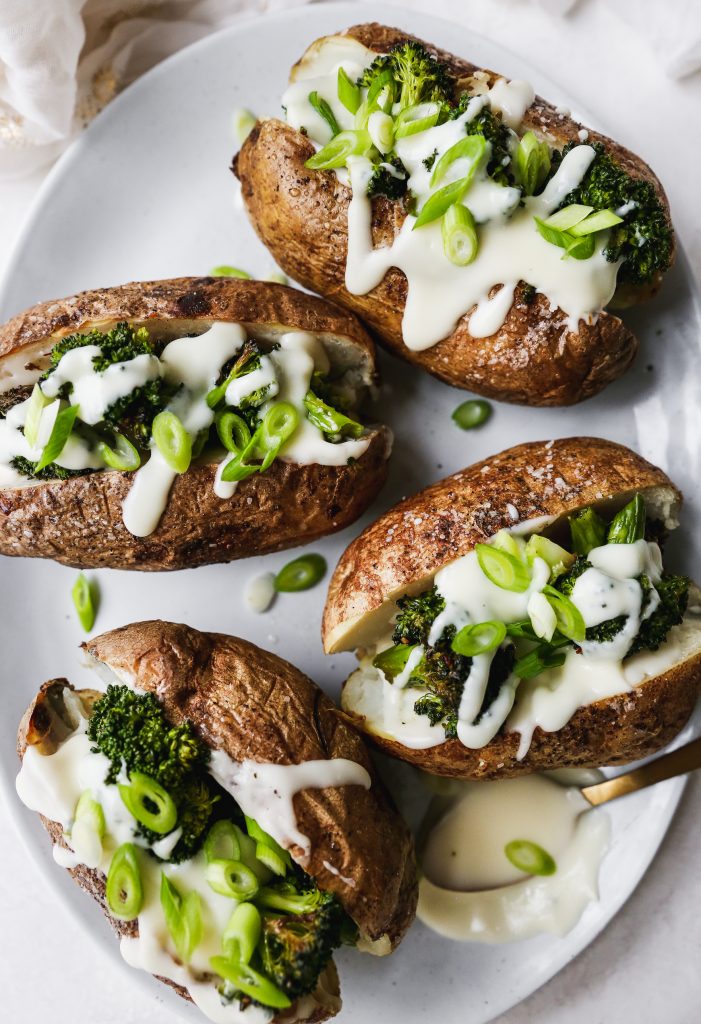 This year is off to a sluggish start so far. I think we should all make a deal that the new year can never start on a TUESDAY again. It totally threw things off last week.

I originally planned to share this recipe with you last week, but….it just never happened. I was moving in SLOW MOTION all week long, and today is actually the first day that feels like a fresh start. For me, today is the unofficial start of the new year. Because all things should start on a Monday, am I right? 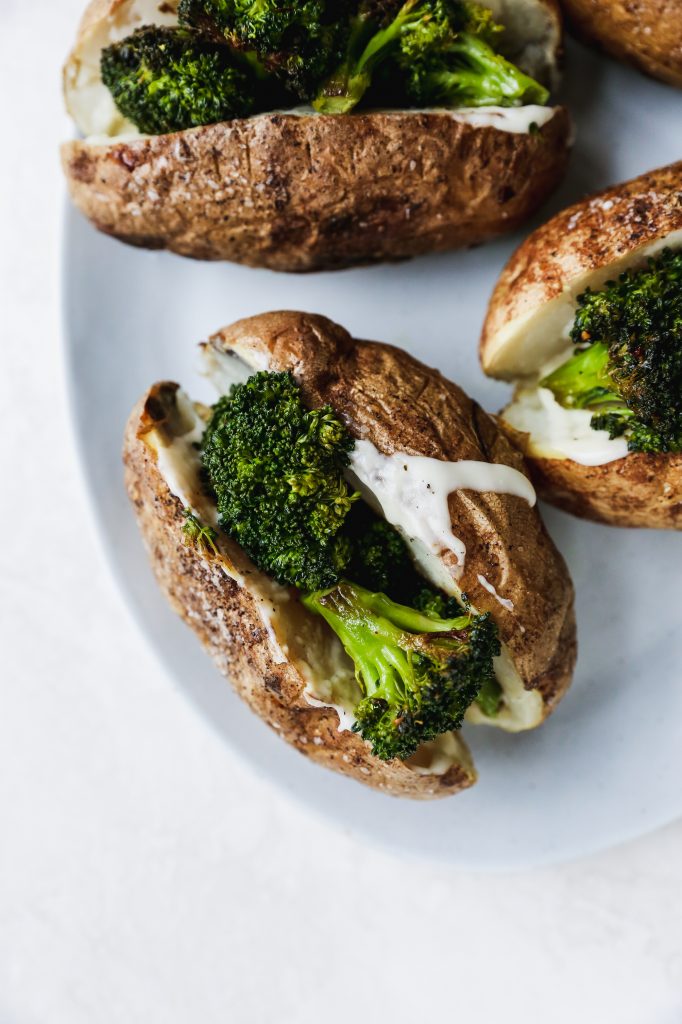 I have talked at length about this in the past, but I don’t make formal eating resolutions at the start of a new year. I find that it puts way too much pressure on me (in a bad way) and I usually end up crashing and burning if I restrict myself too much in terms of food. For instance, if you tell me that I have to give up a certain food, like cheese…all I want is cheese. And while many people claim that such cravings go away over time, I have never found this to be true. At least not for me! My brain is like “CHEESE, CHEESE, CHEESE. MUST GET CHEESE.” 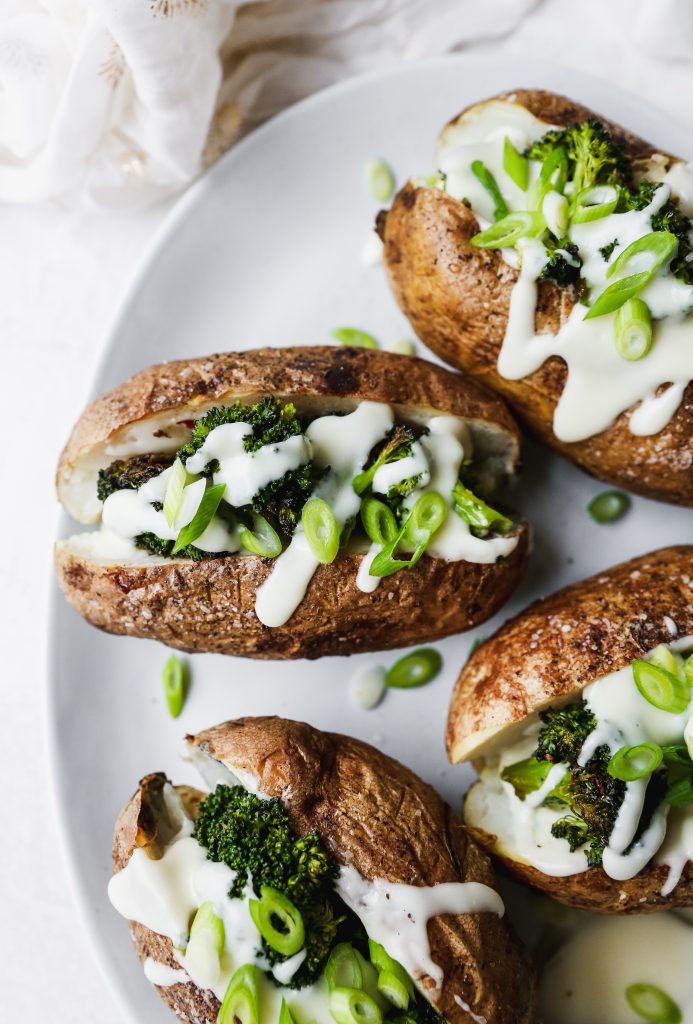 So. I approach the new year with some general goals in mind but without any sort of “new year, new me” kind of mantra. I eat mindfully but without restriction (which is how I tend to eat year round anyway). And that is how I make real, long-lasting changes in my life. In moderation! Everything in balance! 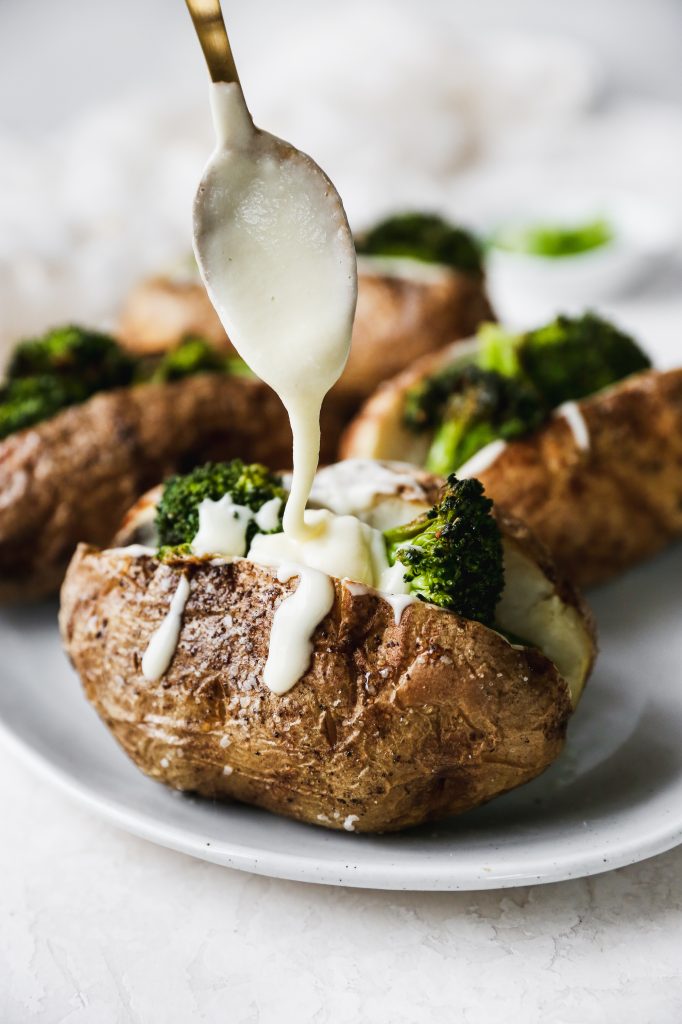 These loaded baked potatoes are the perfect example of what I’m talking about. My ideal loaded potato would be chock full of bacon, cheese, butter, sour cream, and a sprinkling of chives or scallions. This version is a slightly lighter take on that but with some indulgence kept in! It’s the best of both worlds, and as long as you aren’t doing a no-dairy/Whole 30 kind of thing this month, this will probably still work with your dieting plans. 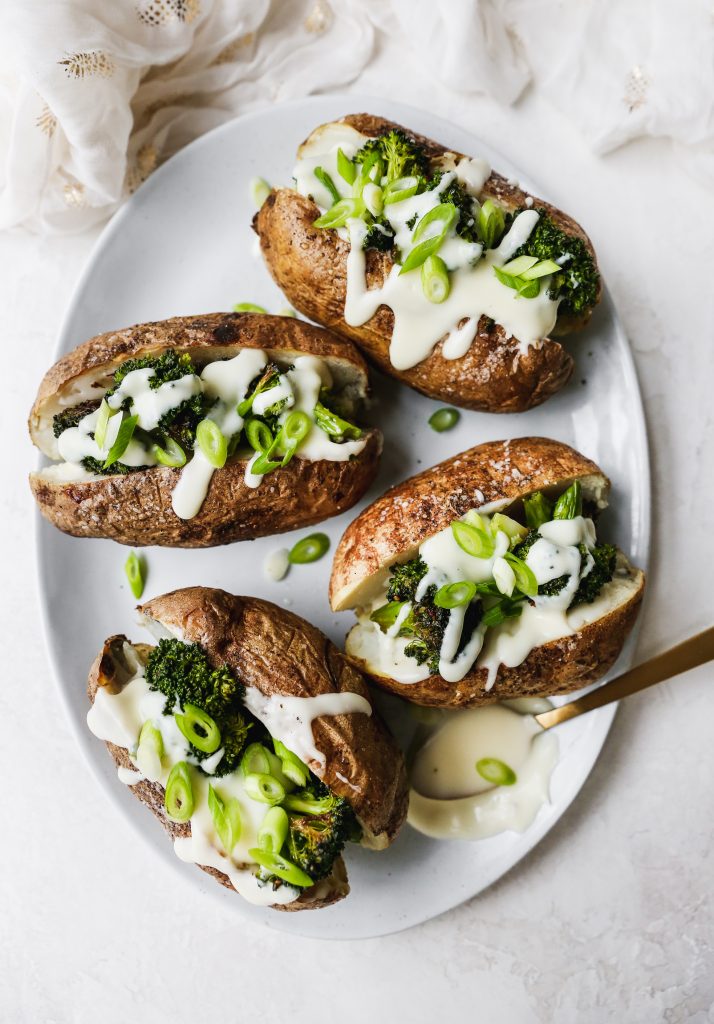 Potatoes get such a bad rap. Or at least, they have in the past. People are coming back around.

They are a GOOD carb, and unless you are deep frying them or overloading them with butter and cream, they can stay good for you when all is said and done. They’re loaded with fiber, iron, potassium, and tons of other important nutrients. They’re one of the most versatile foods out there, as well. I was raised on potatoes in all forms, and as a good Irish girl does, I have carried this forward with my own cooking. Potatoes are a very common occurrence in our house. 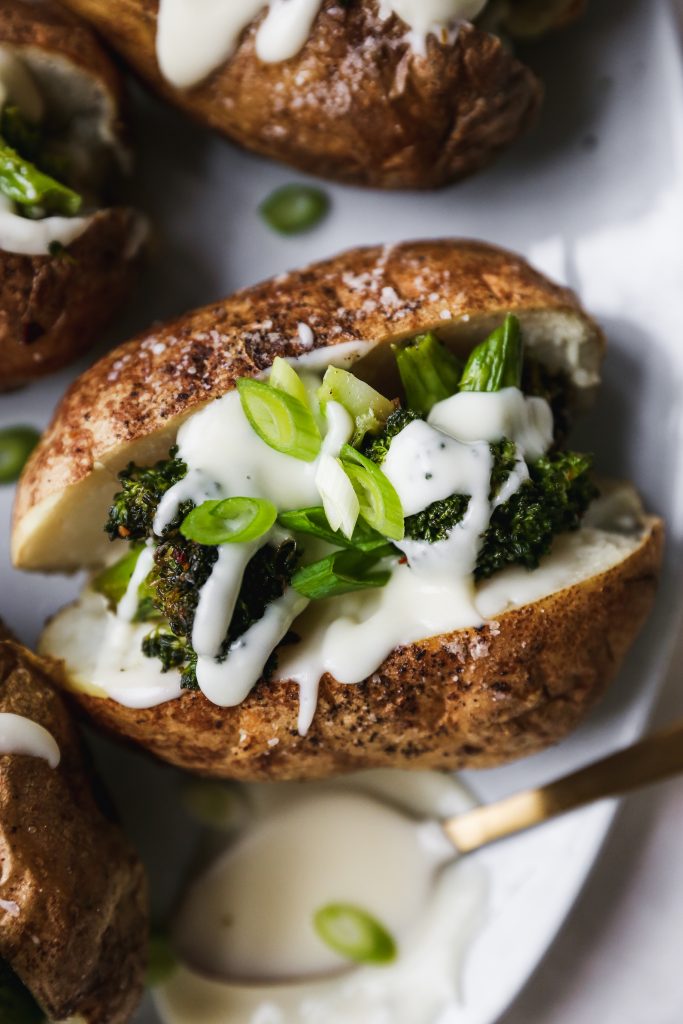 I bake these potatoes just like I always do: rubbed with olive oil and a generous coating of salt and pepper on the skins. Once they’re tender, I fluff ’em up a bit, stuff them with roasted broccoli florets, and top everything off with a glorious drizzle (or pour) of a quick and easy oniony cheese sauce. Oh, and scallions! Can’t forget the scallions. They MAKE loaded baked potatoes. Of all kinds. 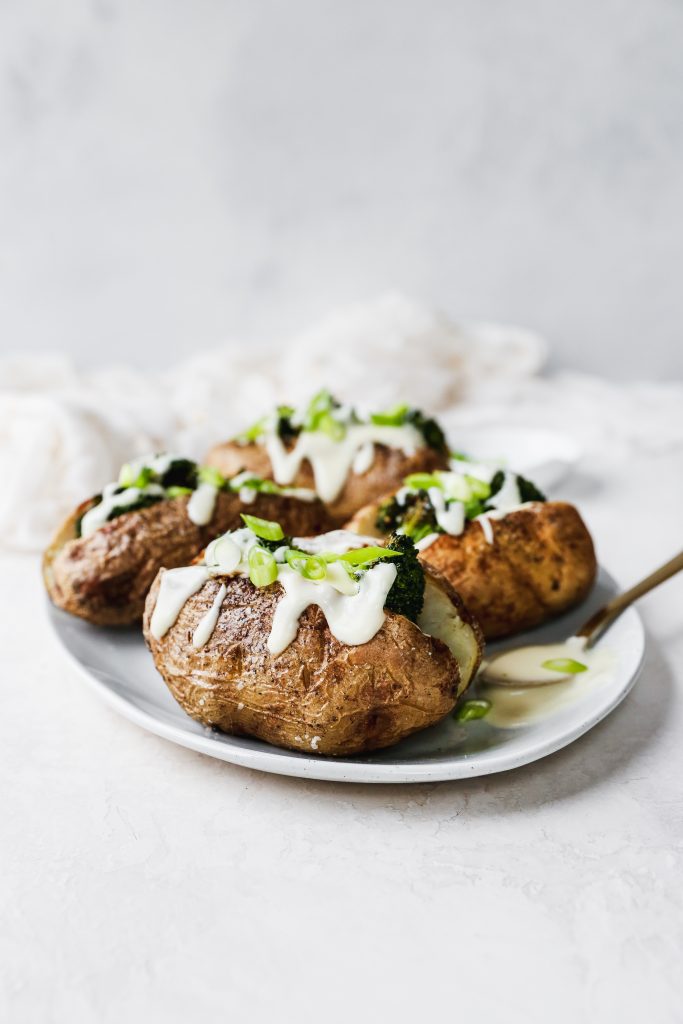 These are more than enough for me as a main course. I miiiight serve them alongside a light side salad, but really, these are hearty and filling and can totally stand up on their own as a vegetarian meal.

Dan and I ate them for dinner a couple times last week, and we were both in agreement that they are completely satisfying on their own. That said, next time you’re treating yourself to a steak dinner at home, I suggest you try these on the side. I won’t judge. 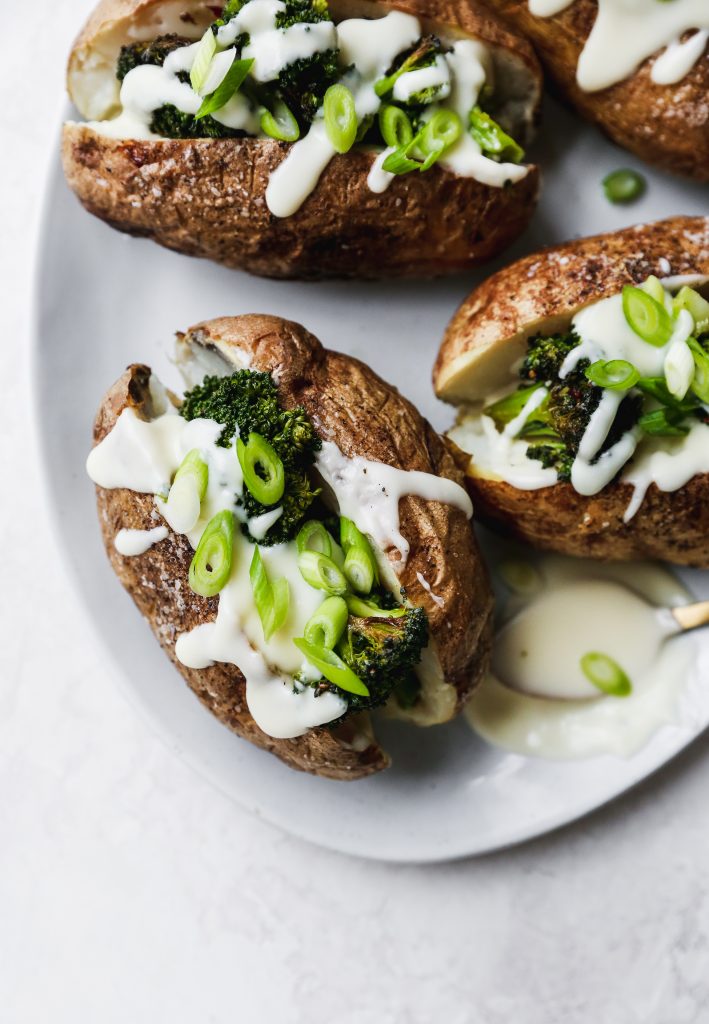 The resulting potato is hearty and comforting but still health forward. It’s a meal that I actually look forward to eating, unlike so many other healthified January dishes that are taking the world by storm right now.

The cheese sauce is the main indulgence, and you can use as little or as much as you want here. It’s so creamy and flavorful, that a little bit really does go a long way. Not that I know anything about that…because my cheese sauce was a-flowin’!

This is my kind of new year’s diet, for sure.

For the Roasted Broccoli: 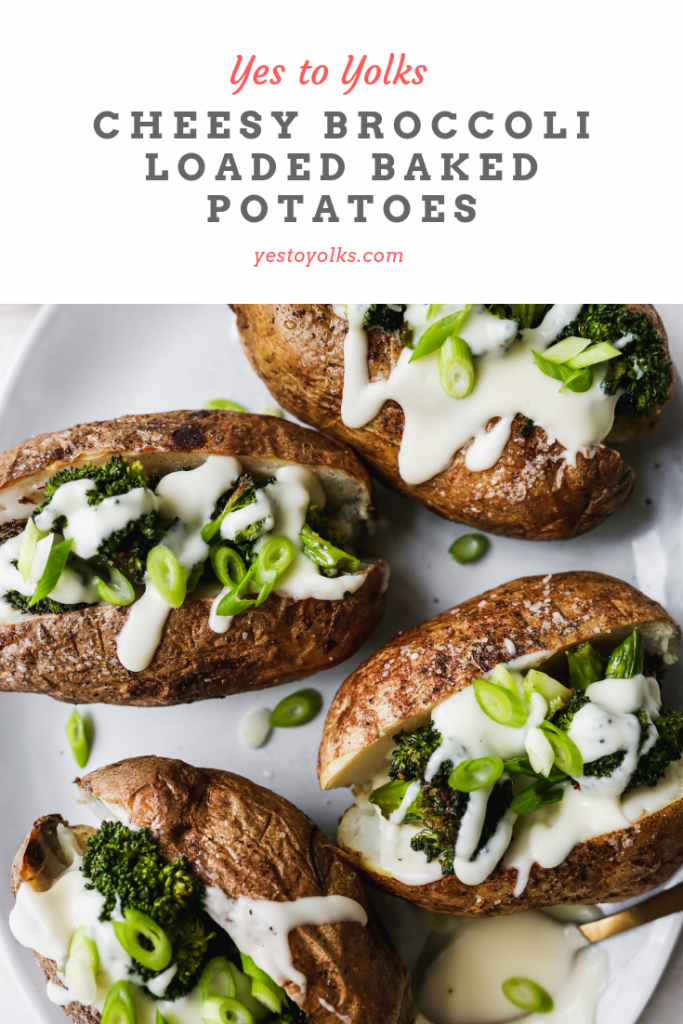