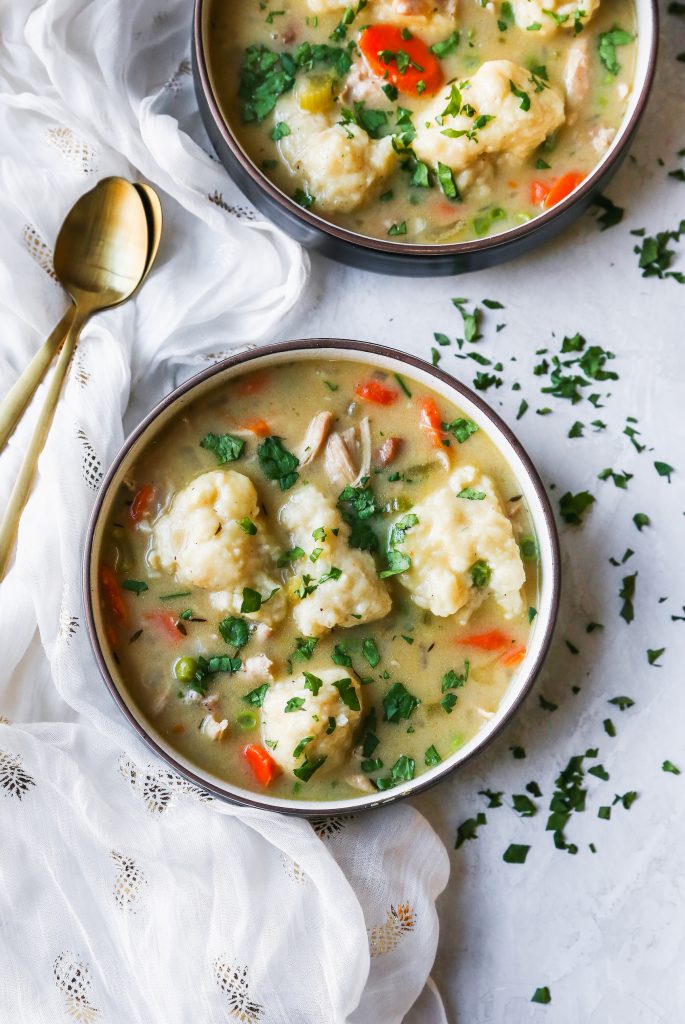 With the polar vortex arriving later this week, we’re going into lockdown mode, and I don’t mind one bit.

This time of year is tough. I stand by my declaration that January is the most depressing month of the year, but I DO love the cozy vibes it carries forward from the holidays. It’s literally the only thing I like about this time of year. We eat a lot of soups, stews, and hearty dishes as a way to cope, but also because the weather dictates it! 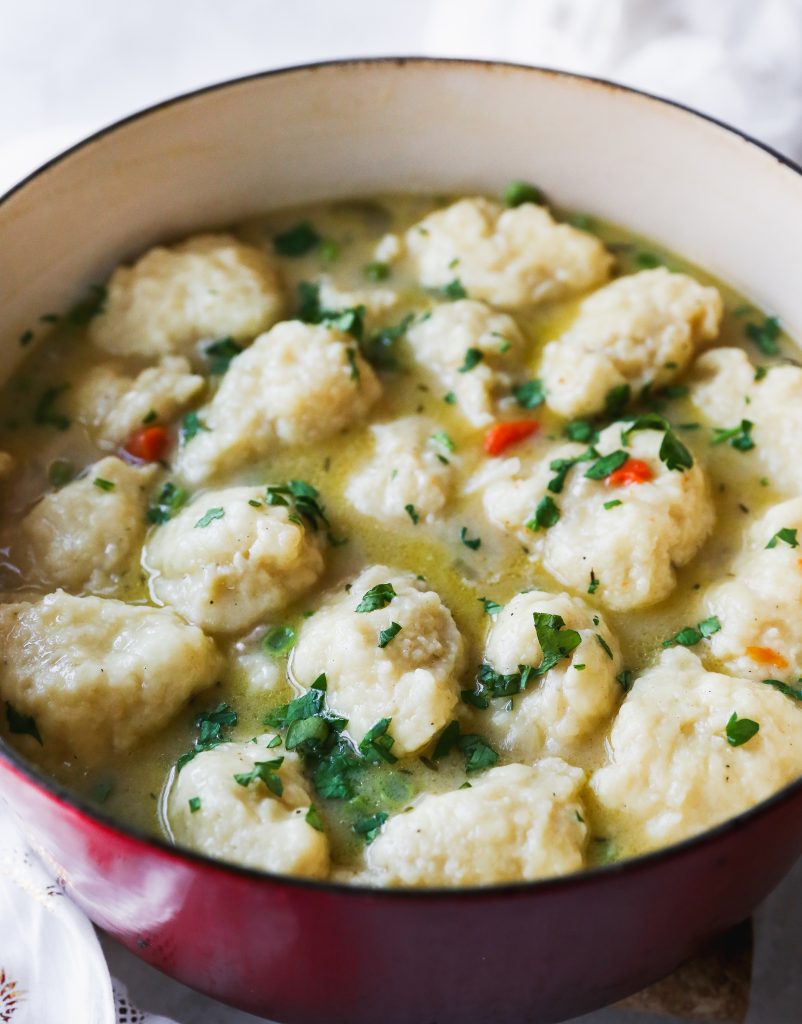 And these chicken and dumplings are no exception.

These are in our regular rotation and have been for a few years now. My friend Jessica shared a version of this a few years back, and I think I went to the store immediately and bought all the ingredients to make it that same night. It just looked and sounded SO cozy. My cold, dead January self needed it. 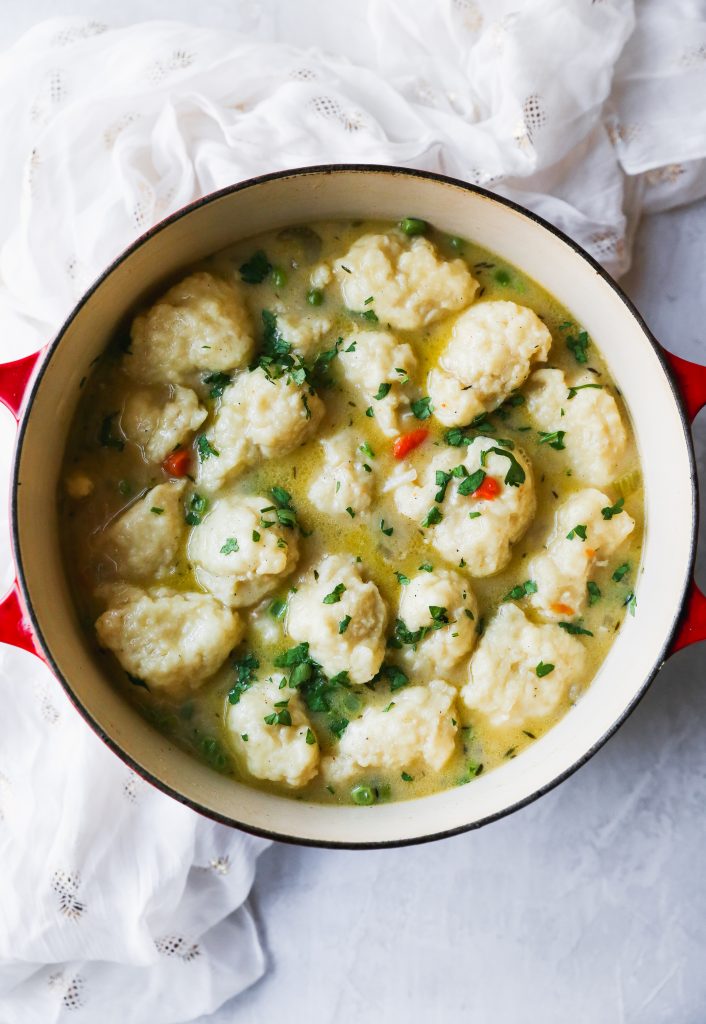 It was the dish that made us fall madly in love with chicken and dumplings.

Neither Dan nor I had grown up eating chicken and dumplings. It always sounded good, but it wasn’t something I felt compelled to make. Know what I mean? I think we all have dishes like that. It was always something that I knew I would like but had zero desire to make. UNTIL Jess shared that recipe! 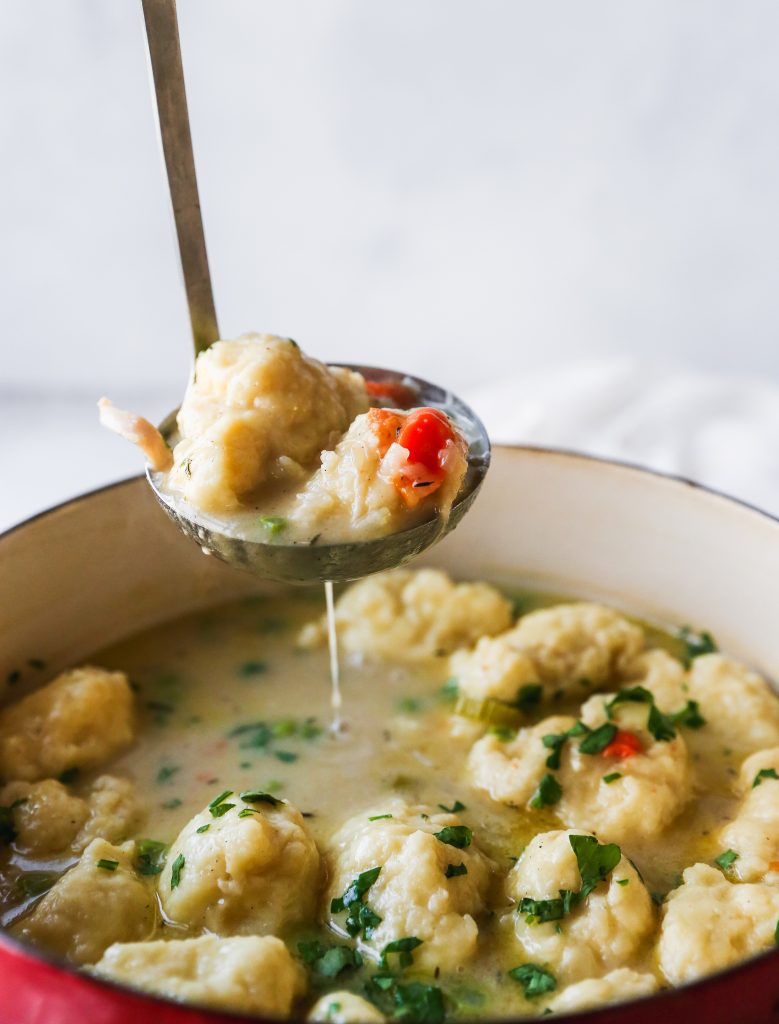 As I’ve said, I make this multiple times a winter and it is a regular staple in the dinner rotation. Every time I make it, Dan and I marvel at how good it is, like we forgot since the last time we ate it. It’s a fun discovery all over again. Over the years, I’ve tweaked and adjusted the recipe, and I can now confidently share it with you and declare it to be our favorite version. It is the bomb (people don’t still say that, do they?). 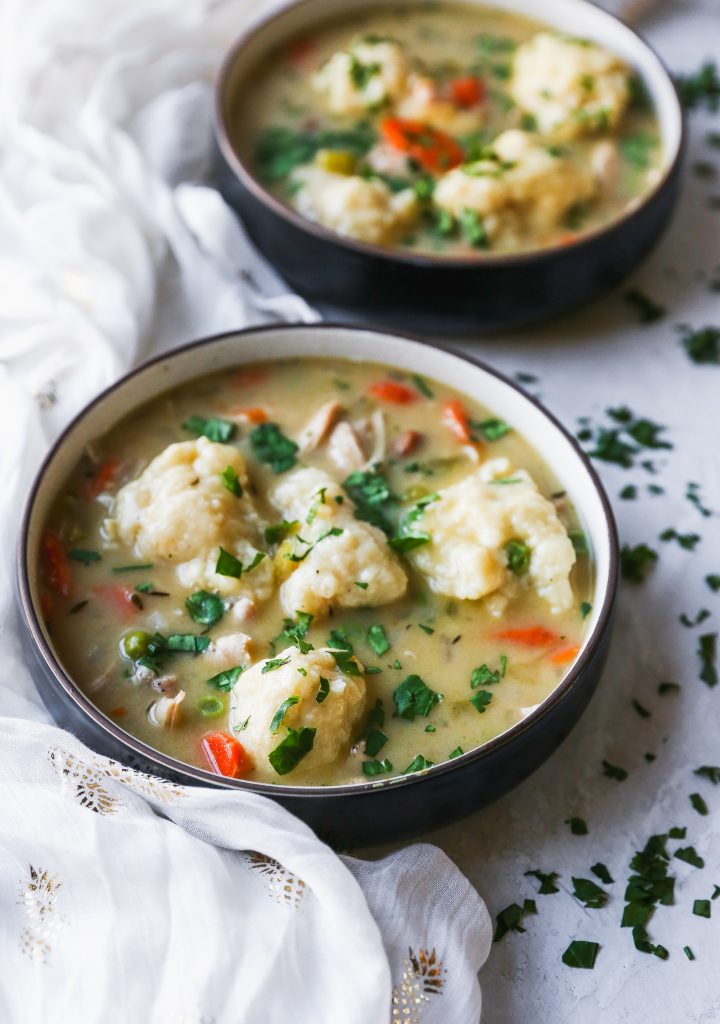 Rich, flavorful broth is loaded with veggies, tender shredded chicken, herbs, and a teensy hit of spice from fresh turmeric. The turmeric was a later addition to this recipe, and now I don’t think I’ll ever make it without it again. It adds a warmth and depth that I adore. The broth part of this dish is so rich and flavorful, that you could just eat it as a regular chicken soup. It’s fantastic. 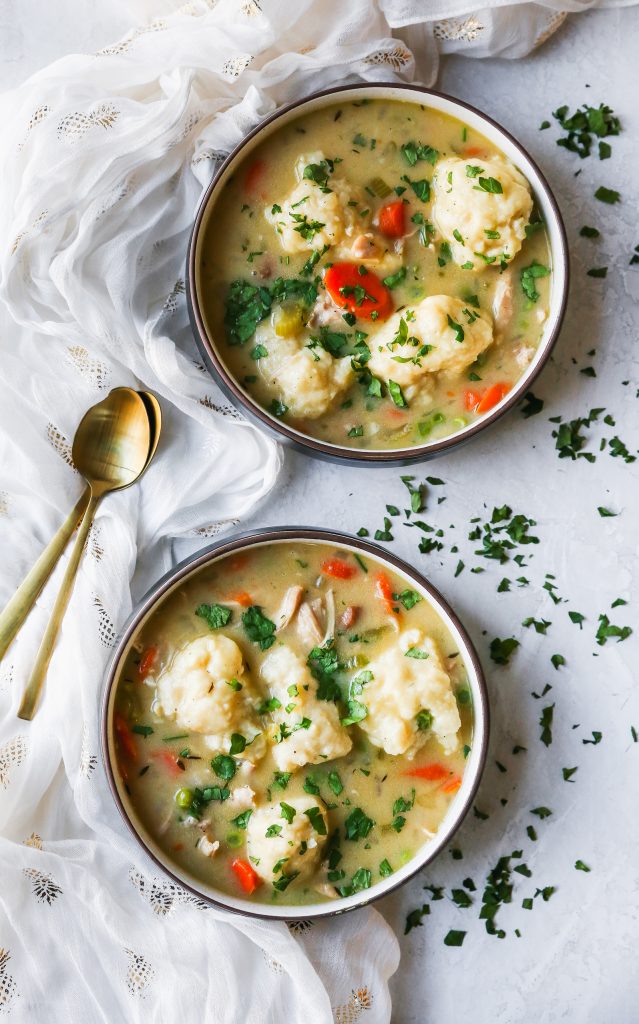 But, the addition of super fluffy and soft dumplings is really what takes this dish home. I like to add a little bit of Greek yogurt to the dumplings because I think it keeps them fluffier and lighter and also adds just a touch of tangy flavor, which I love. It almost brightens the dish up a bit, if that makes sense. And the dumplings themselves couldn’t be easier to mix up. I bet you have all the ingredients on hand already. 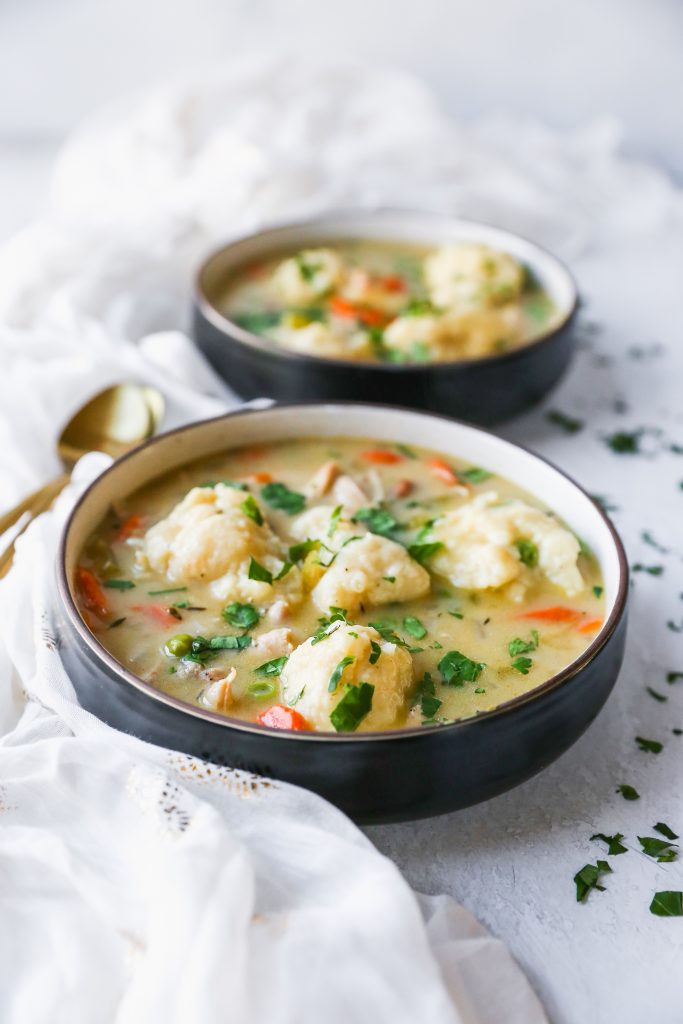 After the soup base as cooked and simmered and gotten wonderfully delicious, you drop in the dumpling dough in dollops all over the surface of the broth. You poach them until they are fluffy as clouds and melt-in-your-mouth tender. And then you’re ready to serve!

This is the ultimate comfort food dish for me, and Dan agrees. We devoured a pot of this last week, and I don’t think either one of us had any regrets. 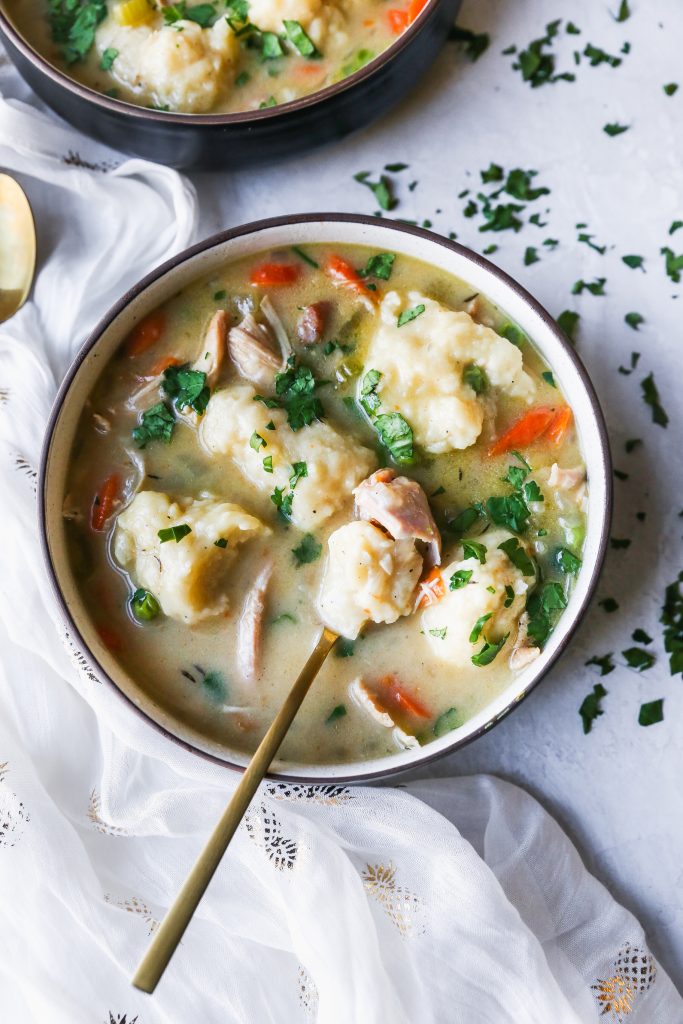 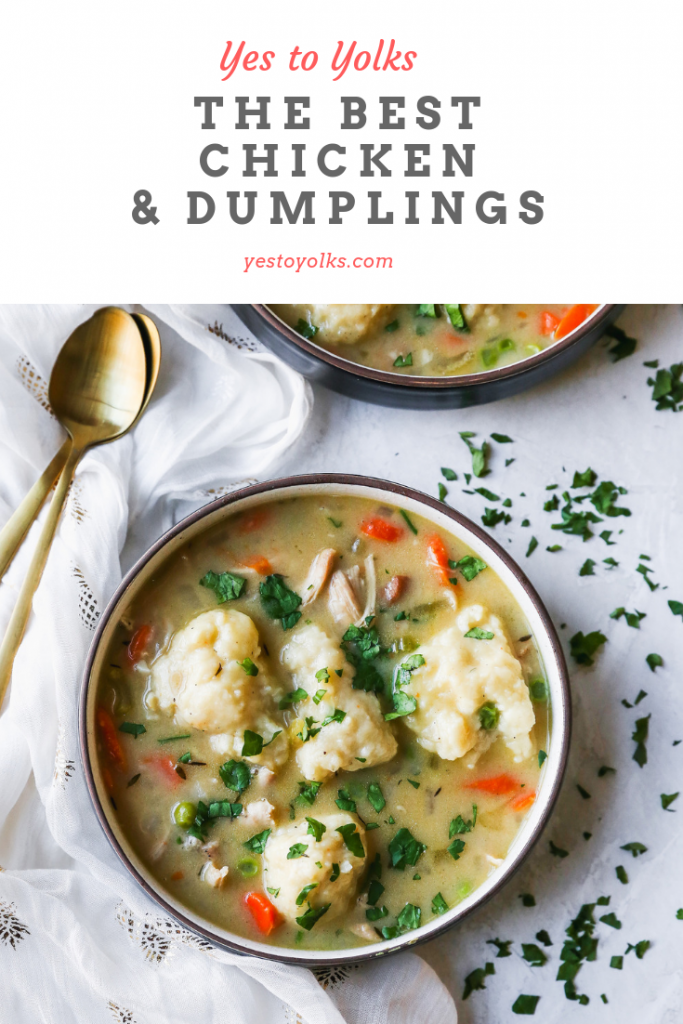