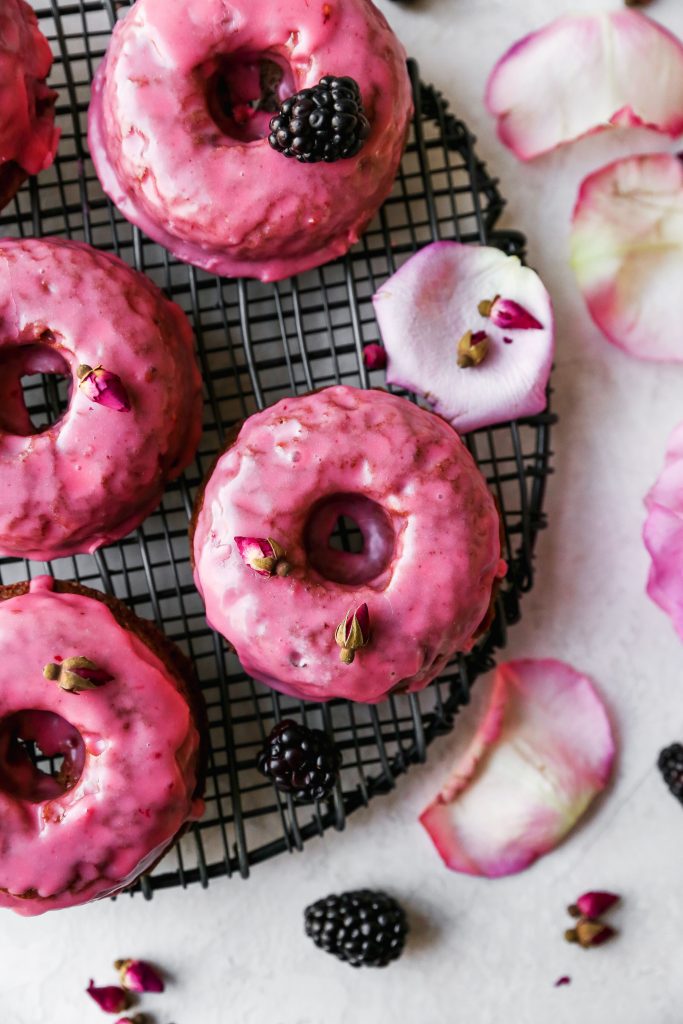 Spring weather is finally starting to show itself!

Sure, it’s been slow going (it always is), and we’re not 100% in the clear yet, but I am LOVING these slightly warmer days and abundant sunshine. It makes all the difference in my mood. 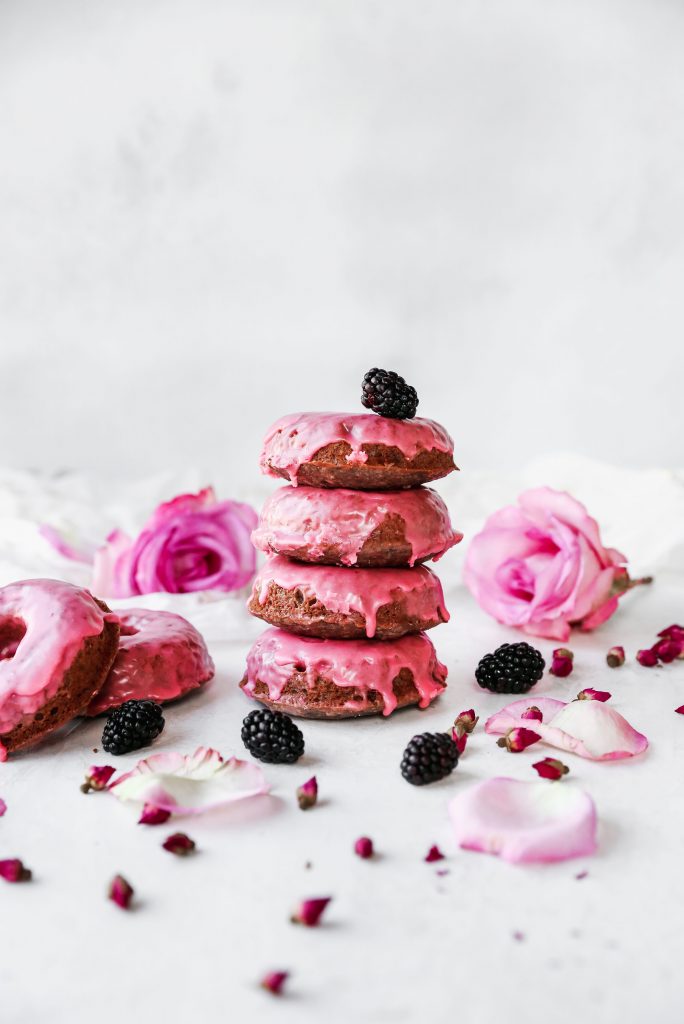 To celebrate, I made us the springiest of spring donuts! 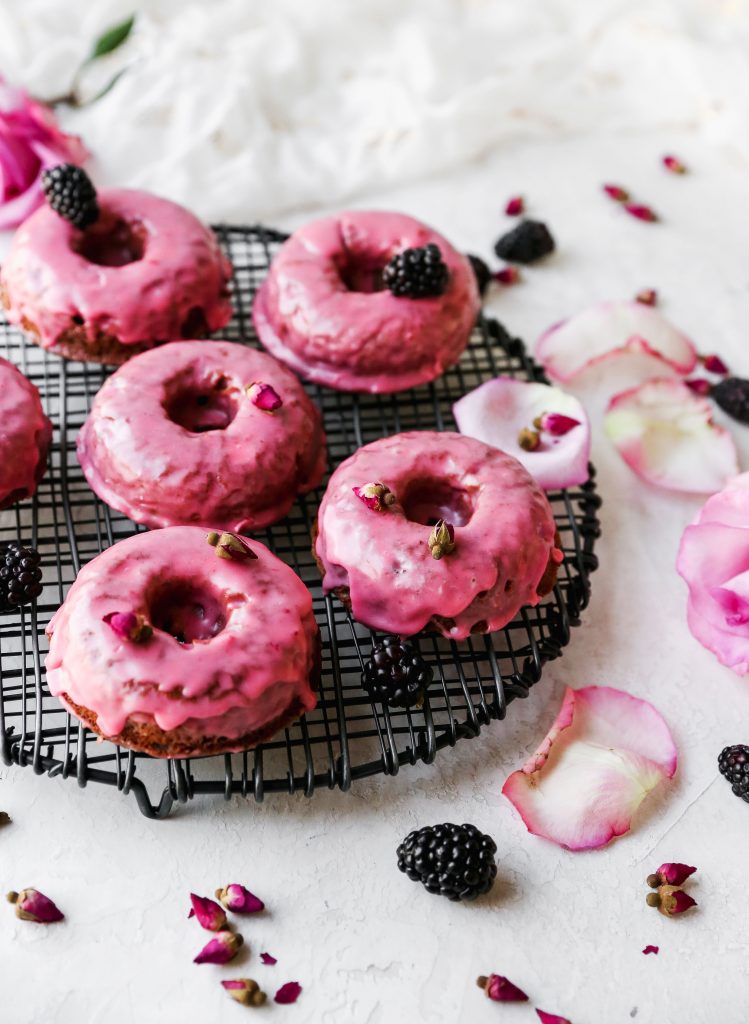 I have always been a sucker for a blueberry cake donut. Like, the ones from Dunkin Donuts (no shame). I absolutely love the fruity sweetness they have, and the cake-like texture is heavenly. They’re perfectly sweet but not overly so. Definitely one of my fave donut flavors of all time. 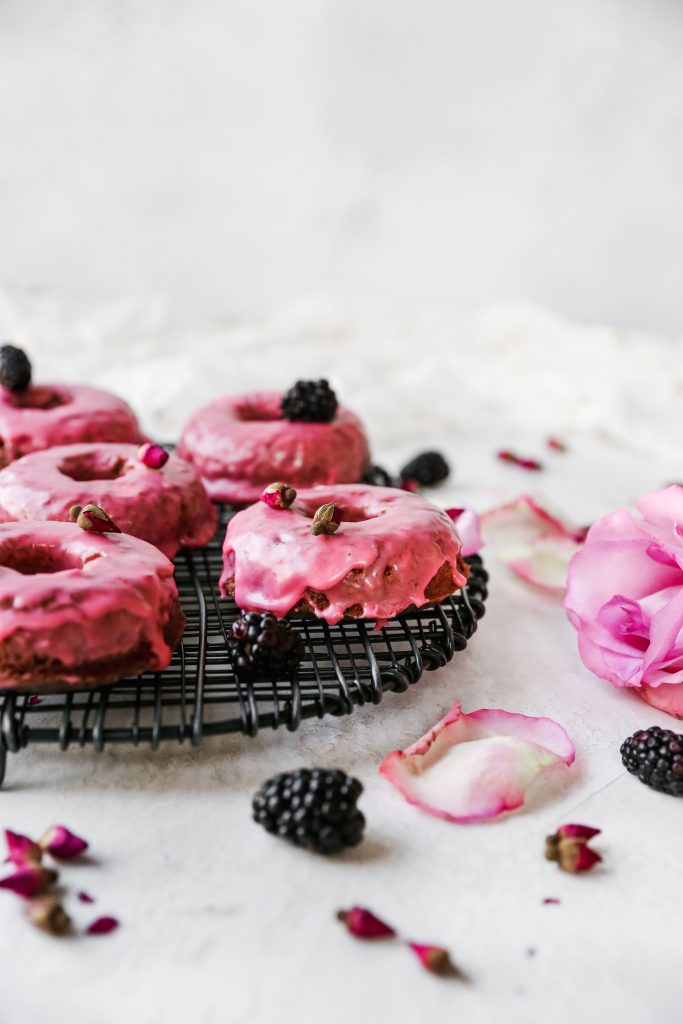 I wanted to create something similar at home, and I decided to switch up the berry flavor from blueberry to blackberry. I have said this before, but I think blackberries are underused and under appreciated. They’re delicious! And gorgeous to boot. 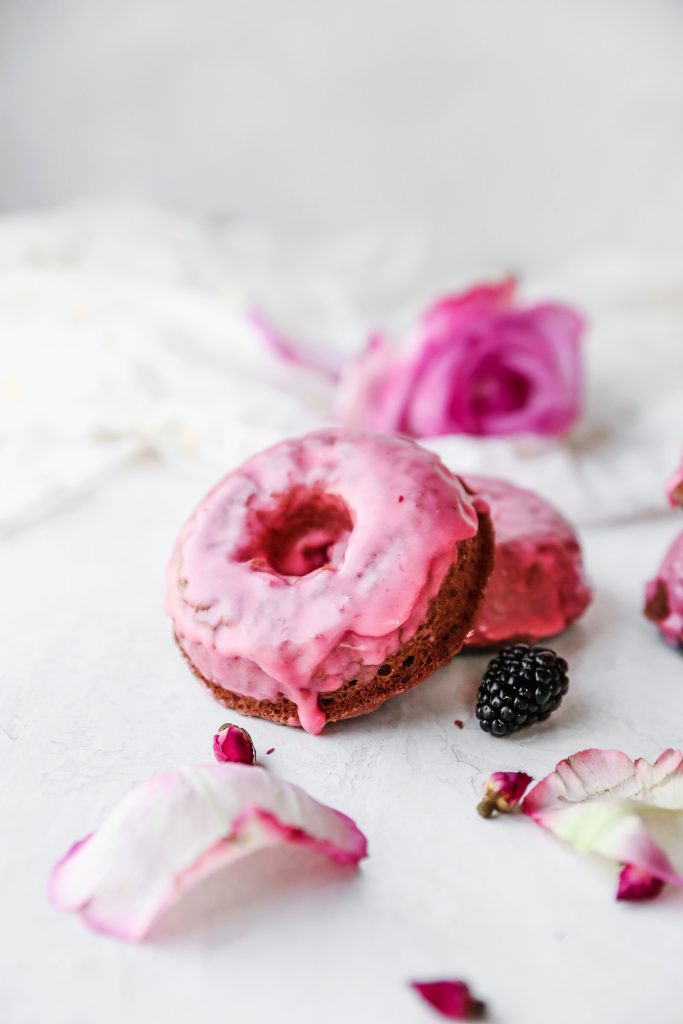 They were a good choice for these donuts. Look at the color they impart! Plus, they totally embrace that sweet-but-not-too-sweet thing I was going for. They are like a blackberry muffin! Fluffy and light and fruity. 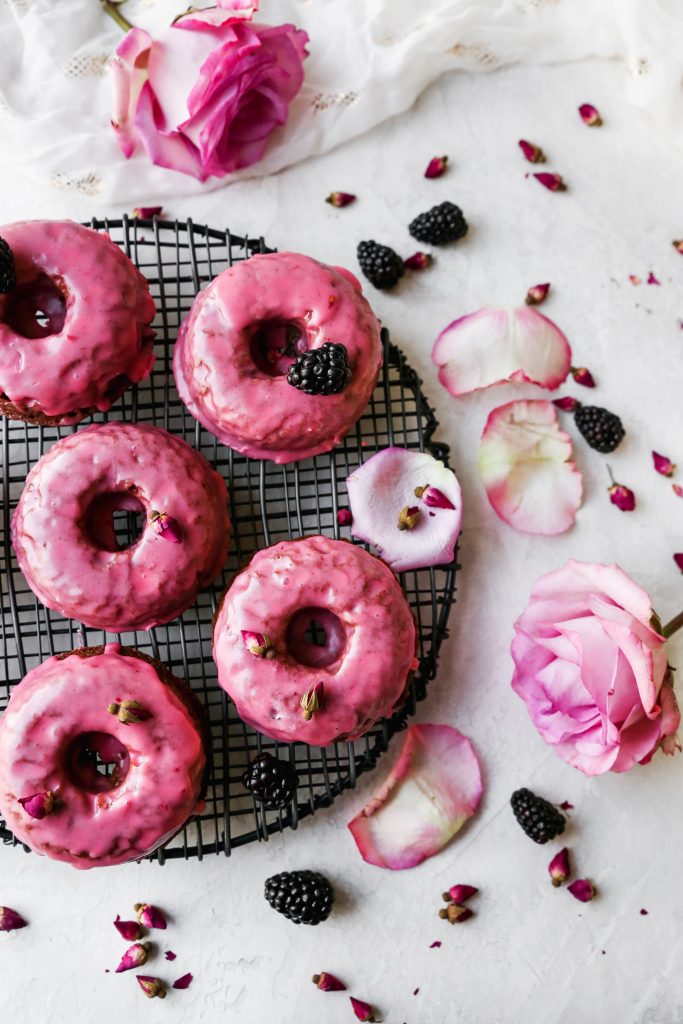 I love that these are baked and not fried. It makes donut making so much more approachable for the everyday cook. Plus, no vats of oil are necessary, and that’s always a bonus in my book. All you need is a donut pan. This one is my absolute fave – NOTHING sticks to it. The donuts come out perfectly every time.

The batter is fairly quick and easy. The only extra step we have here is creating a blackberry puree that gets used in both the batter and the glaze. Two birds, one stone. Other than that, it comes together with minimal effort and probably with ingredients you already have on hand. 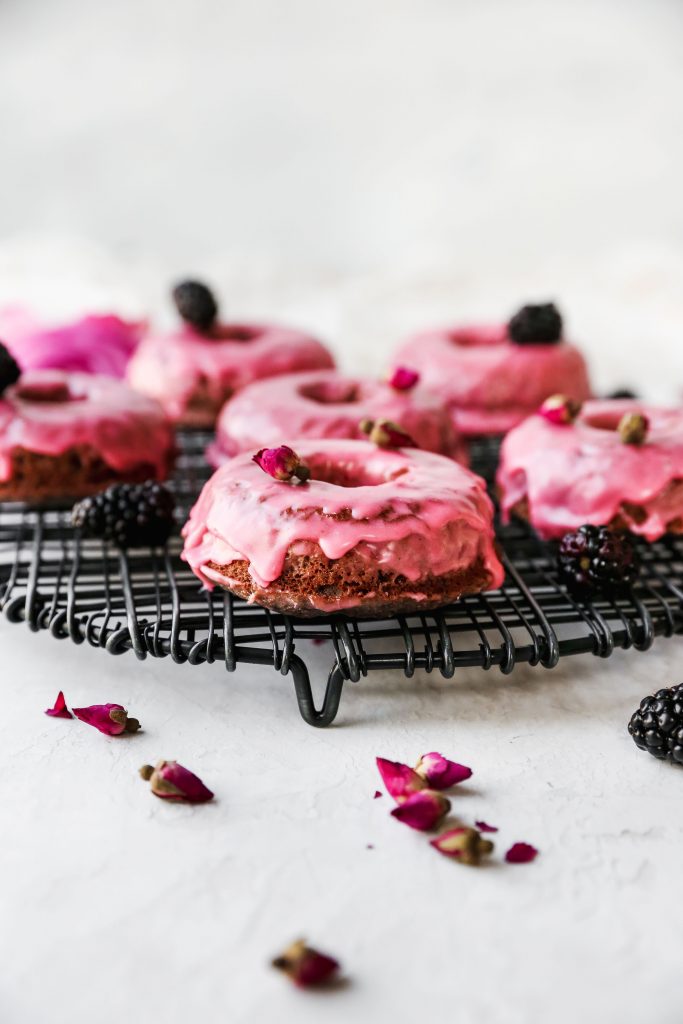 Love when that happens.

Load up your donut pan with the batter, bake ’em off, and whip up the glaze in the meantime. Once the donuts are cool enough to handle, place them on a cooling rack set over a sheet pan and glaze the heck out of them. Trust me, you don’t want to be light with this stuff. I could drink it, it’s so good. 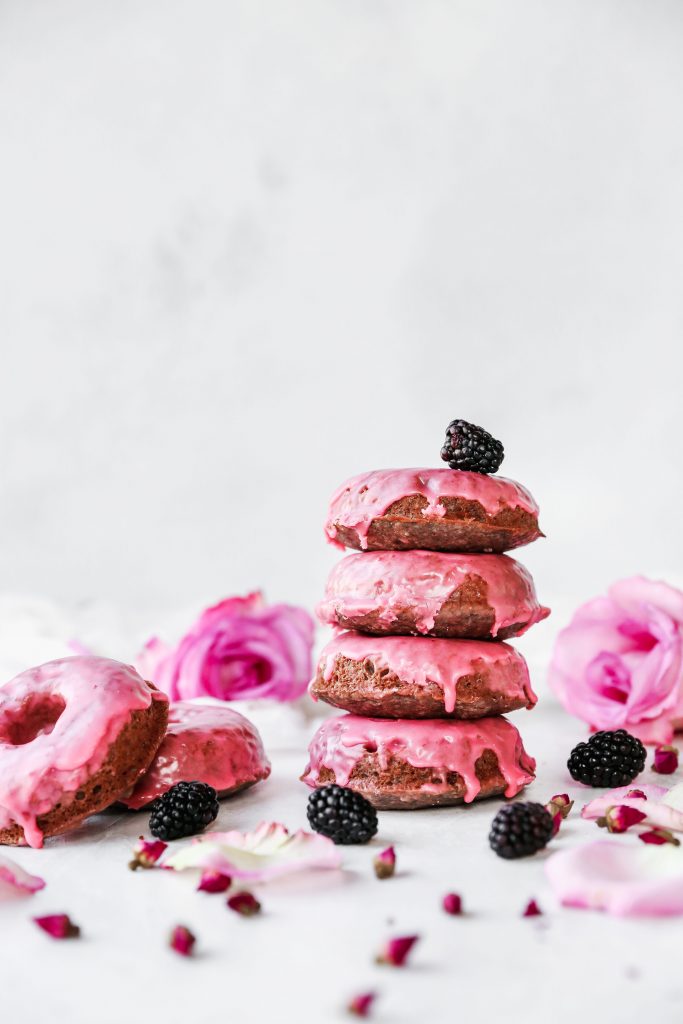 Really pour it on there, so that it’s dripping all down the sides of the donuts and creating glorious glaze puddles that you can clean up with your finger/mouth later (not that I’d know anything about that. Ahem).

Allow the glaze to set for a few minutes and then GO TO TOWN. 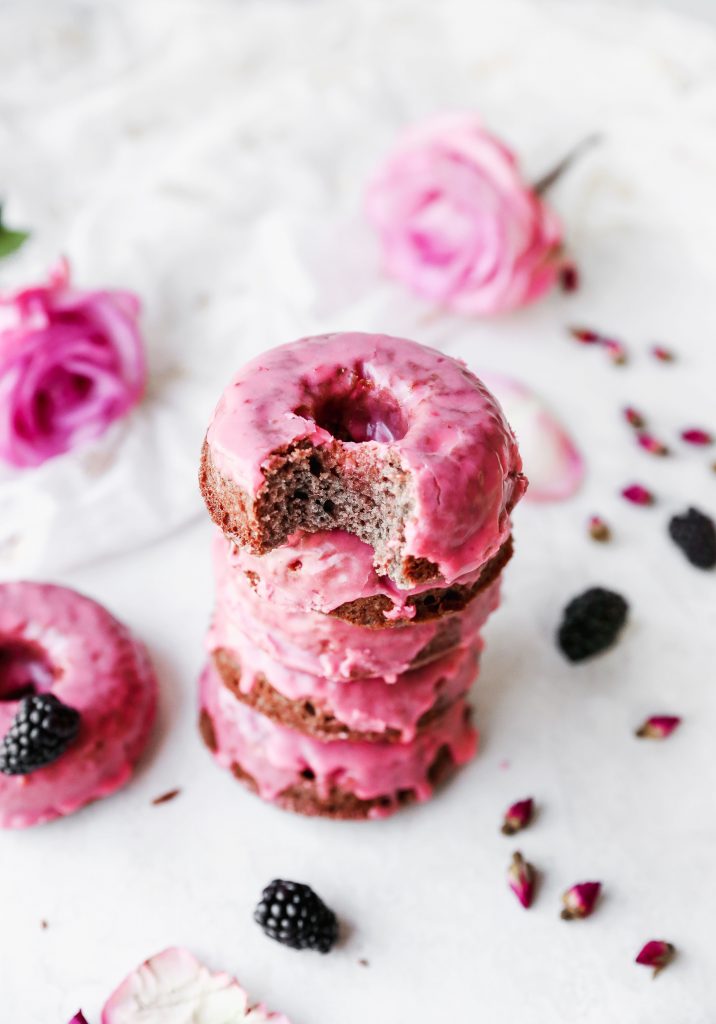 These are addictingly good. I ate 2-3 in an afternoon, sneaking bites here and there over the course of a few hours, telling myself that each bite would be my last. Ugh. SO YUMMY.

Dan, who isn’t a big fan of blackberries OR cake donuts, loved these too. Between the two of us, the batch disappeared in record time.

I guess I wasn’t the only sneaking bites? 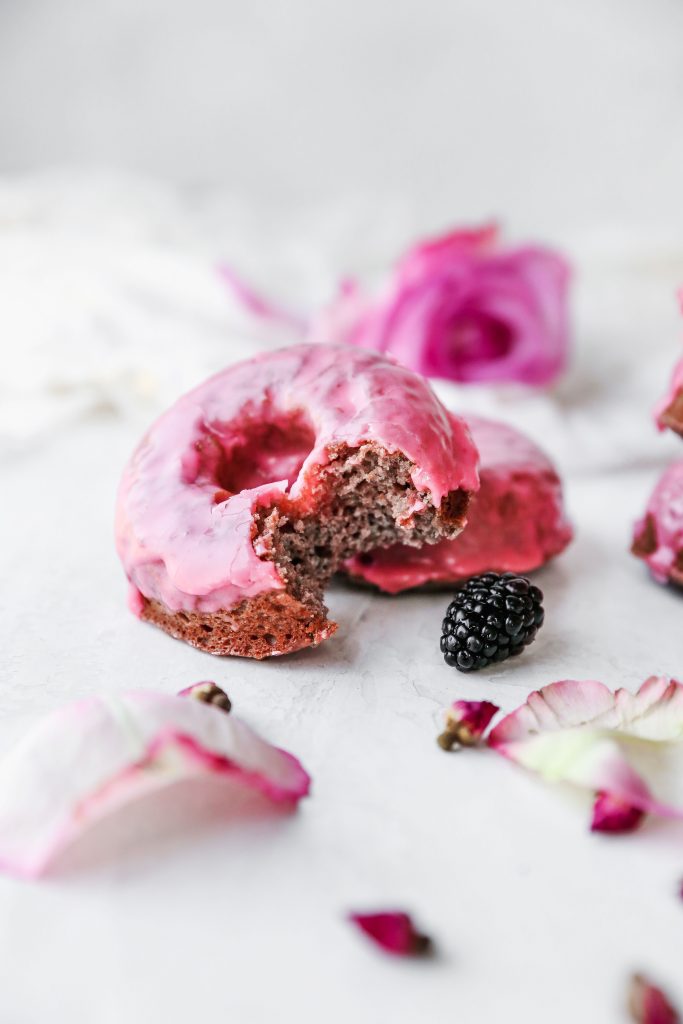 Don’t blame him one bit. 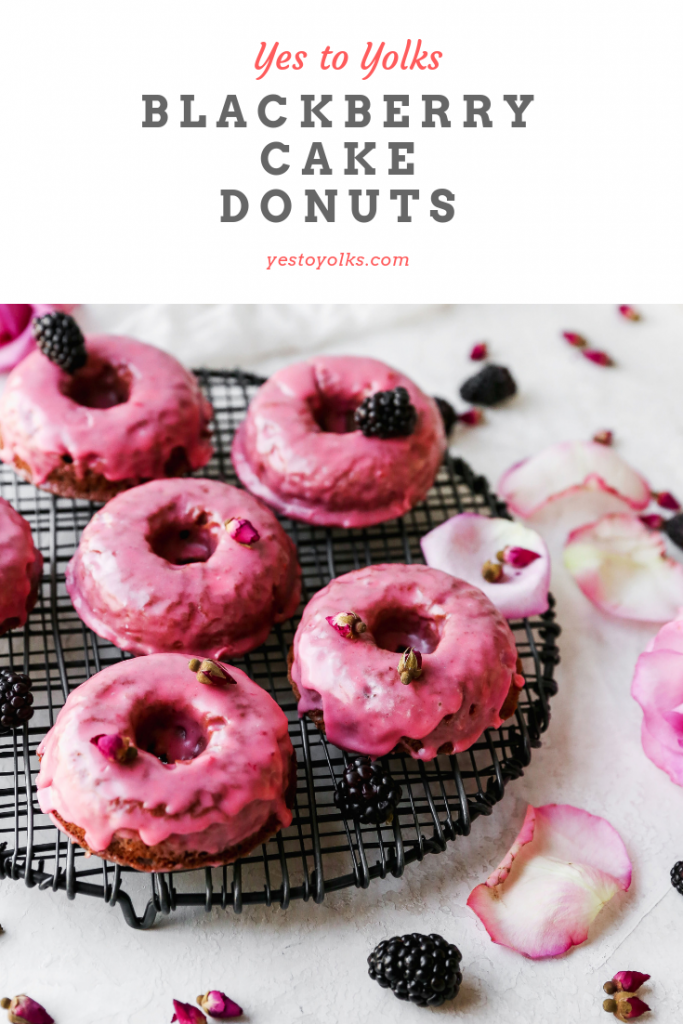