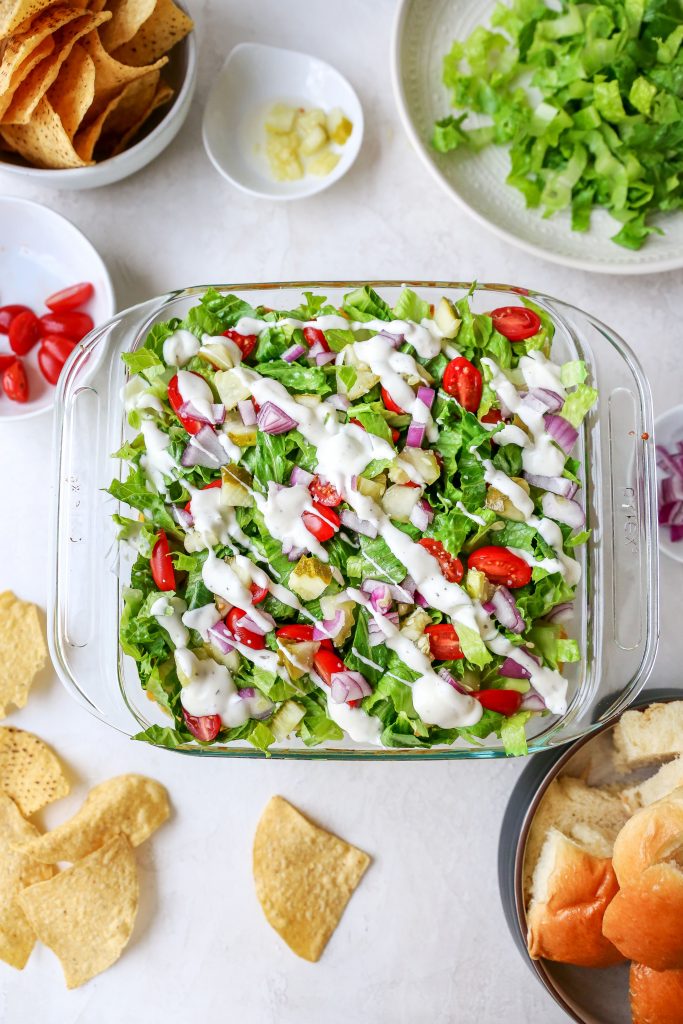 I hope you aren’t offended by today’s recipe.

I find that people are split right down the middle when it comes to recipe riffs on cheeseburgers. And I sort of get it!

My sister used to insist (actually, she still insists) that cheeseburger pizza was one of the best variations of pie. And I was NOT about it. Nope, no thanks, not interested. It just sounded…gross?

I believed that cheeseburgers and pizzas should stay in their own lanes. 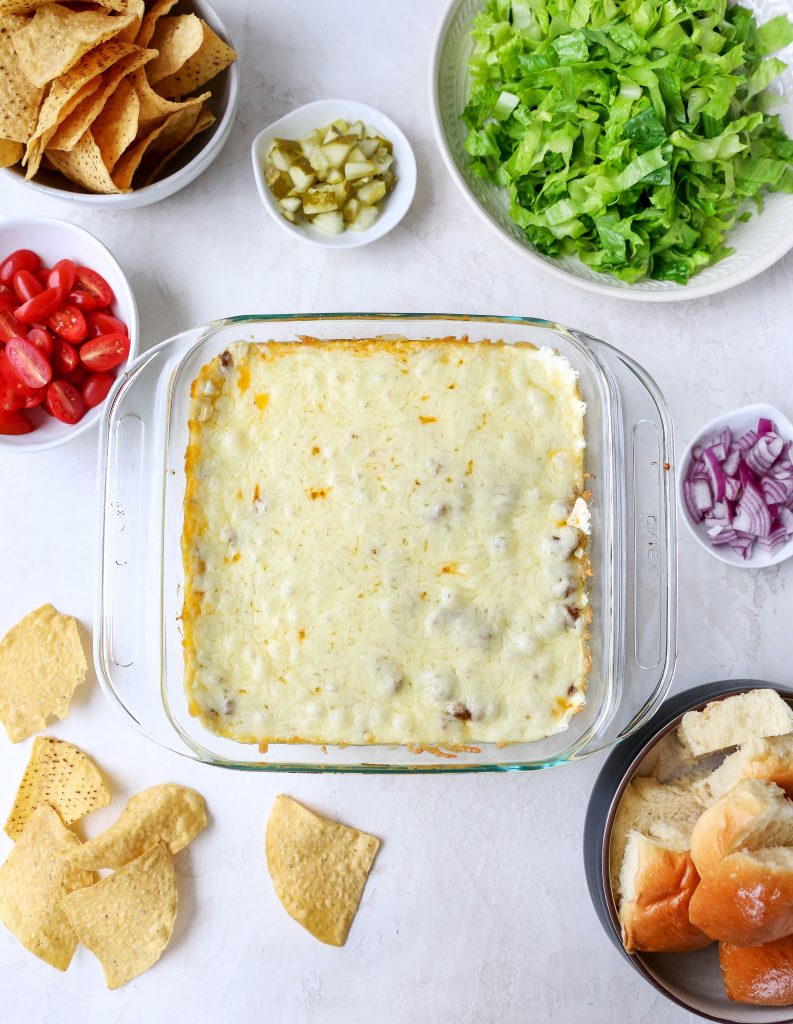 And then she wore me down and I tried it. And I totally got it. Cheeseburger ingredients on top of cheesy pizza? Um, yes. It just worked, despite my previous hesitancy.

I then found myself way more open to cheeseburger-themed recipes that were not actual cheeseburgers. Case in point: these tacos. So flippin’ good. They might sound weird and they definitely are not everyone’s cup of tea, but trust me when I say that they are DE-LICIOUS. 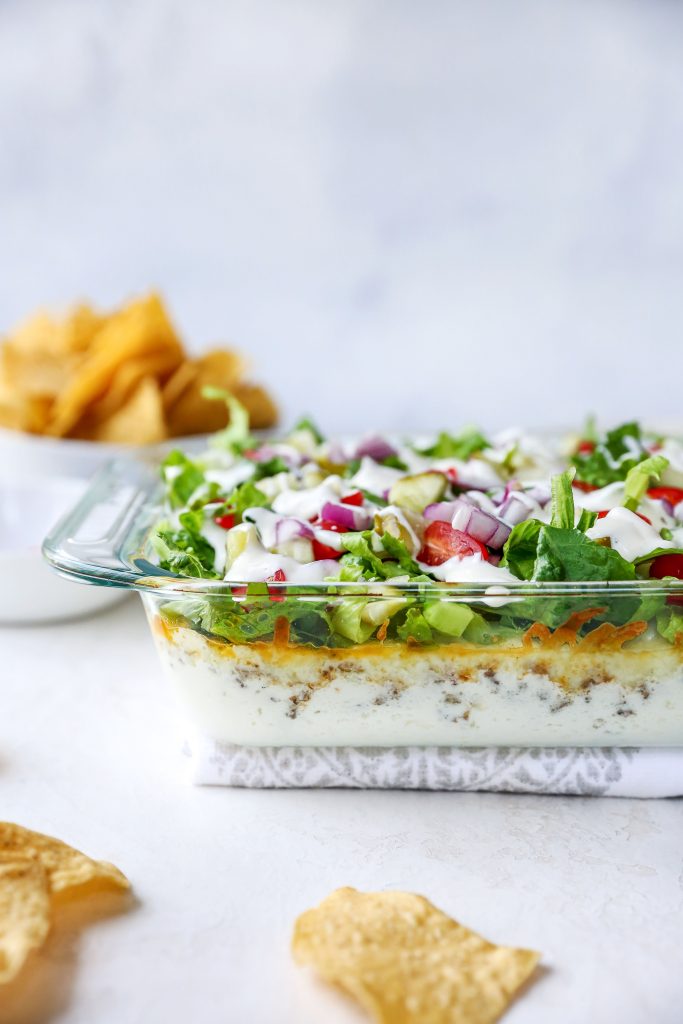 Deconstructed or reenvisioned cheeseburgers were a THING in my life now.

Today’s dip recipe is along the same lines as the pizza or tacos. It’s probably not appealing to everyone, and it might sound straight-up gross to others, but I’m going to ask you to trust me again. It’s cheesy, gooey heaven! It’s like eating a burger on a chip! So good.

Sure, it’s not the classiest thing to serve. It’s certainly not an “elevated” recipe. But ya know what, that’s totally OK. Not everything has to be fancy or borderline pretentious, right? Let’s just get down and dirty and enjoy some tasty, gluttonous dip, shall we? 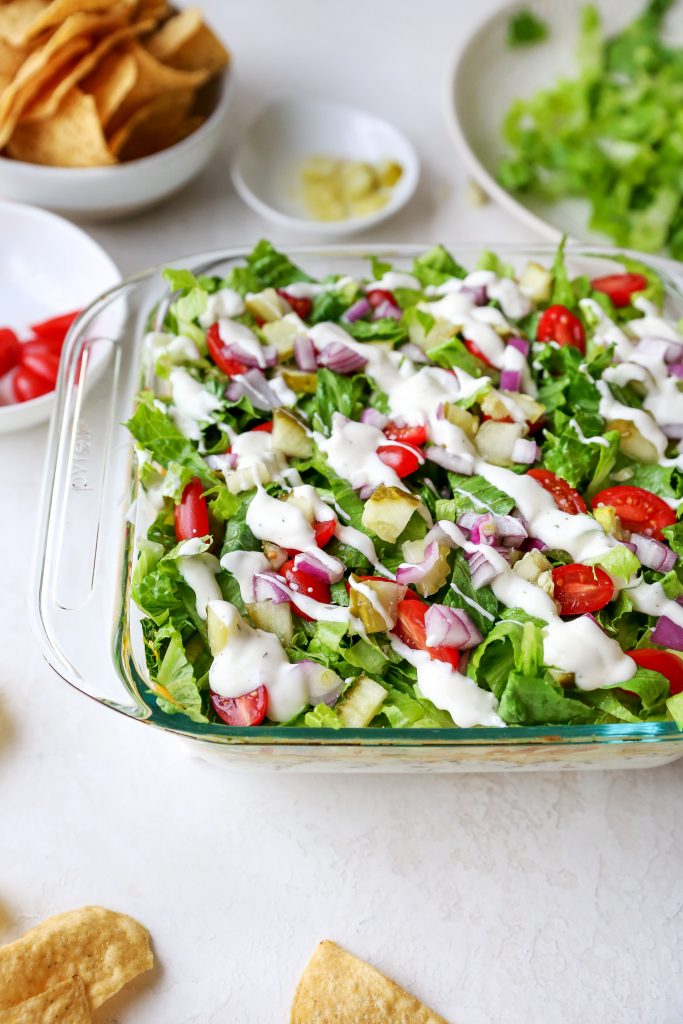 This concept came to me a few months ago, and I just recently had a chance to try it out. Even though I was stoked about the idea, I still had my hesitations. Would this be something that people would like? Would it even taste good?

I ran the idea by my sister to see if it was too trashy, and she assured me that it sounded amazing. I then tested it on my guinea pig for life, Dan, and he loved it. Even Kieran was curious about it (and that’s saying something – most of the time, he takes one glance at new foods and declares “I don’t like that”). 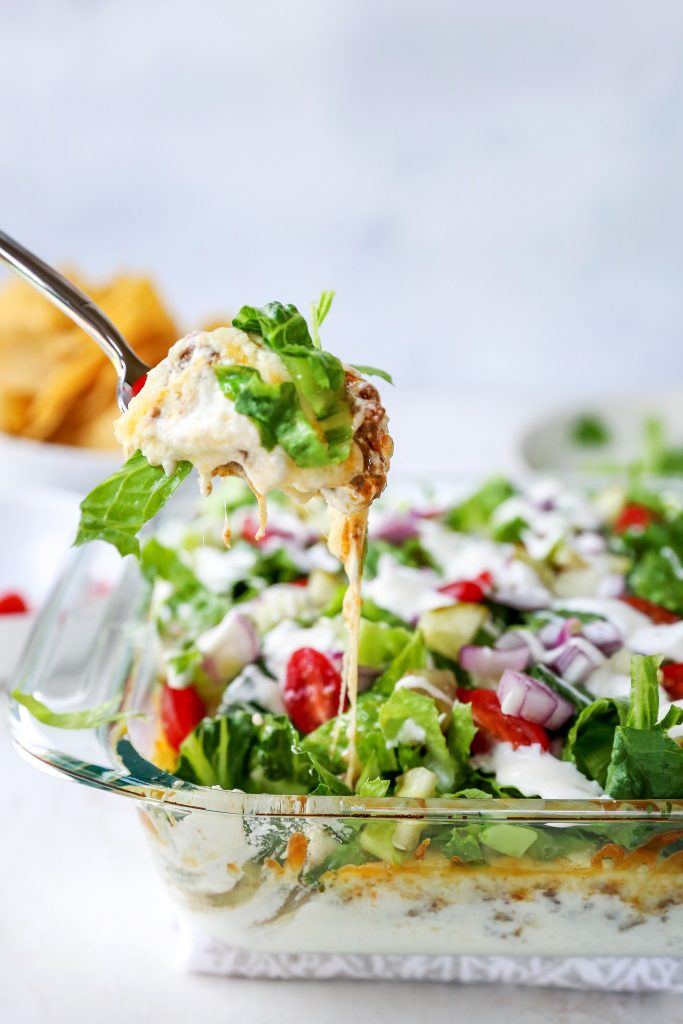 Even as I was preparing and assembling this dip, I was still questioning my decisions. I still wasn’t sure if this would work.

My first bite of this dip was glorious. It totally smashed any trepidation I was feeling. Really, what’s not to like here?

It’s gooey. It’s cheesy. It’s beefy. And it has crunchy, fresh toppings! Just how I want my burgers to be. I loved it scooped onto a little slider bun, to mimic that cheeseburger experience, but Dan really loved it on tortilla chips. Heck, I would even eat this scooped out on sliced veggies. 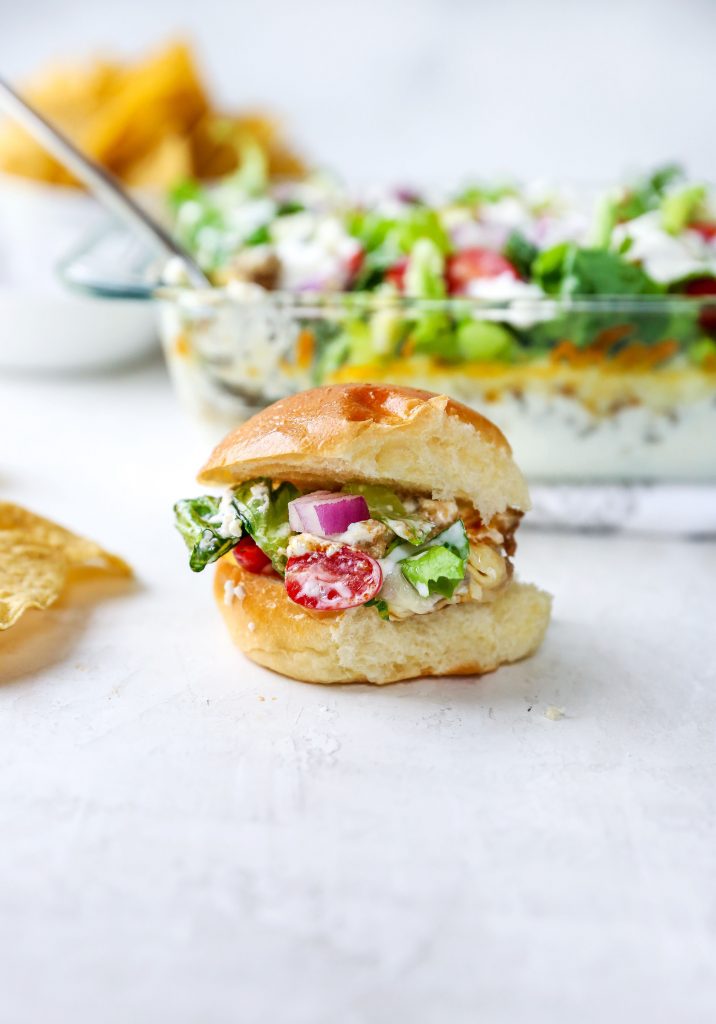 I envision you sharing this with your friends this weekend, outside on your patios or porches, icy cold drink in hand. Maybe a baseball game is on the TV? Maybe you’re tossing around a football? Maybe the kids are running around the yard playing tag? 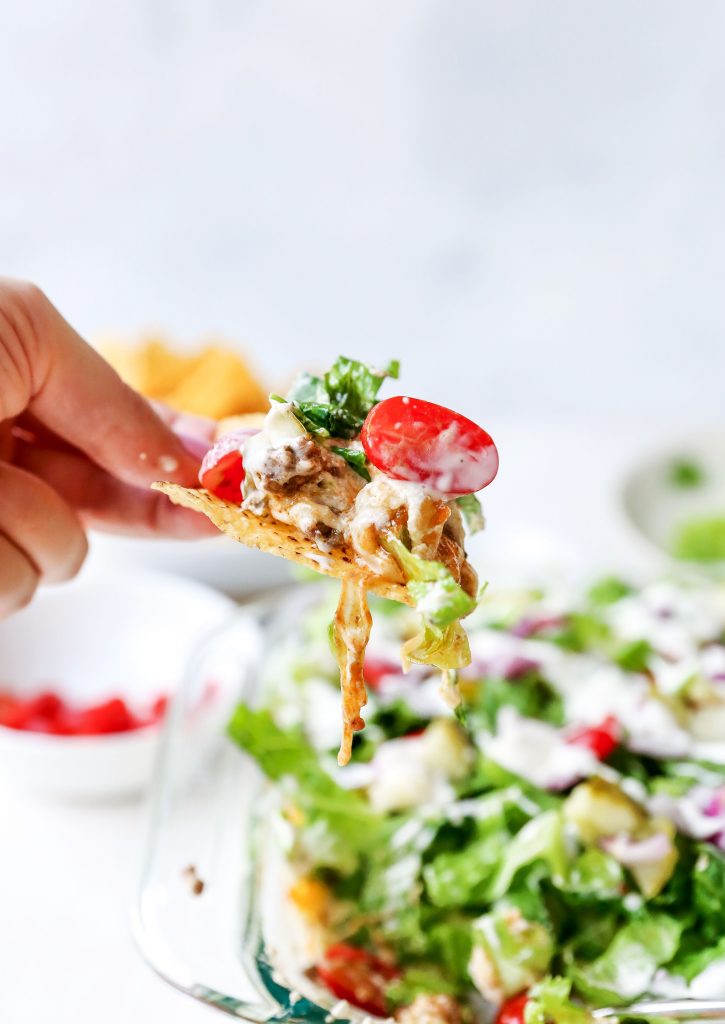 Yes please to all of that. Let’s do this. 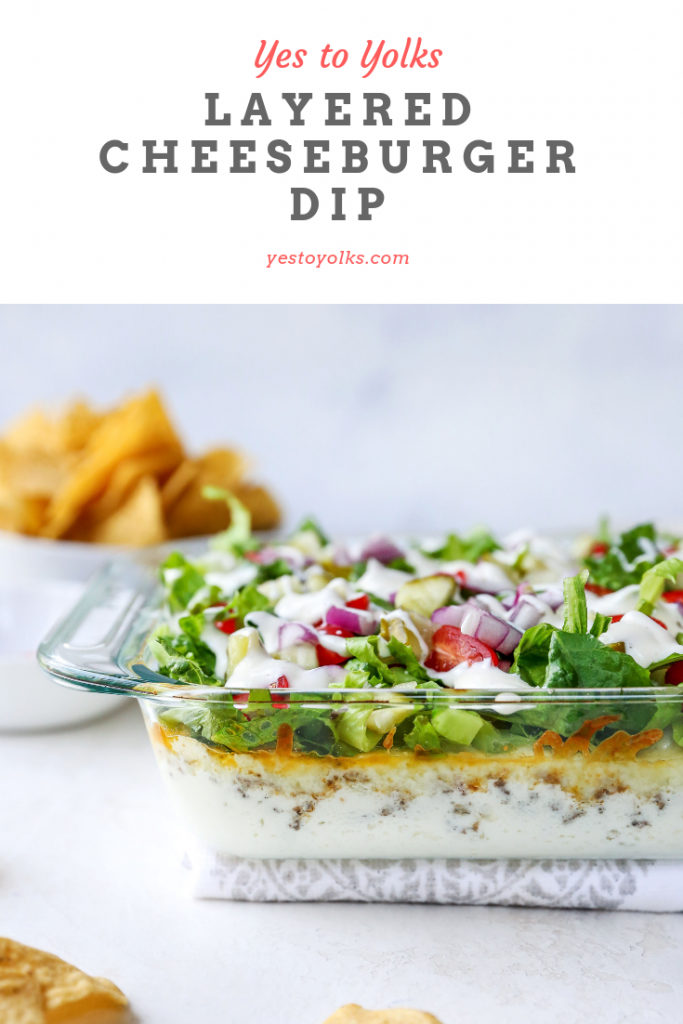