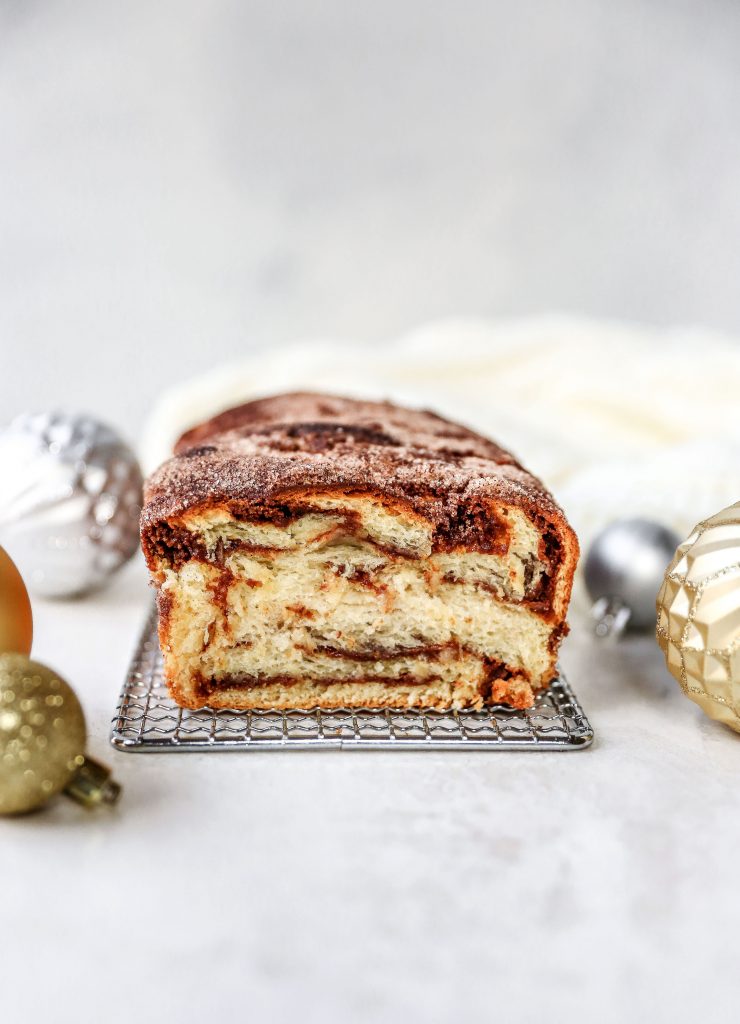 After a much-needed, somewhat-unintended blogging hiatus, I am back. And today’s recipe is a DOOZY, friends.

Today, we’re kicking off the holiday baking season right with Snickerdoodle Babka!!!!!!! Yes, all the exclamation points are needed.

This stuff is insane. It’s so good, in fact, that I needed it out of my house ASAP, for fear that I would literally (and yes, I do mean literally) eat every last morsel of this babka. I sent every beautiful slice to Dan’s office with him. And then I wept. Hah. 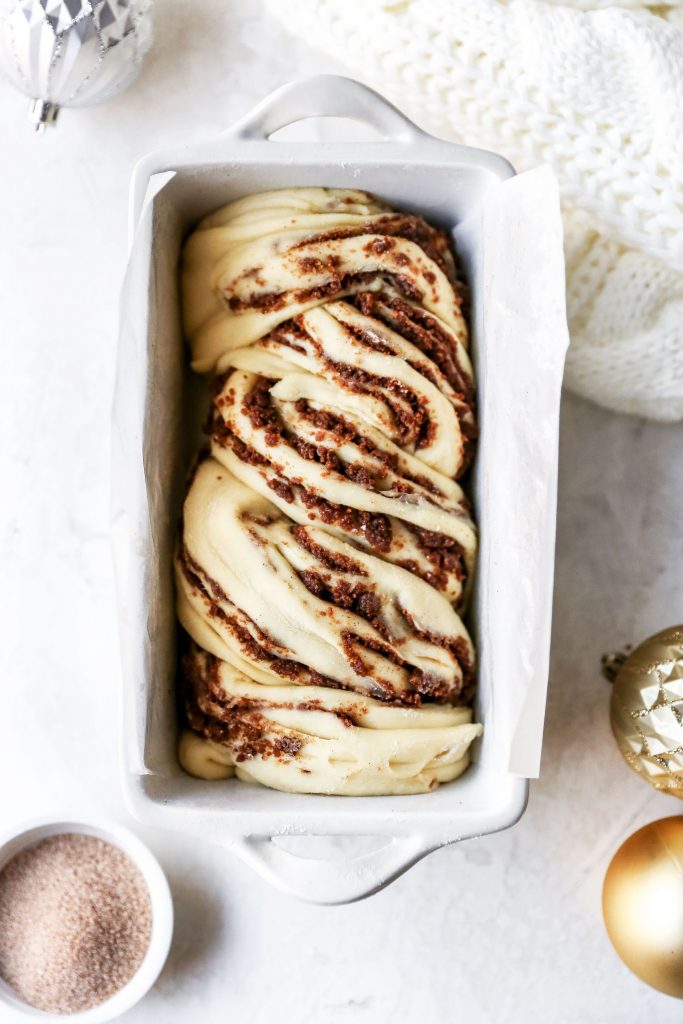 Before we get into it, though, I want to know: how was your Thanksgiving?! Ours was lovely. We went to Florida for six days! We have never traveled for Thanksgiving before. In fact, I usually host it at our house for both sides of our families. But! Dan’s sister just had a baby in October, and we knew that we needed to get down to Florida ASAP to get our hands on him and so our kids could meet their first cousin.

It was fun and exciting (especially for Kieran) to get on a plane and sneak away to somewhere warm and sunny for a few days. We did a lot of relaxing, baby snuggles (eeeep! the best!), and of course EATING. My kind of long weekend. 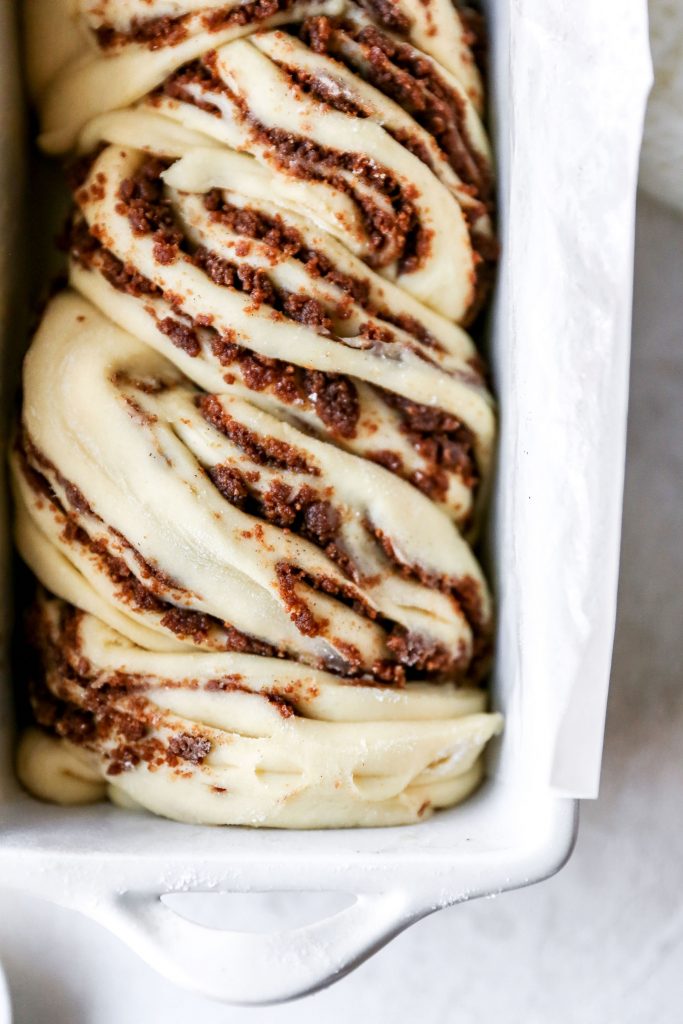 We booked the trip months ago, and it completely snuck up on us! Even though Thanksgiving was so late this year, it still felt like it crept up on me. Anyone else? And now, the time between Thanksgiving and Christmas is SO SHORT! I have zero shopping done, which is completely unlike me. We don’t even have our tree up yet!!! Again, so unlike me. It usually goes up on Black Friday. We’ll probably tackle it one night this week.

In summary: I’m entering into the holiday season completely unprepared and in a very-unlike-me way. Disorganization is NOT my thing, but it seems to be the general theme as of late. 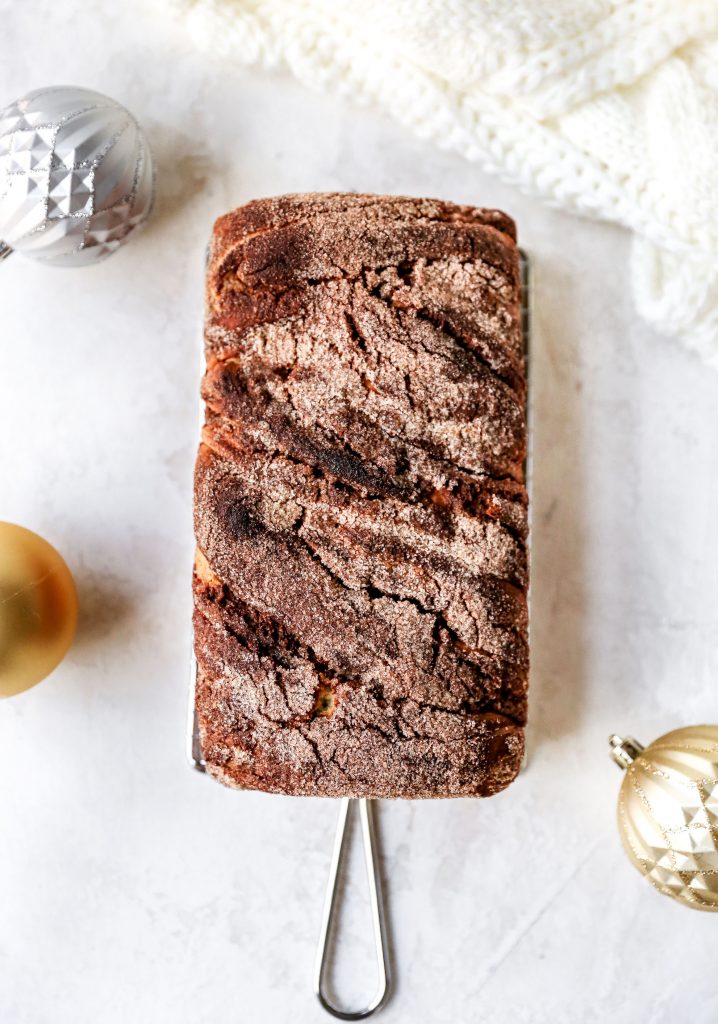 Oh well! At least we have babka!

Babka, in case you don’t already know, is a traditional Jewish yeasted baked good that is fluffy, moist, and usually has swirls of something delicious on the inside. Cinnamon and chocolate are the two I’m most familiar with, but I know it comes in all different flavors. Last year, I tried making babka for the first time, and it was a glorious success. I still count that recipe as one of my finest baking accomplishments. It is DECADENCE at its finest, friends. 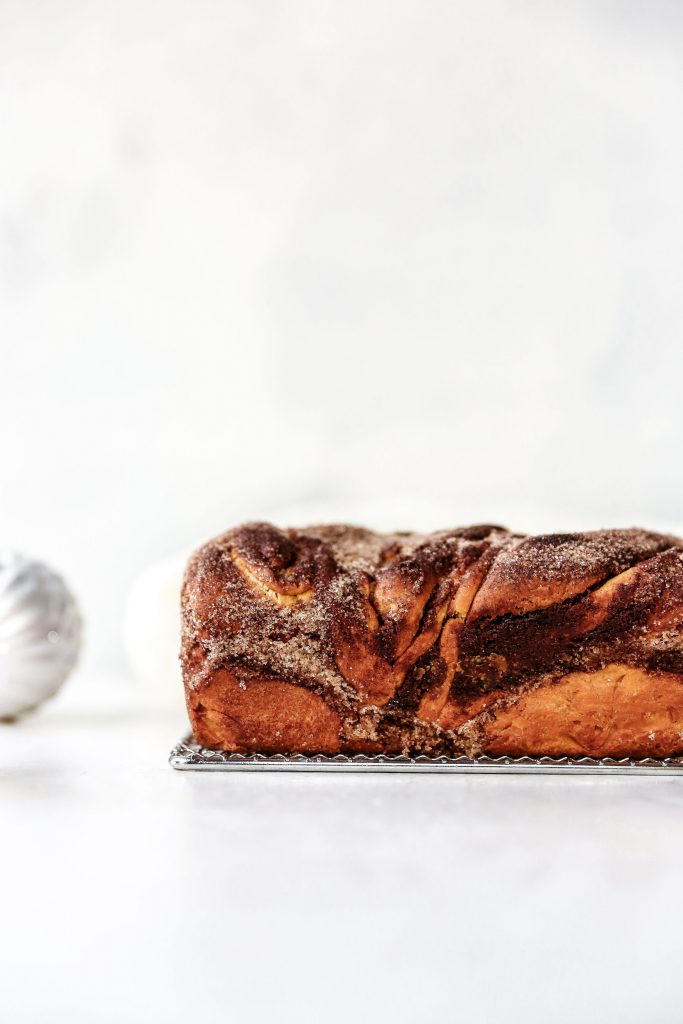 So, this recipe is a riff on that version – at least the dough recipe is the same, save for some extra cinnamon added in for more snickerdoodle flavor. Instead of chocolate and pistachios, I stuff this babka with a mixture of brown sugar, cinnamon, butter, honey, and biscoff cookies! 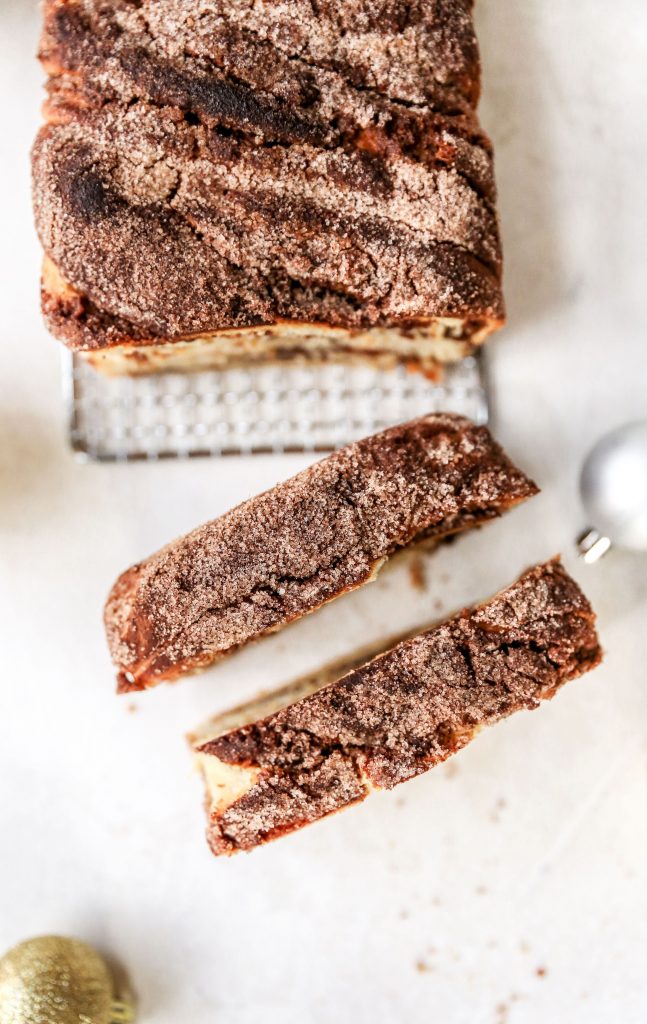 I love biscoff cookies (and I get disproportionately excited when they hand them out on an airplane)! They are perfect here because they are spiced with all the cozy flavors of holiday baking. If you can’t find them or don’t like them (gasp!), feel free to sub with cinnamon graham crackers. The cozy effect will be the same. 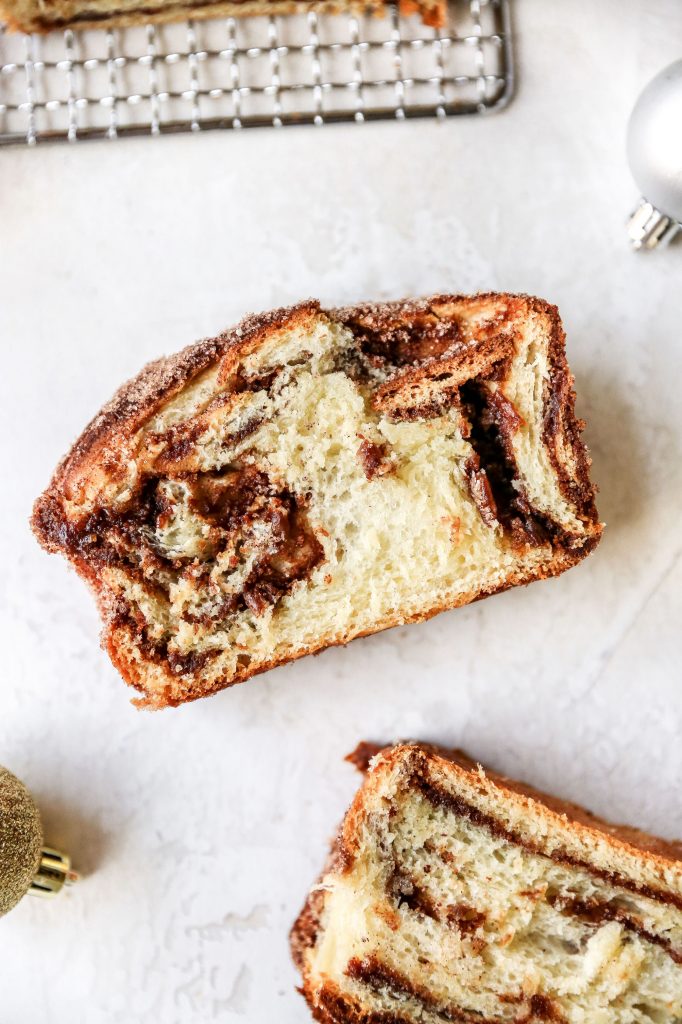 Once the babka are formed and risen, I coat them generously in cinnamon sugar. Again, to get that snickerdoodle effect. If you make this recipe, you may be freaked out at the amount of cinnamon sugar I am asking you to pour on top of these, but trust me, the result is fabulous. Not only does it sink into all the nooks and crannies of the babka, but it creates a thick (but not too thick!) cinnamon sugar crust on top….and that may be my favorite part of the whole situation. 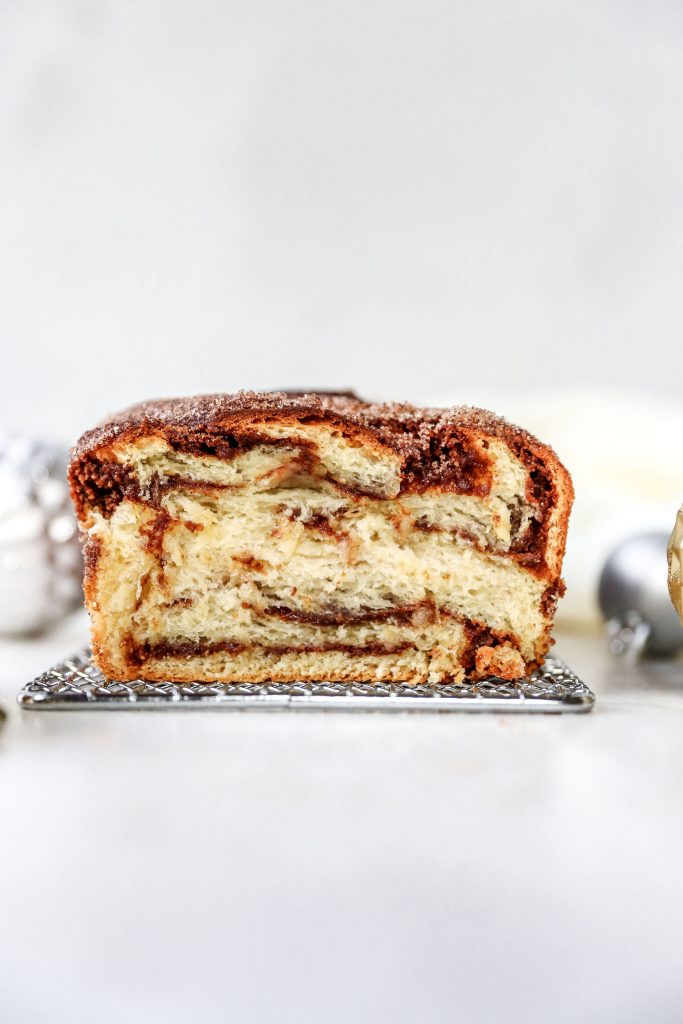 If you’ve ever made babka at home, then you know it can be daunting. Trust me when I say: if I can do it, YOU CAN DO IT. I am not a trained baker in the least, but I managed to make something amazing here. And remember: it doesn’t have to be perfect. Home baking is supposed to be rustic. Part of its charm is the imperfection! 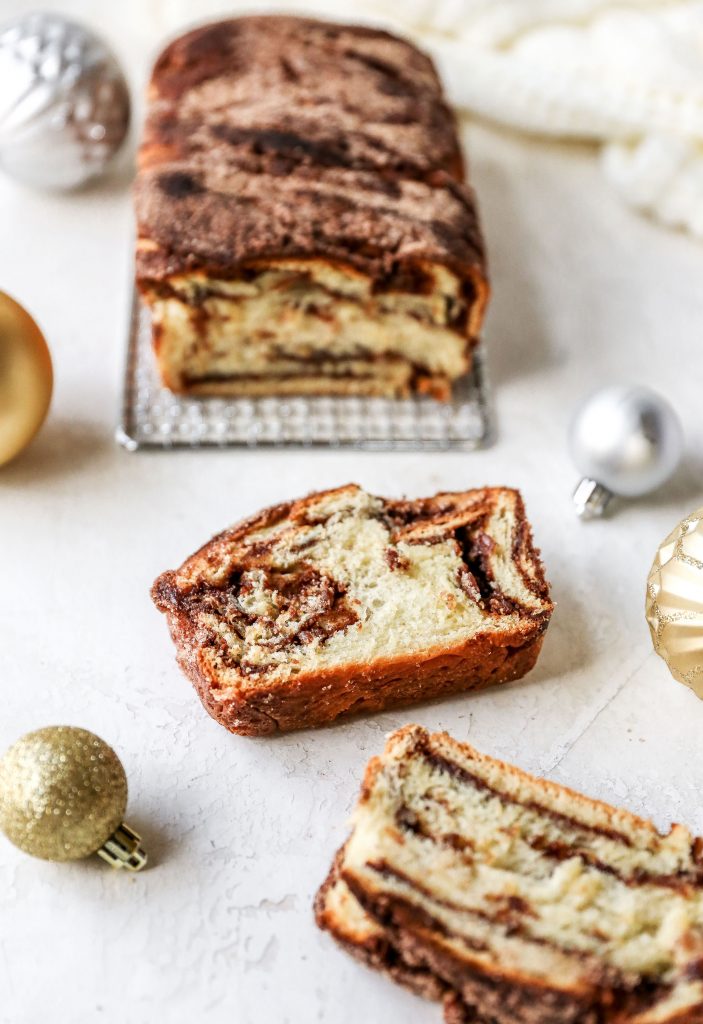 The actual steps of this recipe are NOT hard, but there are a lot of steps. And the recipe takes A LOT of time. I recommend making the dough a full night before you want to bake the babka. And even after they have had an overnight rise, been rolled out and filled, and formed into loaves, they STILL need to rise for another couple hours. 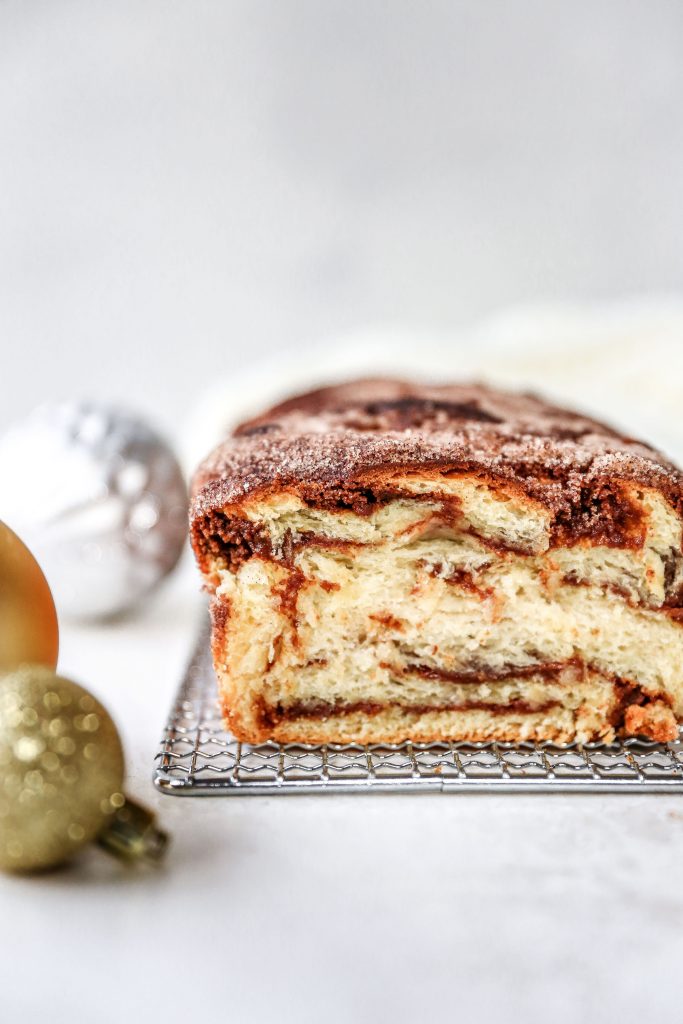 So keep that in mind. This is one of those “Patience is a virtue” recipes. Brought to you by yours truly, one of the least patient people on Earth. Haha.

I will be the first to admit, though, the wait is totally worth it. I want to bake these on the regular, but thank goodness I don’t have time for that. These are meant to be a special baked good, and I think this time of year is the perfect opportunity to take the time to make recipes like this.

Plus, snickerdoodle babka would pretty much be the cherry on top to any holiday cookie plate! I would do backflips if someone handed me a platter of this. 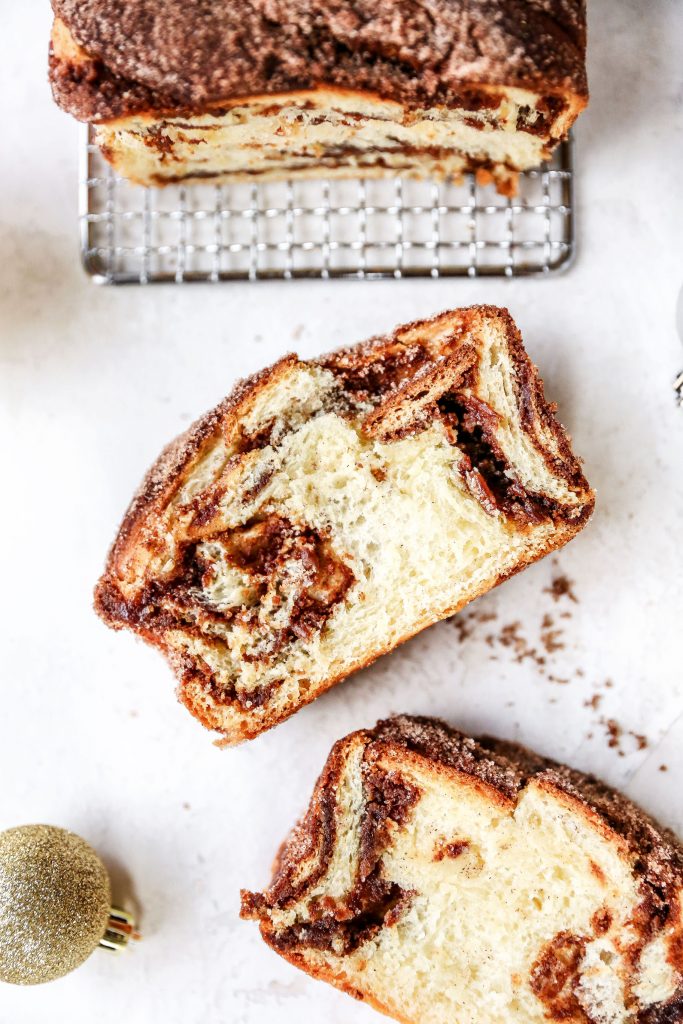 Happy holiday baking, friends! I beg of you to add this to your baking lists!

This Snickerdoodle Babka is the perfect addition to your holiday baking list. It is a fluffy yeasted dough filled and coated with the flavors of snickerdoodle cookies. It is a warm, cozy, and festive bite!

The Night Before You Want to Bake:

This babka is very fluffy and moist, and can be kept well wrapped at room temperature for several days. I recommend slicing it as you need it to prevent the entire loaf from going stale. It is delicious at room temperature, but my favorite way to eat it is slightly warmed from the oven or toaster. 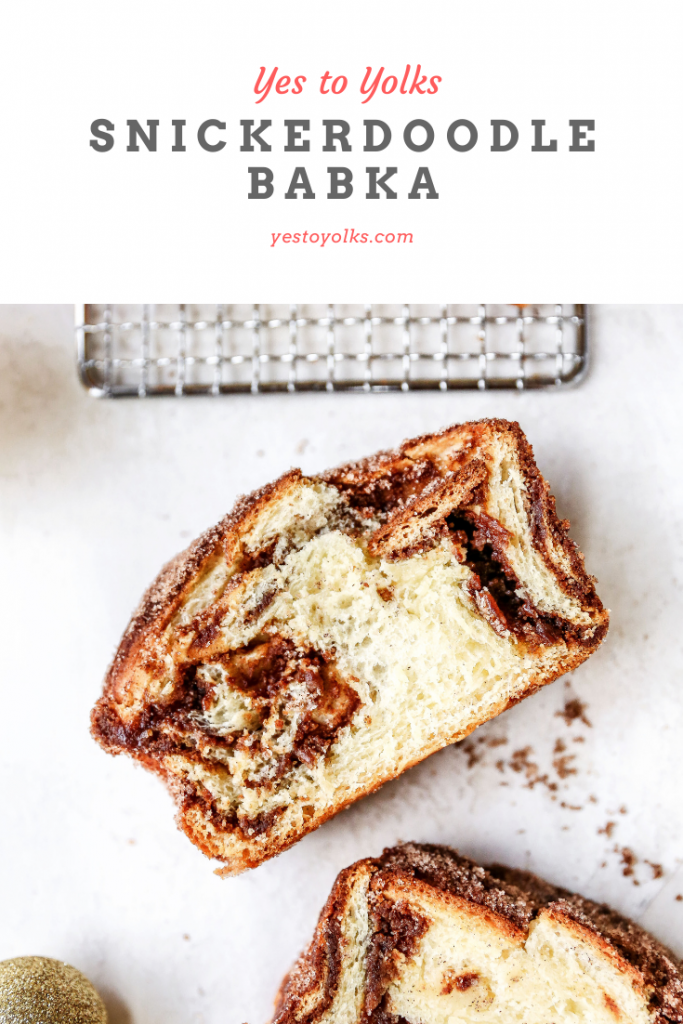