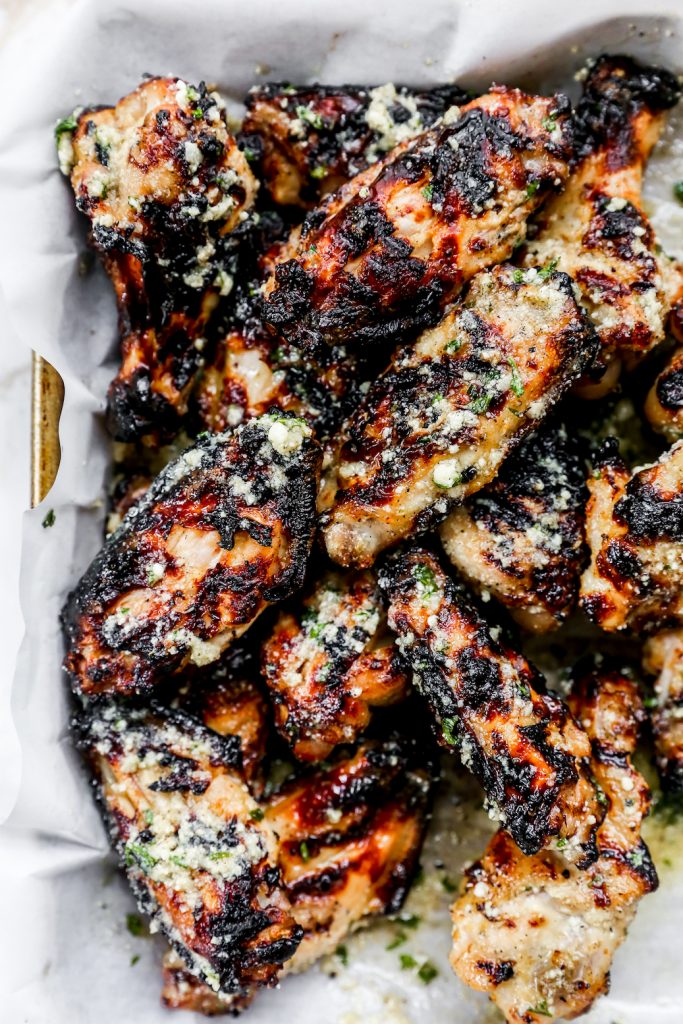 I have a fun summer chicken wing recipe to tell you about today!

They’re typically doused in buffalo sauce and dipped in blue cheese or ranch dressing. I also love mine with extra celery! And I love a lightly breaded chicken wing. They are absolutely one of my favorite fall treats! 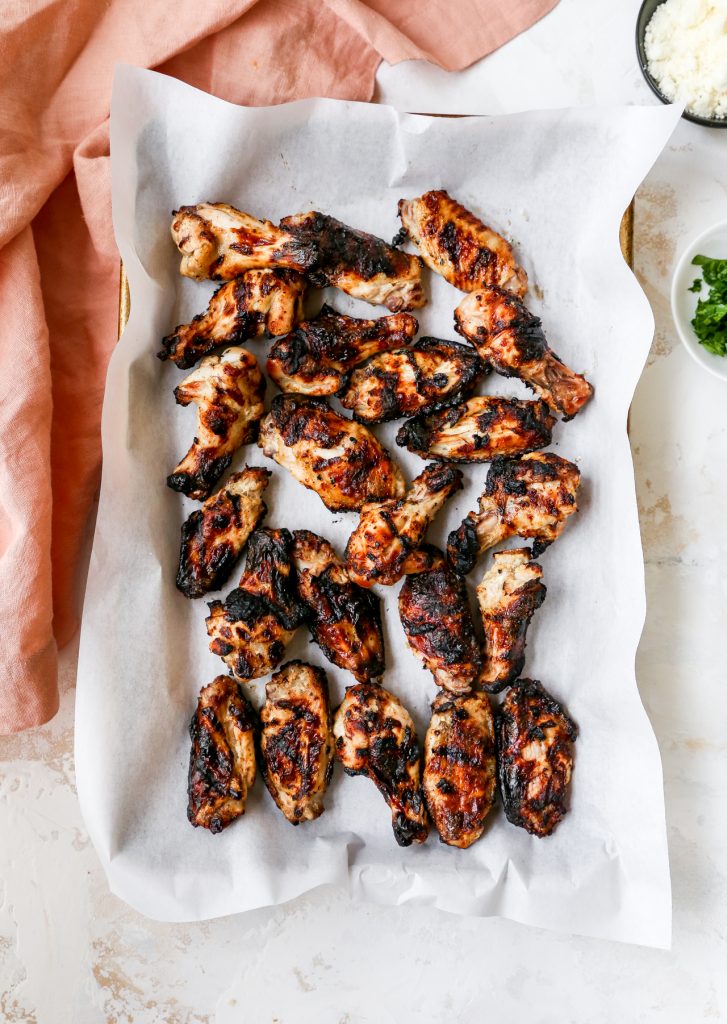 As much as I adore that classic buffalo wing, I wanted to explore some other options for serving wings, especially in the summer. Specifically, using the grill to cook them! No deep frying or cranking on a hot oven in the middle of summer.

This recipe is so fun and SO flavorful. It’s kinda crazy how such simple ingredients can add so much pizzazz to the humble chicken wing. It’s magic.

When we traveled to Italy a few summers ago, we started our trip in Rome. We were on a mission to eat the best cacio e pepe in Rome, since it’s one of the city’s signature dishes. We ordered it at every cafe and restaurant and devoured it happily every time. To be honest, I don’t think we had a BAD version at any of our stops. 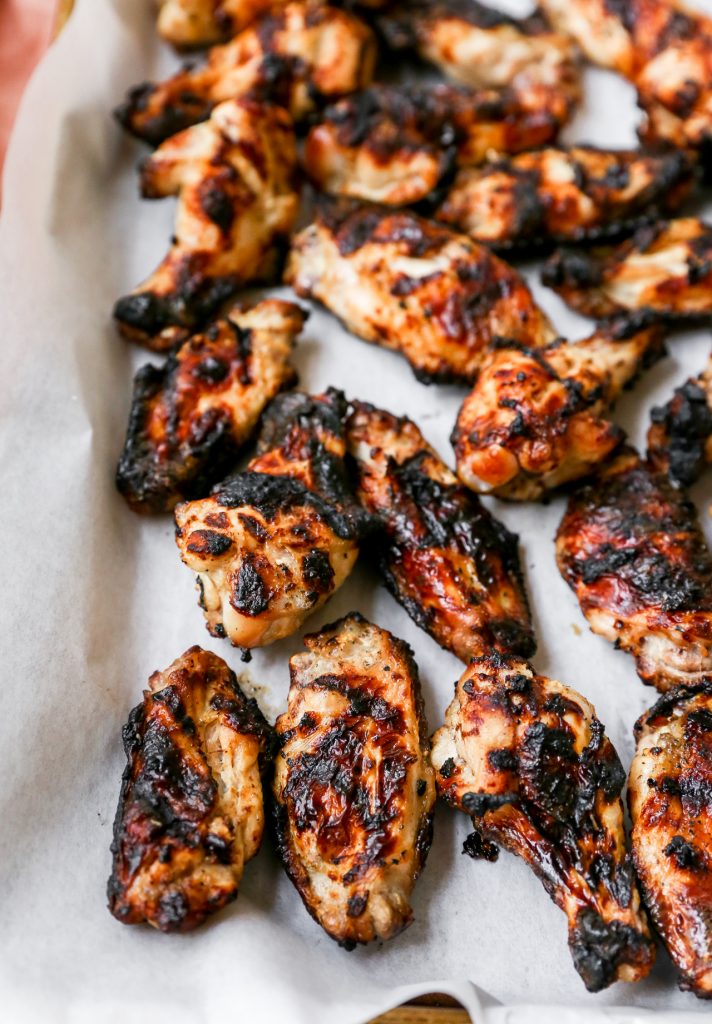 Cacio e pepe is one of the simplest ways to make a flavorful pasta dish. The main flavors are lots of freshly cracked black pepper and pecorino romano cheese (the cheese of Rome!). Pasta is cooked and then tossed with those ingredients, along with the magic of some pasta cooking water, and before you know it, a luxuriously creamy and flavorful sauce forms. It’s SO simple but unbelievably delish.

I wanted to take those same flavors and use them on a chicken wing. And I have to say, these wings came out even better than I was expecting. Dan and I devoured them. In record time. I’m sorta happy no one was watching.

The key to these wings is the brine! It adds significant time to the recipe, yes, but it also adds significant flavor and moisture to the wings! It’s so, so worth it. Brining the wings ahead of time basically guarantees that you can’t overcook them. OK, not really, but it does make it really hard to overcook them because it makes them INCREDIBLY juicy. Which is why it works so well for a super hot grill. 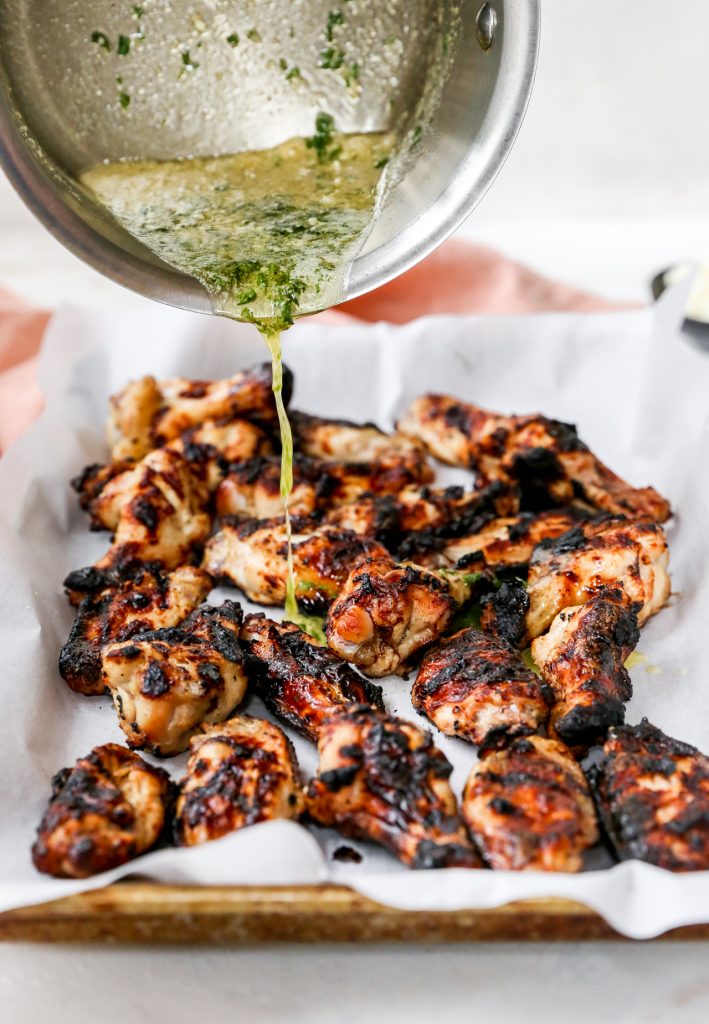 Once your wings are brined for a few hours, crank up your grill and create two zones of heat. This is easier than it sounds. If you’re using a gas grill, turn on half the burners and leave the other half off. The cooler side will still get hot and will serve as an indirect heat source. The side with the burners cranked on is your direct/super hot zone. Both serve an important purpose!

(And if you’re working with charcoal, I have instructions for that as well in the recipe below). 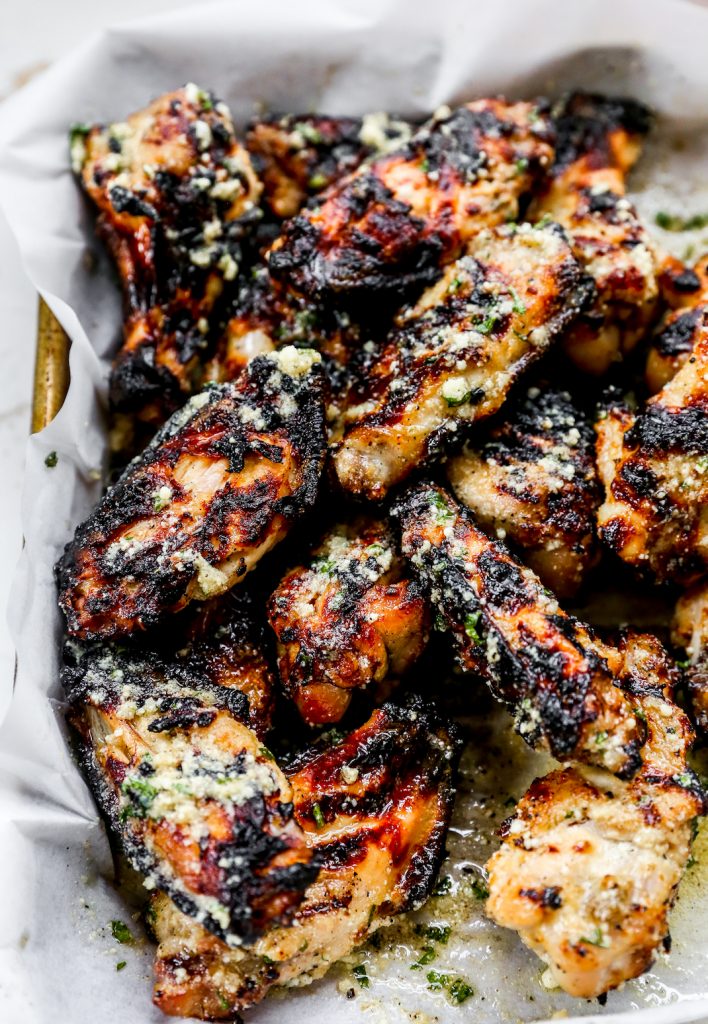 We are going to start by grilling the wings on the indirect/cooler side of the grill – this will essentially cook them through but without giving them much color on the outside. Once they’ve reached a proper internal temperature, shift them over to the direct/super hot side of the grill and let them crisp up for a couple minutes per side.

Probably easier than you thought, huh? 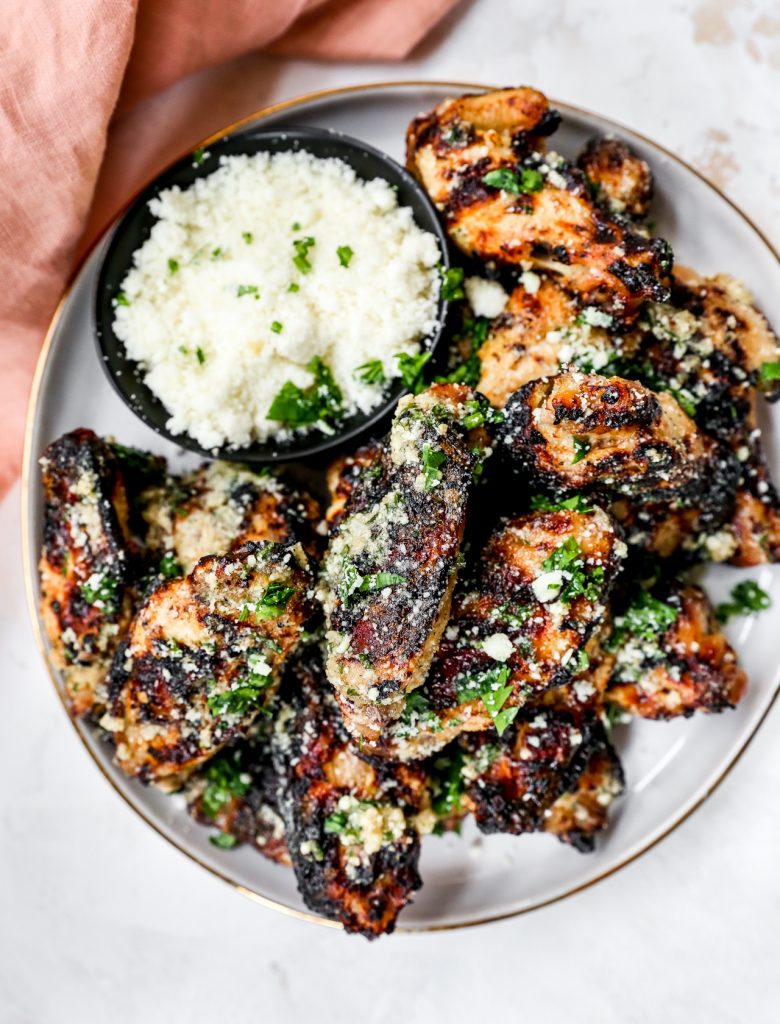 I am no grill aficionado, but even I can do this.

After the wings are cooked through and crisped up on the outside, we toss them in a simple but super flavorful sauce: melted butter, garlic, lots of black pepper, pecorino romano, and some fresh parsley. Essentially, the same things that make the famous pasta so delicious.

Toss the wings in the butter sauce, garnish with a little more cheese and parsley just before serving, and then DIG IN. Just be prepared: once you start, you won’t be able to stop. 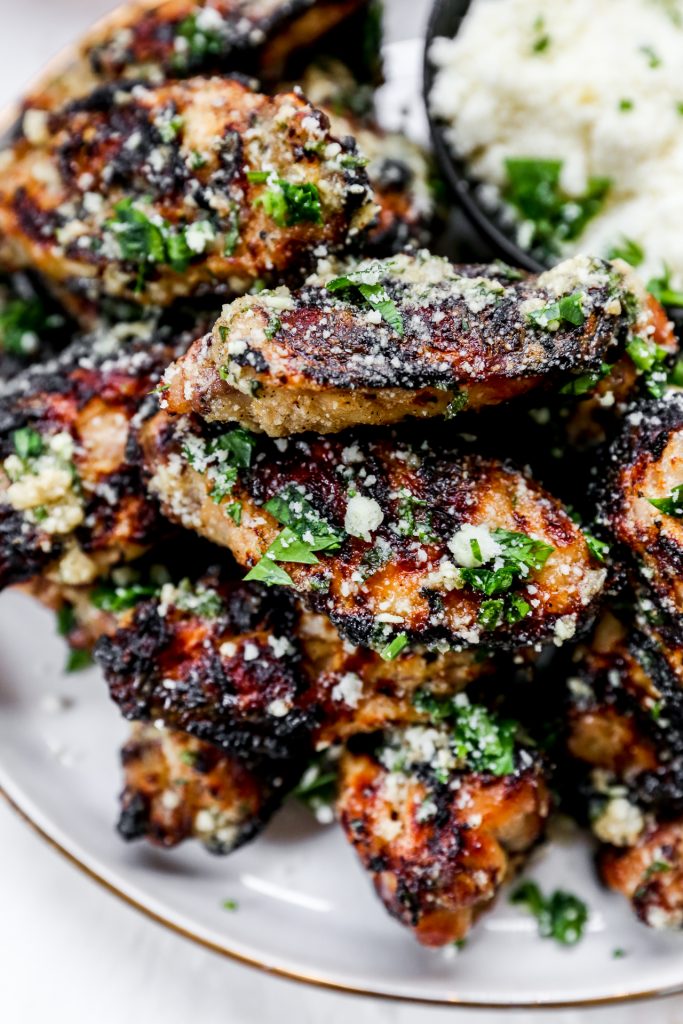 I can personally attest to this. Again, I am so relieved no one was watching.

These Grilled Cacio e Pepe Chicken Wings are an awesome summer alternative to the classic buffalo wing. No deep frying or hot oven required for these! Buttermilk brined, then grilled until crispy, and tossed in an incredible butter sauce reminiscent of the classic cacio e pepe pasta dish…these are addictingly delicious!

For Cooking and Serving:

For Cooking the Wings:

For Serving the Wings:

I highly recommend the brining step in this recipe. The wings easily dry out on the grill without it (which is why chicken wings are usually deep fried – keeps them moist). That said, the steps of the recipe are otherwise simple and straightforward; it just requires a little bit of extra time accommodation for the brining time! 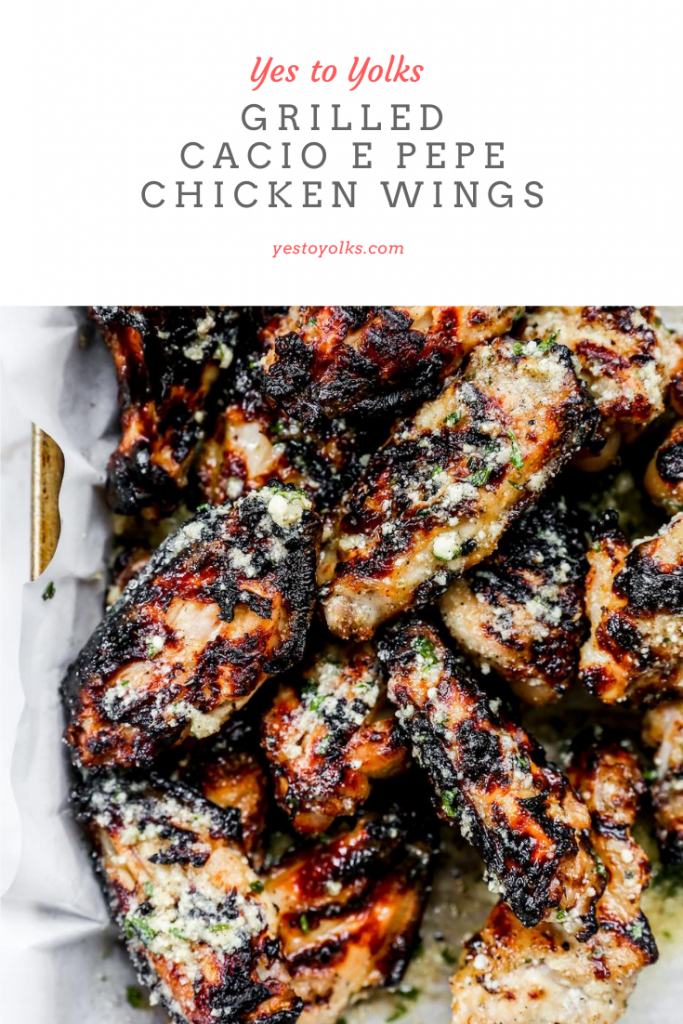