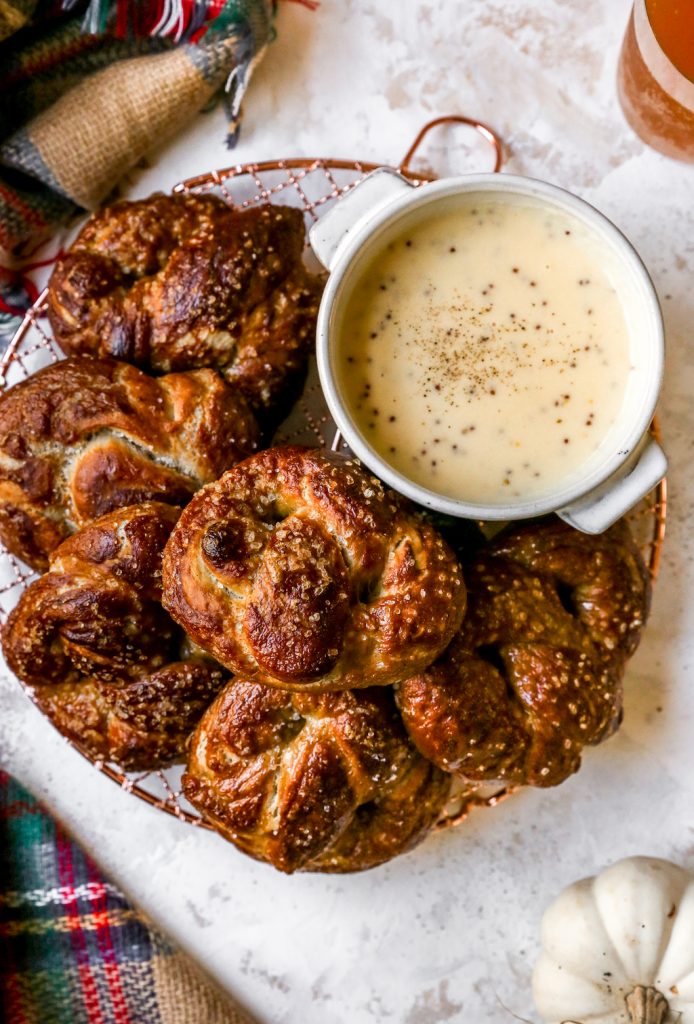 I have SUCH a yummy snack to tell you about today!

Homemade soft pretzels made with pumpkin beer and subtly spiced with the flavors of the season. 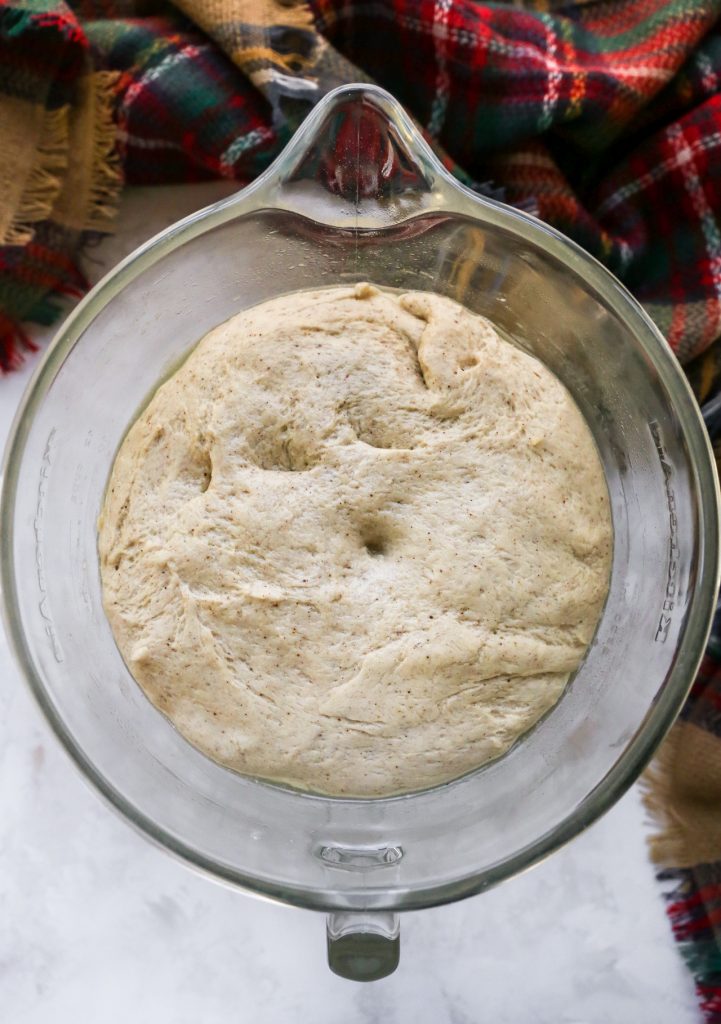 And if that wasn’t good enough, a beer-mustard-cheddar dipping situation to go alongside!

How much do you love me right now? I love me A LOT at this particular moment. 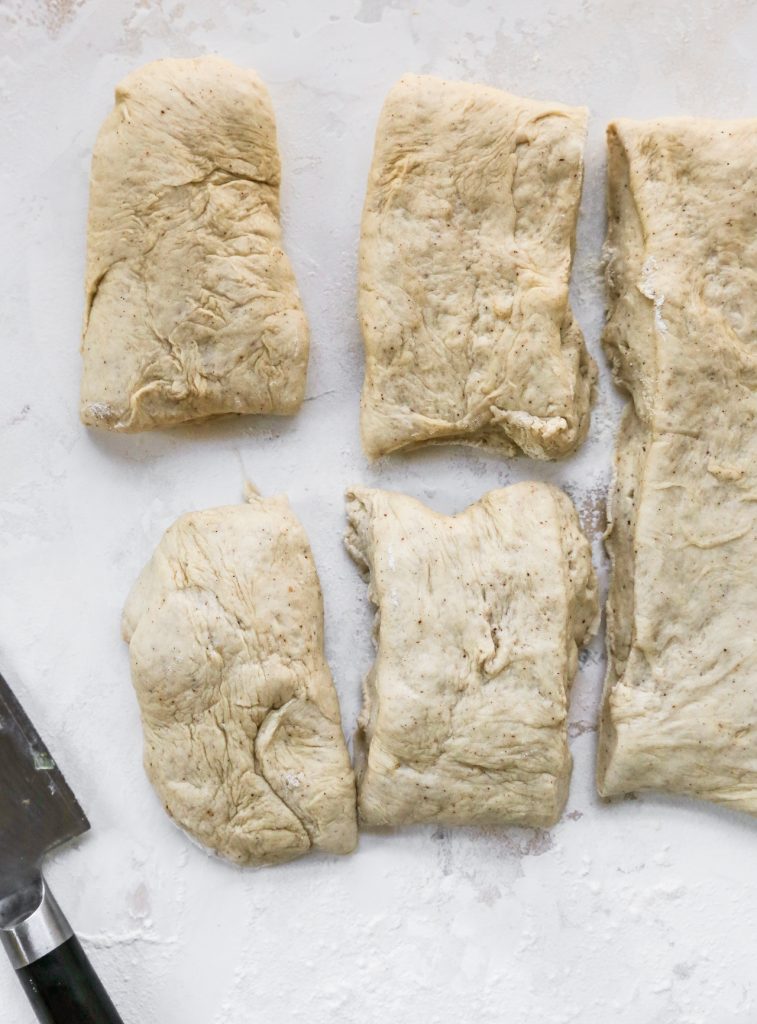 Soft pretzels have to be up there as one of my favorite carby treats. They have the best texture! Soft and fluffy on the inside with the best chew on the outside. Little crispy bite here and there. And everything is doused in salt! My favorite thing.

Homemade soft pretzels are a labor of love and my whole family adores them. Kieran gets especially excited about soft pretzels. Back when we were allowed to attend sporting events, we would take him to the Phillies games and he would always ask for a soft pretzel.

A little man after my own heart!

While soft pretzels at home take a little work and patience, they are always worth it. This particular version is made with a little something extra: warming fall spices and pumpkin ale! I add cinnamon, nutmeg, cloves, and allspice to the dough mix, and I cannot even tell you how amazing the combination smells. Especially once the pumpkin ale gets mixed in! So much flavor and aroma going on. 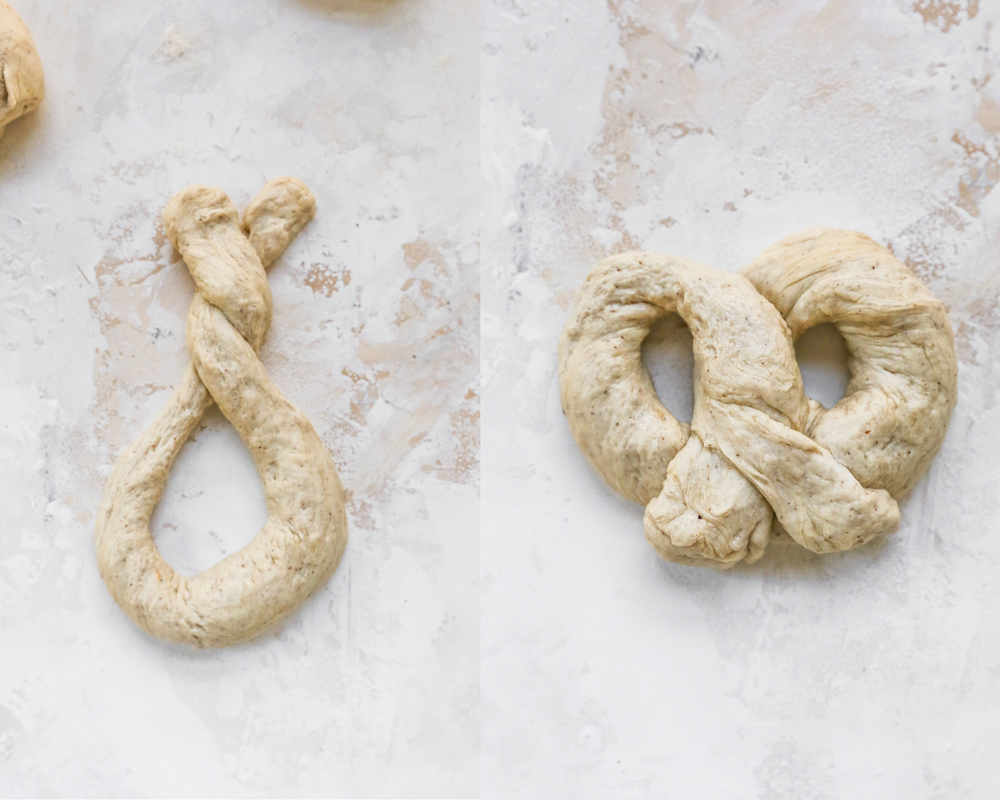 And yes, even though those are most of the spices found in the classic “pumpkin spice” spice mixes you find at the store, I can promise you this: they work in a savory application too! These pretzels are NOT another pumpkin spiced gimmick – the spices just add more flavor and pizzazz to the dough. These are definitely NOT a sweet pumpkin-y recipe.

Also, pizzazz? There’s a word I’ve used all of three times in my life. 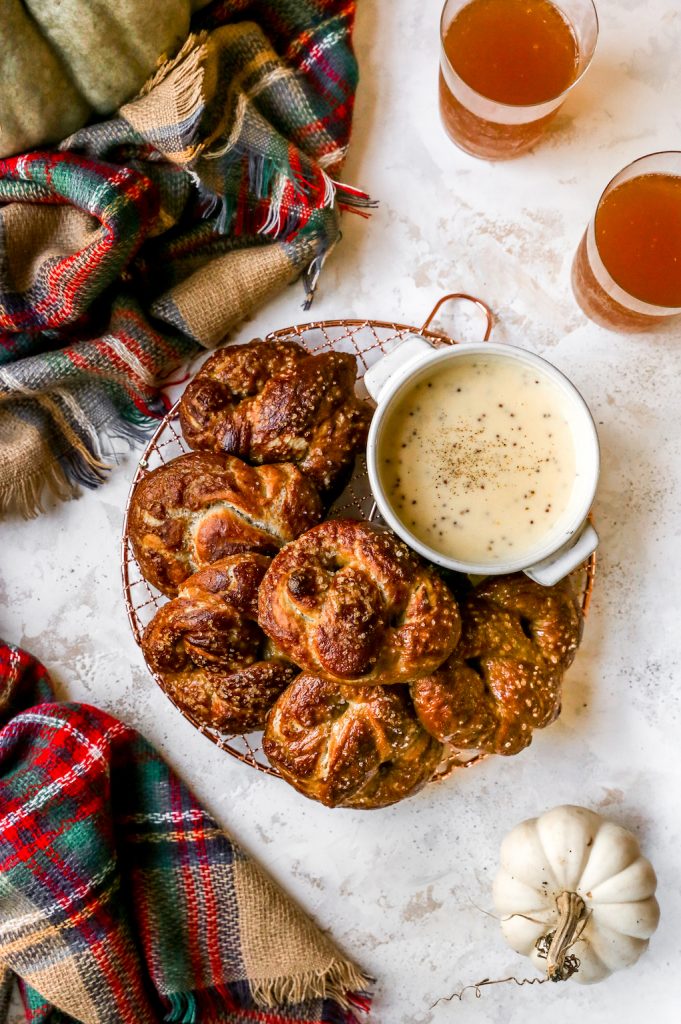 After the ingredients have a little time to get to know each other and have risen to form a fluffy and pillowy dough, it’s time to form the pretzels. In my humble opinion, this is the hardest part of making pretzels at home. Mine always come out looking a little…rustic, shall we say? Meaning, you can definitely tell mine are homemade. Because that’s how they look! 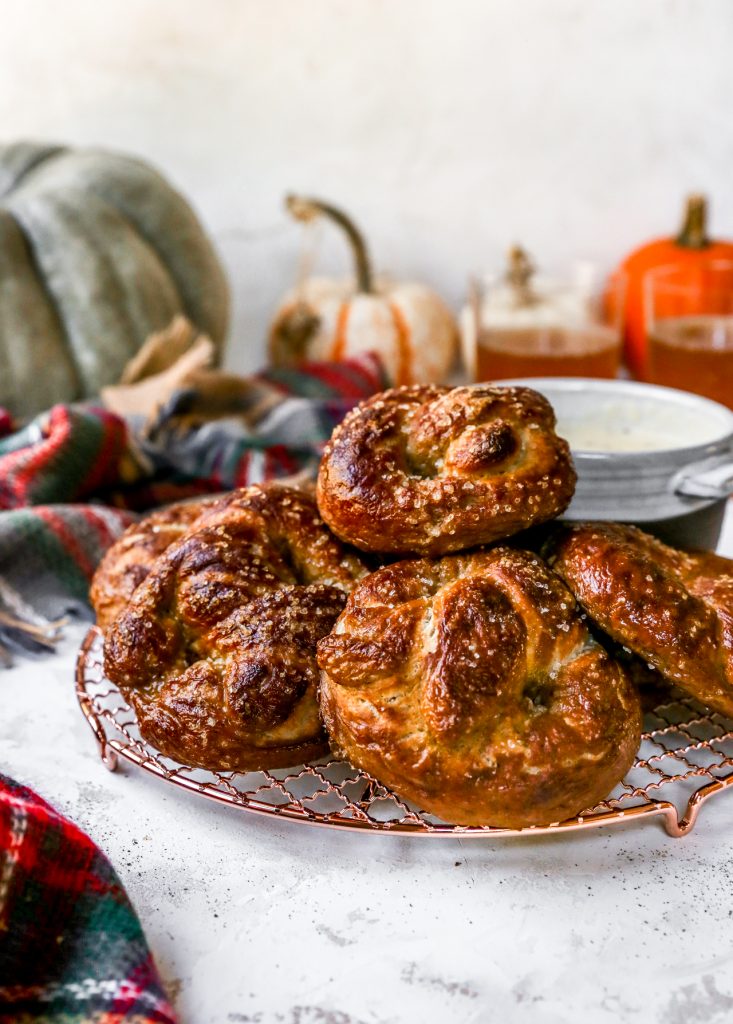 I’m OK with that, though. Homemade does not mean fussy or perfect – even though my type-A self strives toward those things constantly – as long as they taste good, nothing else matters!

So, we form the pretzels – you can make any shape you like – and then boil them on the stove in a mixture of water and baking soda. This step is what gives pretzels their unmistakable flavor and texture, and you absolutely cannot skip it. 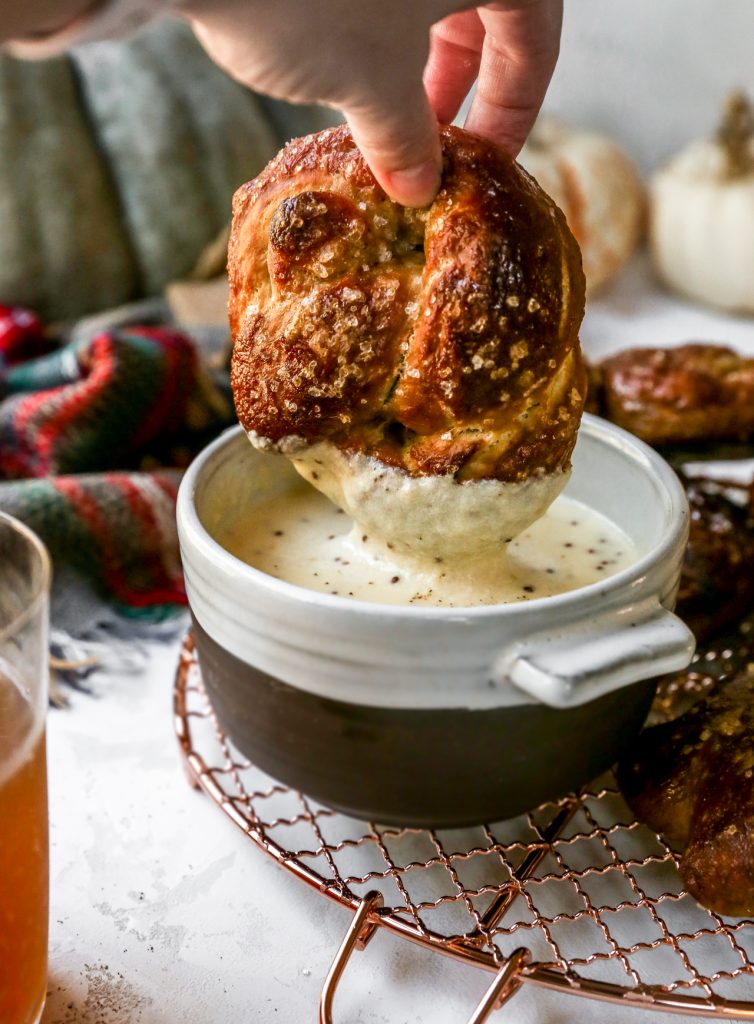 Once the pretzels are boiled, I place them on two large baking sheets lined with silicone baking mats. 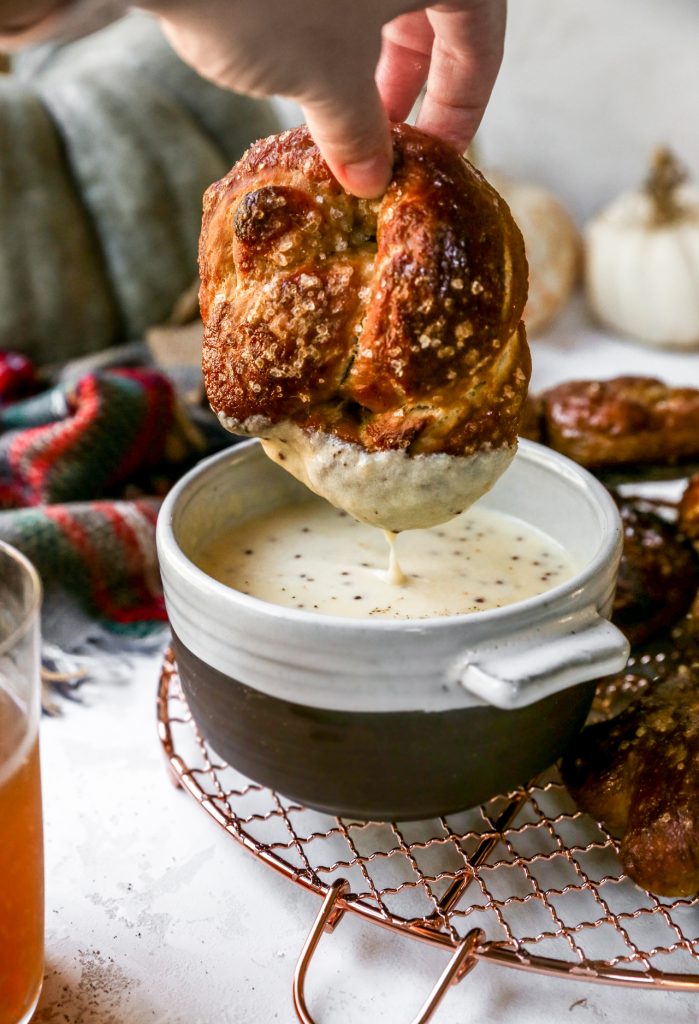 A word of advice: get yourself some silicone baking mats. I have tried making pretzels on greased baking sheets, on parchment paper, on greased parchment paper – every time, the pretzels stick horribly after baking. The silicone mats are the ONLY thing that have worked to get them off the baking sheet easily. I don’t advocate for unnecessary kitchen tools, but these are definitely worth it. NOTHING sticks to them. 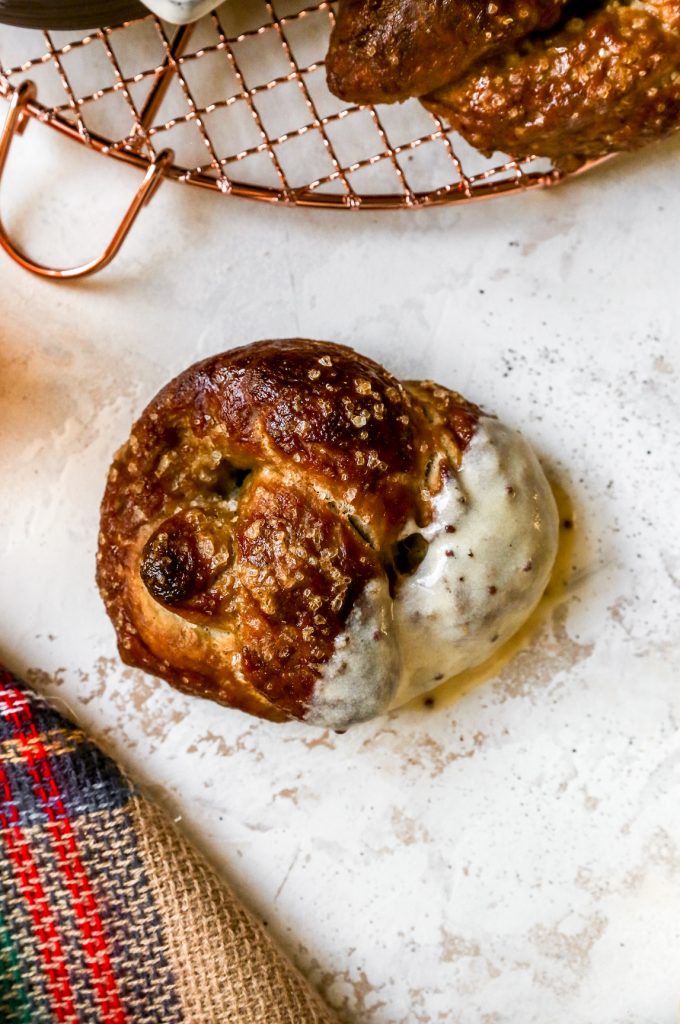 Once all the pretzels have been boiled, we douse them with salt and bake until crispy and deeply golden. 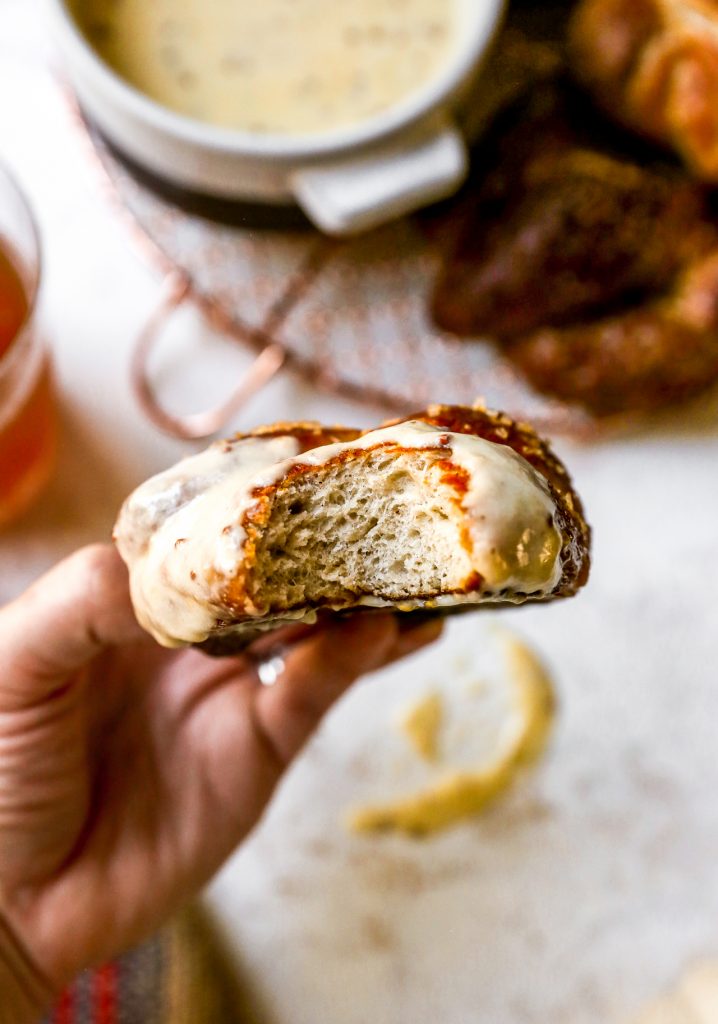 I like to make the cheese dipping sauce while the pretzels are baking. It’s a simple, straightforward cheddar cheese sauce, except it’s flavored with more pumpkin beer and some tangy whole grain mustard. Because what goes swimmingly with soft pretzels? Cheese! Beer! Mustard! It’s a winning combo, I promise you that. 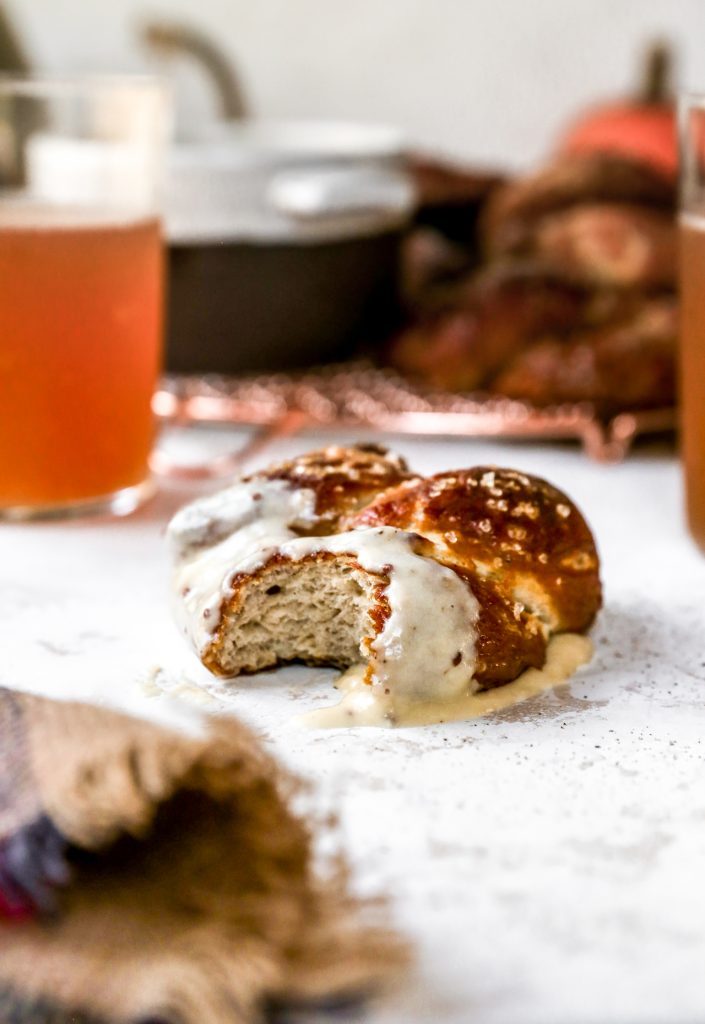 I beg you to serve the pretzels hot out of the oven with the gooey, super flavorful cheese sauce on the side. It is heaven on earth, I tell ya.

We were one happy family of pretzel lovers when these were ready to eat. And they disappeared in record time! 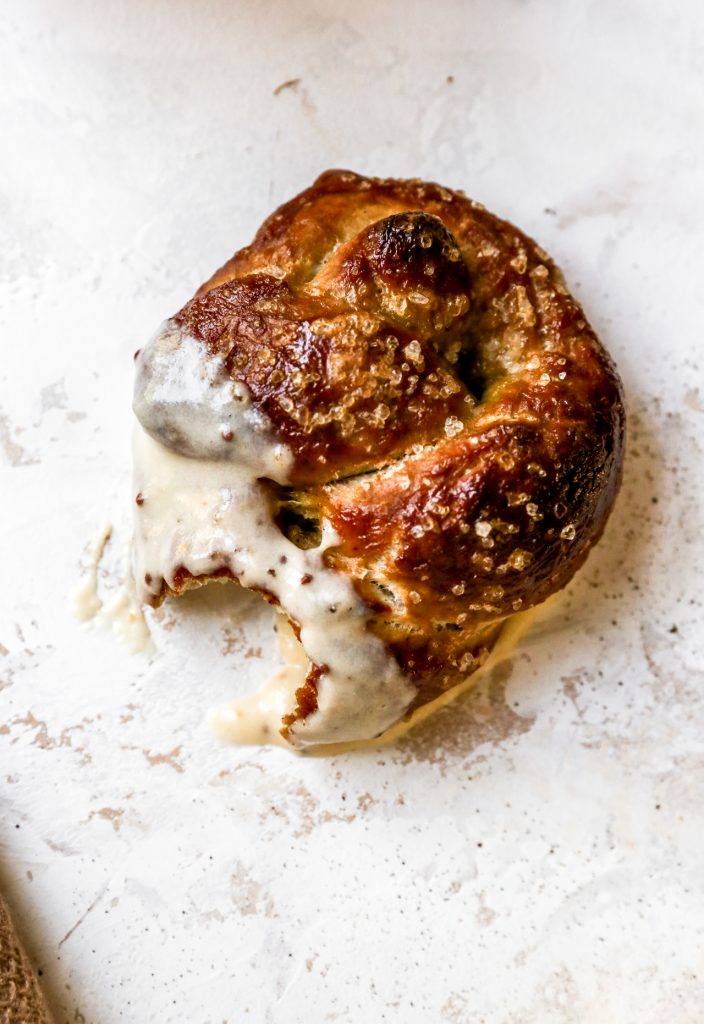 These Spiced Pumpkin Beer Soft Pretzels with Mustard Cheddar Fondue are a full of fall flavor and aroma! Made with pumpkin ale and warm spices and then dipped in the most deliciously decadent mustard cheddar beer fondue – these are a must make!

If you do not want to use beer, you can sub in 1 cup of warm water for the pretzel dough. Make the recipe as directed. For the cheese fondue, you can omit the beer and sub in another 1/2 cup of half-and-half or milk. 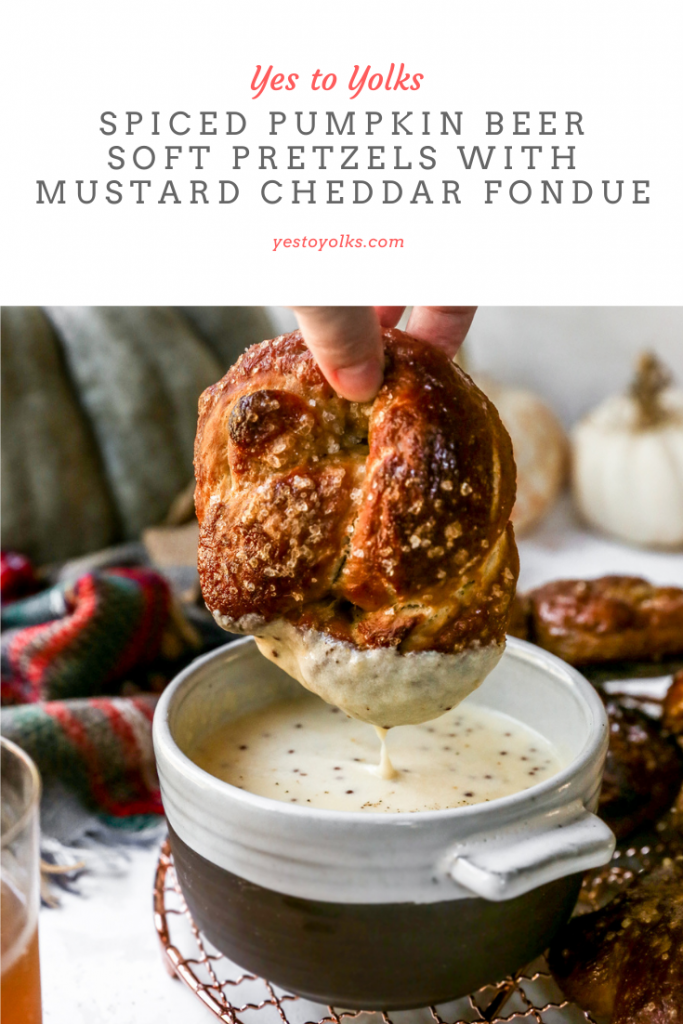