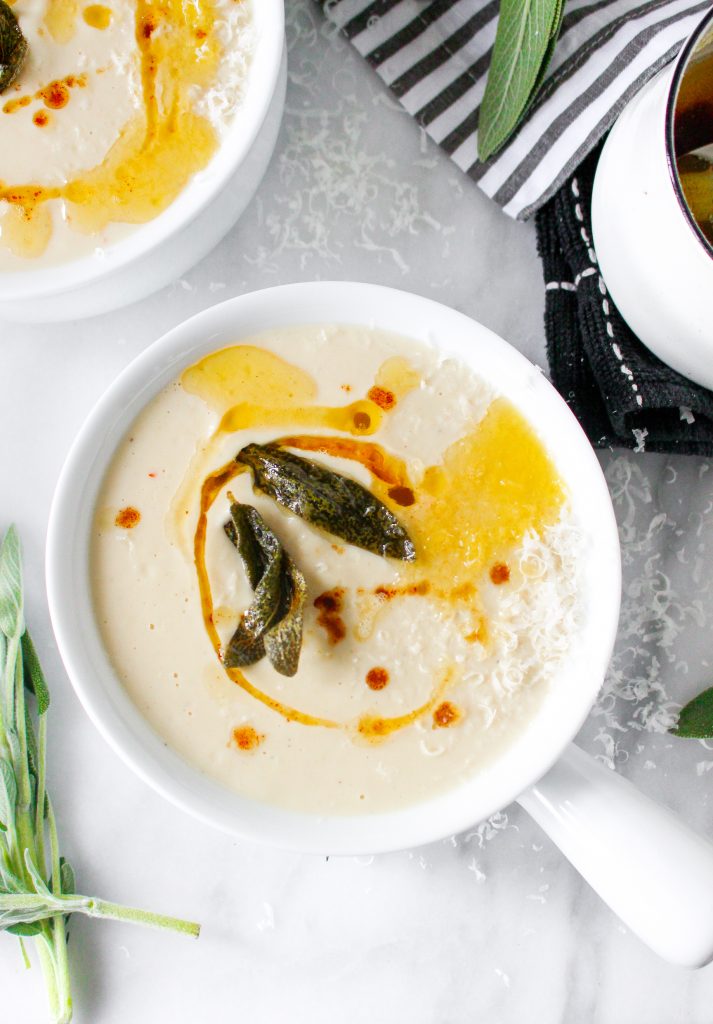 Hi, hi! Happy 2017 to you and yours! Here’s hoping for an amazing new year. 2016 was not my favorite year, but I have a lot to be grateful for. My healthy, happy little family. My job. The fact that my fridge and pantry are always overflowing with food. And this little blog space. Despite some not so great stuff taking place in the world, I am choosing to be as positive as I can. To be as grateful as I can. 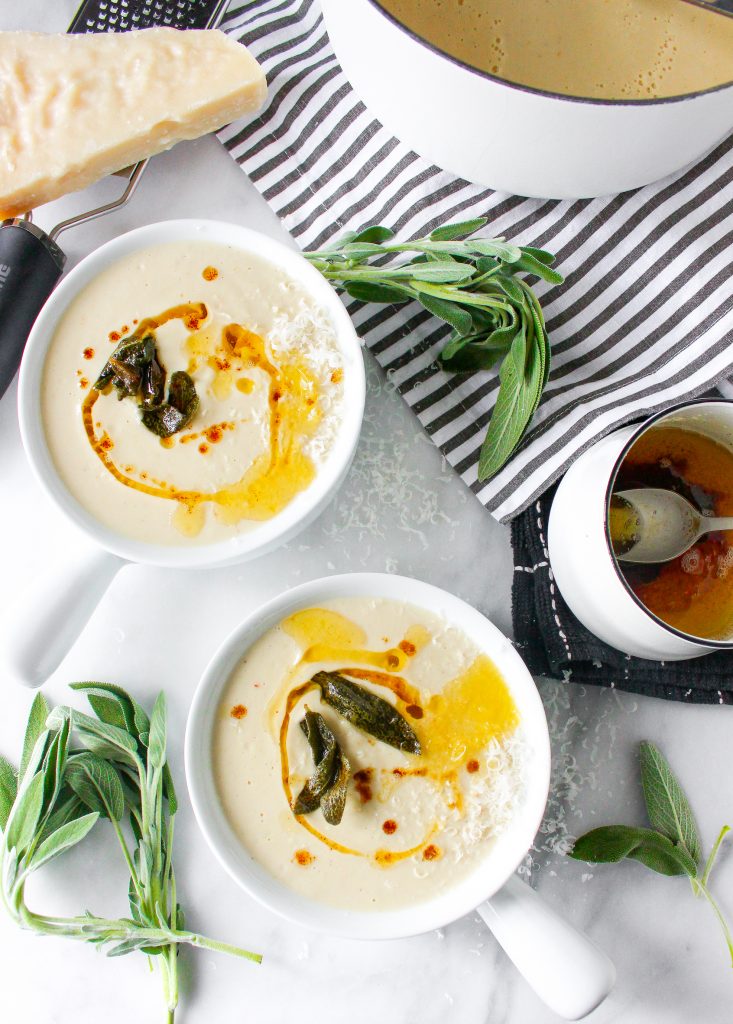 To kick off this new year, I made you all some soup! You really shouldn’t be surprised. Soup is my absolute favorite meal. Forever and always. A new year isn’t going to change that small fact. And this one is not only delicious and comforting, but it’s pretty healthy too! Perfect for all those resolutions we’re all making and hoping to keep, right? 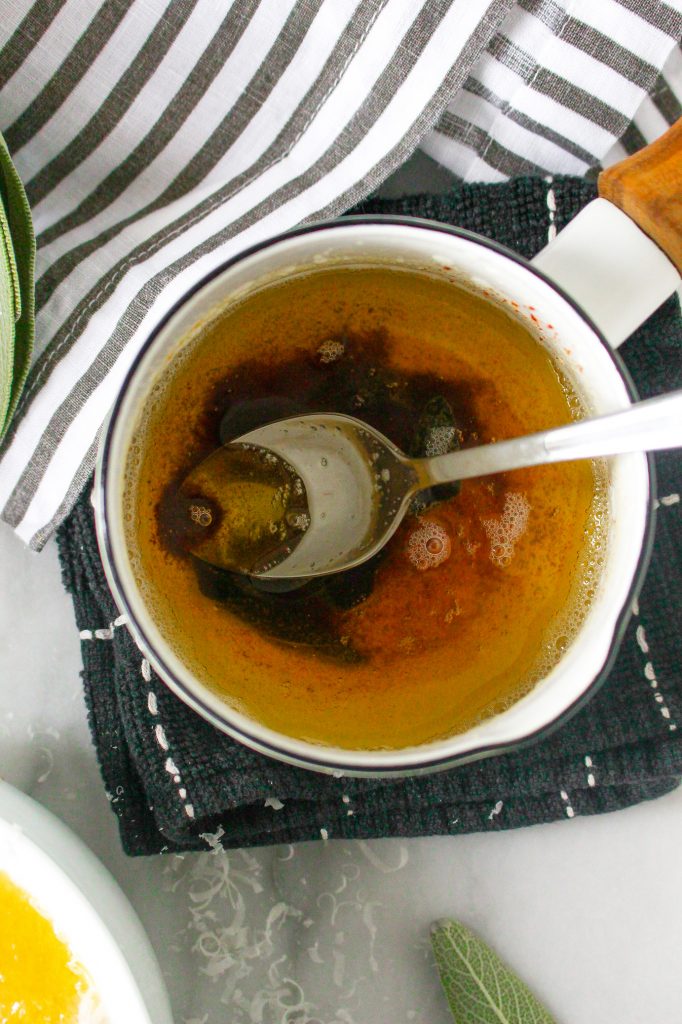 I did not grow up eating it. Nor did my husband. I suspect neither of our parents particularly cared for it, and thus, it wasn’t forced on us kids either. I think my lack of cauliflower exposure created an unconscious aversion to it. I didn’t know for sure that I didn’t like it, but it was one of those veggies I felt…suspicious of. Know what I mean?

For years, I’d pass by the cauliflower in the produce section without a second glance. It wasn’t something I considered picking up…like, ever. Who cared about cauliflower?! Well. Things have certainly changed in that regard. People are losing it over cauliflower. It’s the new kale, I swear. Remember back in 2012 how everyone was putting kale in EVERYTHING. Well, in 2016 (and now 2017) people are doing the same with cauliflower. It’s in pizza crust. It’s a low-carb rice substitute. It’s spiced and roasted whole. It’s in sauces. It’s in salads. It’s in EVERYTHING. It is the en vogue veggie for sure. 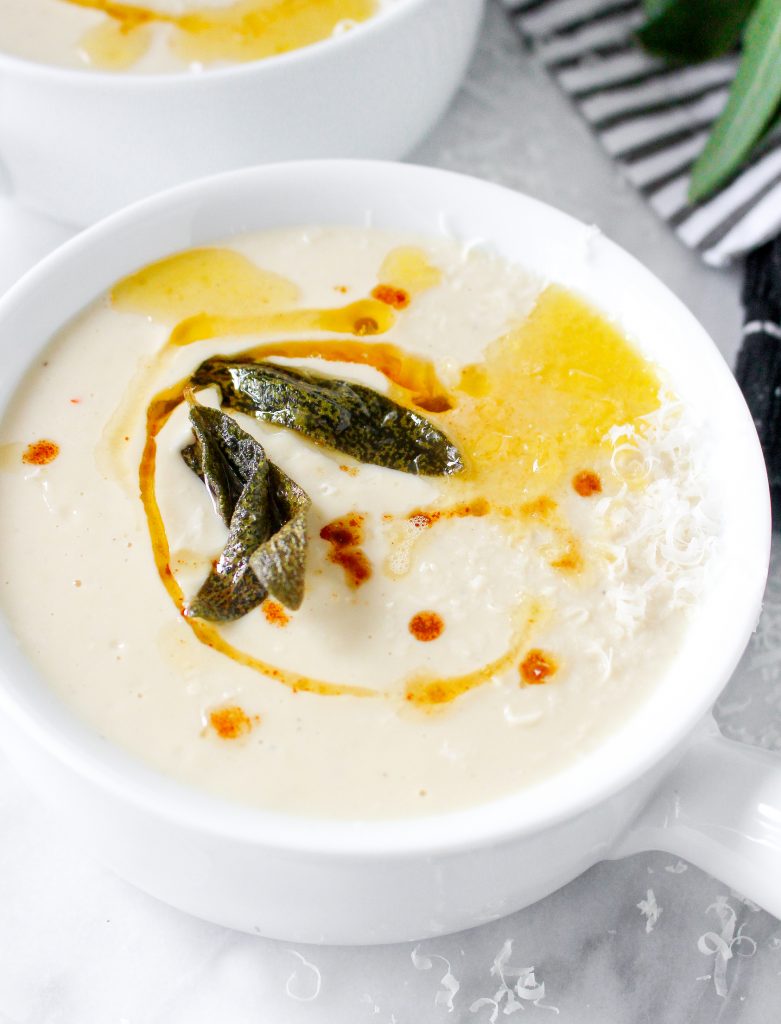 While I’m late to the party, I have to say I am a cauliflower convert. It’s all about how you cook it. Simply roasted cauliflower is my absolute fave way to enjoy it. It caramelizes beautifully and takes on a lovely charred flavor once it’s been doused in olive oil and plenty of coarse salt. It is the perfect side to just about anything.

And now, I’m putting it in soup. This soup is surprisingly filling. It has some spice and some love but the base is mostly cauliflower, creamy cannellini beans, and stock. Oh! And I added in a parmesan cheese rind for some more flavor, and I’m so glad I did. Parmesan cheese rinds should be hoarded and kept in your freezer at all times. I always have a few in the freezer for soups and sauces. It adds a touch of cheesy saltiness to anything and everything you simmer it with. It totally “makes” homemade marinara, by the way. 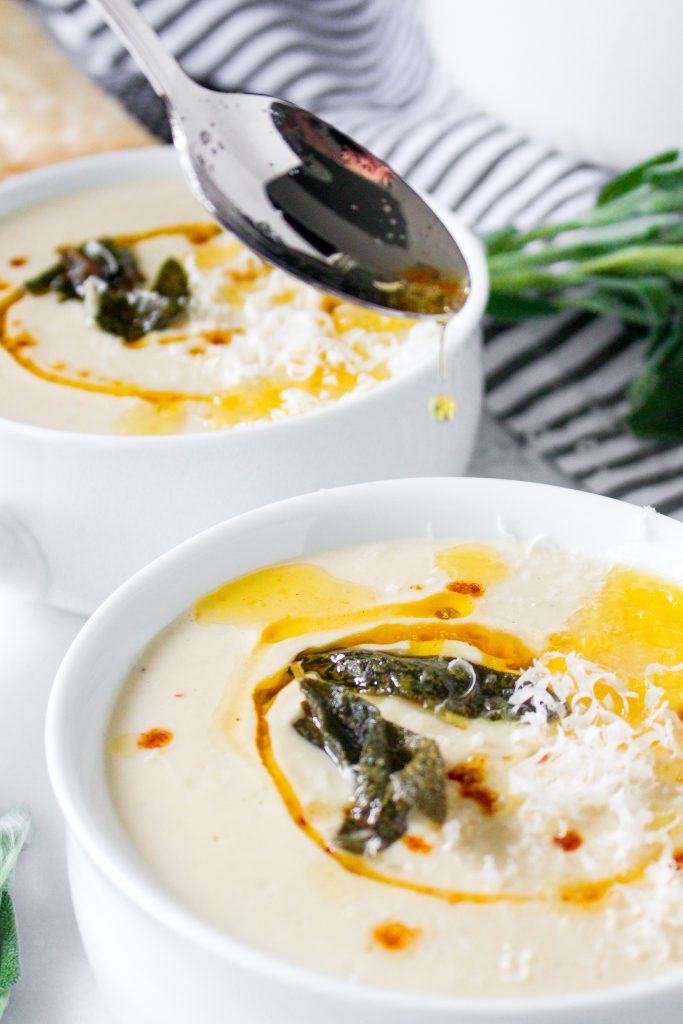 There also are hints of sage and cumin in this soup for added warmth and a teeeeensy bit of half-and-half for some creamy indulgence. Not too much, though! Just enough to make your tastebuds really happy.

Speaking of that, I also made a browned butter to drizzle over this beautiful soup. I took some fresh sage leaves and threw them in to the brown butter to crisp them up and to infuse the butter itself with loads of sage flavor. It is the perfect accompaniment to the otherwise veggie-conscious soup. It balances things out, shall we say. Makes you want to come back for more. 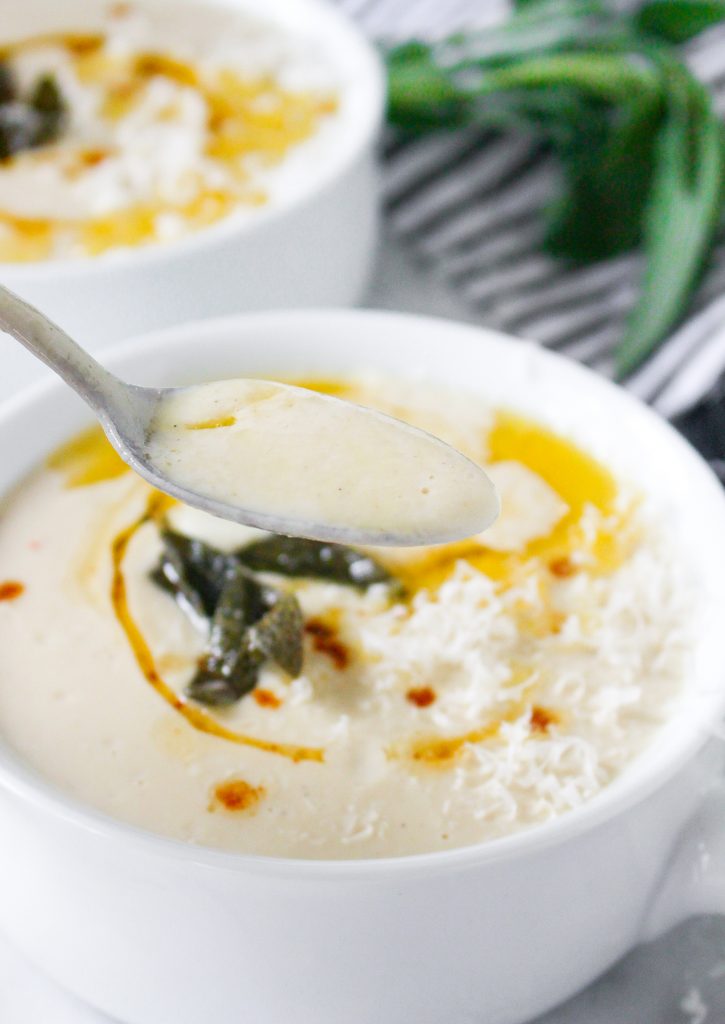 And there ain’t nothing wrong with that.

Bring on 2017! With meals like this one, I feel very well equipped to take on the new year and the challenges I’ve outlined for myself. We have so much to be thankful for. Let’s pay it forward! With soup! And browned butter! 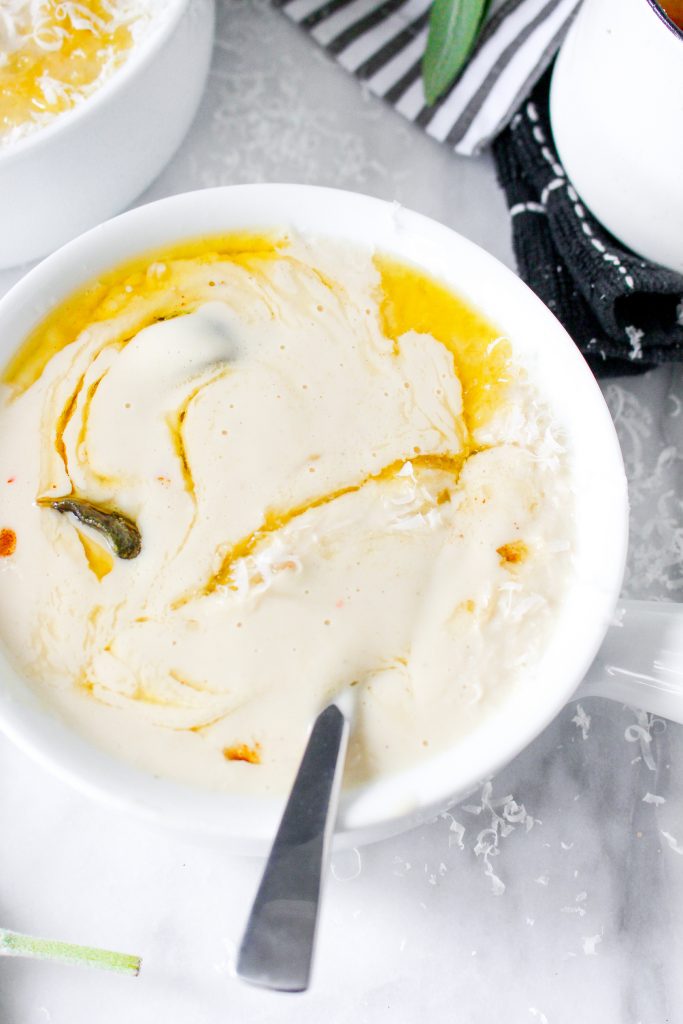