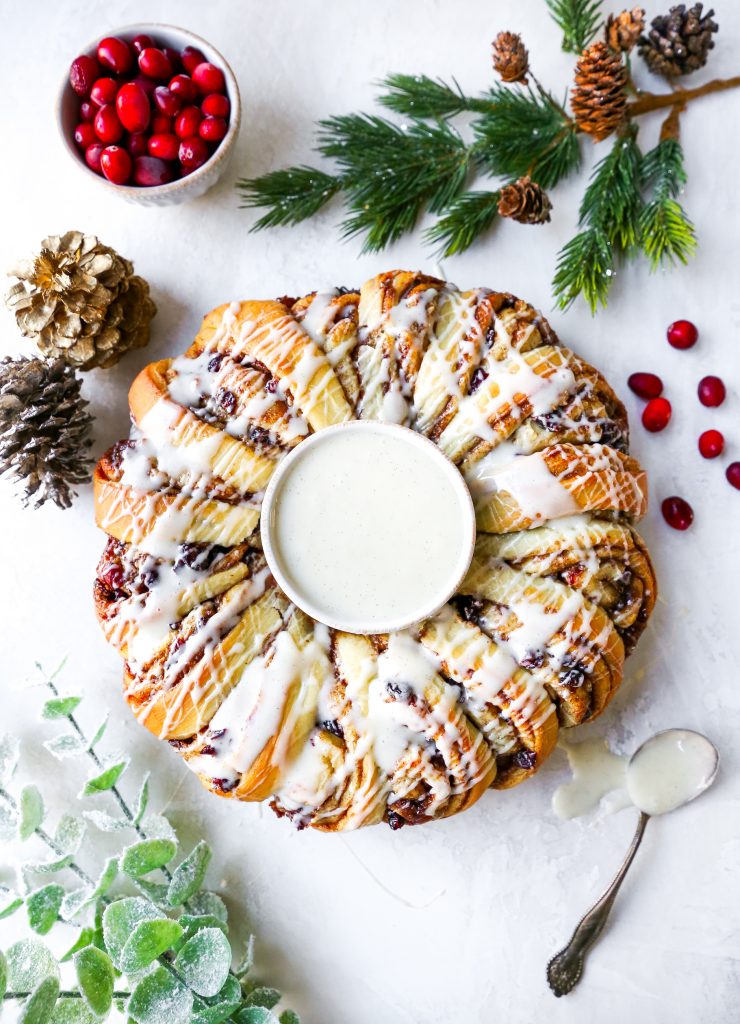 I have your Christmas morning breakfast covered!

This is the last baked good I will share for a long while. Promise. My site has been flooded with all sweet baked treats lately, and just know that some lighter, more normal, “everyday” food is coming soon. Our jeans are already thanking me! 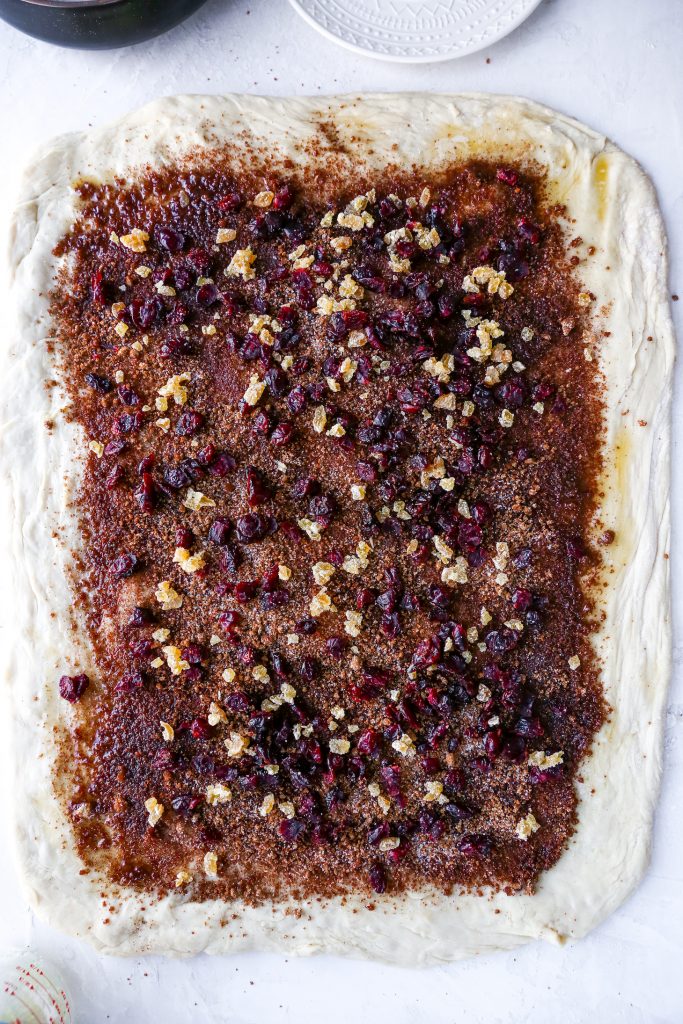 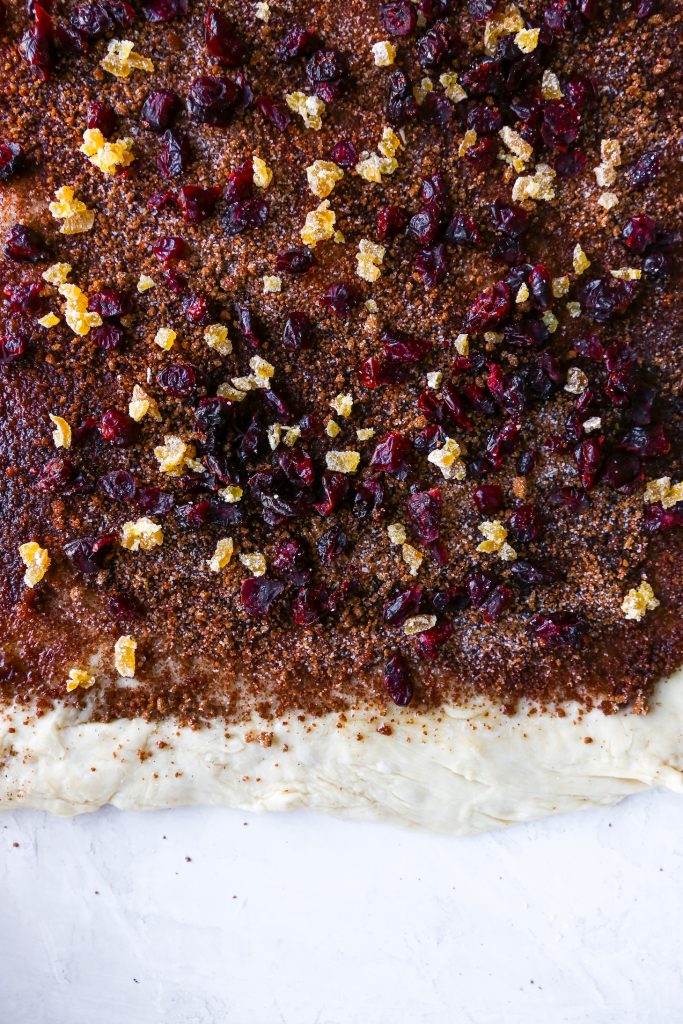 Yeah, all of that is happening here today. And I’m not mad about it. 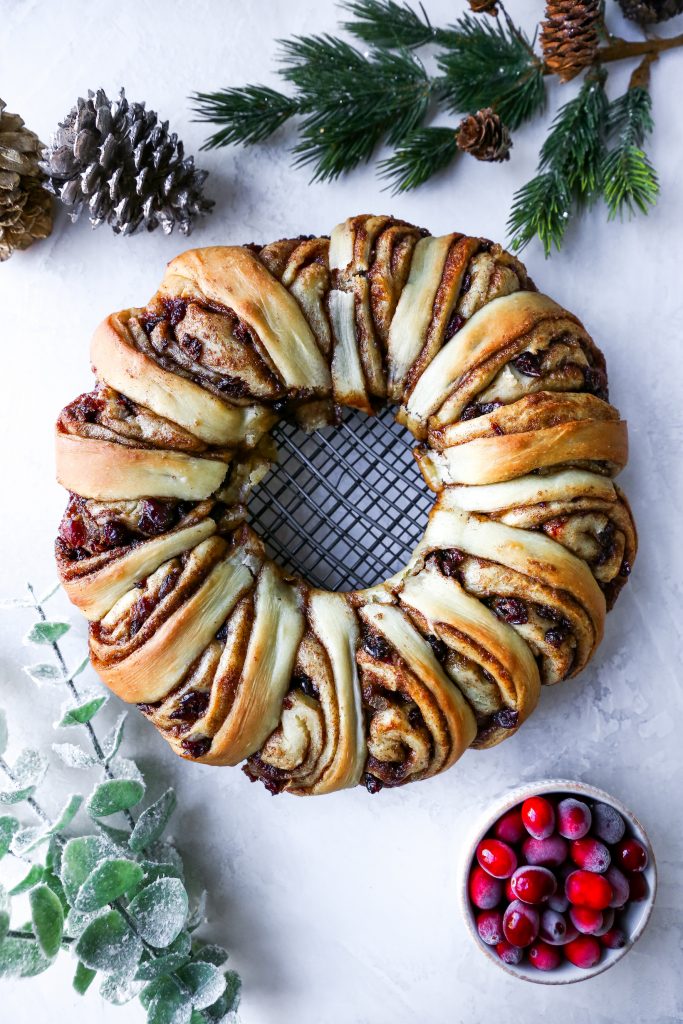 Cinnamon rolls are a bit of a tradition on Christmas morning. Or at least they have been since Dan and I got married. Growing up, my mom would always serve a fresh cranberry-nut bread (to die for!) and clementines for Christmas morning breakfast. When we were old enough, we had mimosas alongside our coffee mugs. She always kept it simple, and it was perfect. 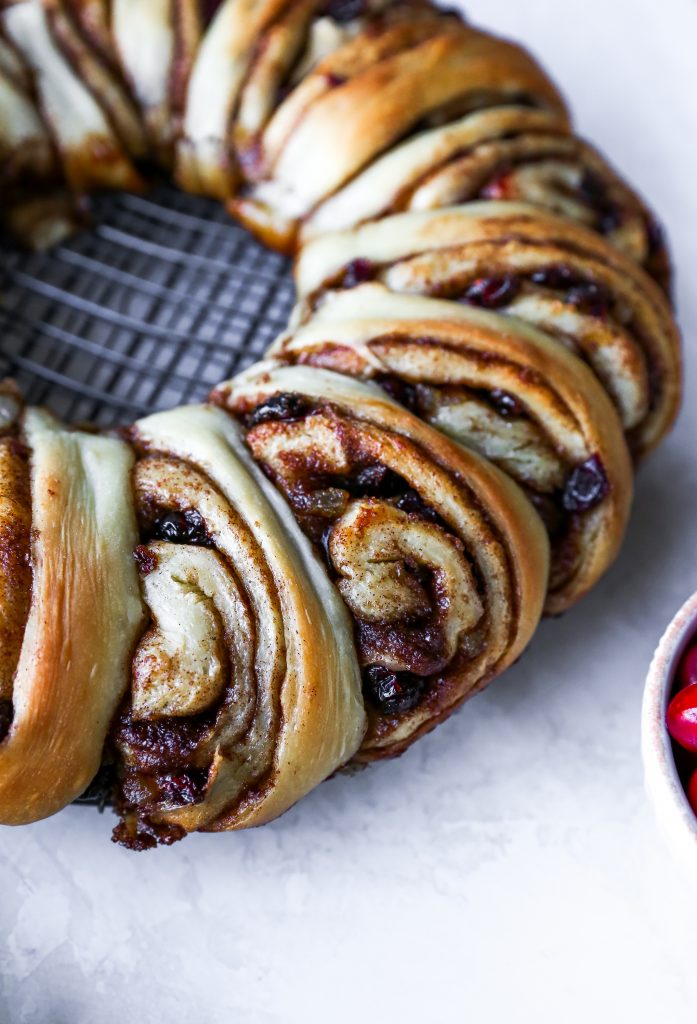 Me being my somewhat overachiever self had to flip that on its head when I started my own Christmas morning traditions. Enter the cinnamon roll.

Cinnamon rolls are actually NOT hard to make, and the ingredients are probably things that you already have on hand. They just take some rising time, which is not ideal on Christmas morning (keep reading – I’ve got this covered). Overall, though, if you haven’t made them before, they’re probably easier than you think. 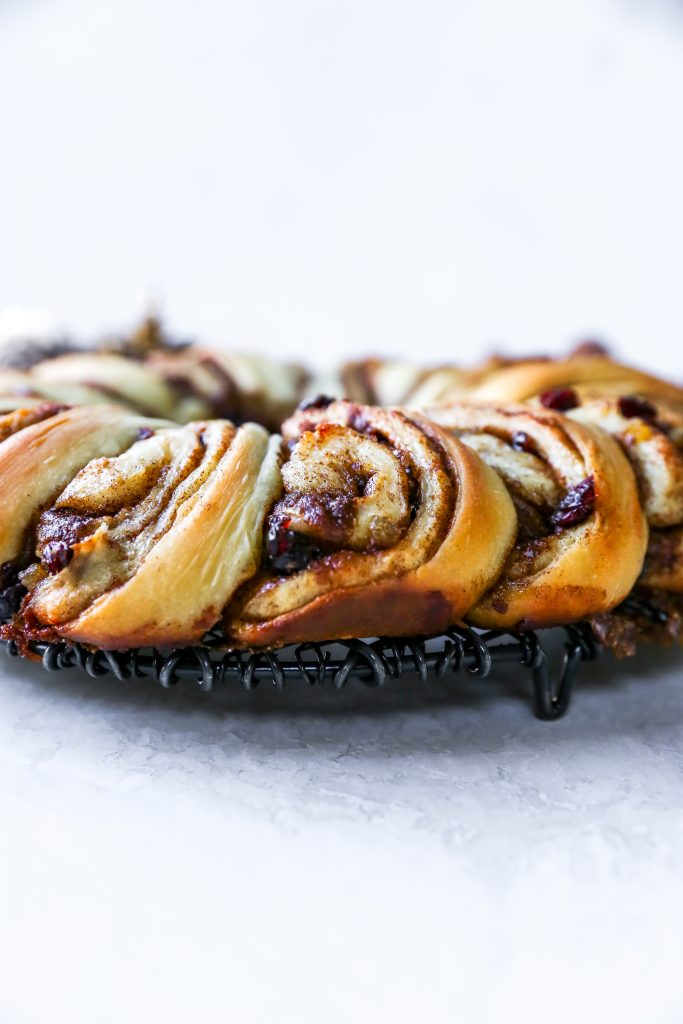 To avoid too much effort on Christmas morning (because, let’s face it, we’re all about the coffee, PJs, and presents at my house), I make my dough the night before and pop it in the fridge. I also make the filling (saving the melted butter for the morning), so everything comes together quickly and easily on the big day. It has worked like a charm for several years now, and I don’t see the tradition changing anytime soon. 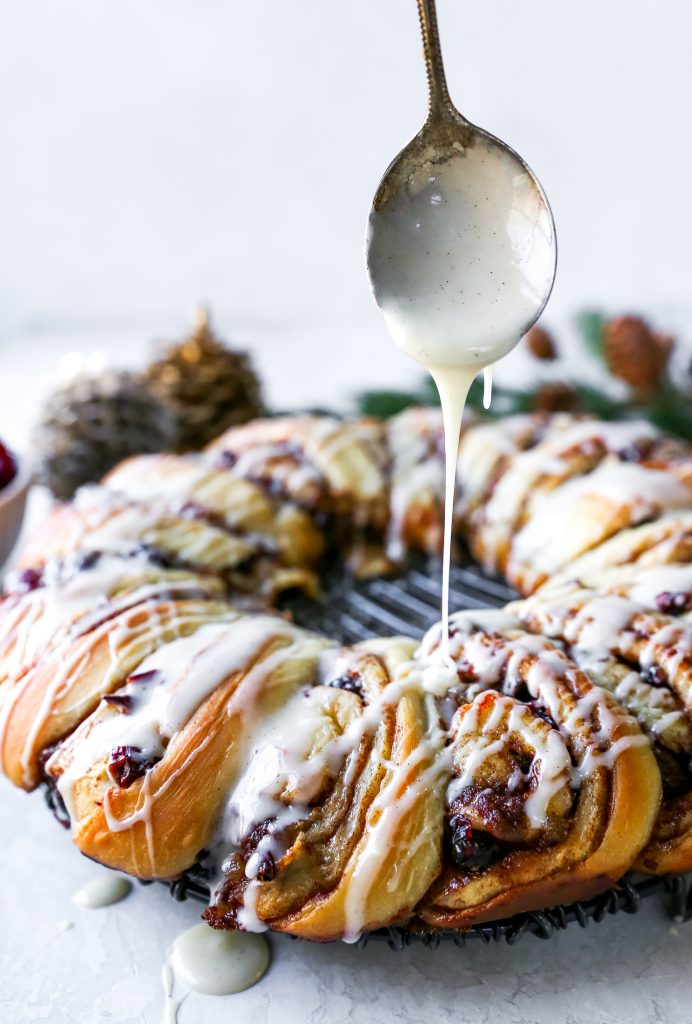 One thing that DOES change every year are the types or flavors of cinnamon rolls I make. Last year, I made these chocolate peanut butter rolls (a house favorite). The year before that, I did just basic cinnamon with cream cheese frosting. It really depends on my mood, and if anyone is going to be at our house on Christmas morning (besides us, of course). 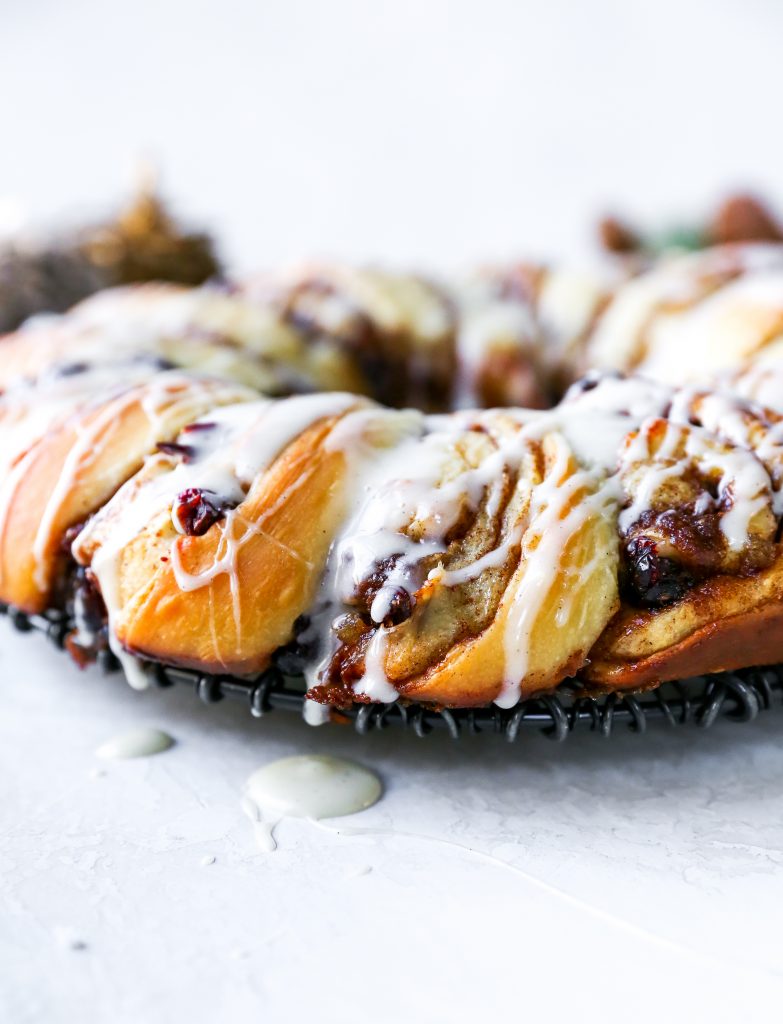 And this year, we’re taking that basic cinnamon rolls idea and adding in some spicy ginger and dried cranberries. Oh, and let’s not forget the bourbon in the glaze. Because that stuff is drinkable (both the bourbon and the glaze!). 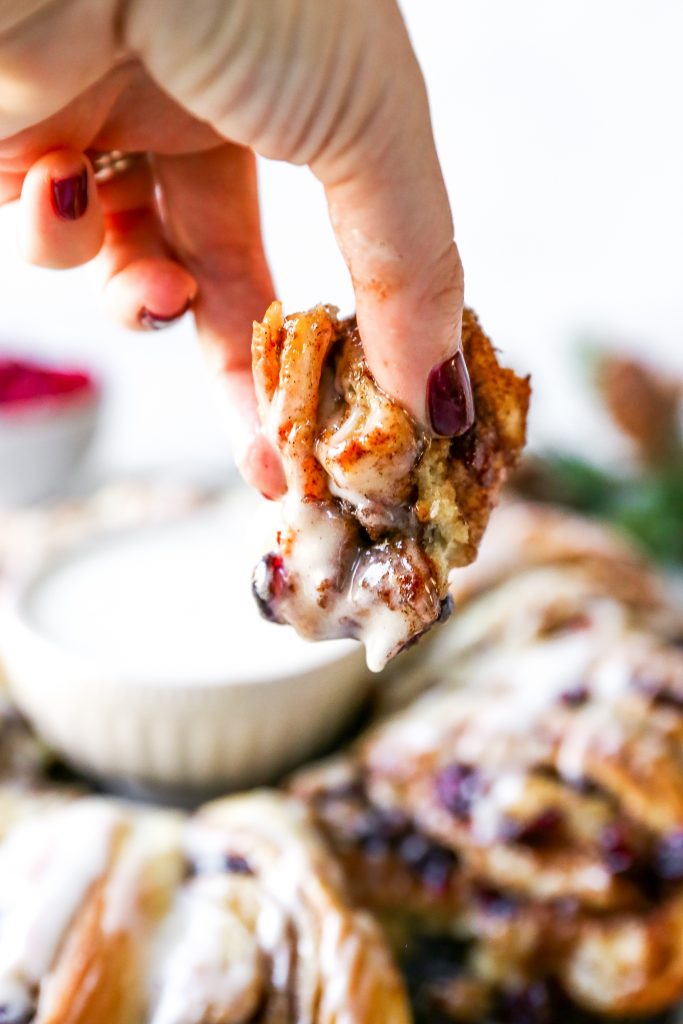 The flavors and textures of these cinnamon rolls are fantastic. So, so good. I love the spiciness that ginger adds and the dried cranberries get plump and soft but still have a wonderful chew. All of this is surrounded in a blanket of spiced sugar butter (um, yes please) and the fluffiest damn cinnamon roll dough of all time. 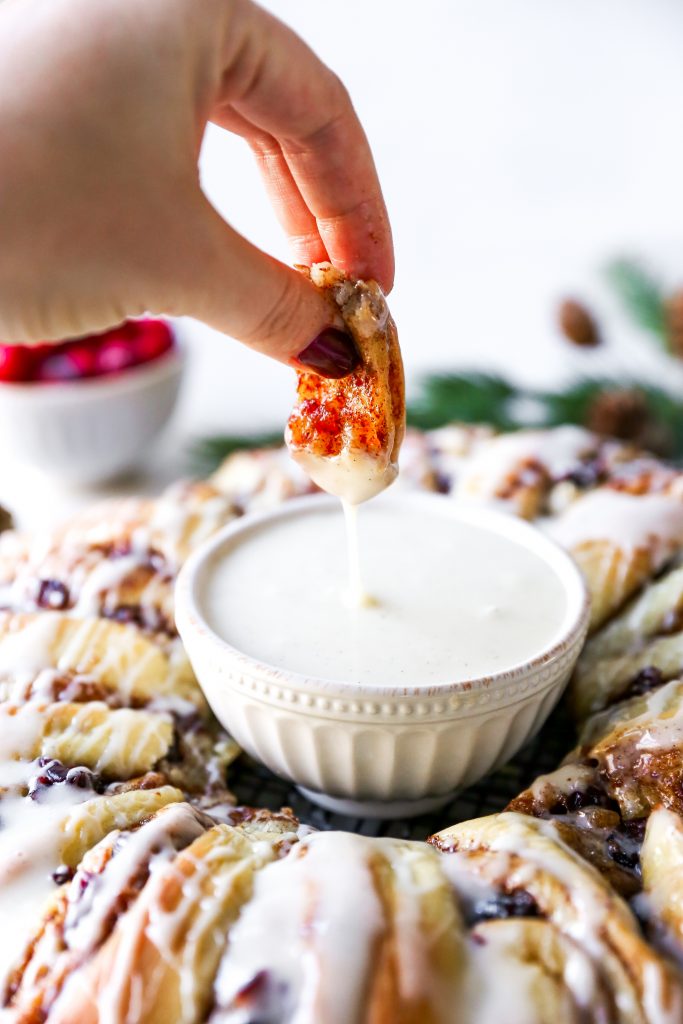 I decided to make these festive by forming them into a wreath shape and serving them like one big pastry, but you can definitely cut these up and bake them like regular cinnamon rolls, if that’s your preference! I guarantee you will love them either way. The wreath method if not only a super fun and pretty way to serve these rolls, but it also makes for a fun eating experience. It’s kind of like a cinnamon roll pull-apart bread! You grab a hunk of warm cinnamon roll off the wreath and dunk it in the bowl of leftover glaze and GO TO TOWN. 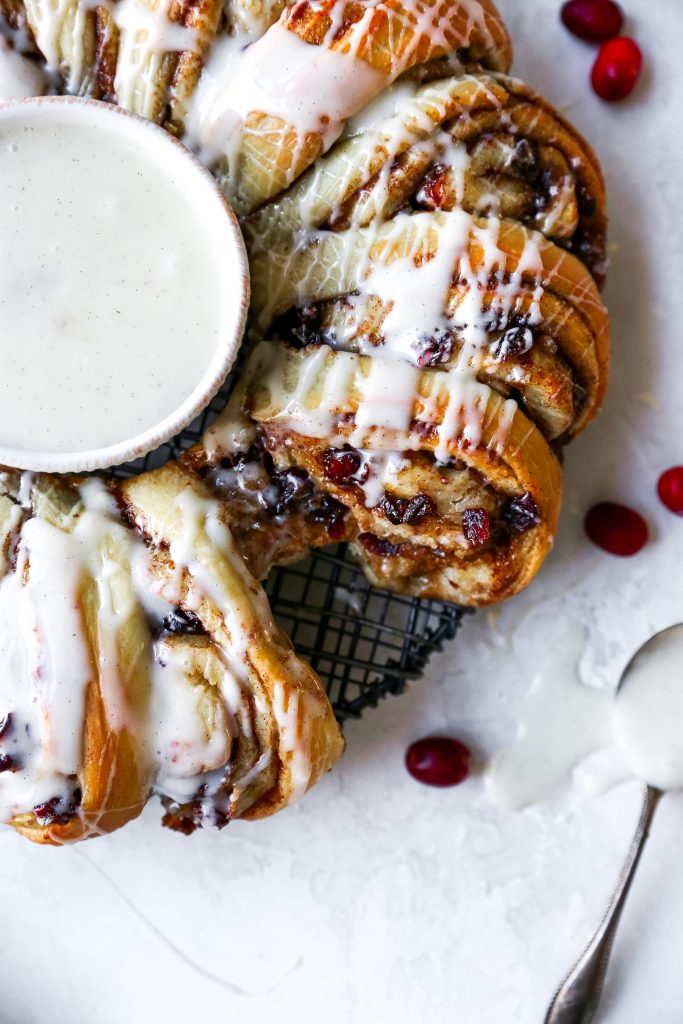 Not that I’m speaking from experience or anything. 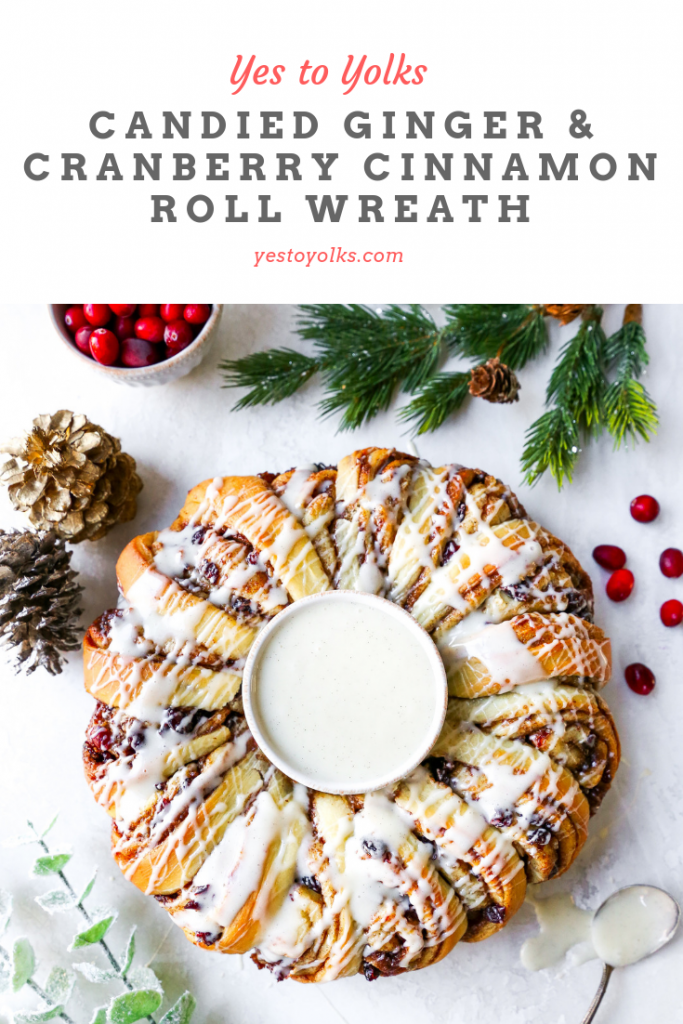