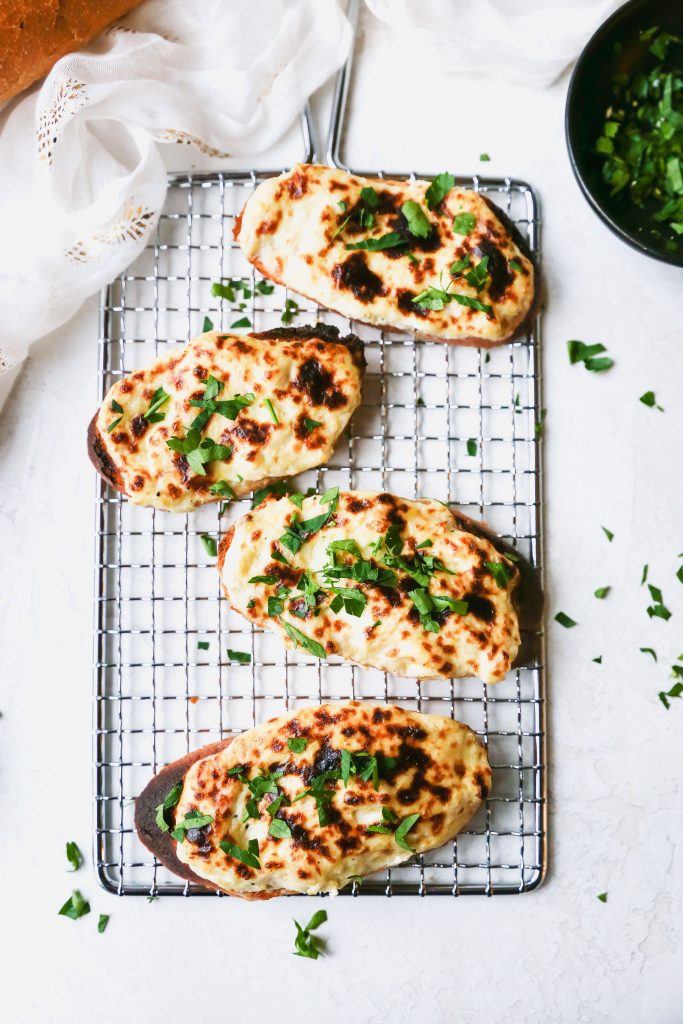 Is anyone excited for the Oscars this weekend?

I am, but I’m definitely not at my usual excitement level. I don’t know if it’s because of the distraction of being due to give birth in 8 days (!!!) or if it’s because I haven’t seen as many of the nominated films as I normally do at this point. 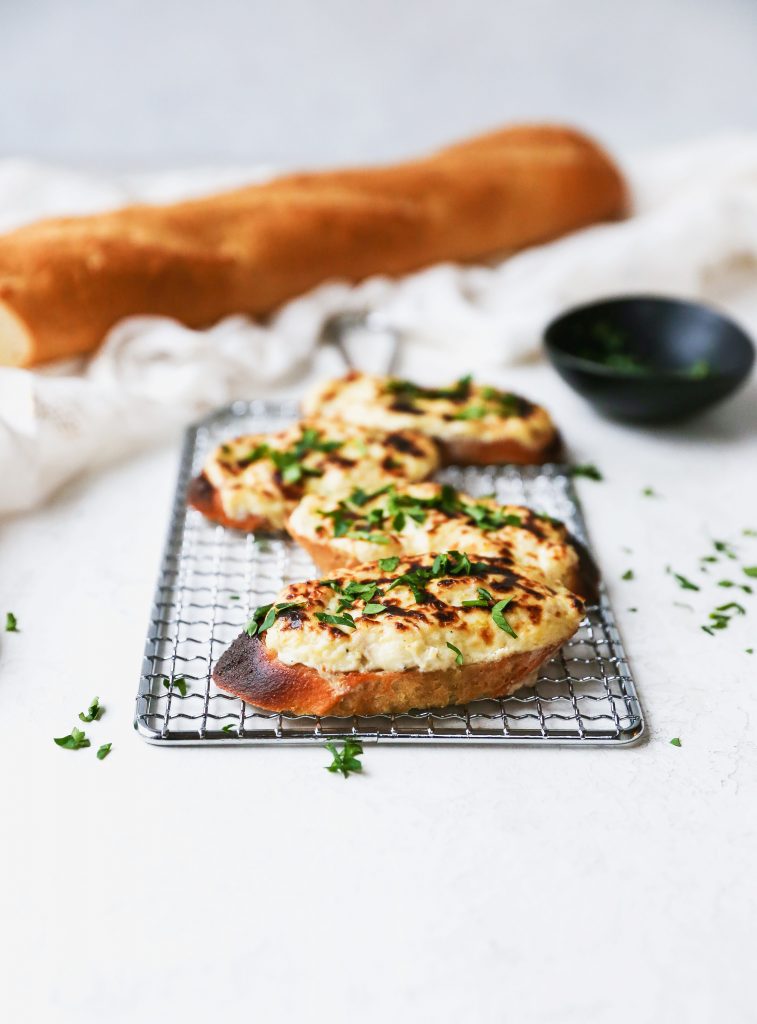 I loved loved loved “A Star Is Born.” Dan and I got to see it in the theaters, and I’ve been pretty much obsessed for the past few months. The soundtrack is on repeat all the time. Just this past weekend, we watched “Bohemian Rhapsody,” and we loved that one too. I love Queen, so it definitely resonated with me. Oh, and “BlacKkKlansman” was so good too – I can’t believe that it’s based on a true story. 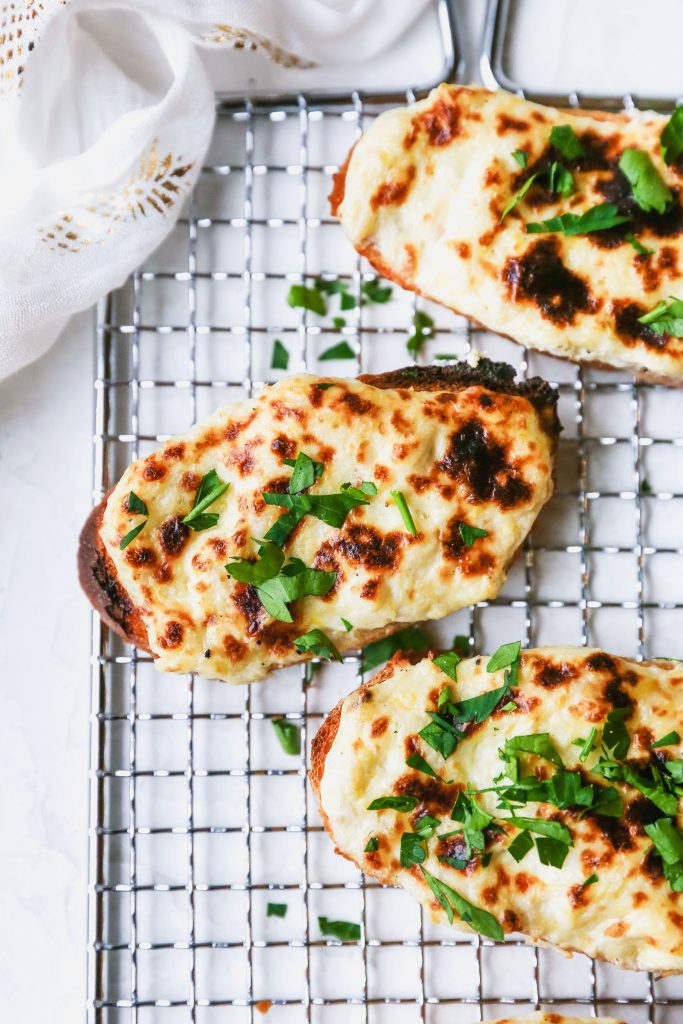 “Green Book” has been on my list for months now, but it doesn’t look like seeing it is going to happen before Sunday. Anything with Mahershala Ali has me sold. I LOVE HIM. And Viggo Mortenson is a longtime fave. I’ve heard the movie is amazing, and it just looks like such a good story. It’s definitely on my must-watch list.

For some reason, though, I’m not as “into” the show as I usually am. Dan and I have even started a fun tradition the past few years where we take the Monday after the Oscars off from work. Mainly so we can stay up super late to watch the show, while drinking cocktails and eating lots of fun snacks. 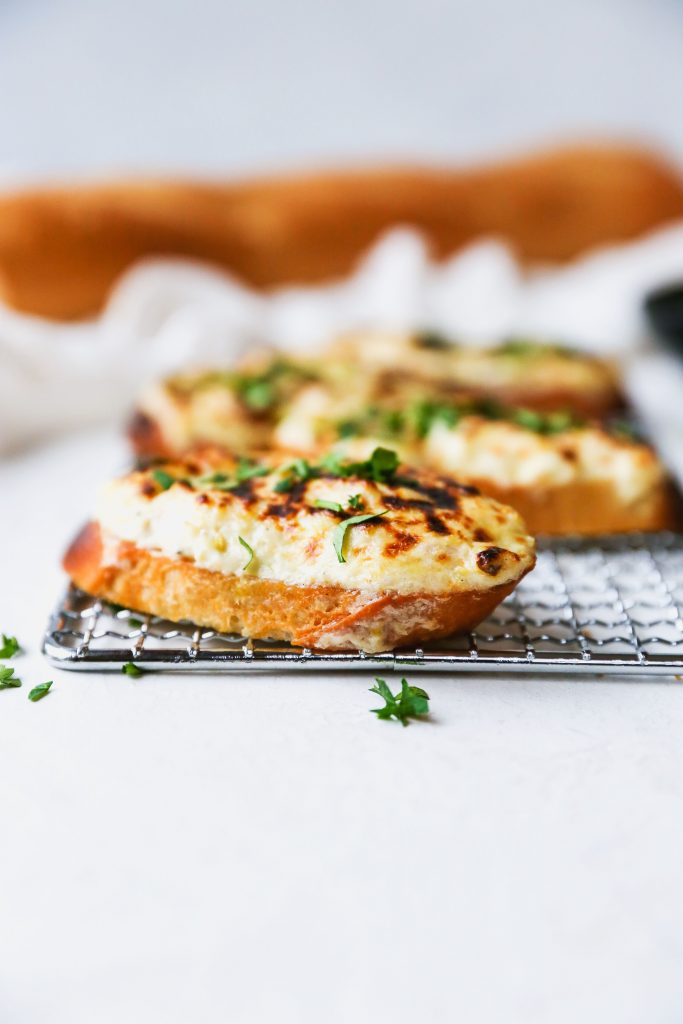 But this year? Well. We could have a new baby by Sunday. Shrug. It’s basically a waiting game at this point. I’ve been so preoccupied with that, along with trying to soak up as much time with Kieran as possible before he’s no longer my only child (cue all the hormonal, irrational tears), that lesser things like awards shows have fallen by the wayside this year. I guess it’s understandable, right?

Regardless, I’m coming at you this week with some fun snack ideas! 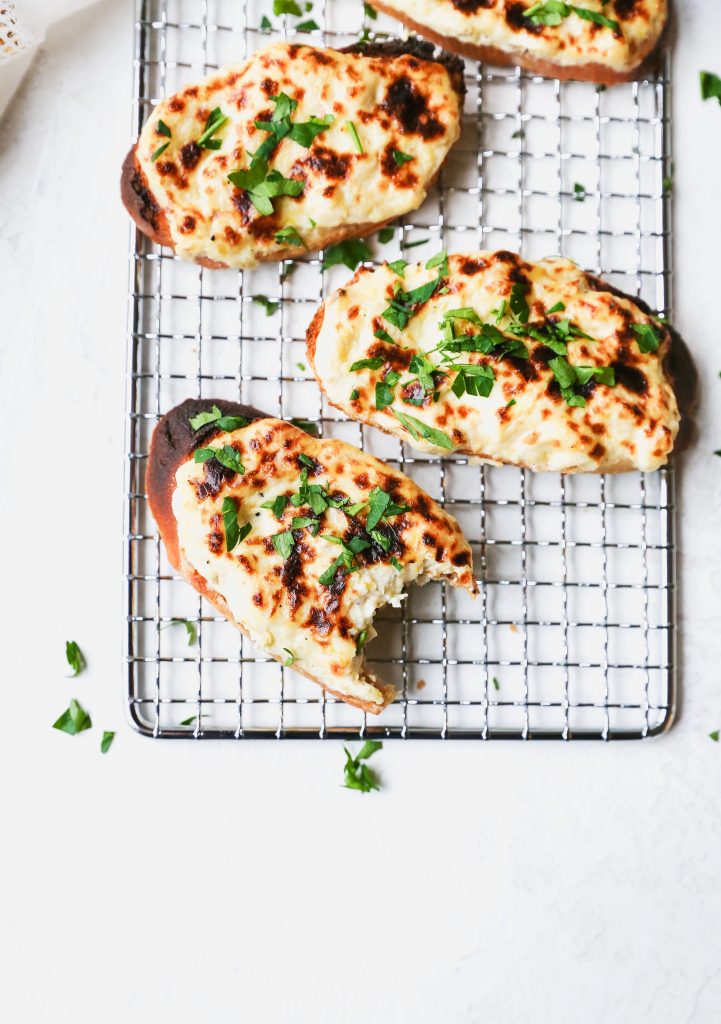 These caramelized onion and artichoke dip crostini are first up. These are so fun and SO delicious, and can be served as crostini or as a dip! Whatever you fancy.

I am a huge fan of spinach artichoke dip. Dan, however, is not. So, I rarely eat it. It’s not exactly something I want to make and then consume all by my lonesome. Dan IS a huge fan of anything with caramelized onions, though.

So this is my take on a classic dip idea but with some ingredient swaps. The spinach is gone and replaced with sweet, caramelized onions. I use my favorite creamy ingredients and spice up some frozen artichoke hearts with some easy seasonings. It all gets whipped up in the food processor until creamy and cheesy and delightful. 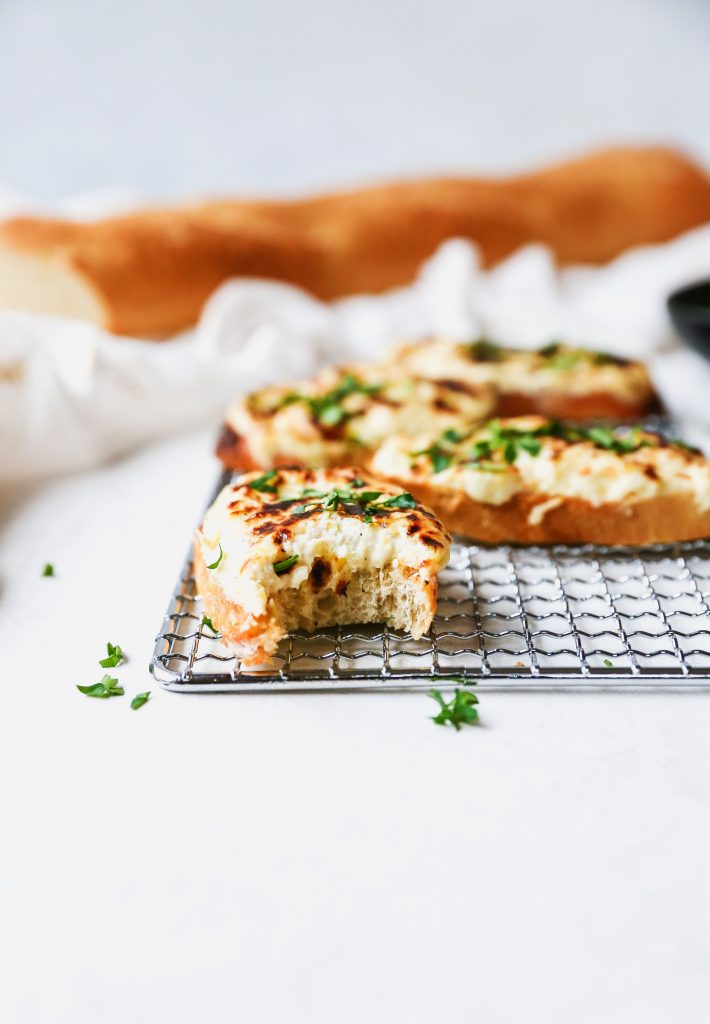 You can bake it off as a dip or spread it on slices of baguette and toast them in the oven for the most delicious cheesy toasty bite. I tested it both ways and while I don’t have a favorite, I do like the idea of crostini for an Oscar-viewing party. It feels more fancy! Plus, it makes holding that champagne flute in the other hand a lot easier.

So that’s what we have here! 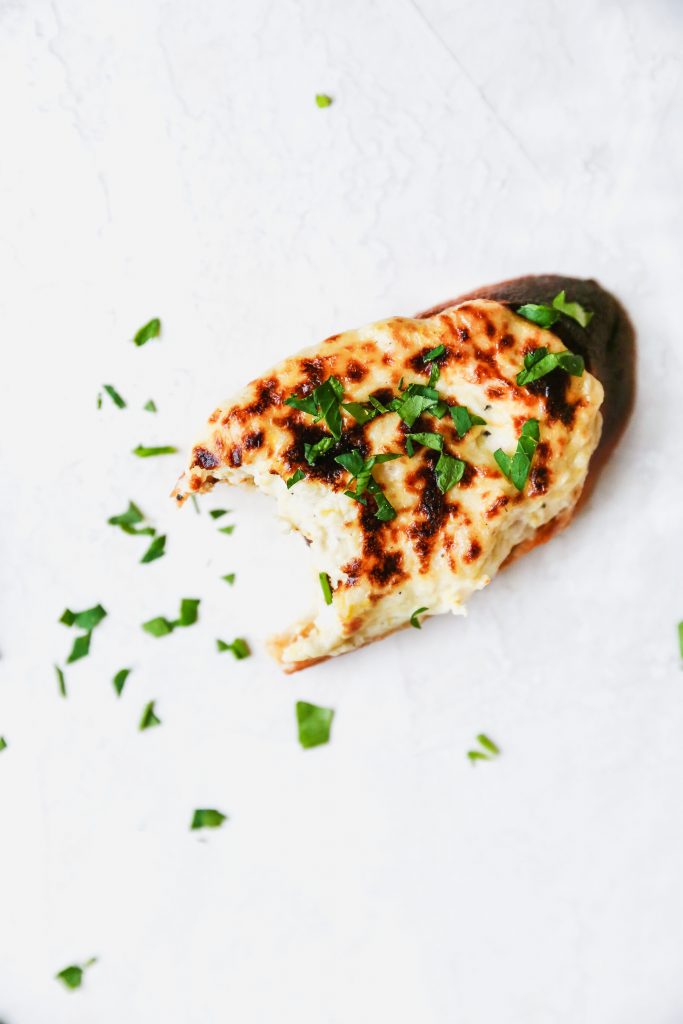 They are the perfect little bite and would go swimmingly with a glass of bubbly. Who knows? Maybe I’ll be able to indulge in one of those come Sunday.

To serve as a dip: 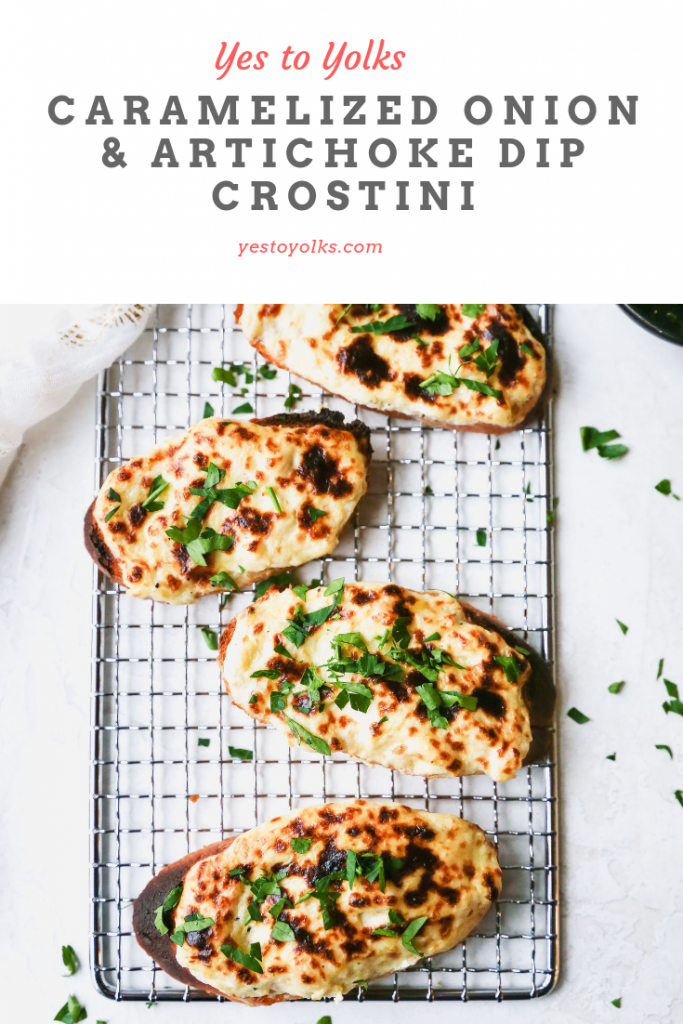