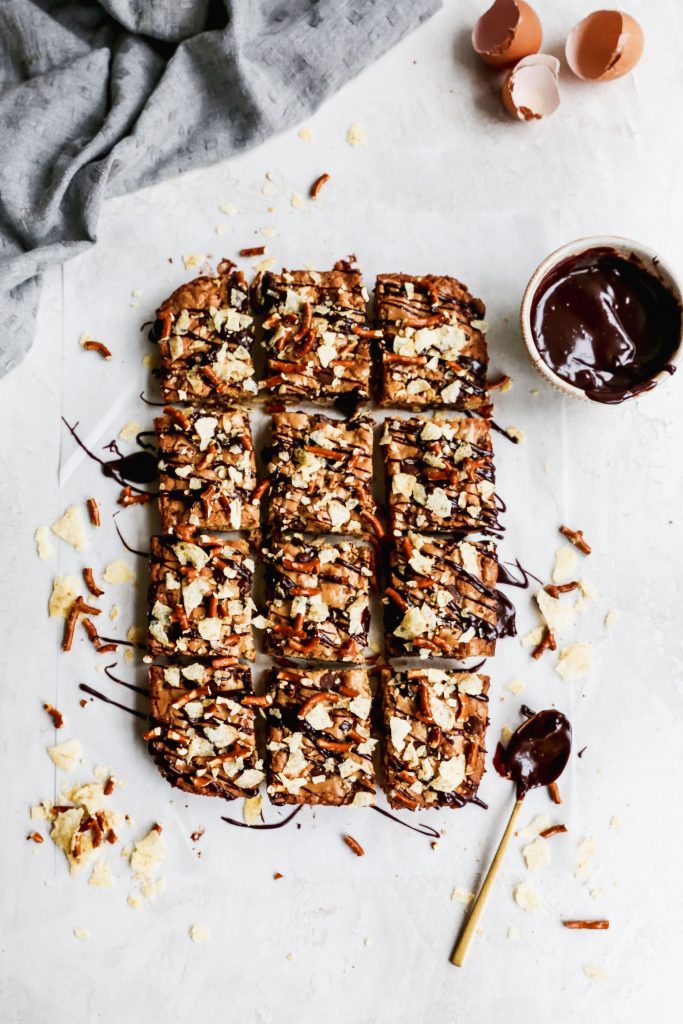 Calling all sweet and salty peeps!

I have something EPIC to share with you today, on this September Monday. These blondies are the ultimate sweet and salty treat. They have a little bit of something for everyone.

And they’re here to make your Monday better. 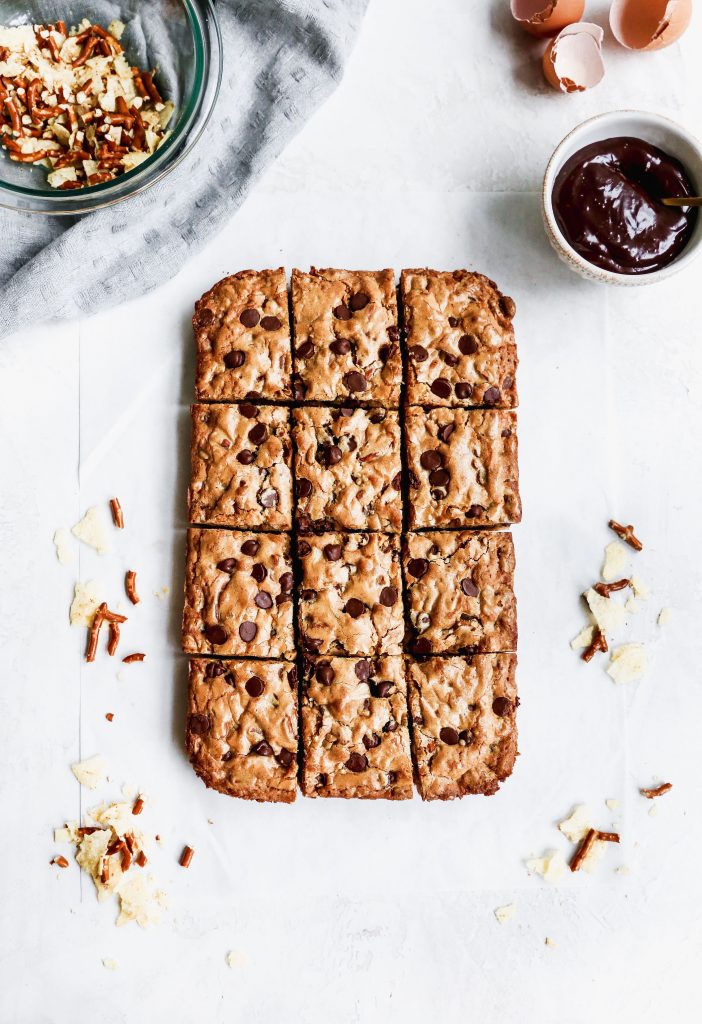 We had a doozy of a weekend. Not in a bad way at all, but we were just extremely busy and today feels like a very Monday Monday. If you know what I mean. On a whim, I suggested to Dan that we flip flop some of the rooms in our house. We have an office and a formal sitting room, along with a crap-ton of kids’ toys that have started to take over the entire house, despite there being a designated “play area” in the basement. 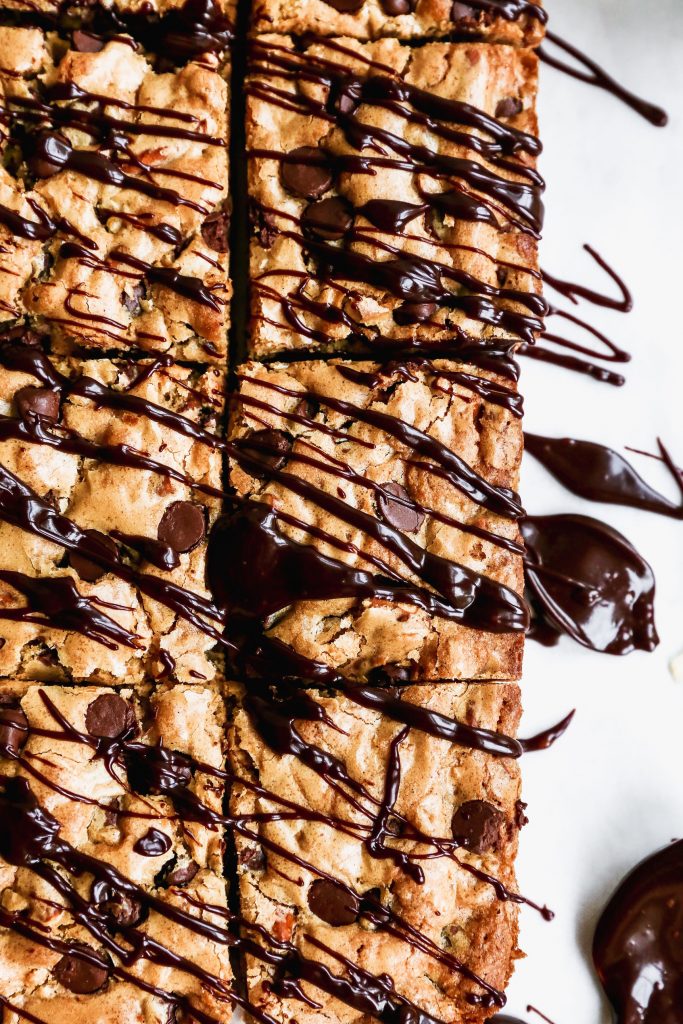 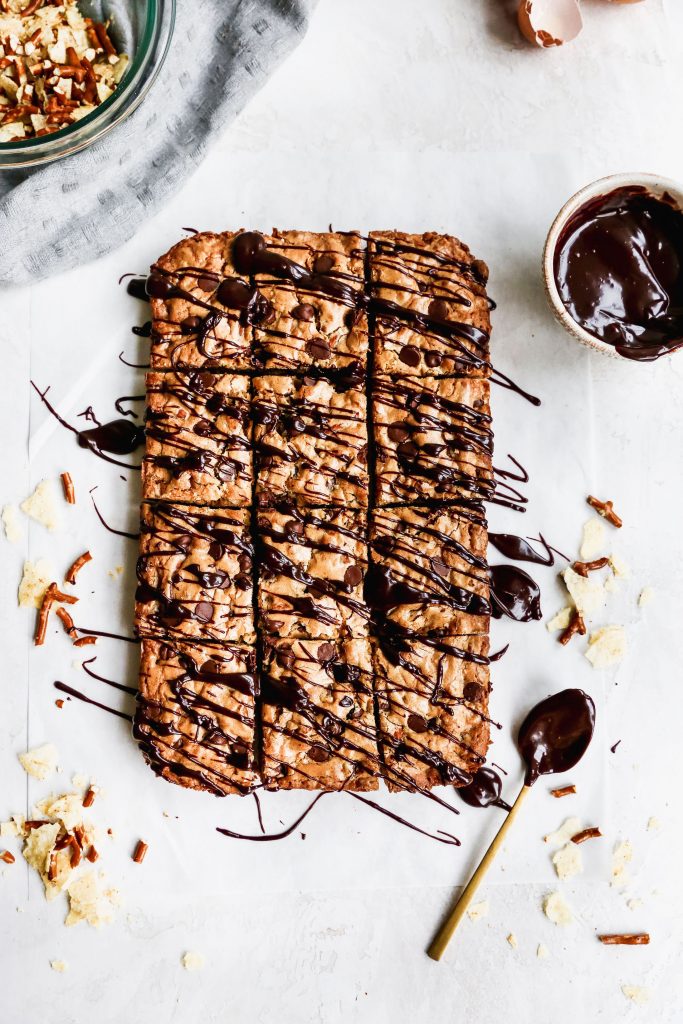 So, we decided to move our office into our formal sitting room, which we also never used, and designate the office space as Kieran’s new playroom. This involved a TON of furniture moving, along with all of the toys from the basement. 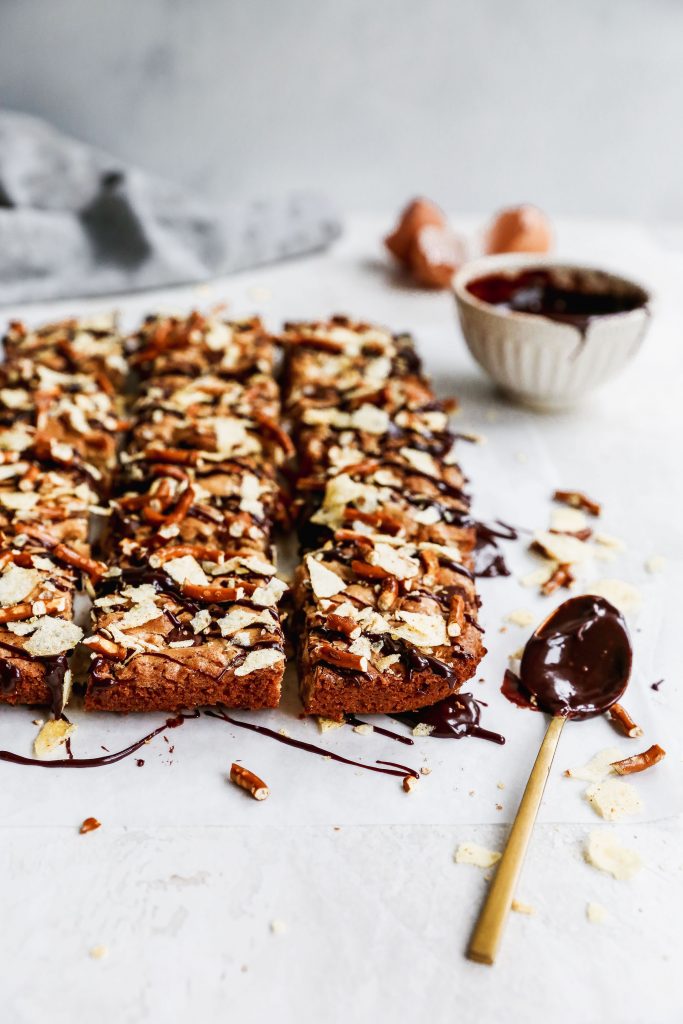 Things are still kind of a hot mess, but it was an extremely productive weekend. And I’m feeling much better about how we’re utilizing our main living space. Kieran has a playroom, which he spent 4 hours straight in yesterday, re-discovering so many of his favorite toys. I have a designated office space. And our formal sitting room is gone for now, which is fine with me. 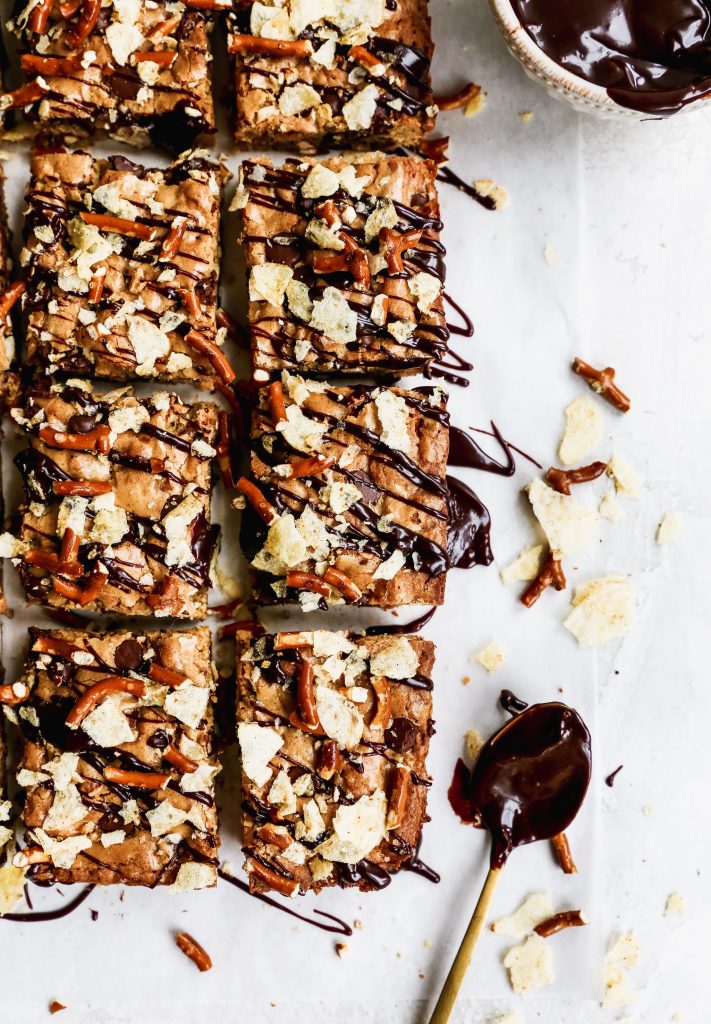 And definitely in need of some blondies. Especially THESE blondies. OMG. They are so good. The best of all worlds.

I take a decadent blondie recipe and fill it with dark chocolate, pretzels, and potato chips. A sprinkling of flaky salt over top would be just the thing to finish these off, buuuut, I had to take it to another level. Of course. 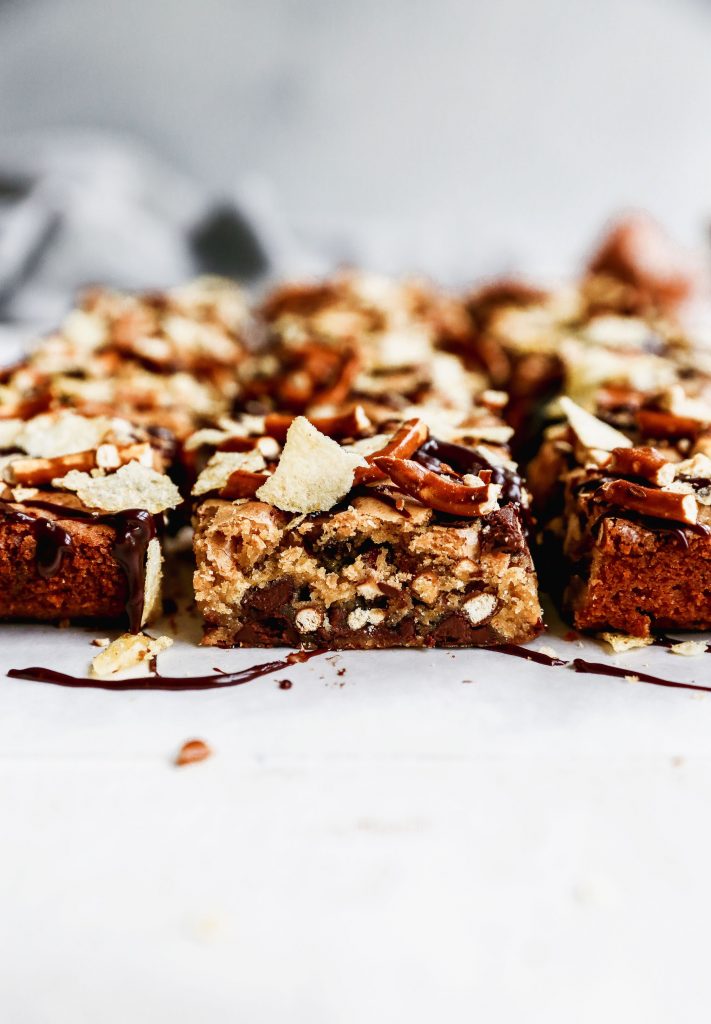 I drizzle these blondies with dark chocolate ganache (!!!), more chips, and more pretzels. Oh, and that sprinkling of flaky salt. It totally makes the flavors sing.

I love making blondies like this instead of cookies because they are SO much easier! It takes 5 minutes to whip up the batter for these. And instead of scooping out and baking individual batches of cookies, I just pour everything into a pan and bake once. Slice and serve. Blondies are amazing in every way, but their ease is one of my favorite things about them. Well, that, and the delicious fudgy, gooey texture. 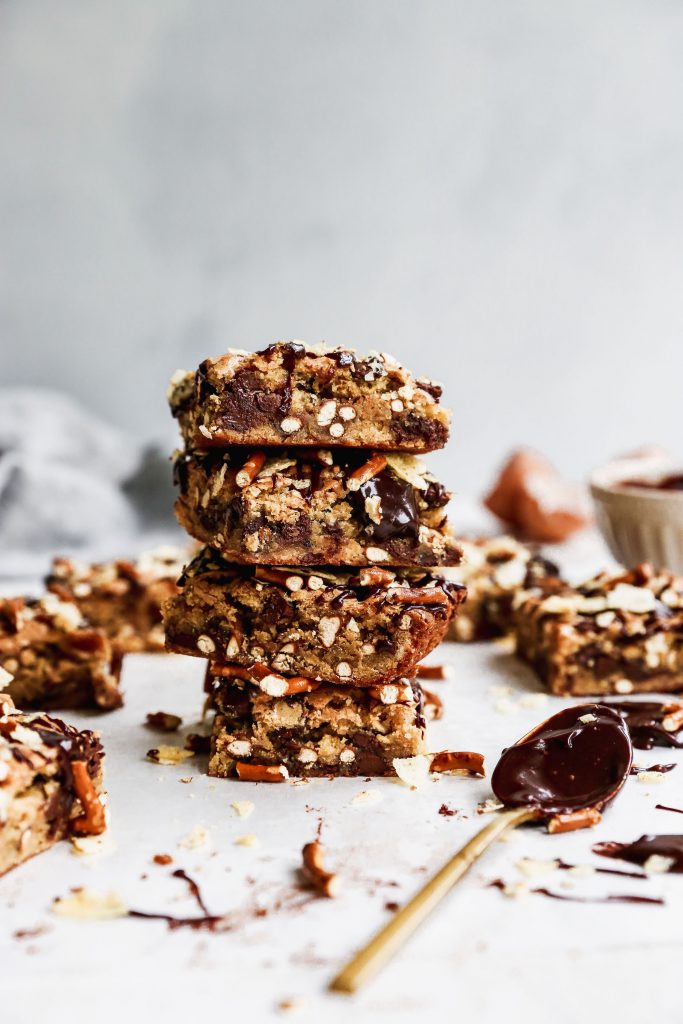 Decadent doesn’t even begin to adequately capture these. These are the most “extra” blondies I can think of, and I have zero regrets. 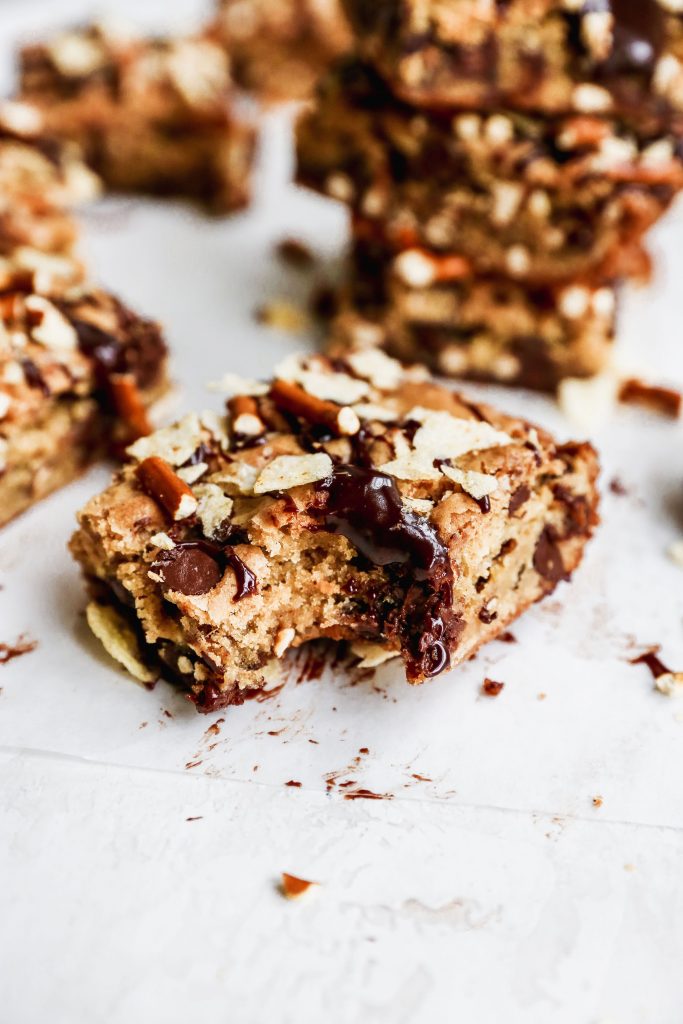 These decadent, gooey blondies are loaded with sweet and salty flavor. Not only do they have tons of chocolate going on, but they also feature pretzels and potato chips! A drizzle of chocolate ganache sends these over the top!

For the Optional Topping: 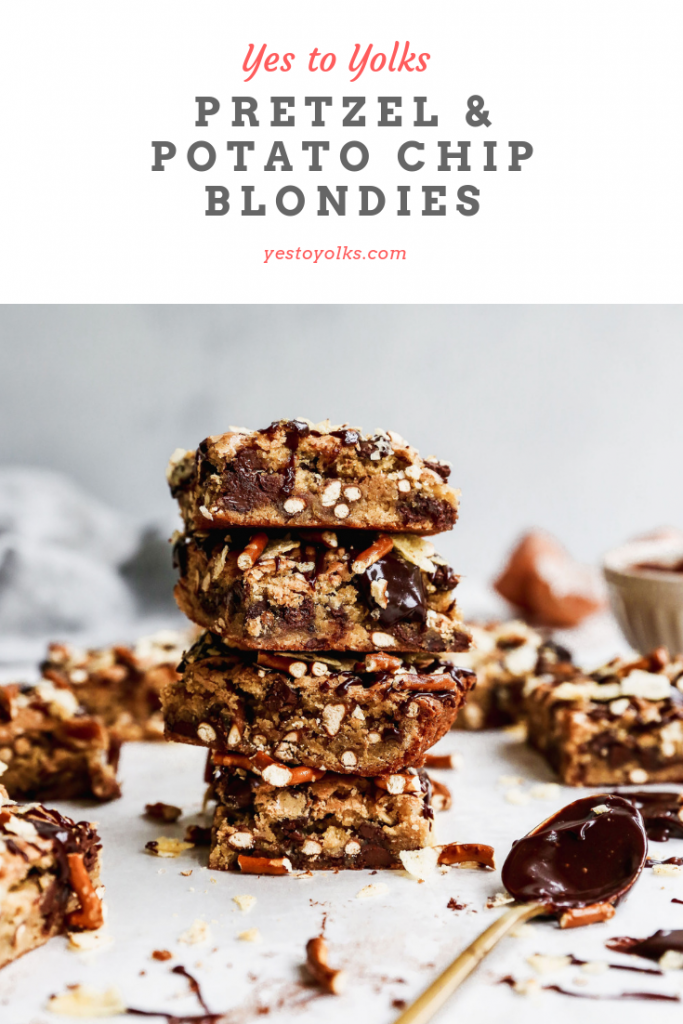