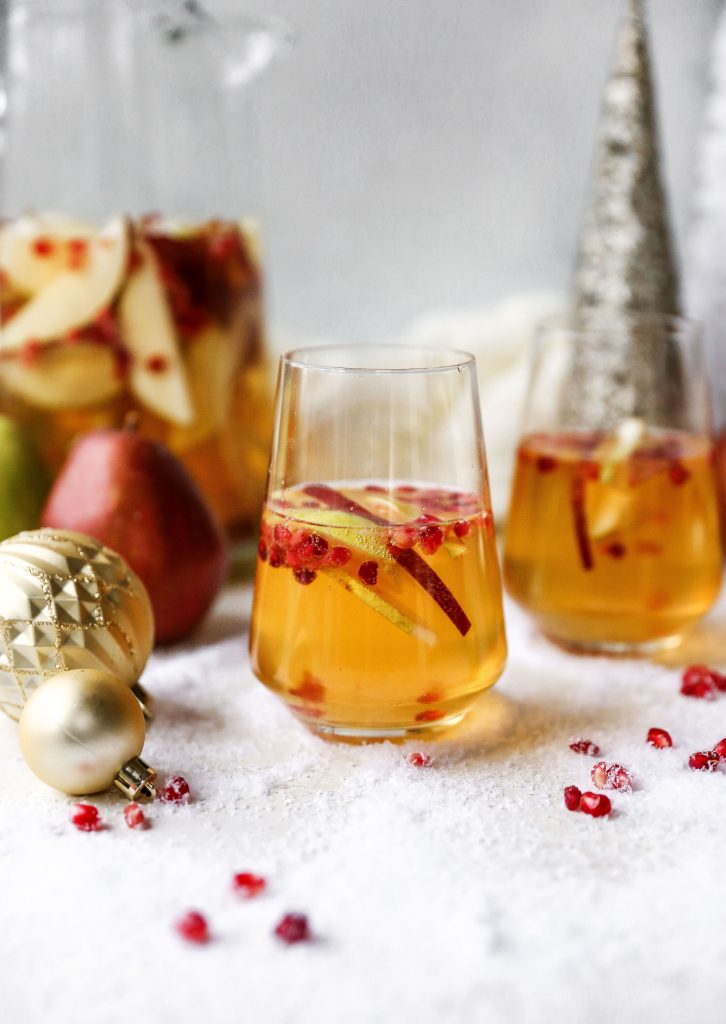 Today I’m serving up a festive glass of bubbly!

This ginger bourbon pear sangria is my new fave. Well, that is until I have my next fave. You know how it goes.

This cocktail is seriously so good, though.

I wanted to come up with a fun Christmas-y punch type drink that could be made for a crowd, but I wanted to stay away from the classic cranberry flavor. Not that I don’t enjoy cranberry drinks (I do!), but I’ve already made some festive cranberry drinks in the past. I wanted to do something a little bit different but still chock-full of the flavors of the season. 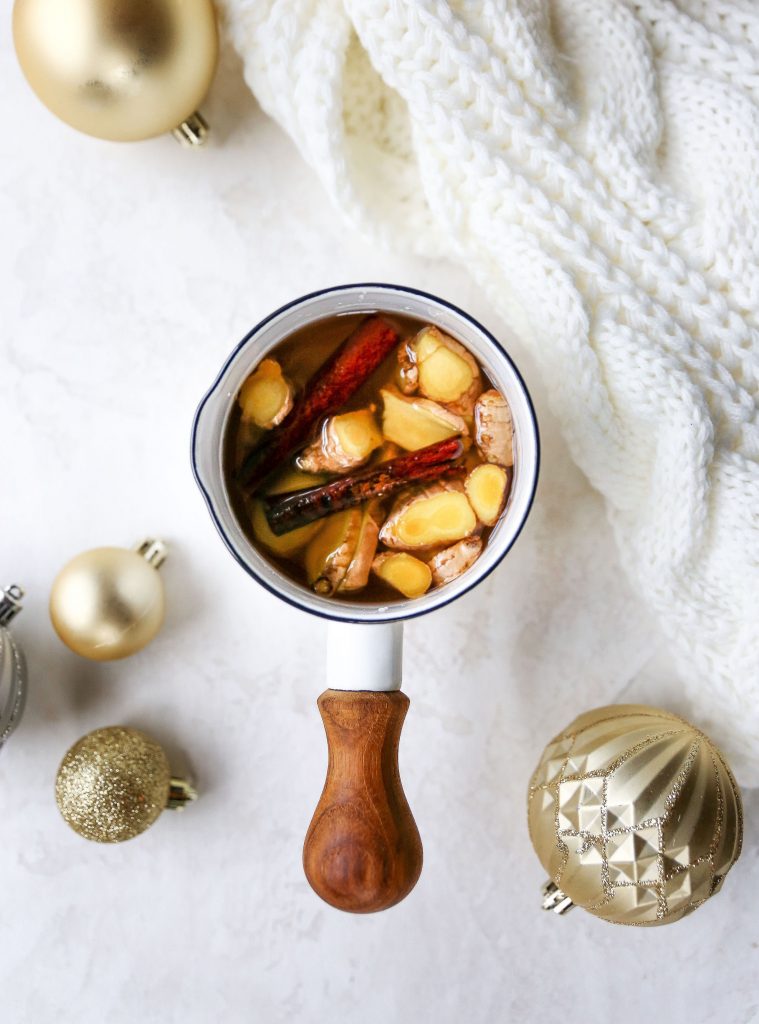 This sangria starts with a spiced simple syrup. I steep fresh ginger and cinnamon sticks in sugar syrup until it’s warm and cozy and heavenly. The syrup could be used in SO many things. The wheels in my head are already turning!

Once the syrup has cooled, you put it in your serving pitcher or punch bowl along with some pear nectar, bourbon, and white wine. Doesn’t that sound heavenly? 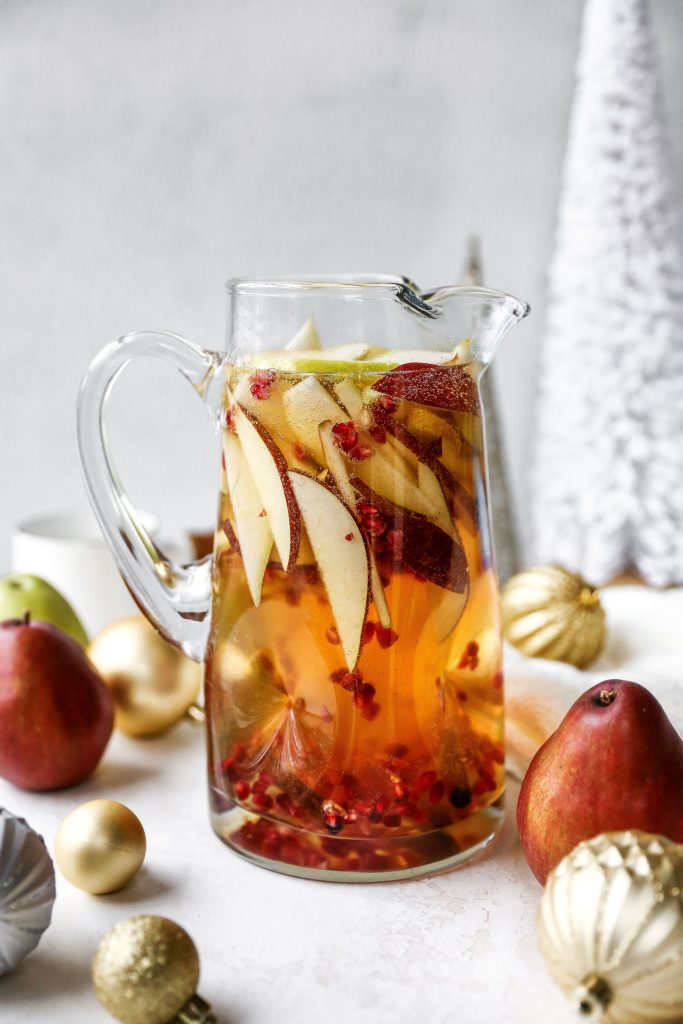 You stir in the fruit, pears and pomegranate arils, and pop the whole thing in the fridge to chill a bit. This is also a great time to chill your prosecco and ginger ale! You want everything to be super cold when it goes into the pitcher.

I often make the base for sangria a few hours ahead of time and just keep it in the fridge. It just tastes better the longer it hangs out! If you wanted to make the base a day or two ahead, you certainly could do that, but I recommend holding off on adding the fruit until the day you want to serve. Otherwise, it gets a little….weird. I’m sure you know what I mean. 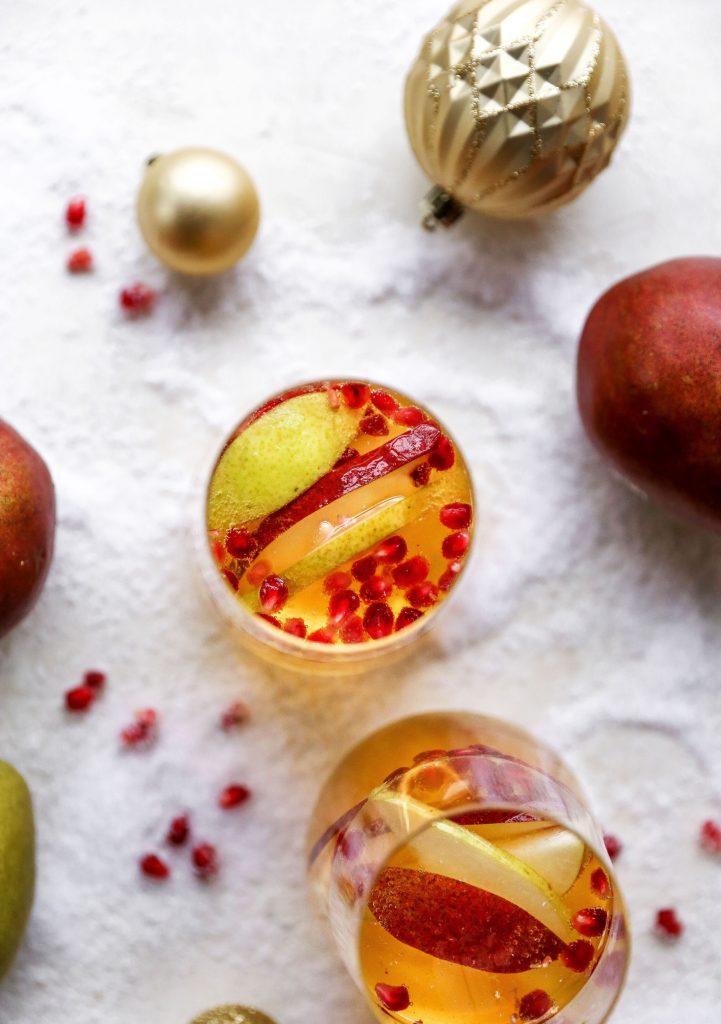 Add in your prosecco and ginger ale (or seltzer if you prefer something a little less sweet) and set it out to serve!

I’ve said this before, but I love sangria/punch style cocktails for the holidays because you can set everything out and let people serve themselves. Our usual plan for Christmas Day involves a quiet and easy morning with the kids, cinnamon rolls, and mimosas, followed by ALL THE FAMILY coming over in the late morning/early afternoon and hanging out all day long. I usually do a big snack spread early in the day for “lunch,” and a slightly more formal meal for dinnertime. 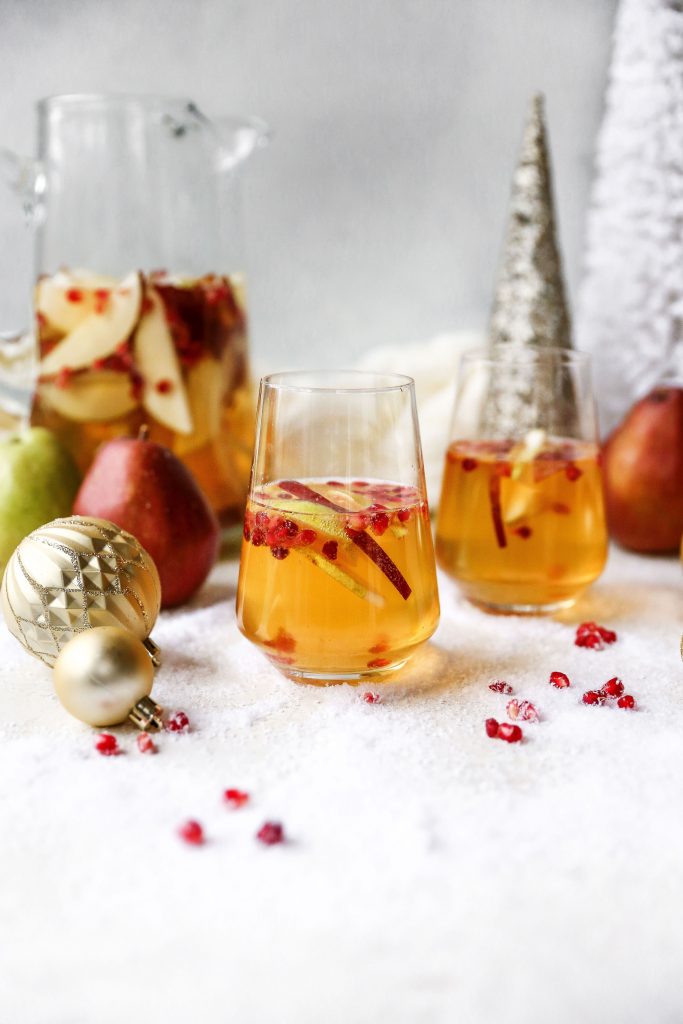 Sipping on a glass of this sangria all the while!

For a long day of hosting, like Christmas Day, I love making two batches of the sangria base (simple syrup, bourbon, white wine) and refilling the pitcher as needed. I’ll whisk one up in the serving pitcher and one up in a mason jar, keep both in the fridge, add the fruit an hour or so before serving, and then top off with the bubbly! 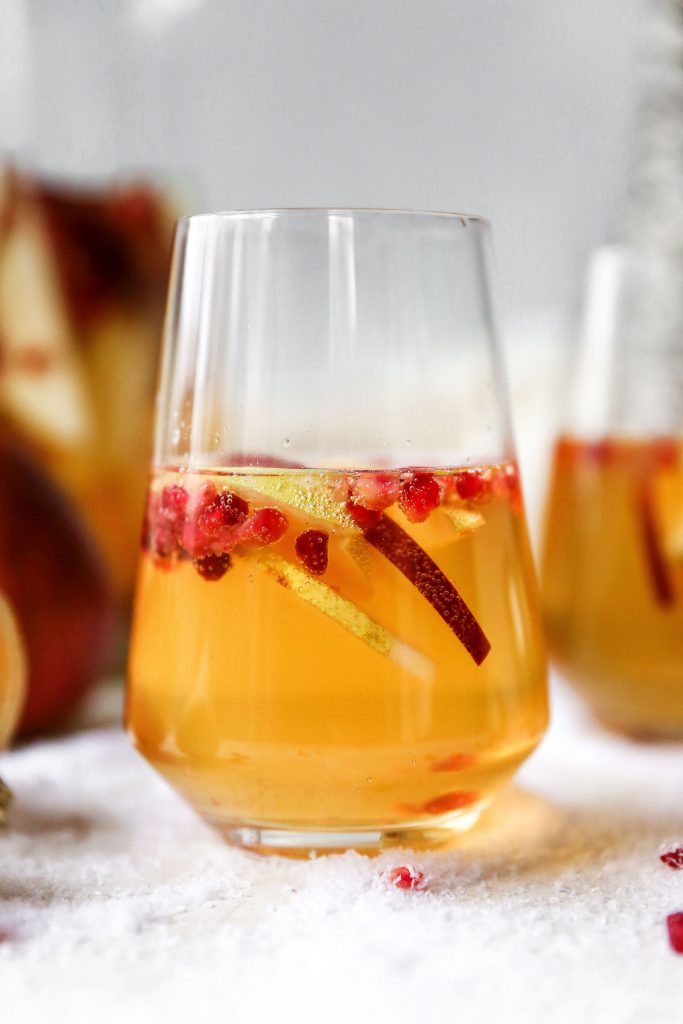 Trust me, this stuff goes fast. People love a sangria. If you’re hosting a larger group, do yourself a favor and make two batches. You want to count on everyone having at least two glasses of the stuff. And that goes for ANY punch or sangria recipe.

Worst case scenario? You have leftovers. 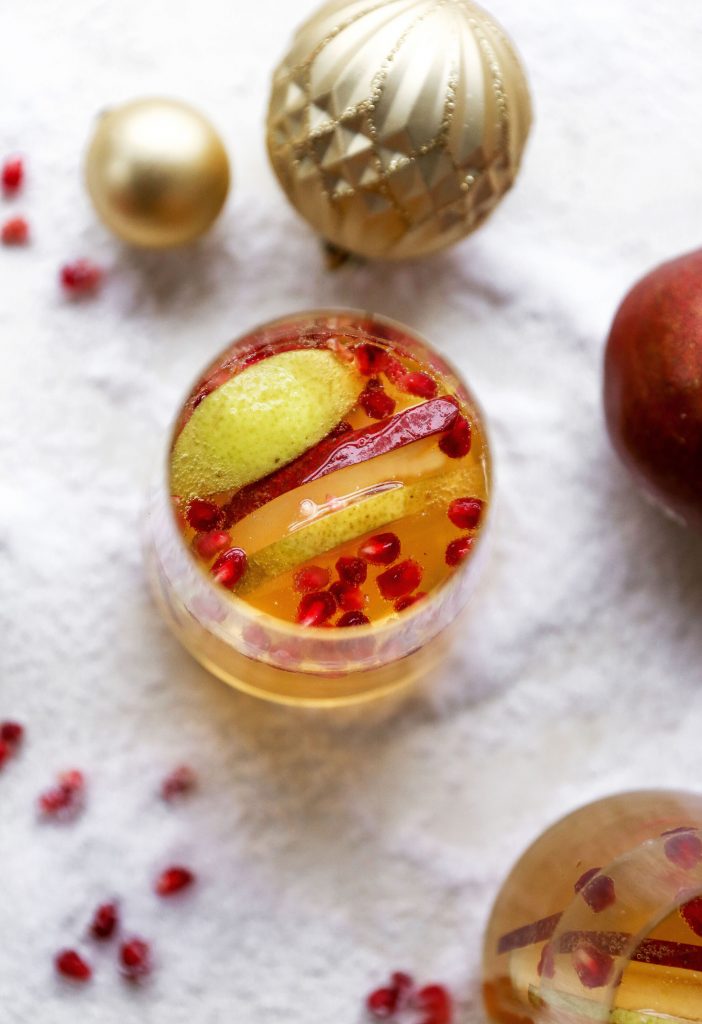 Which just means that the celebrating continues past Christmas!

Nothing wrong with that. Cheers! 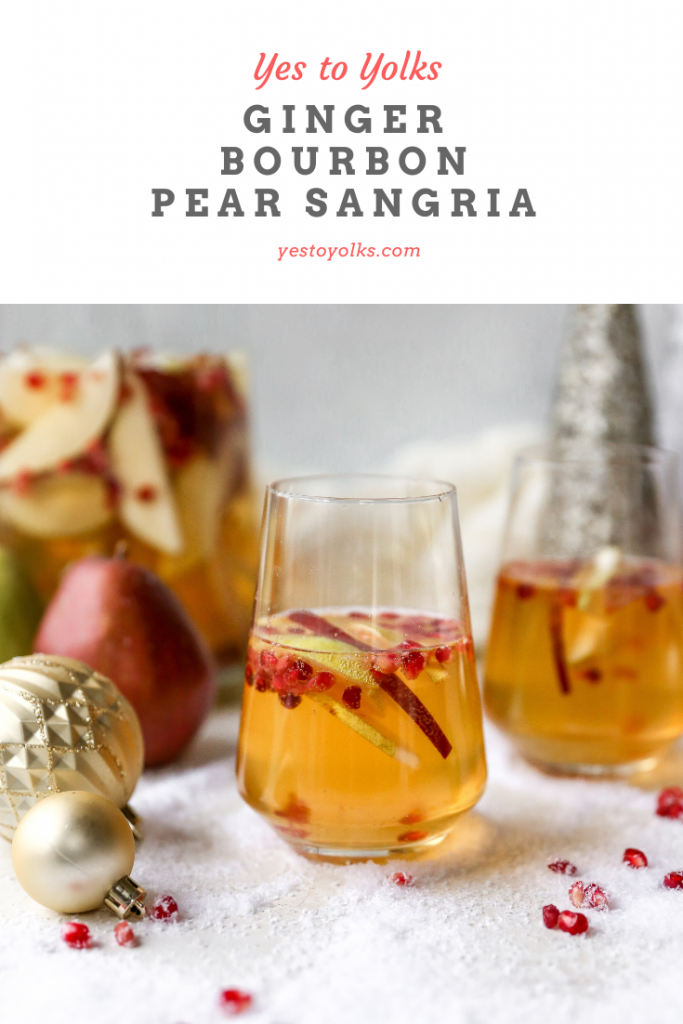