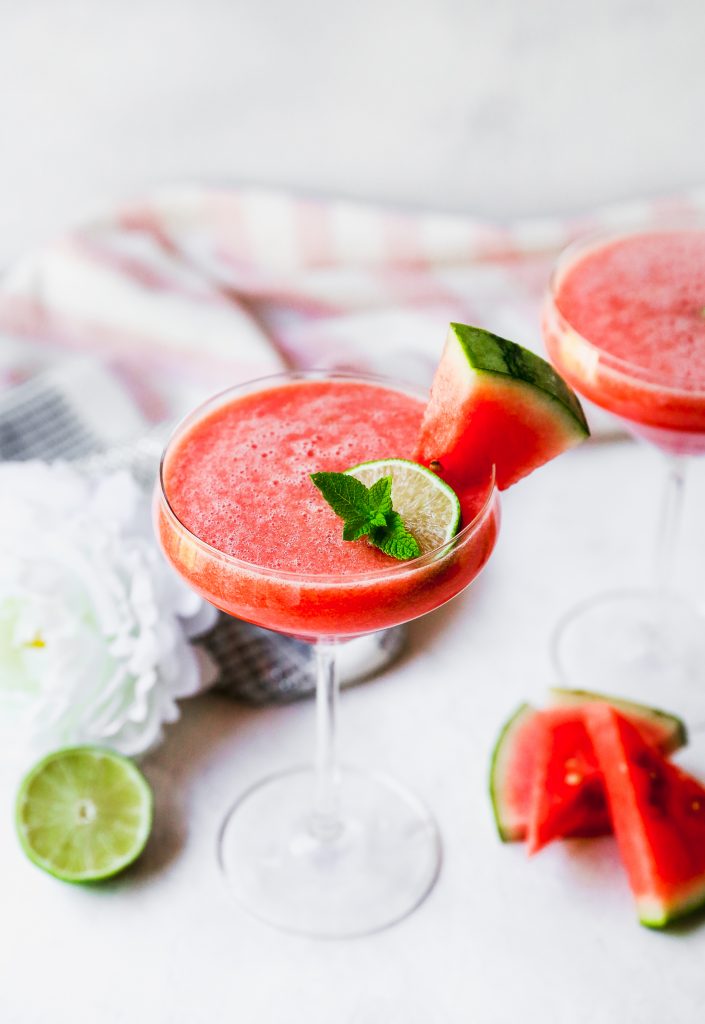 Today is going to be a good day. 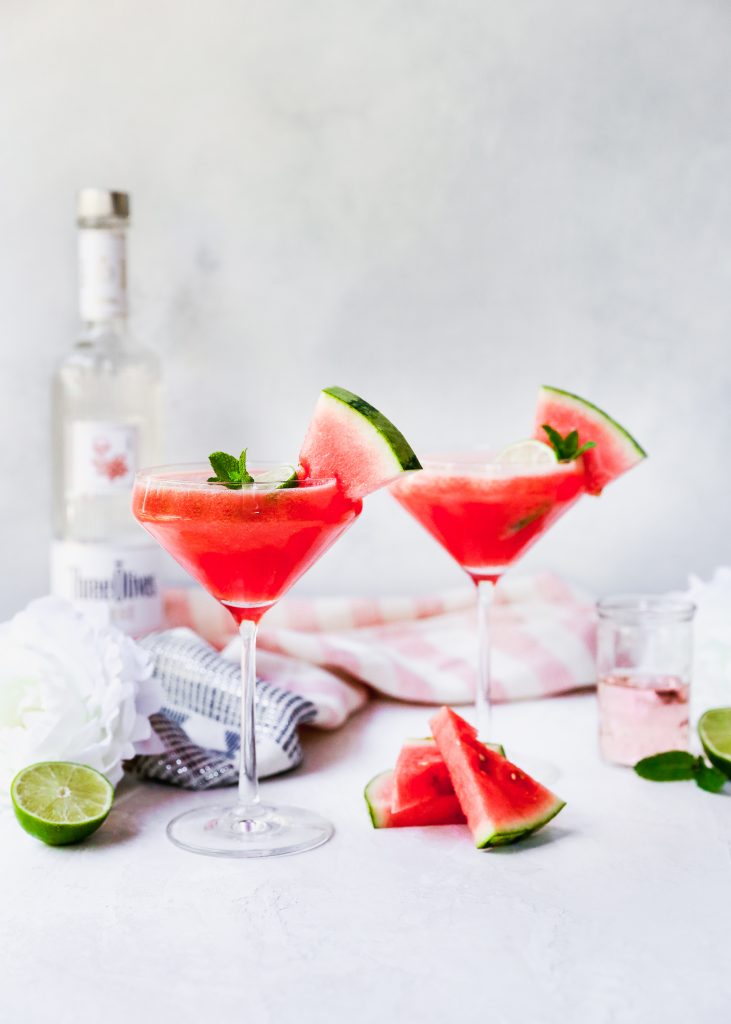 Yet another food-designated holiday that I can definitely get behind. One issue I have is that it is falling on a Tuesday. I don’t know about you, but I don’t usually drink martinis on Tuesdays. Thursdays, sure. Fridays, definitely.

But I’ll still take it. Because I love any reason to mix up a fun cocktail for you guys. 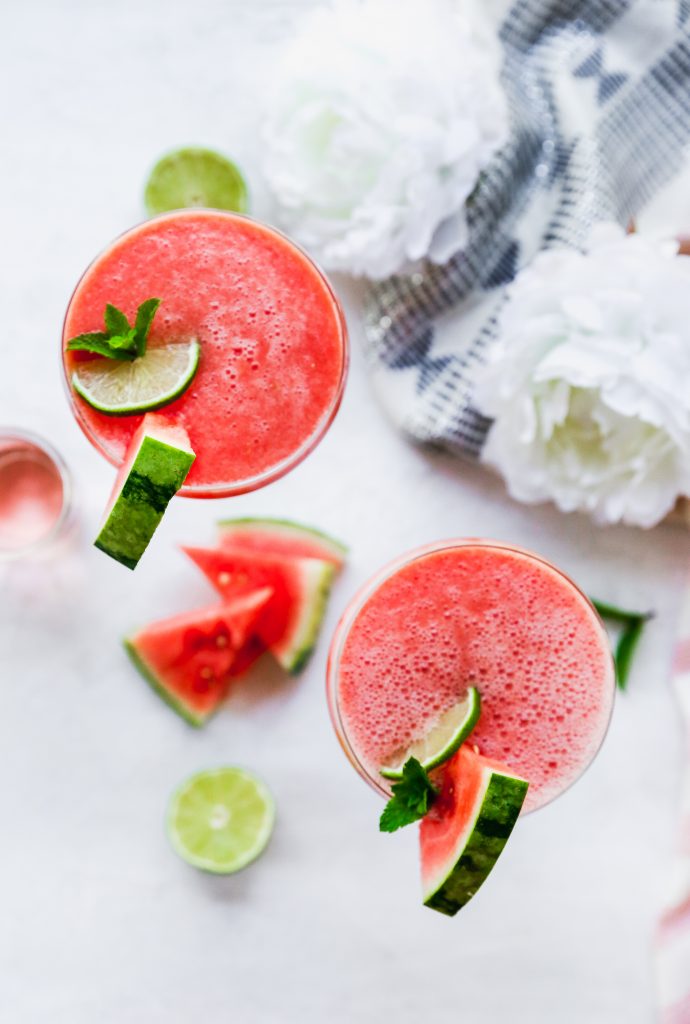 And THIS cocktail couldn’t be easier to make. It requires just a handful of ingredients, and your blender does all the work for you. Gotta love when that happens.

Every summer I go through a major love affair with watermelon. When I was pregnant all summer long with Kieran, I think I ate a watermelon a week by myself. I LOVE IT. It is one of my favorite fruits, and when it’s in season, there really isn’t much better on a hot day. Especially when you’re 8 months preggo. Hah. 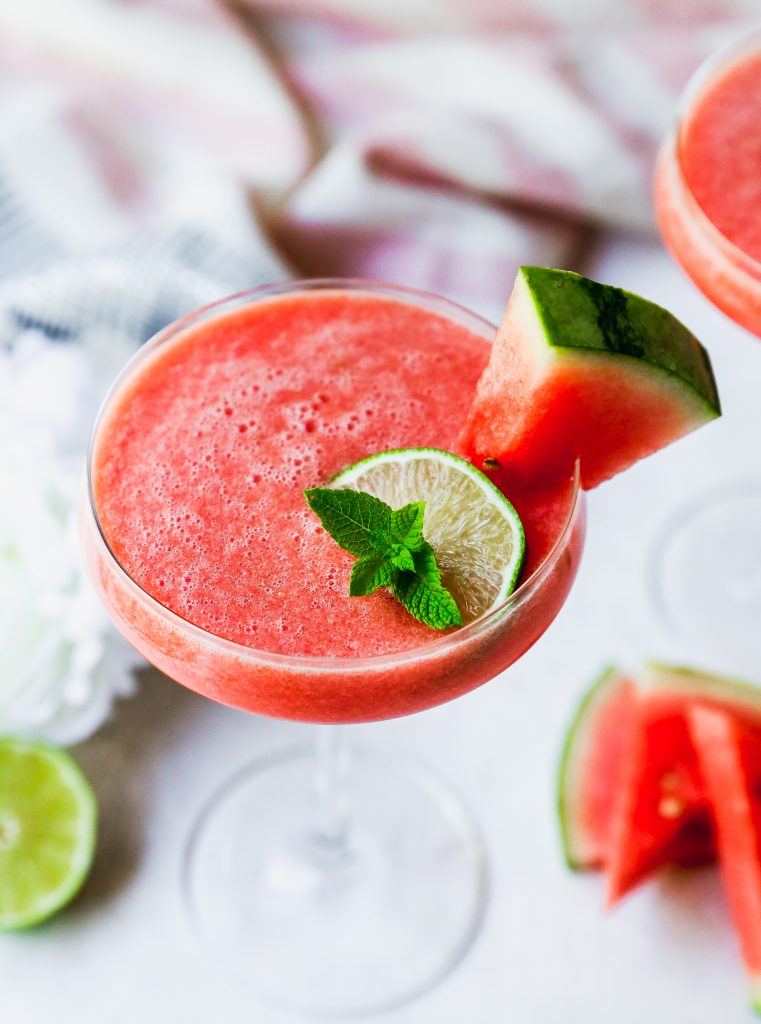 I tend to eat my watermelon in the most basic way possible: simply sliced up and chilled. Nothing fancy. Maybe sometimes with a spritz of lime juice or a sprinkle of salt. Most times, though? I like it all by itself, just super, super chilled. But every now and then, I mix things up and add it to my drinks or salads or tacos. You name it, I’ve done it. And I’m not stopping anytime soon! 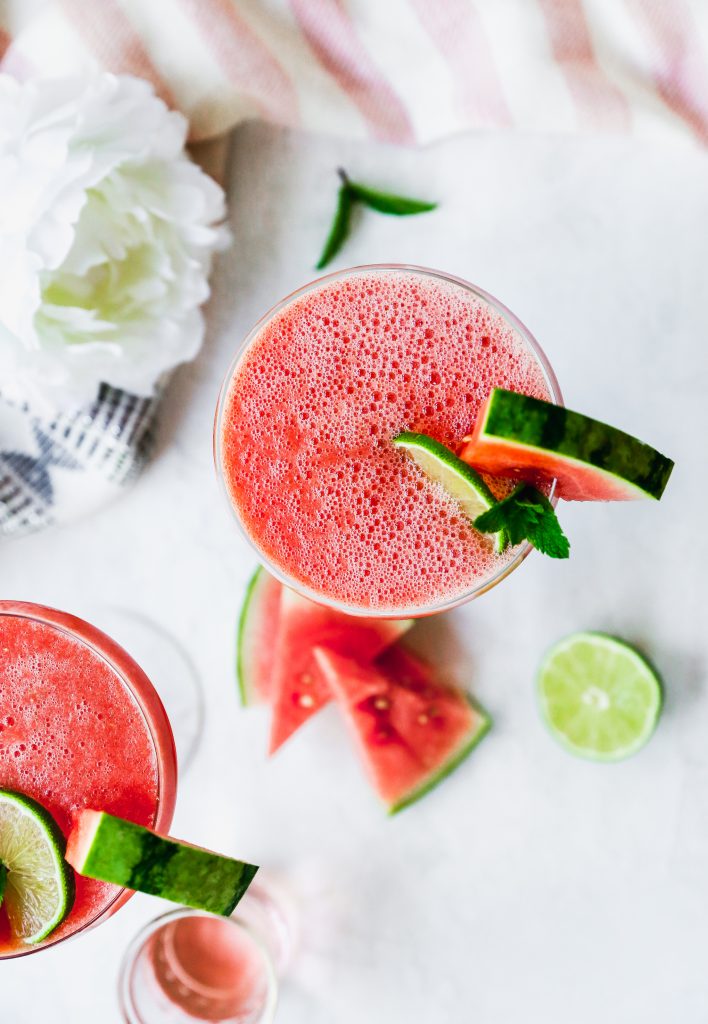 These martinis are the first stop on the watermelon express this summer. Let’s get into them, shall we?

All these require is some fresh watermelon, vodka (we’ll get to that in a minute), fresh lime juice, and sweetener in the way of honey or agave nectar if you’re so inclined. If you are using a really good, really ripe watermelon, you may not need the sweetener at all! You puree the watermelon in a blender until you essentially end up with watermelon juice. This then gets shaken up with lots of ice and the other ingredients. 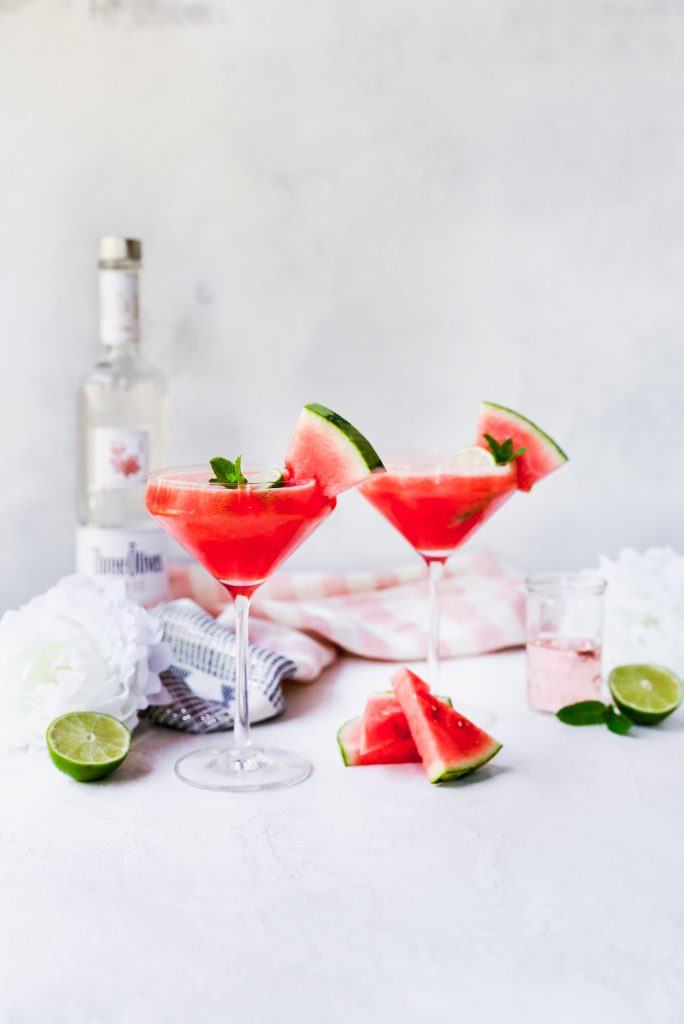 Now, part of what makes these so special is the vodka I use. Rosé-flavored vodka! Yes! It’s a thing! I discovered it back in early May during my sister’s bachelorette party weekend (I was there with girls much younger and cooler than me, so naturally, they introduced me to the stuff). We drank it all weekend, with seltzer and lots of fresh fruit. So simple and so yummy! It’s all the flavor of rosé wine but with a vodka kick! And it has made making summer cocktails so much fun. 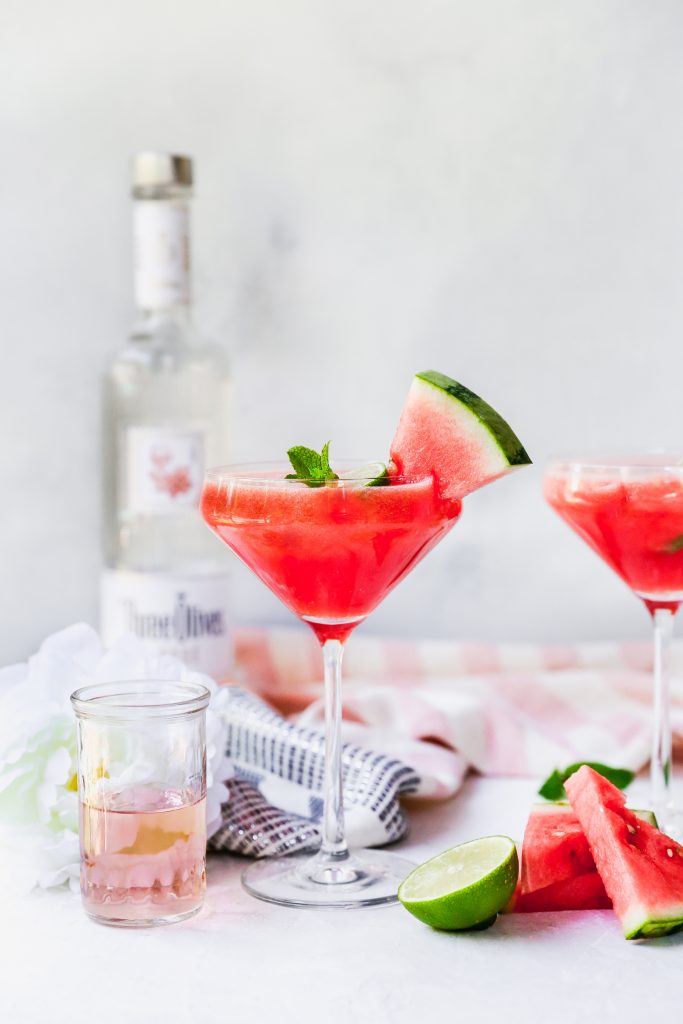 These martinis end up tasting somewhat like a cross between a watermelon slushy, a fruit and wine spritzer, and a vodka martini! So fun and sooo simple. They are destined to be sipped poolside this summer.

One word of warning, though: they go down SO EASY. Like, almost too easy. You’ve been officially warned. 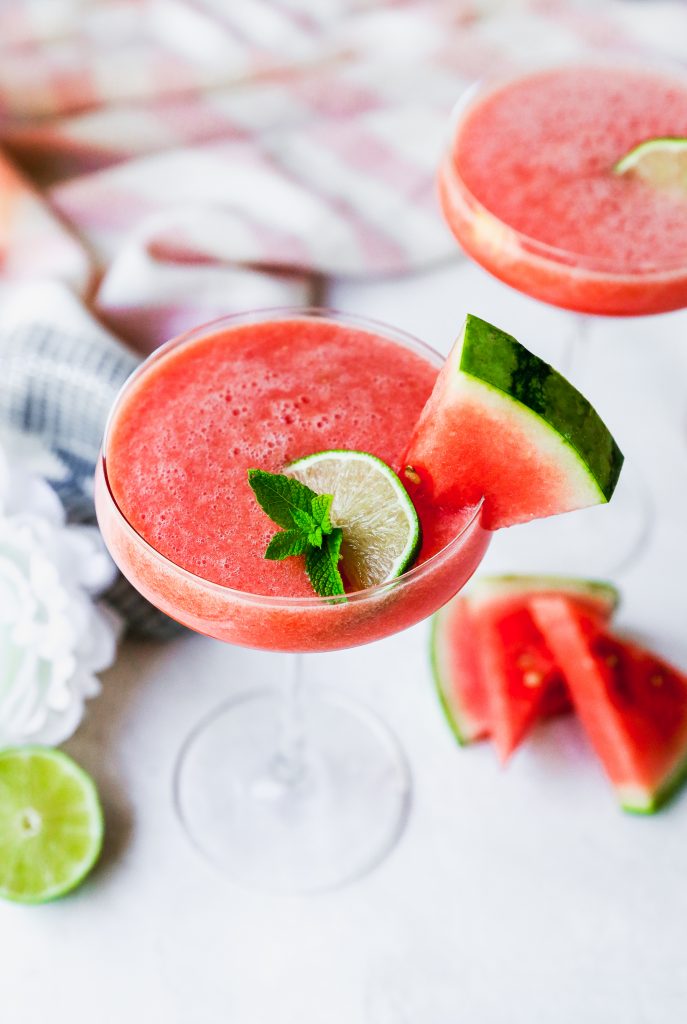 Cheers to National Martini Day! And cheers to watermelon season!