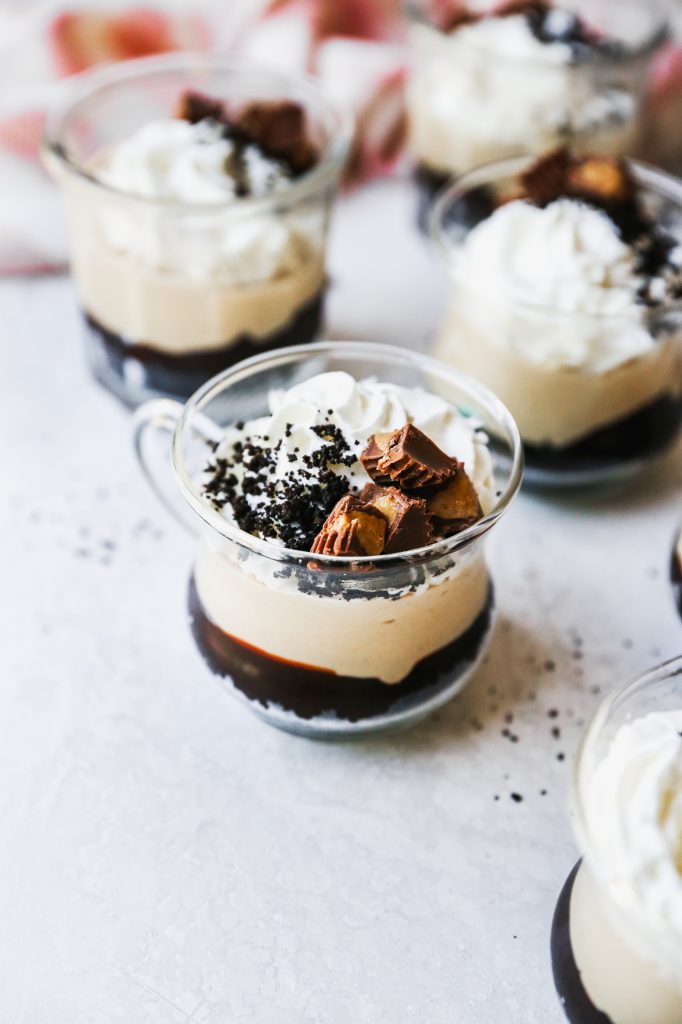 I have the world’s easiest but most decadent dessert for you guys today!

And it’s all in honor of Dad. Well, at least the dad in our house. 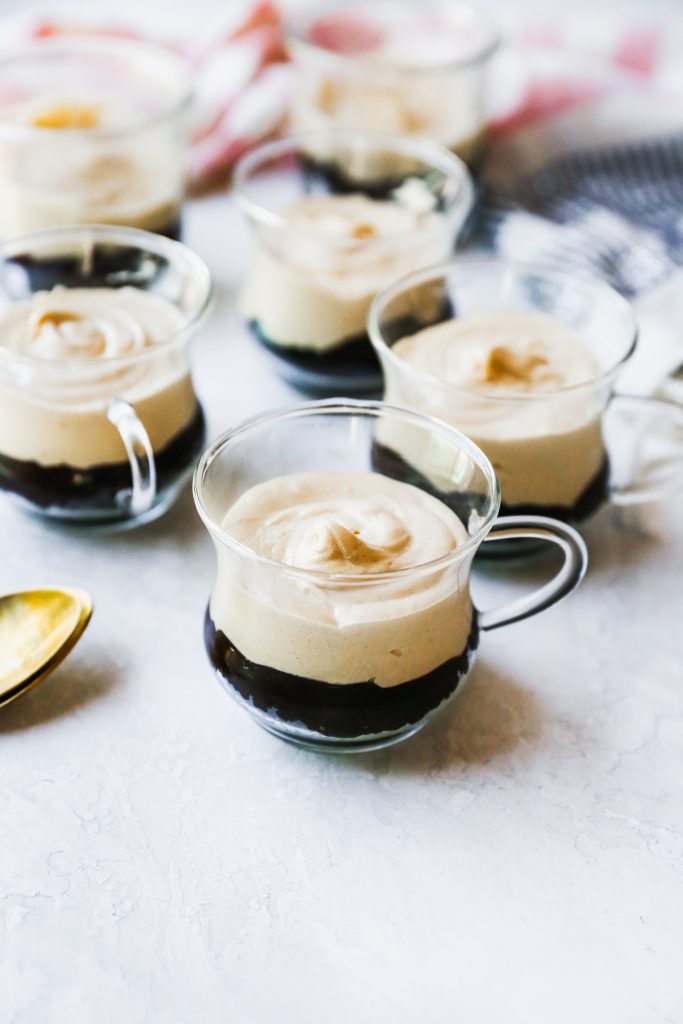 It’s no secret by now that Dan LOVES anything peanut butter chocolate. I have shared a bunch of recipes featuring this flavor combo over the years, and almost always, the recipe is in his honor. Whether it be for Father’s Day, his birthday, or “just because.” My honey loves him some Reese’s, let me tell ya. 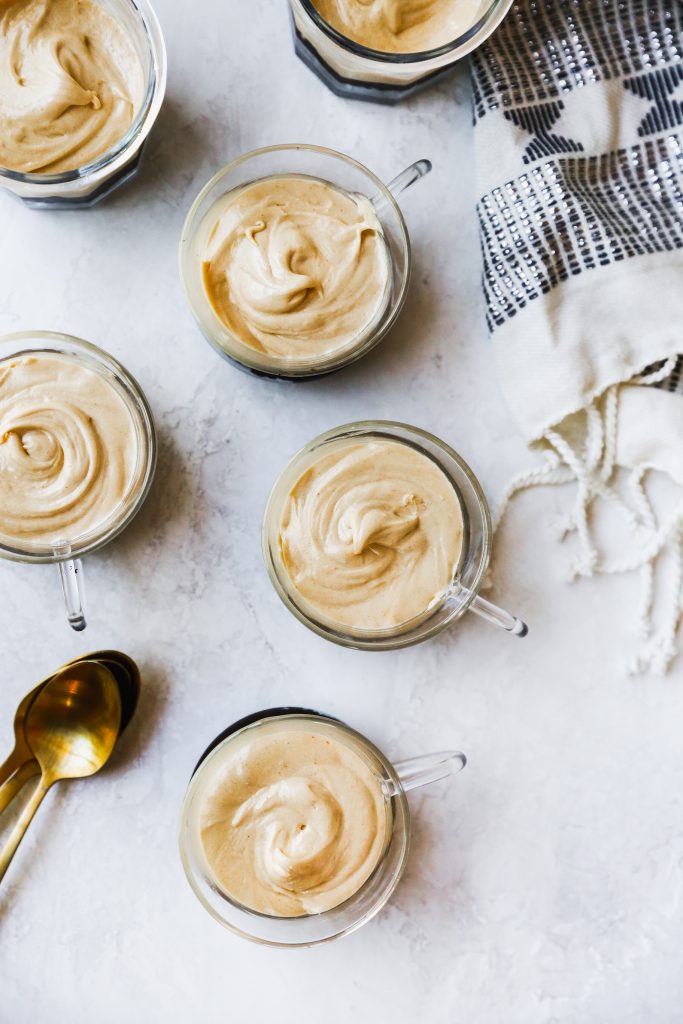 And today’s recipe is the newest addition to my in-honor-of-Dan treats. These no-bake peanut butter chocolate cheesecakes are TO DIE FOR. And that’s coming from someone who almost always opts for something less sweet, less decadent, and often times, something that has fruit involved. These are incredible. 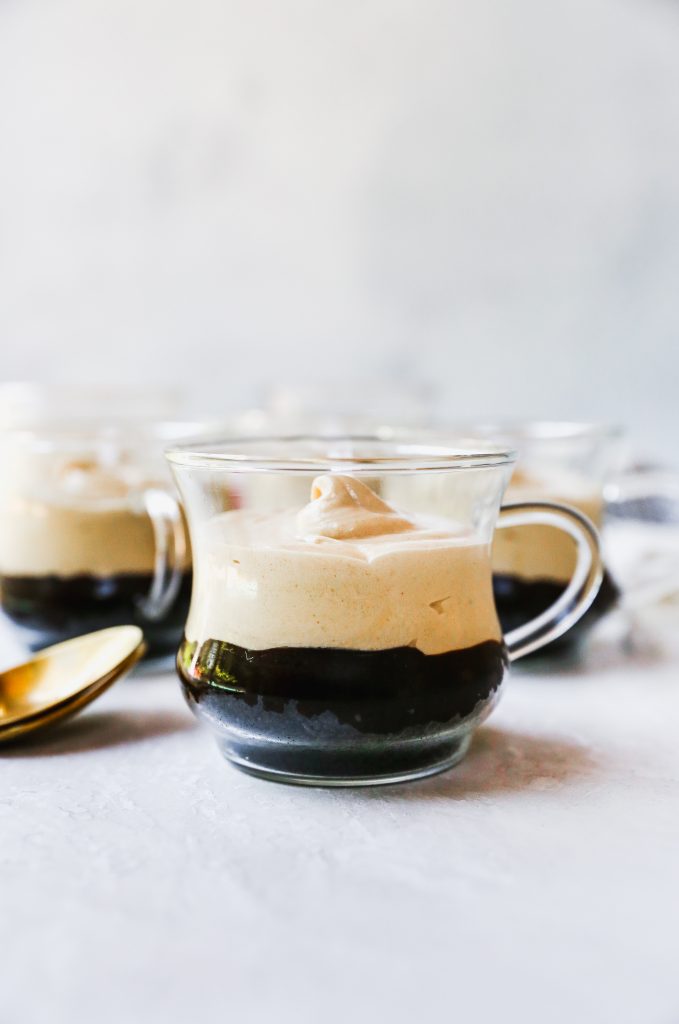 Also, I’ve probably admitted this in the past, but I am not a huge cheesecake person. GASP! I know, I know. It’s not that I dislike cheesecake, it would just NEVER be my first choice in a dessert. So again, the fact that I flipped my lid over these just as much as Dan, really is saying something. 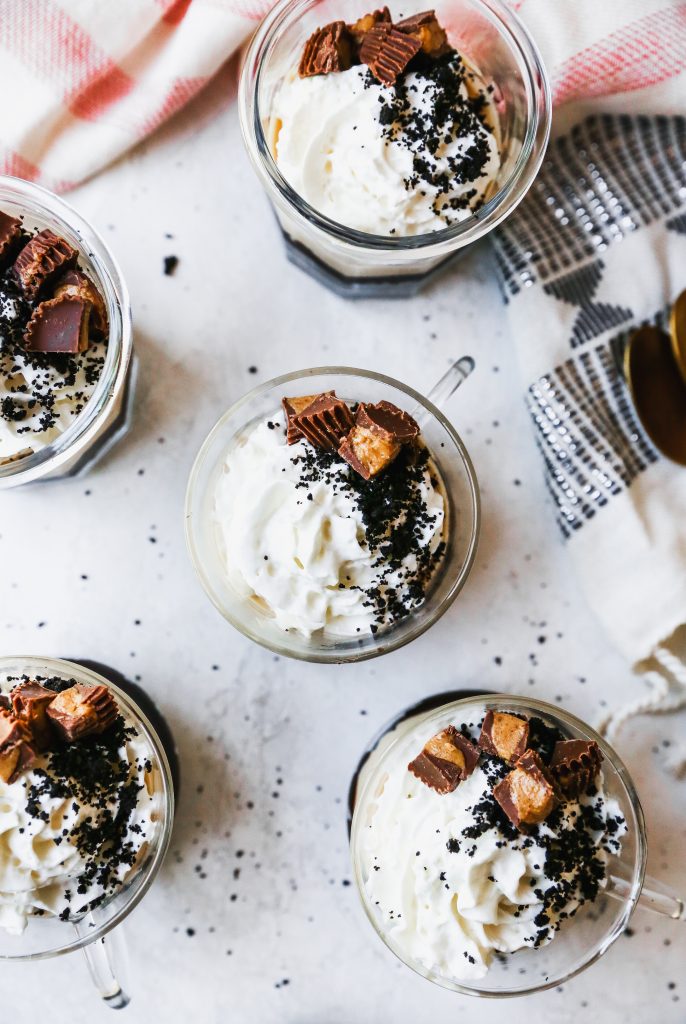 What’s really fun about these is that you can make them a few days ahead and just keep them in the fridge until you need them. If you go this route, I recommend holding off on topping them with the whipped cream (as it will surely melt). These are best served chilled, so it works well if you’re short on time and want to get ahead of things. 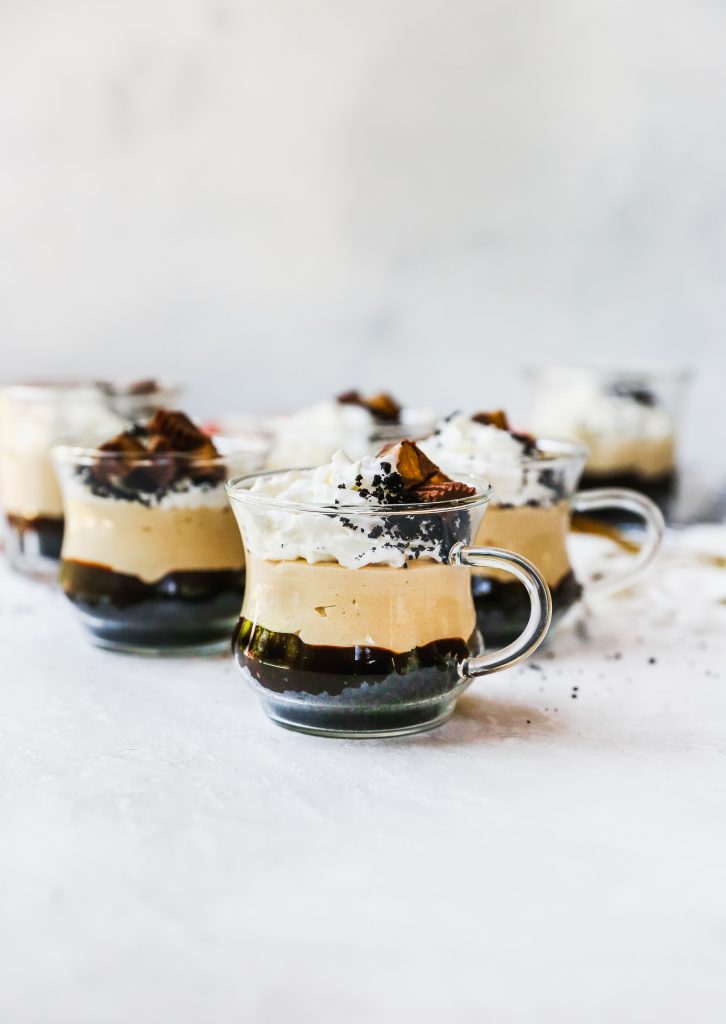 Also! You can make these into one larger cheesecake if you want. I like them in mini form because 1. they’re super cute and fun, and 2. they’re reeeeaaallly sweet and decadent, so I only need a few bites at a time. But! This same method will work in a larger pie pan or springform pan. You’ll need to chill it for longer than the recipe below specifies, but if you’re already making it ahead, that’s probably not a big deal. 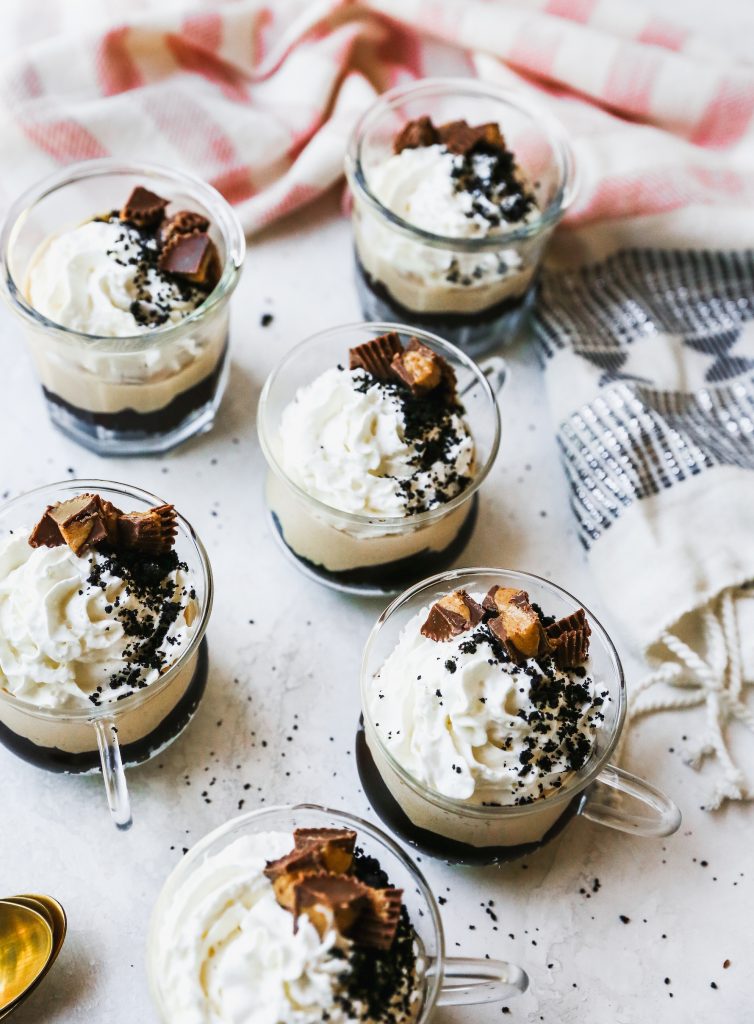 The other thing I love about these, aside from how flippin’ delicious they are, is how EASY they come together. Really. Anyone can do this. There’s no baking involved!

You pulse up some chocolate wafer cookies in your food processor and mix with a little melted butter. Press into your serving containers as a little crust. Easy peasy. 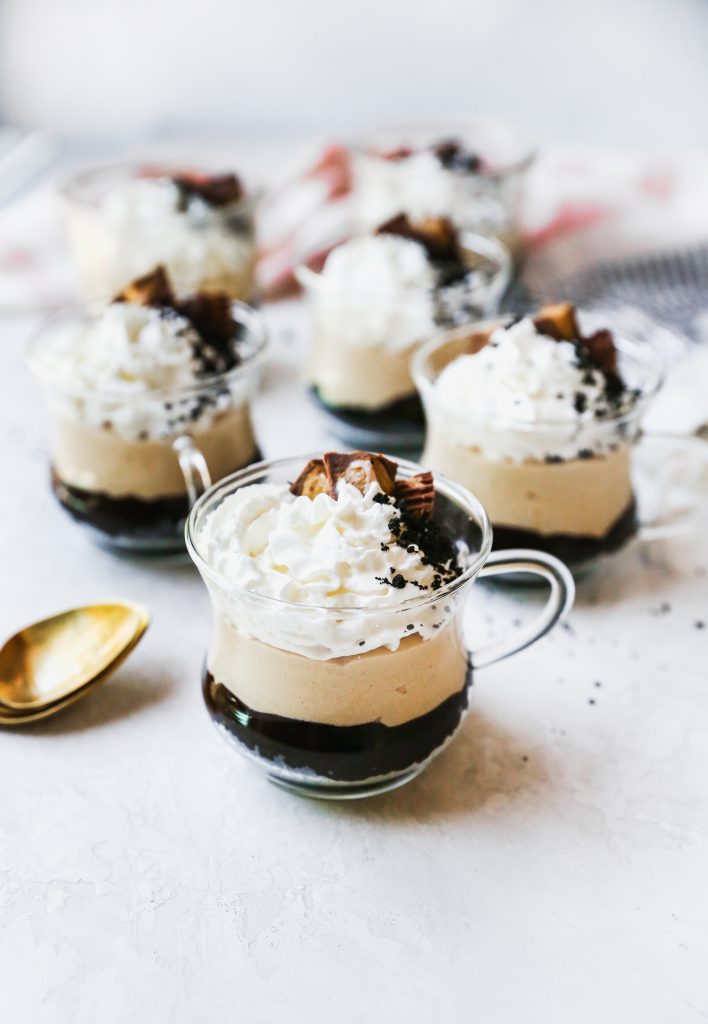 Next, use your mixer to whip together cream cheese, peanut butter, vanilla, a pinch of salt, and powdered sugar until the mixture is soft, fluffy, and super creamy. That’s your filling! Load it into your containers and place in the fridge to set for a few hours.

You’re basically done. See? I told you it was insanely easy. 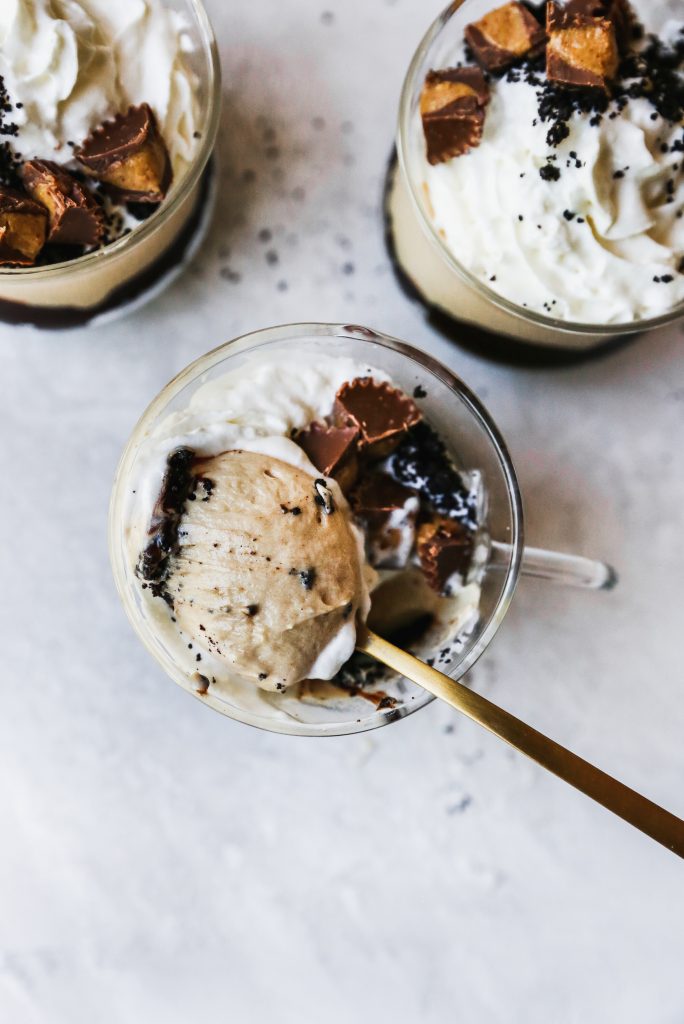 When you’re ready to serve, top them off however you desire! A little whipped cream, some chopped up Reese’s peanut butter cups (OMG), and a sprinkling of those cookie crumbs from earlier. Add in another drizzle of melted peanut butter or chocolate, if you’re feeling it. Switch out the cups for Reese’s pieces. Seriously, you do you. 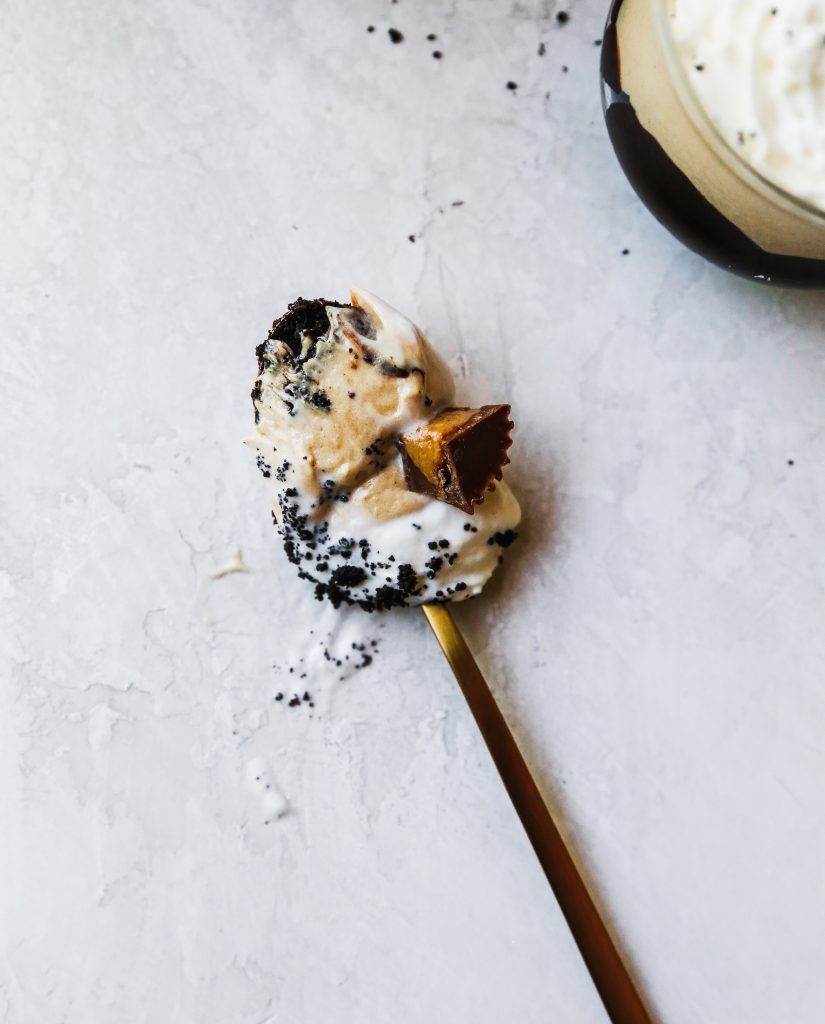 Because no matter how you top these off, they’re going to be fantastic. People are going to flip over these.

And if the dad in your life is as crazy about peanut butter chocolate as Kieran’s dad is, you will be the hero of Father’s Day. 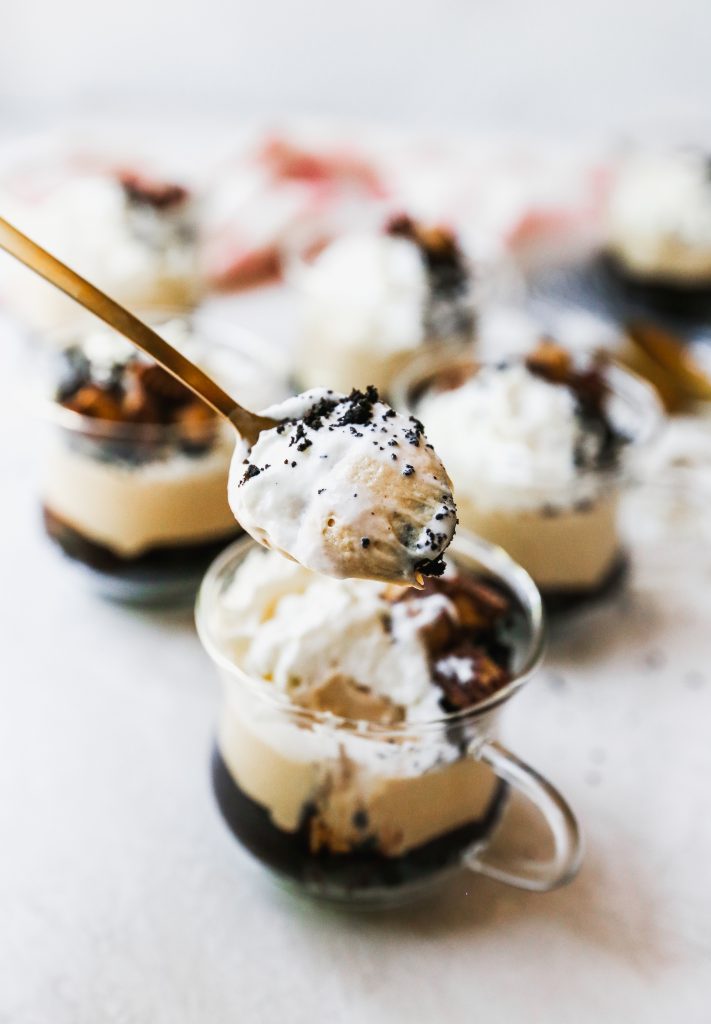